Where were Canadian imagery basemap updates this month? Natural Resources Canada, the Province of Ontario and the City of Toronto are the first of many Canadian contributors to both the raster and vector topographic basemaps.

The imagery basemap on ArcGIS Online was updated this week and last month with new content from Canadian contributors. Camrose, AB provided 10 cm imagery taken in 2015, and this was published last month. Service New Brunswick imagery updates continued with 4 communities in the province covered in 8 cm imagery from 2016. This complements the province’s earlier updates in ArcGIS Online. The interactive map below shows all the New Brunswick imagery that was published in the past year.

And finally, Stormont, Dundas and Glengarry provided DRAPE imagery from 2014. This imagery replaces a patchwork of previously existing imagery with seamless content that covers the entire county. 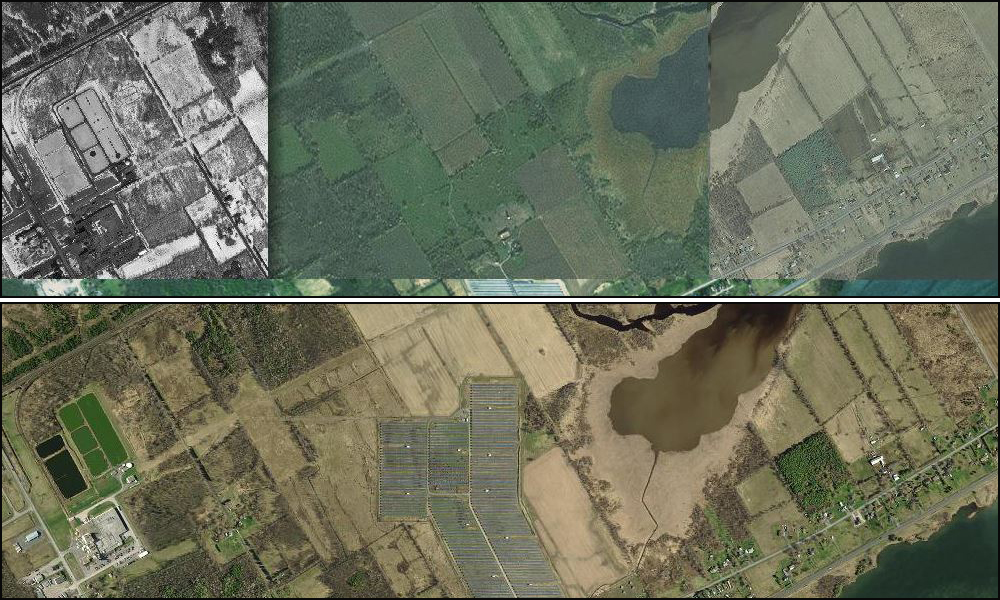 Moving towards a more seamless imagery basemap: DRAPE imagery (below) provided by SDG replaces a patchwork of older imagery (top).

In addition to the imagery updates, there have been updates to the vector tile basemaps. These basemaps have been available on ArcGIS Online since 2015, but, until now, the content has been coming from commercial data providers. Now, with the latest release this week, the vector tile basemaps also include the first content from some of our Canadian contributors. Natural Resources Canada, the Province of Ontario and the City of Toronto are the first of many contributors to have their content appearing in both the raster and the vector topographic basemaps in ArcGIS Online.

Vector basemaps can be accessed through ArcGIS Online by clicking Add > Browse Living Atlas Layers and then selecting Esri Basemaps from the dropdown list on the top left of the dialog. This will bring up all Esri’s basemaps to further refine the search type in “vector” in the search box. You can viewa wide range of basemap styles; all of them draw on the same cached content. The topographic basemap can be found on the second page. Any of these layers can be added to the map as a layer or as a basemap.

In ArcGIS Pro, it’s easy to add a vector basemap. Simply click on the Basemap button and select the topographic option that appears in the lower right (there are 2 topographic options – the other is the standard raster basemap).

The vector basemap functions much the same as the raster basemap. Neither can be selected or queried. But the vector basemap will draw faster and can be rotated while keeping the labels horizontal. In addition, the style for the vector tiles can be modified to suit your needs without altering the underlying content. See Esri UK’s blog post for more details on how to do that. From a production standpoint, vector tiles enable us to produce one map that can be stylized in any number of ways. With raster maps, a new cache must be produced for each different map style. As well, vector tiles are quicker to produce. For more information on the benefits of vector tiles, see this Esri blog post.