Recently we announced the winners and runners-up of the ECCE App Challenge 2021. Yet the competition included apps created and presented by a total of 26 teams. Learn about the creative ways that these teams assembled and presented their projects using Esri technology and open data to address this year’s theme of reducing inequalities.

The Esri Canada GIS Centres of Excellence (ECCE) annually hosts the App Challenge, a competition that invites teams of students from ECCE schools across Canada to create and present applications that they must build within one week. This year is the 7th iteration of the competition since it was first held in 2015, and sets a new record of 26 for the total number of teams to participate in a given year.

Each year, a different theme is identified for the App Challenge and the teams are tasked with using Esri technology with open spatial data to develop a solution that addresses a specific and relevant topic within that theme. For the 2021 competition, the theme chosen was based on one of the United Nations sustainable development goals, specifically Goal 10 that aims to ‘reduce inequality within and among countries’. Teams were required to build applications to address topics related to this theme within a Canadian context.

Selecting a new theme each year sets the stage for a new variety of projects to be created by App Challenge teams. The students can address new topics that haven’t been explored in previous competitions, or they may choose to explore familiar topics with a new perspective. At the same time, Esri’s technology is constantly evolving, changing the range of options available each year to teams in the App Challenge. Many of this year’s teams worked with tried-and-tested tools like ArcGIS Web AppBuilder, ArcGIS StoryMaps, and ArcGIS Survey123 to build apps. However, some of the teams also took the opportunity to work with newer tools and capabilities in the ArcGIS system. Earlier in May, we introduced the teams selected as the winners and runners-up from McMaster University and the University of Calgary. This article will provide a broad overview of how this year’s 26 App Challenge teams used these technologies to create their projects.

While the ArcGIS system is constantly evolving with new tools available for building applications, there are many excellent options that have been well-established and improved incrementally over many years. The most popular tool by far in all of the past 7 competitions has been ArcGIS Web AppBuilder. This year alone, 19 of the 26 total teams used Web AppBuilder in their projects (including the winning team and one of the runners-up from McMaster University). The variety of configurable themes and widgets available in Web AppBuilder ensures that no two applications are alike. For some of the 2021 App Challenge projects, Web AppBuilder was used on its own to build a single main application (11 teams chose this approach, including the runners-up noted above). However, another strategy used by many teams is to combine multiple ArcGIS technologies, with a Web AppBuilder application serving as a sub-component within a larger solution.

One of the Web AppBuilder applications created by the winning team Mac n Cheese from McMaster University, showing proportion of visible minority and indigenous populations relative to air pollution sources.

The next most popular choice among this year’s App Challenge teams was ArcGIS StoryMaps. While Esri is continually evolving the technology behind ArcGIS StoryMaps, it has been a reliable option available to students since the first App Challenge and has been used effectively in many of their projects. This year, 7 teams chose to build story maps. In some cases (e.g., teams from University of Toronto Mississauga (UTM) and Dalhousie University (Dalhousie), the story map itself served as the primary application. Other teams chose to combine it with other ArcGIS tools. Some used a story map as a separate app to complement their main applications by presenting relevant maps and data with a narrative that explains the context of their project. In some cases, teams embedded other applications built for their projects directly within the story map (e.g., teams from University of New Brunswick (UNB) and University of Calgary (UCalgary)). 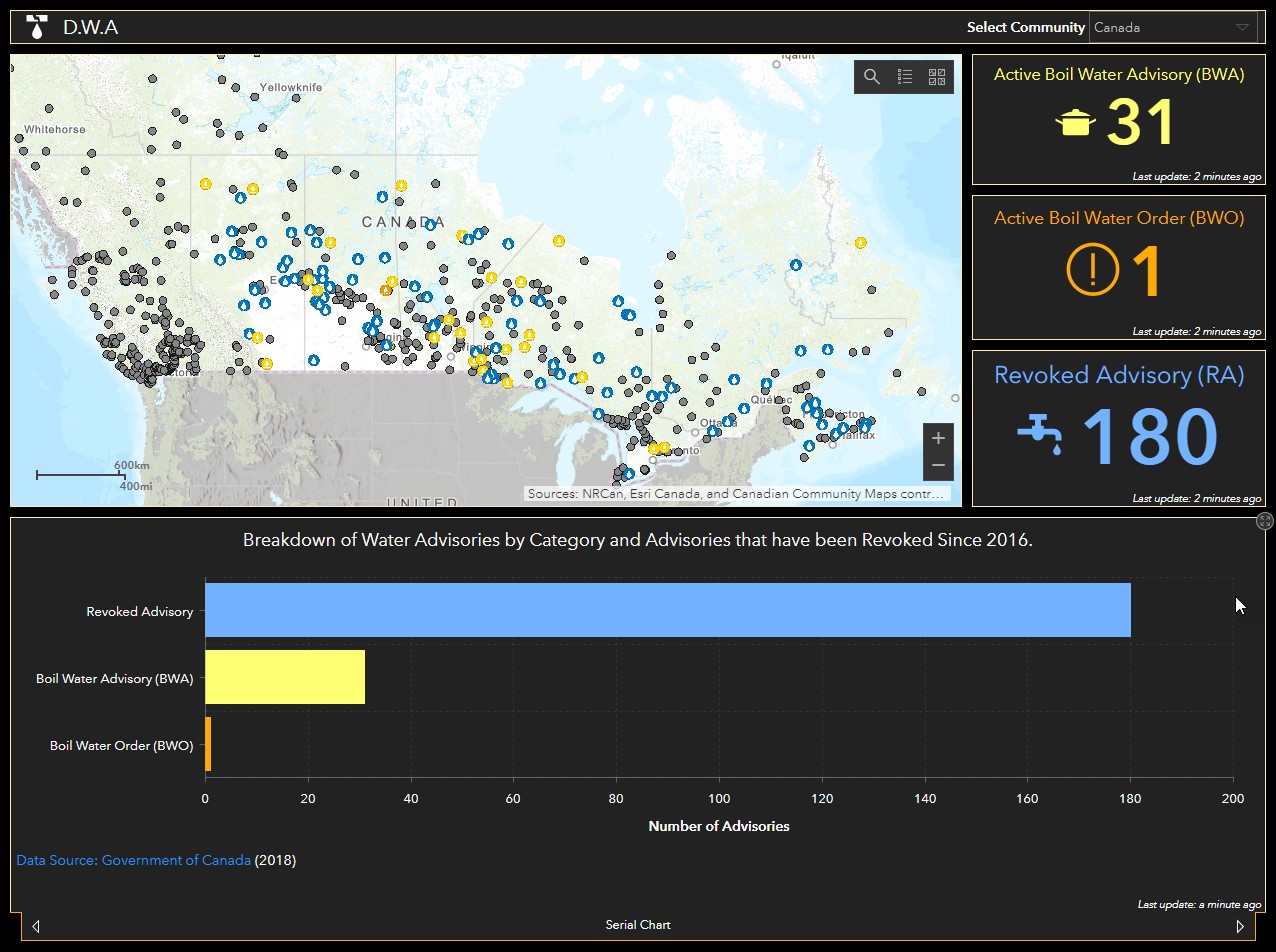 The dashboard for the drinking water advisory app created by the ARCiTechs team from the University of Calgary, which was embedded in their kNOwH20 story map.

In addition to the two most popular tools noted above, ArcGIS Suvey123 and ArcGIS Dashboards are also familiar choices. With Survey123, used by 3 teams this year, users are able to contribute data that can be fed directly into other applications within the same project (a strategy used by teams from Western University (Western), Centre of Geographic Sciences (COGS), and McMaster University (McMaster)). Two teams also chose to work with ArcGIS Dashboards (both of the teams from University of Calgary (UCalgary), including one of the runner-up teams). Like Web AppBuilder, ArcGIS Dashboards makes it easy for teams to build and configure an application that presents useful insights from the open data sources they have compiled for their projects.

ArcGIS Enterprise is similarly a well-established technology in the ArcGIS system that serves as the central component of a Web GIS, much like ArcGIS Online. Most teams will choose to work with ArcGIS Online to host their data, maps, and applications because it is readily accessible and easy to use. However, some types of custom services can only be set up using ArcGIS Enterprise. What makes the appearance of ArcGIS Enterprise relatively rare in the App Challenge is that the time required to learn to set up and configure custom services (e.g., custom locators or geoprocessing tools) is often beyond the scope of the one-week competition. However, two App Challenge teams this year built their own custom services with ArcGIS Enterprise, which they each used to add new functionality to their Web AppBuilder application. These projects include custom locators (used by one of the Dalhousie teams), and a custom image service (used to enable multi-criteria suitability analysis by the team from Simon Fraser University (SFU)).

Towards the cutting edge

With each iteration of the App Challenge, we are always keen to see teams take the latest technologies offered by Esri and put them to use in their projects. ArcGIS Experience Builder is an example that fits in this category. It is Esri’s latest app-builder solution, enabling the creation of modern web mapping applications with virtually any style and layout. It was chosen by two of this year’s team, including one of the teams from University of Waterloo (UW) and the runners-up from UCalgary. Both teams used Experience Builder to create their apps using layouts that embedded interactive maps and apps into an effective narrative.

Another technology that has been rapidly emerging across the ArcGIS system is ArcGIS Notebooks, which enables Python or R code to be written and executed within a document, interlaced with rich text, and multimedia, alongside interactive visualization of data inputs and analysis outputs. With teams in the App Challenge mainly focused on developing user-facing applications, ArcGIS Notebooks hasn’t yet been a common choice. However, it can be an effective way for students who have plenty of GIS experience to showcase their underlying work in preparing data and services used in the apps that they build. This was the approach taken by the runners-up from UCalgary, who used an ArcGIS Notebook to present the data processing they performed to prepare the datasets that they used in their Experience Builder application. Their notebook is presented embedded in a second Experience Builder app that provides the story behind their project.

Of all the Esri technologies used by students in the App Challenge, one of the most notable is ArcGIS Hub. Although it has been available for a while, it has not been used by any teams in the past. This year we have two teams that used ArcGIS Hub to build and configure sites for their projects. This includes one of the Western teams, whose site provides information and resources, in the form of maps and integrated surveys, to help new immigrants situate themselves and find employment in London, Ontario. This year’s winning team from McMaster also used ArcGIS Hub to build their site, with useful information and embedded Web AppBuilder applications, to highlight issues related to air pollution and its unequal impact on different populations in Canada. 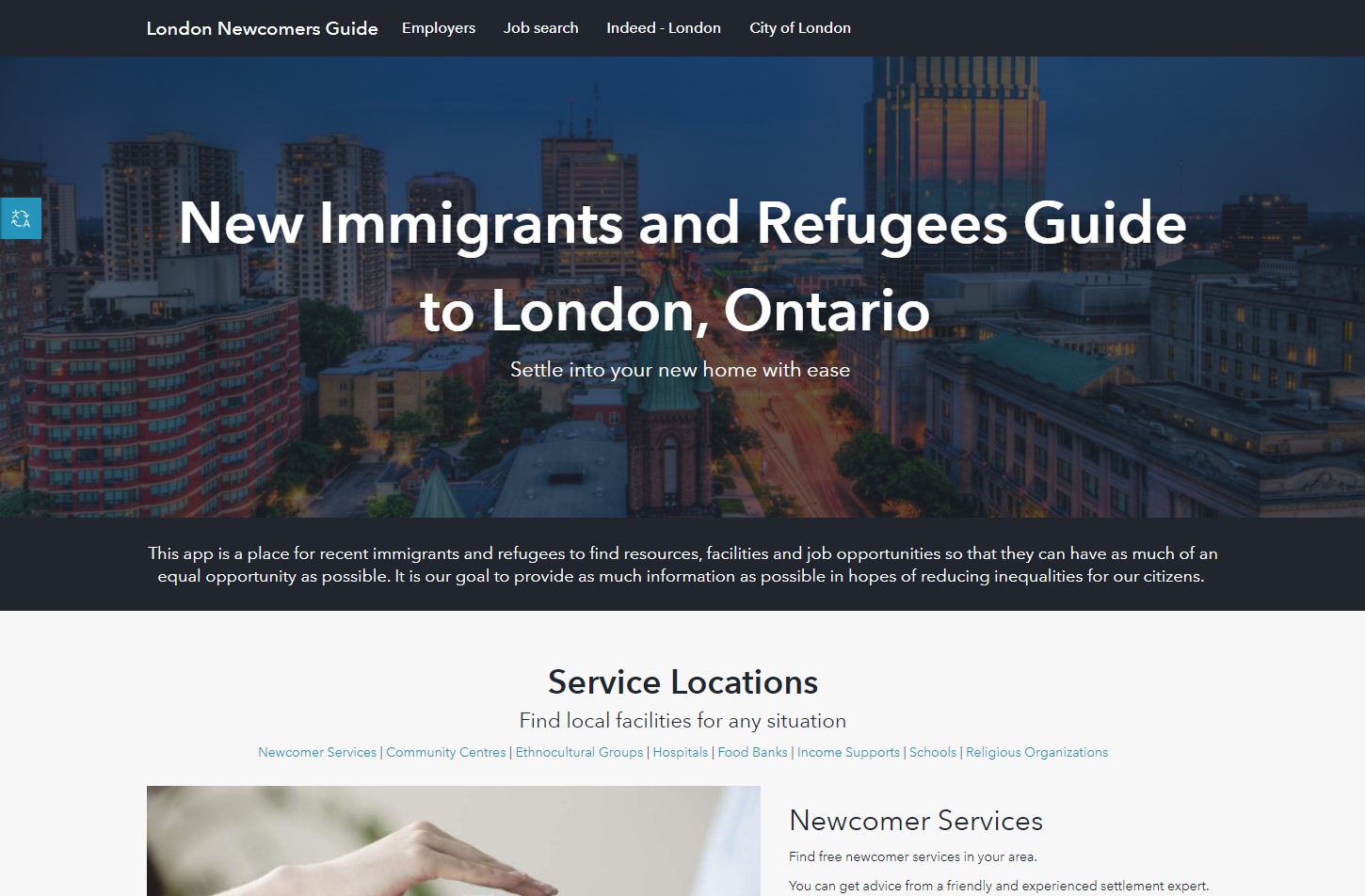 With only one week available to work on projects for the App Challenge, often the best choice for a team is to work with one of the many options available in ArcGIS to build excellent applications through configuration only (without writing any code). In addition, with all students required to participate remotely this year, writing custom code as a team was even more challenging. At the same time, ArcGIS Online served an even greater role as a medium of collaboration between team members, making it easier to work effectively with the configurable options for creating apps. However, many teams this year still found creative ways to incorporate some form of customization in their projects. An approach used occasionally in the past, and by 6 of this year’s teams, is to build a custom HTML web page that serves as an entry point to present the project, with the main application linked or embedded within it. The runners-up from McMaster are an example of this approach. Another creative example by one of the COGS teams uses a custom web page with a map-style menu for selecting languages in different countries before launching their main Web AppBuilder application with the corresponding locale enabled.

One team from UW broke the mold this year and took the fully custom-developed route for their project (an approach that has been equally successful for teams in previous years). What’s particularly unique with this team’s approach is that they started with prior experience having developed web applications with third-party technologies. Using an ArcGIS Platform API key, they were able to bring mapping functionality into their app using ArcGIS Online data and services and application components provided by the ArcGIS API for JavaScript. The result is a unique application for assessing food deserts in the Niagara region. 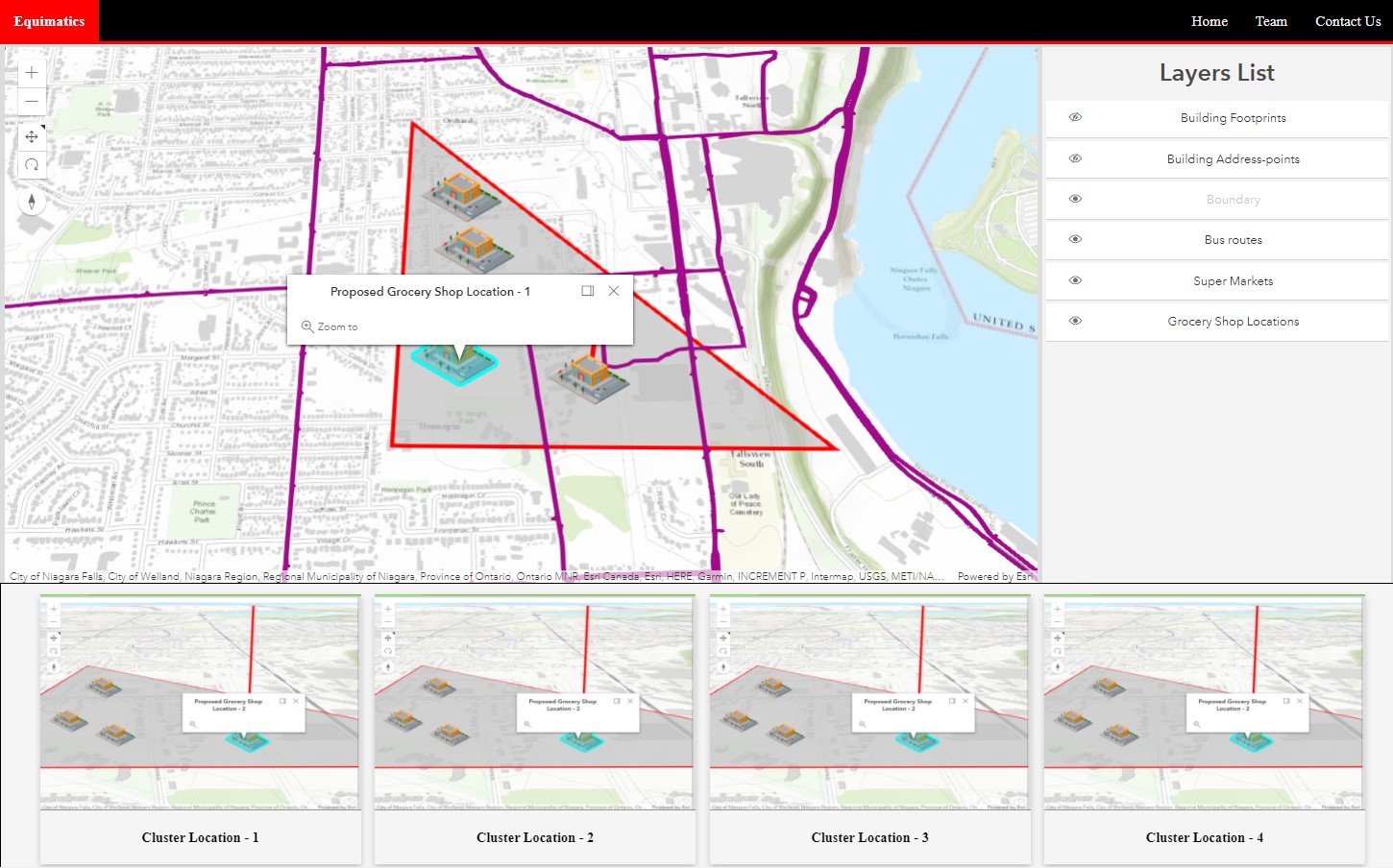 The Food Desert Solver app created by site created by the Equimatics team from University of Waterloo.

This article has mainly focused on how this year’s App Challenge teams worked with various components of the ArcGIS system to build each of their apps. However, the range of topics that were chosen to align with the theme of reducing inequalities are just as unique and interesting. Altogether, they highlight the inequalities that continue to affect people in different ways throughout the country, despite the relative prosperity and quality of life that most Canadians enjoy. It is worthwhile to take time to explore the projects presented by each team, and to learn about these persistent forms of inequality that continue to be felt by many Canadians.

Overall, this year was another great success for the App Challenge, and we congratulate every team that participated. We look forward to seeing many of these students back again with their peers for the next year.