Each year, Esri Canada GIS Scholarships are awarded to students at institutions across the country with strong GIS programs. While the majority of recipients are in geography, geomatics or related programs, a small number are enrolled in programs that are not traditionally associated with GIS. Read about one such recipient, Emily Acheson, who is completing her Master's in Biology at the University of Ottawa.

As the weather gets warmer and Canadians start spending more time outside, they will almost inevitably get bitten by something. But while mosquitoes and other bugs are mostly just a nuisance here, in other parts of the world they can carry deadly diseases.

In epidemiology, small organisms like mosquitoes and ticks that can transmit infectious diseases are called vectors. Vector-borne diseases include diseases that are present in tropical and sub-tropical regions, such as malaria and Dengue fever, as well as diseases that are slowly creeping into northern regions, such as West Nile virus and Lyme disease. Emily Acheson's research focuses on how climate change and other environmental changes affect the distribution of disease vectors.

Emily says she has always been interested in biology and thought about a career in veterinary and human medicine. However, after gaining some experience in those fields, she became fascinated with diseases. During her undergraduate program at the University of Toronto (specialist in Biology, major in Environmental Science and minor in Professional Writing and Communication), she became interested in GIS through a few GIS courses. Studying disease vector ecology allows her to combine both these interests. 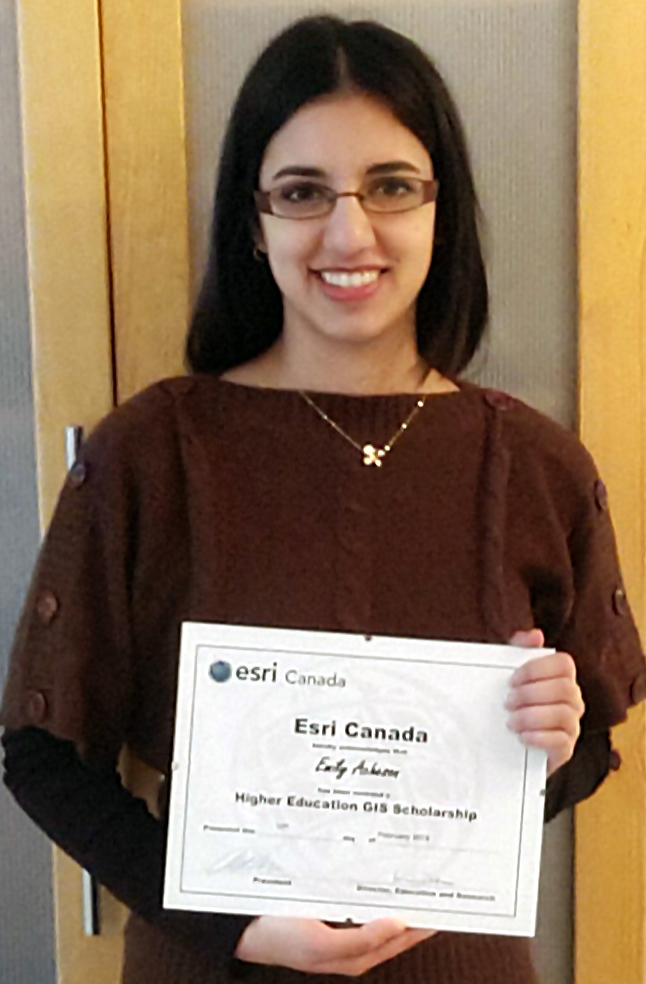 The poster that Emily submitted for the 2015 Esri Canada GIS Scholarship is based on the main research paper for her Master's degree in Biology at the University of Ottawa. It compares habitat suitability for Anopheles mosquitoes, which carry malaria parasites, in Tanzania in 2001 and 2011 to try to determine if distributing insecticide-treated mosquito nets is effective in preventing malaria. Her approach is based on the macroecology work of her supervisor at the University of Ottawa, Dr. Jeremy Kerr, who helped found eButterfly, an online tool for butterfly data.

Output from Maxent — a species habitat modelling software program — of predicted habitat suitability for Anopheles mosquitoes in Tanzania in 2001 and 2011. ArcGIS software was used to prepare the input layers and to help analyze the results.

According to Emily, "GIS skills are becoming increasingly crucial in areas of disease vector ecology because experts are needed who not only know about the ecology of these arthropods but how to process large satellite datasets in computers and draw results from them for human health benefits."

Emily is currently looking at the change in distribution of tsetse flies, which carry sleeping sickness, in East Africa and will be starting a PhD in the fall at the University of British Columbia. Winning an Esri Canada GIS Scholarship means she will always have access to ArcGIS software to continue her research.