Every year, students from around the world who have been selected as their country’s Esri Young Scholar travel to San Diego to attend the Education Summit and Esri User Conferences. For Canada’s Esri Young Scholar Anne Provencher St-Pierre, it was a rewarding experience to meet, share with and learn from this diverse group.

Esri Canada’s Esri Young Scholar competition attracts students from across the country at all levels and from a broad range of fields. This year’s winner is a marine biologist who is the only person in her research lab who uses GIS daily, so attending the Esri User Conference and the Education Summit @ Esri UC was an enlightening experience for Anne Provencher St-Pierre. She was one of more than two dozen students from around the world who were honoured this year with the Esri Young Scholars Award. I asked her via email to tell me about her experiences at the UC and about her research.

Esri Young Scholars come from over 20 different countries. How did you feel meeting the other winners?

It was such an amazing experience! We all met on the first day and stuck together through the week. It was great to meet such interesting (and interested!) people, and we enjoyed hanging out together at the various events. It was also great to have some familiar faces in the sea of people during the conference.

We shared experiences about how we learned to use GIS and how we are applying it in our different fields, which was super interesting. It was also quite rewarding to share with the other scholars because we all had different backgrounds and different research areas, and it led us to learn a great deal from each other. I do hope we'll be keeping in touch! 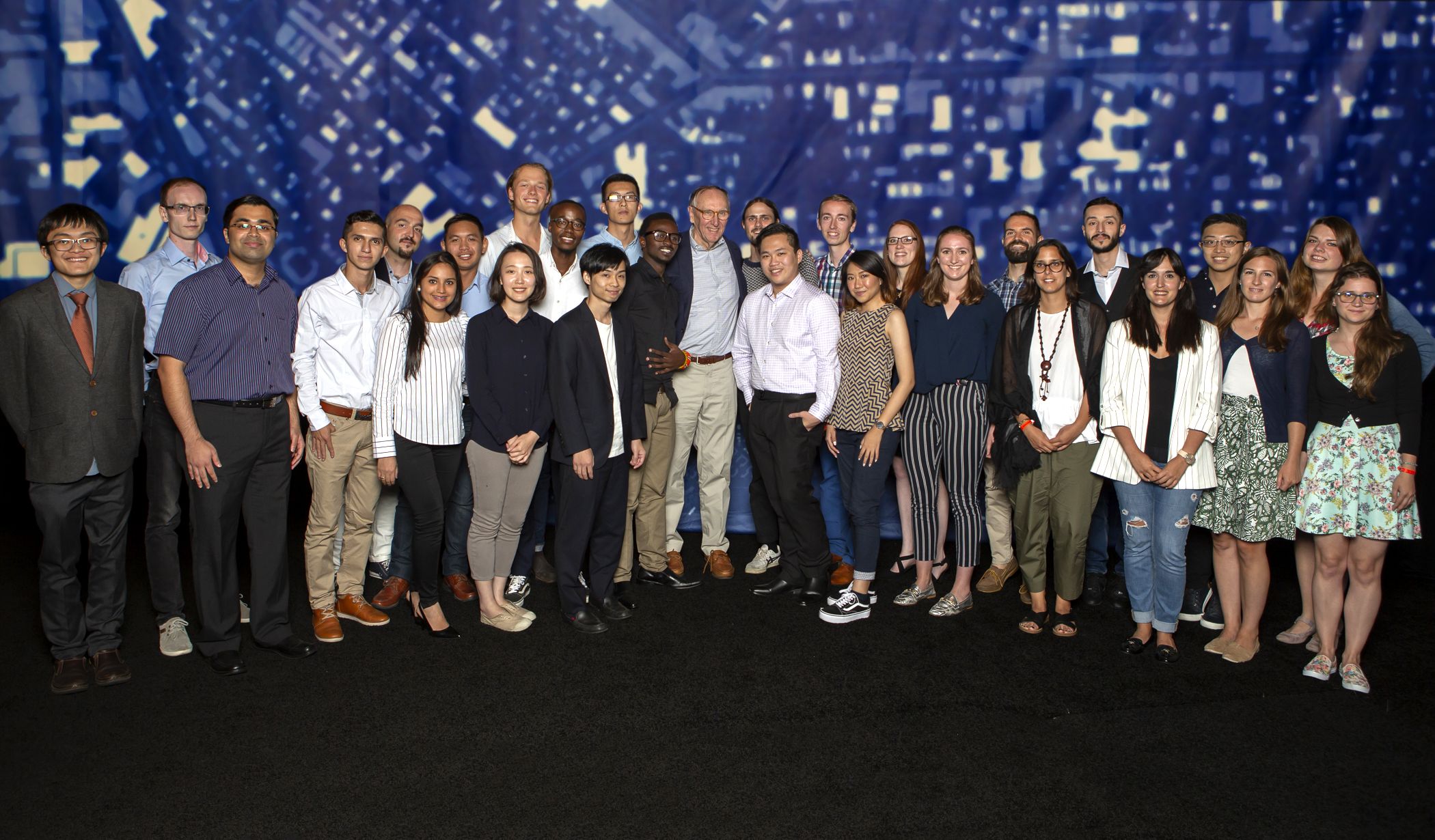 The 2018 Esri Young Scholars pose for a picture with Jack Dangermond after the Esri Award Ceremony.

What were your overall impressions of the Esri UC and Education Summit?

I've been working with GIS for a couple of years, but I'm the only one in my research centre who uses it daily. So for me, it was rather personal to work on; it was a something I would do by myself in my office. Getting to the Education Summit and the Esri UC changed that completely. I discovered that the GIS community is so large and so diverse. Every day, and often several times a day, I found myself saying "Woah, I had no idea you could do that!" I learned about people applying GIS in ways I would never have thought of while working on my own projects. I found both conferences to be intense, as there were so many interesting things going on that you could always find an event or a talk that would inspire you to do more, to learn and to collaborate.

Were there any sessions that you found particularly useful or interesting?

Being a marine biologist, I had a particular interest in the ocean mapping sessions. I was amazed at the technology that is being applied to study our oceans, either by mapping the bottom of the ocean in remote areas, by using drones to measure corals both from above and below the water's surface, or by studying the properties of the water column at broad spatial scales to enable us to better predict changes and protect ecosystems. Meeting with Esri's Chief Scientist Dawn Wright and attending the Science Symposium were definitely great moments for me.

I'm starting to learn Python, and I found sessions and demos about Python coding pretty useful. However, I have to give the prize of “most useful and interesting” session to the spatial data mining workshop, which I attended on the first day of the Education Summit. About two minutes into it, I remember starting to frantically take notes as I realized that the analyses they were presenting were exactly what I would be needing in the next chapter of my thesis!

Can you tell me more about the project you submitted for the EYS competition?

The project I submitted is one of the chapters of my PhD thesis, in which I am studying the distribution of kelp, which are large brown seaweeds, in the northern Gulf of St. Lawrence. For this particular chapter, I'm interested in looking at both spatial patterns and temporal trends, and I explore how those change with variations in environmental conditions. I'm using a time-series of images from the Mingan Archipelago to detect the presence of kelp beds, and some of those images date all the way back to 1983. The tricky part is that the kelp are completely submerged unlike the giant kelp you'd see on the pacific coast for example. Detecting their presence from imagery is rather hard, and very few studies have been done to understand how they change at a seascape scale in Eastern Canada. For my project, I'm applying spatial pattern metrics to quantify the change in kelp distribution patterns, and then correlating it with variations in oceanographic and atmospheric conditions (like temperature trends, presence of ice or the strength of the North Atlantic Oscillation index).

Study areas for detecting kelp beds in the Mingan Archipelago.

What are you hoping to do after you complete your PhD, and do you think it will include GIS?

While I know I will continue doing scientific research after my PhD, I'm not yet certain if I want to continue in academia or if I want to go into other avenues. I do hope, however, that I’ll be continuing to use GIS technologies along the way. I’m particularly interested in continuing to learn about remote sensing and image interpretation to see how we can use it to better understand the world we live in and protect it. I find that remote sensing and GIS are such powerful tools, and I hope to continue using them to push our understanding of our oceans.

This was the second time you had applied for the Esri Young Scholar Award. Do you think your previous experience helped you at all this year and/or do you have any advice for students thinking of applying next year?

When I applied last year, my project was in its infancy, and, although I had a lot of ideas, I was not very far along. I think the experience of applying a first time helped me in putting my ideas together and seeing the steps to get to my goals. The first attempt definitely helped my thesis work move forward! What I found very helpful was to go through the posters of the other participants before applying again this year.

One bit of advice I could give is to focus on the part of your research that you find is the most interesting, but to remember that not everyone is in the same research field. While I was presenting my poster at the UC, I had people with very different backgrounds asking me questions, which meant sometimes my answers aimed at really boiling down certain points, but, at other times, it was very technical or specific. I think it's something to keep in mind while preparing your poster, so that it can be accessible and interesting to a wide range of people because good advice and good ideas could come from discussions with people in different fields, as they bring a new perspective.

Congratulations to Anne and to the other top ranked students in the 2018 competition! Their posters will be on display at a few Esri Canada User Conferences this fall and can also be viewed online.