Throughout the year, we’re featuring 12 interesting and diverse customer-developed apps in our blog and on our Web Site home page. January’s App of the Month is the City of Hamilton’s story map journal, Invest in Hamilton. This easy-to-use, interactive app was configured by the City to mash up a wide range of content—including infographics, videos, pictures and maps—to showcase the economic opportunities that Hamilton offers to businesses and international investors. 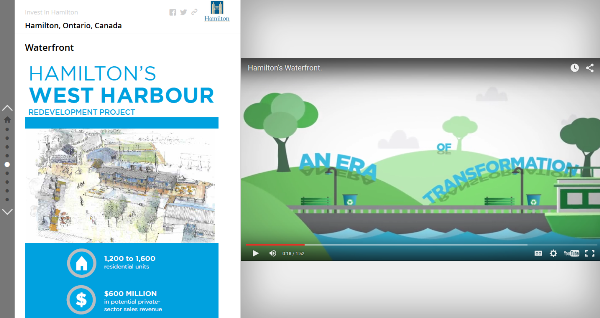 Like all good story maps, Invest in Hamilton tells an engaging story with a nice balance of concise text and high-quality graphics and videos. This format was strategically selected because the app was created primarily for the 2015 MIPIM Conference last March in Cannes, France. This four-day conference attracts over 20,000 people from different countries and areas—including developers, investors, and local and public authorities—to participate in one of the world’s biggest property market showcases. Hamilton’s Economic Development Office exhibited at the conference to promote the city’s status as one of Canada’s top places for investment, and the app was front-and-centre at their booth. 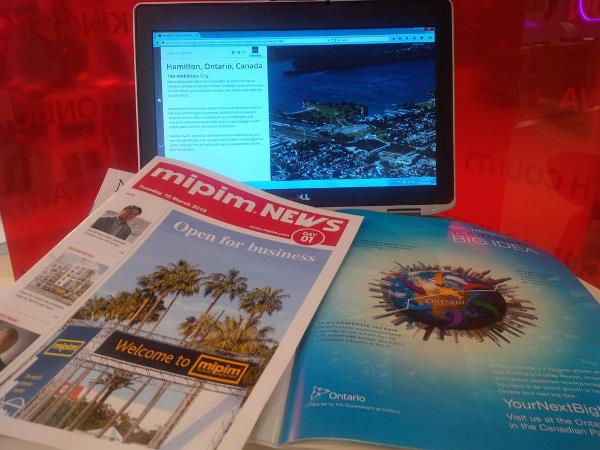 The app on display at Hamilton’s booth at the 2015 MIPIM Conference in Cannes, France.

According to the app’s creator, Burke Thompson, a GIS analyst with the City of Hamilton, Invest in Hamilton was created specifically with the event and its audience in mind. The app’s user-friendly and visually compelling format allowed booth visitors to explore the story map on their own—switching between different areas to quickly digest information in a variety of ways. They could explore maps, watch YouTube videos, glean statistics in graphs and learn about featured partners—such as John C. Munro Hamilton International Airport and McMaster University—in infographics.

Sue Rimac, a Business Development Consultant with Hamilton’s Planning & Economic Development Department, said the app helped Hamilton stand out from the crowd during the conference. Visitors to the booth regularly spent time exploring the app because it offered a refreshing break from the familiar, looping PowerPoints we’ve all seen on tradeshow floors. In fact, people from other economic development offices were keen to know how Hamilton created the app.

To date, the app has received 1,500 unique views, which has exceeded expectations. Also, the Office has submitted the app for consideration for an award with the Economic Developers Council of Ontario (EDCO).

The app’s success extends beyond its ability to help attract economic investment. It’s also helping the City’s Spatial Solutions Services section in its IT Department promote the fact that GIS is more than plotting points on a map. It’s a successful example of how ArcGIS Online and its configurable apps can be used to integrate information for departments throughout the City. At an internal event to raise awareness about GIS, the app was on display for various departments to see and try out. For many internal staff, Invest in Hamilton was an eye opener that helped them understand and appreciate the possibilities that GIS technology offers.