At this time of year, it’s been a tradition for industry pundits to review the significant accomplishments of the past year and predict what’s going to happen in the new year. Let’s look at some of these predictions to get some insight into what 2016 has in store for the Canadian GIS community.

So it’s that time of year. Industry experts have already made several predictions about technology and business for 2016. Most of these predictions are positive and call for newer, bigger and better things to happen in the new year. So, where do we start analyzing these predictions?

Because of the close interaction between GIS and information technology, let’s start with Computerworld’s IT predictions. They predict a general rise in tech spending with additional spending on the Internet of Things (IoT) and not surprisingly, reduced spending on wearable technology. They’re also predicting increased IT spending in five areas: security, cloud, analytics, mobile and virtualization. The primary business drivers for these improvements are: improved service delivery, new revenue, increased productivity, improved customer satisfaction and requirements to meet security and privacy compliance. 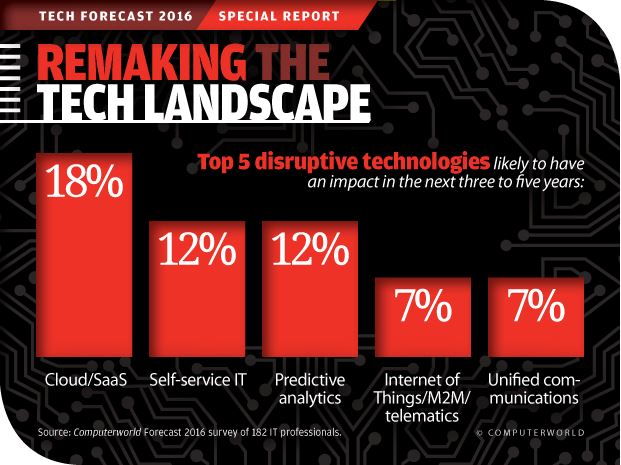 An interesting item is Computerworld’s prediction about the 5 disruptive technologies over the next three to five years, which include: cloud, self-service IT, predictive analytics, IoT (which includes geomatics) and unified communications. The fact that geomatics is included within the IoT category isn’t really a surprise as technology such as LiDAR, GPSs, UAVs and mobile apps have been and continue to be disruptive technologies; plus they also meet the general criteria of an IoT device. (Image courtesy of Computerworld)

Esri president Jack Dangermond sees geomatics as part of the IoT space. During a recent interview at an IoT event, he told a story about a car company that announced a program to build 1,000 smart cars. The smart cars would share information with other vehicles to warn them about slippery road conditions. Jack noted that location is not initially important to the car upon sensing the slippery conditions because it can adjust without this information. However, warning other cars about the hazard requires knowing where the hazard is, as well as the other vehicles’ proximity. Thus, location and geo-analytics transform this sensor data into actionable intelligence. Jack noted that only by understanding the location of the slippery road segment can other vehicles determine the relevance of the warning to their planned routes.

For the 2016 IT growth area predictions, everyone knows that system security, especially for an SDI, is very important. Even if there’s security currently in place, constant monitoring is a necessity. Also, continuous review and improvement of security features is always a good idea. While there haven’t been any recent high-profile hacking events on SDIs that I’m aware of, there have been many IT-related hacking incidents including credit card/personal information thefts and denial-of-service attacks. This goes without saying that one must always be vigilant with their SDI!

Cloud computing is predicted to continue development in 2016, and in Canada, it’s likely that many of the large IT companies will begin providing Canadian-based cloud computing services. The federal government is also likely to jump into the cloud computing space in a big way this year. Once the federal government converts more applications to the cloud, the provincial governments won’t be far behind. Cloud computing technology provides a huge benefit to SDIs as it makes it so easy to bring both spatial data and applications closer to users and potential users while reducing the cost of delivering these services. It also helps bring GIS visualization and analytics to a broader number of users.

While business analytics use is expected to grow in 2016, the rise in geospatial analytics use can be expected as well. All levels of government are using geospatial analytics more each year for activities such as planning, land administration, public works, elections, emergency dispatch and crime fighting. Businesses are also growing their use of geospatial analytics for marketing, insurance, real estate and retail. In Canada, while the oil and gas/energy industry is not expected to grow much in 2016, many other utility businesses such as electricity and telecommunications are foreseen to increase their use of analytics to improve distribution, monitoring and maintenance decisions.

As we’ve seen over the past decade, people like to take their computers with them, so there will be continued growth in the mobile space in 2016. For example, ArcGIS Online works with downloadable generic and configurable apps that allow users to access online maps wherever they are, at any time. Also, the browser on most mobile devices allows users to discover content, collect and report data, and perform GIS analysis. Collector for ArcGIS continues to grow in use as it allows users to collect important spatial data in the field. Most Esri-networked products support the use of mobile devices through the user interface and this is expected to continue and improve in 2016.

Finally, virtualization, which has become a popular technology to use in the IT space, is predicted to continue growing in 2016. However, I see limited additional benefit to the geospatial community in using virtualization other than for the same benefits seen in IT, such as helping to move things to the cloud, extending the life of older applications and increasing uptime.

The pundits see 2016 as a continuation of improvements in the IT world and in the GIS world. Perhaps some game-changing technology will debut in 2016, but who knows? One thing’s for sure: 2016 won’t be a dull year as GIS and SDI technologies change and evolve both here in Canada and across the globe. All the best for 2016!