Growing up in Australia, Patrick Droste saw Canada as a totally different world. After a few years of travelling, and skiing, he settled in B.C. with his wife and soon found a job with the B.C. Wildfire Service. He is currently enrolled in the Advanced Diploma in GIS program at Selkirk College, where his complex ModelBuilder model to assess wildfire risk for buildings helped him win an Esri Canada GIS Scholarship.

Every year, beginning around February and ending in April or May, close to sixty participating institutions send me their nominations for the Esri Canada GIS Scholarships. Most only provide the name and email address of the student selected by their scholarship committee. However, some also include the reasons why the student is being nominated. When I read the nomination from Ian Parfitt, coordinator for the GIS program at Selkirk College, I immediately knew I wanted to learn more about the student and his work: “[Patrick Droste] did an amazing project looking at the fire risk to rural homes using LiDAR data – he was able to pull buildings out of the unclassified LiDAR data and then estimate various fuel types close to the buildings to estimate risk, all using ArcGIS Pro. He developed one of the most complex models in ModelBuilder that I have ever seen as part of the process.”

I contacted Patrick via email to ask about his model, the research project for which he created it, and what led him to study GIS.

The model you created in ModelBuilder for your wildfire risk assessment project is very complex. How long did it take you to develop it?

The full project was completed over the course of a semester and I see the model as more of a documentation of the workflow. I originally laid out a model of the tools and processes I expected I would need to complete the project, with no parameters filled in, as more of a planned workflow for myself. I then started working through the workflow, running the tools one step at a time as I filled in the required parameters and added or substituted tools as needed.

I think if a project requires a lot of geoprocessing, there is no reason not to build it in ModelBuilder as you go. You get a nice documentation of your geoprocessing, and you can repeat the whole process in one click.

How long does it take to run the model?

I have not yet run the model from start to finish. I bit off quite a bit of work for the time constraints of the project and running sections as I created them then moving on allowed me to complete it in time. In the end, those last processes were completed manually, with the intention to go back and simplify them via an iterator.

Many of the processes are actually fairly quick. The two long ones are classifying LiDAR building points and creating point features from slope and aspect rasters, which makes sense given the study area. Both rasters used 2x2m grid cells so about 3.7 million point features were created for both slope and aspect. Each of these two processes took somewhere in the range of 5-8 hours to run. Overall, I believe the entire tool will run on an area the size of the study area in around 12 hours, which is still significantly faster than sending field crews to assess each property!

Did you find that there were any limitations to using ModelBuilder for your project?

Where I ran into problems was toward the end, where I am performing many joins and calculating statistics on joined fields. ModelBuilder seemed to not like using the outcome of a join as an input for subsequent steps, given that joins are temporary. This was easily fixed by adding an export data step, however there may be a better way around this. I didn’t quite have the time to find it. I also think that the series of joins and calculations could be completed with an iteration, looping over the vegetation classes. This will be the next step to investigate to simplify the model.

In the story map that you completed for the project, you note that points returned from thick forest were mostly from the canopy (more than 3 m above ground), with few points from ladder (1 - 3 m above ground) or surface vegetation. From what you know of LiDAR systems, do you think airborne scanning would be able to produce the data needed to accurately assess the fire risk to buildings?

Yes. In the B.C. FireSmart™ guidelines, the critical areas for surface and ladder vegetation around buildings are Zones 1 and 2 (1.5 – 10 m and 10 – 30 m, respectively). It’s recommended that all trees be removed from Zone 1 and that trees have a canopy spacing of at least 3 m in Zone 2. LiDAR will easily detect the presence of trees within the Zone 1 buffer and could be used to test for canopy spacing in Zone 2. If thick canopy is detected in these areas, the building is assessed at a very high risk. While LiDAR may not be able to detect surface and ladder vegetation in Zone 3 (30 – 100 m), continuity of canopy fuels is the predominant concern for wildfire risk and that can very accurately be captured by LiDAR.

My goal for this project was to test the viability of the method. I knew that given the time and resource constraints, I had to have limits to what I was testing. For example, using a single buffer around buildings, as I did for the project, is too general to assess risk. The next steps would be to include a series of buffers for each building in following with FireSmart guidelines.

I should also note that I don’t intend for this tool to provide a complete picture of property risk. The key really is that risk assessments could be conducted automatically, very quickly, over large areas. Once high-risk properties are identified, they can be prioritized for mitigation strategies or further assessment. 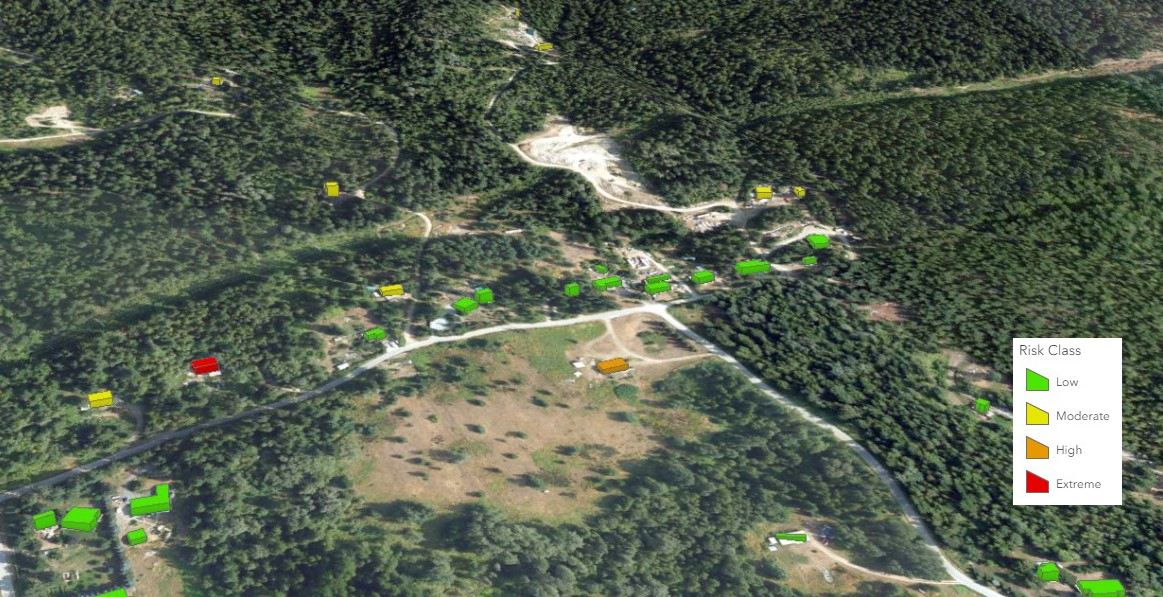 The risk assessment tool identifies buildings and classifies them as being at low, moderate, high or extreme risk from wildfires based on information extracted from LiDAR data.

What led to your interest in wildfires?

My wife and I moved back to Canada from Australia in 2017. B.C. was then facing one of its worst fire seasons on record and we had several large wildfires very close to home. I found myself obsessively reading reports and checking out fire maps, and wondered who these people were fighting fires in steep, mountainous terrain. With my background in mountaineering and endurance sports, it seemed like a dream job to get paid to be out in the backcountry working hard with friends. I applied with the B.C. Wildfire Service the next season and landed a spot on a great crew out of my local area (Nelson, B.C.). It turns out it really is a dream job. It’s hard work, but you are rewarded with a dynamic, challenging environment, where you travel to beautiful, remote corners of the province, and spend your days in the forest with a crew of people that come to feel like family. And you get to use maps!

Why did you decide to move to Canada?

I grew up in South East Queensland, Australia, where our winter days get down to a chilling plus 20°C. Canada always seemed to me like a totally different world, something I could only see in movies, so once I graduated from university, I left right away to spend a winter ski season here. That season turned into three years, and after many more years of travel I had a good feeling I would end up settling back here. I met my Canadian wife while travelling back home in Australia, and B.C. seemed like the perfect fit for us to settle down. I do miss Australia, but my passions are deeply rooted in the mountains, and we have them right in our backyard here!

Given your passion for the mountains, studying at Selkirk College in Castlegar, B.C., makes sense. Why did you decide to enroll in the Advanced Certificate in GIS and Advanced Diploma in GIS programs?

I met a couple of people ski touring one day and found out that they worked in GIS. I had no idea what it was but my takeaway was that they made maps. I have an affinity for maps, like most GIS professionals, so I thought it sounded like a cool job. Once I looked into it more, I started to understand how much I was already consuming GIS products, and that the wildfire service relied so heavily on this industry in our decision making and day to day operations. I could see that combining my passion of maps and spatial information, with my field experience in incident management, could set me up with a long-term career that was dynamic, challenging and rewarding. Working seasonally in wildfire enabled me to spend the winters studying GIS, and looking back, it was one of the best decisions I’ve made!

Have you used or do you see yourself using your GIS skills for any community organizations?

In the West Kootenays, we have a small but dedicated group of climbers, with lots of new development happening. The rapid growth of climbing areas means that information is disjointed and constantly out of date. As a member of the association, I am keen to use my experience to assist with climbing area maps and databases. I envision a web map that can be updated regularly as new areas and climbing routes are established. There is also a very strong outdoor community in Nelson, with a lot of competition for funding for trail construction. I believe high-quality, informative maps can educate stakeholders and assist smaller groups to secure funding.

I am also very excited to become involved with an organization where my wife is on the board, Blood of Life Collective. I think the organization is best described in their own words: “We are a group of Sinixt and settler activists, collaborating to support Sinixt resurgence. Our mission is to: Promote positive relationships between settler and Sinixt communities, based on Sinixt autonomy in their təmxʷulaʔxʷ (traditional territory); Create multi-disciplinary projects that facilitate Sinixt resurgence; Encourage the development of informed and culturally aware youth; Support environmental initiatives relevant to the Autonomous Sinixt; and deliver unrestricted funds to the Autonomous Sinixt Smum iem.” [bloodoflifecollective.org]

Countermapping will play a key part in the resurgence of a nation falsely declared extinct. I hope to be able to offer my assistance in this aspect of the organization, particularly knowing that I will now have the software to do so through the Esri Canada GIS Scholarship.

The scholarship award includes a three-year term license for multiple ArcGIS products. Are there any products you are looking forward to trying out?

I would have to say that I’m most excited about the ArcGIS Developer Program. As a long-time user of spatial apps and products, I’m very keen to start building my own! The program at Selkirk College does a great job at introducing scripting, web mapping, and the enterprise environment, but understandably only brushes the surface. I am enormously grateful to be able to take a deeper dive through this subscription.

And of course, just having access to ArcGIS Pro and ArcGIS Online will enable me to continue to learn, explore, and find new ways to explore spatial data.