Something was missing. That’s the explanation scholarship recipient Ben Mitten gives for why he left a career in human resources to enroll in the forest technology program at the Northern Alberta Institute of Technology. The program introduced him to GIS and soon he realized that he has a passion for the technology. Learn more about Ben and how he hopes to use GIS in his new career.

Children are often asked what they want to be when they grow up, even though few are likely to stick with that choice through secondary and post-secondary education, let alone throughout their entire career. When asked as a child, Ben Mitten probably would not have said he wanted a career in human resources management, yet he graduated from the University of Lethbridge with a bachelor of management and worked for the Government of Alberta for a couple of years before realizing it wasn’t enough.

Looking for something tangible, Ben got a job on a HAC crew with Alberta Wildfire, which he continued for several wildfire seasons, and he worked as a technician collecting and analyzing samples for a government project studying Chronic Wasting Disease in species of the deer family. Two years ago, he enrolled in the forest technology program at the Northern Alberta Institute of Technology (NAIT). The program has introduced him to the GIS tools that are becoming essential in the field of forestry. He has also discovered another side to technology: “Creating maps to portray data in a meaningful way can be an art. Adjusting layer properties for colour, size, symbology, labels and definition queries allows information to be easily processed by the viewer in map format.” Ben has put these new skills to good use, earning an honourable mention in Esri Canada’s 2018 Esri Young Scholars Award competition as the top-ranked applicant in a college program with all three judges rating his poster in the top 10 for design and visual appeal. 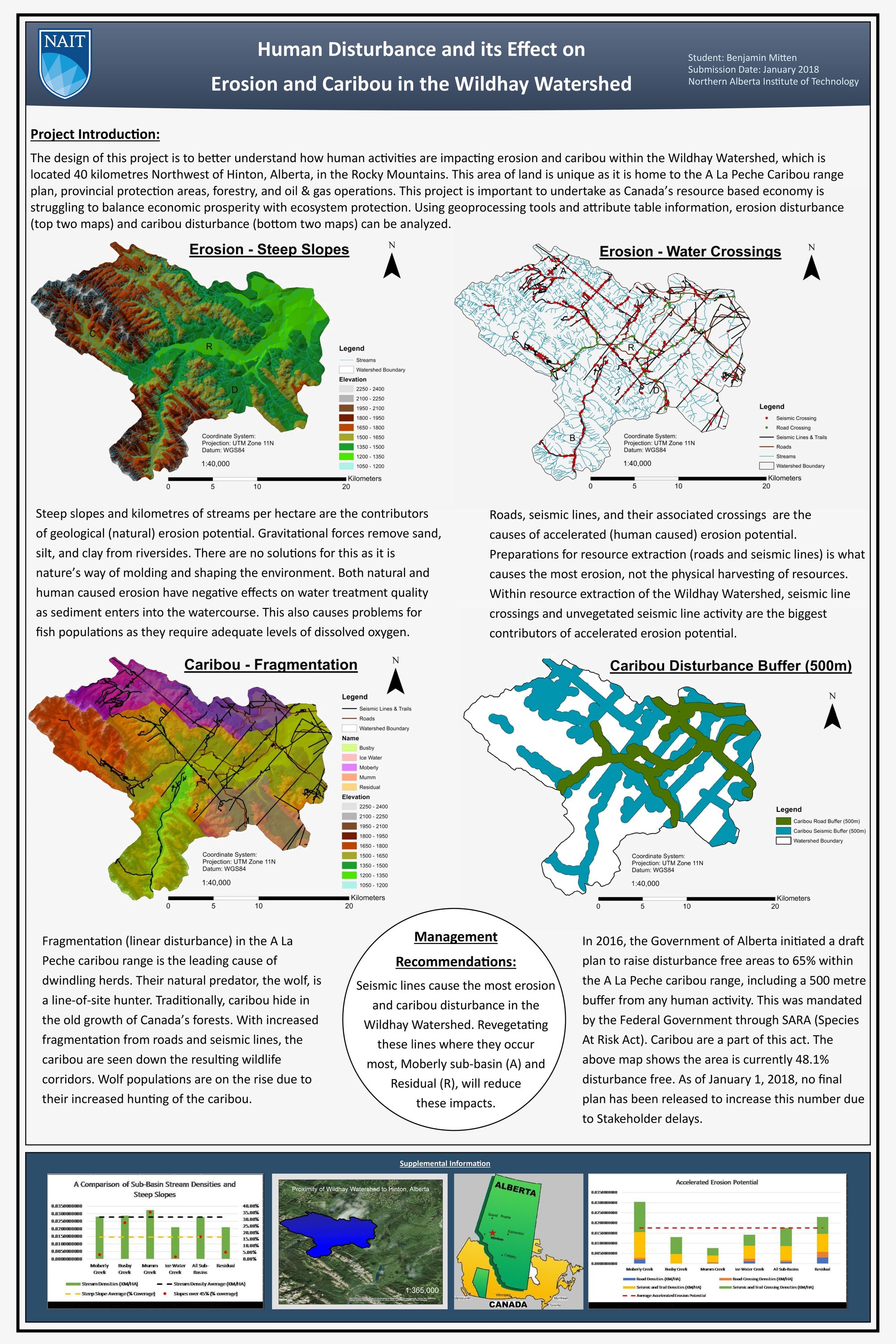 Ben Mitten’s poster for the EYS competition is based on a project he completed for a course in the forest technology program at NAIT.

I followed up with Ben, via email, regarding his scholarship and how GIS might fit into his career.

The Alberta Wildfire site provides a very brief description of the Helitack (HAC) program. How would you describe it? Has your perspective of the job changed since you started the Forest Technology program/learned about GIS?

HAC crew is a smoke-filled adventure with copious amounts of exercise. It’s basically fighting wildfires away from urban centres. You would be surprised how much GIS plays a role in the field. The government has pressures to make sure the fires are completely extinguished. When these fires reach levels of 500 - 500,000 hectares, maps with GPS’ed hotspots make life soooo much easier when you’re on the ground. You do rely on your senses and training to get the hot spots, but technology, such as GIS, has made things a lot easier than the stories you hear about in the past.

You’ve gained experience with ArcGIS Desktop and mobile apps (Collector for ArcGIS) through your program. The scholarship will give you access to ArcGIS Online, ArcGIS Enterprise and developer tools. Do you have any interest in developing your own apps?

The interest right now falls mostly in Python scripting and model building. On my own time, I’m currently experimenting with the vast array of geoprocessing tools and how they can specifically apply to my future career goals. This is the first time in my two year diploma where I’m practicing concepts and learning new ones outside of class assignments or scholarship requirements. I want to develop those skills until I am marketable in those areas. Once I become proficient, I wouldn’t rule out other GIS avenues.

You list this under skills/knowledge in your resume, so I have to ask: why have you run 15 ultra-marathons? And what is a hypothermic half marathon?

Because 14 didn’t sound right, haha. I love the feeling of pushing the body to its limits, and the journey getting there. The hypothermic half marathon is during February, which can be a frigid time of year as most of us Canadians know. The coldest run I’ve done was a -30°C, 25 km race.

Technology is on the rise, and I want to be part of that. To be a specialist in an area where people need your skill set to keep an organization running smoothly is exciting to me. The possible applications of GIS continue to grow. Knowing that GIS is versatile gives me confidence that industries will require the skills that naturally come with being a GIS expert. Solutions to organizational problems are the strength of GIS. My career goals are to be part of that solution.