Meet January’s GIS Ambassador Dr. Bhairavi Shankar, a planetary scientist and geologist from Mississauga, Ontario who’s been sharing her expertise of space and GIS to K-12 students for the last two years.

Happy 2020! Let’s begin the year by highlighting a passionate GIS professional from Mississauga, Ontario. January’s GIS Ambassador of the month is planetary scientist and geologist Dr Bhairavi Shankar! She’s been supporting STEM based learning by facilitating hands-on GIS workshops with a focus on planetary science and careers in GIS.

We are excited about sharing the work she has done this school year in her role as a GIS Ambassador. The combination of space and GIS is a sure way to get K-12 students excited about learning! 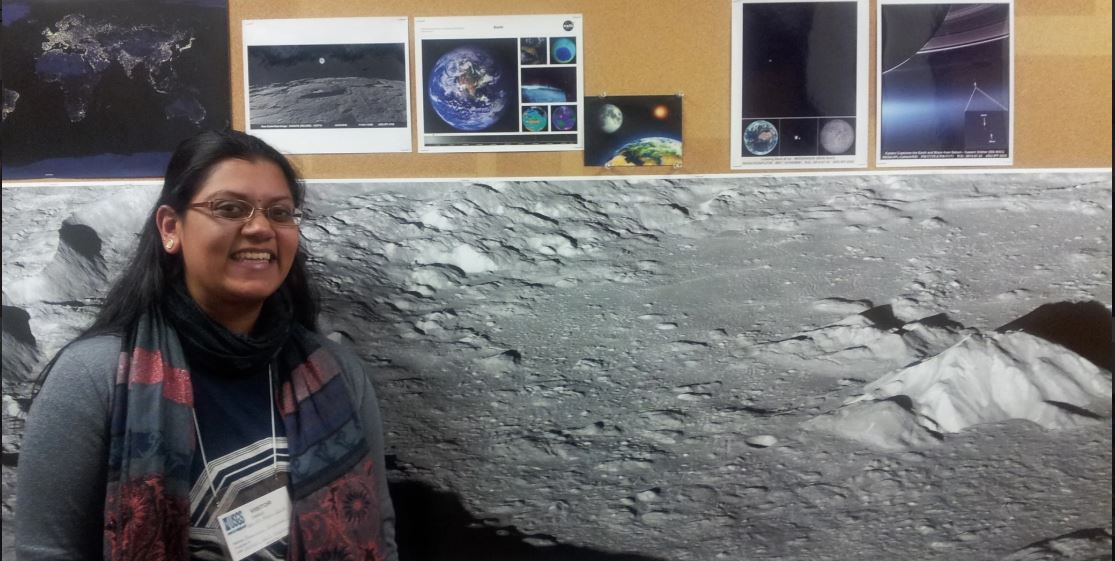 Dr Bhairavi Shankar is always keen to support a local classroom and to share her passion for space and GIS.

Tell us about the work you’ve done to promote the use of GIS in K-12 education.

So far, this school year I have facilitated a couple of workshops with K-12 students.

First, I organized and facilitated a three-period introduction to GIS with Grade 9 and Grade 11 students at T.L. Kennedy school in Mississauga. Students were introduced to the basics of mapping, common GIS terminologies and the role of GIS in space science and planetary exploration. They formed teams and each looked at published maps of various planetary surfaces including the Moon, Mars and Earth. Students explored the principles of zoom, map scale, feature identification and hypothesized what the surface represented. I ended my visit by discussing careers within GIS, and highlighting post-secondary level GIS programs in Ontario. 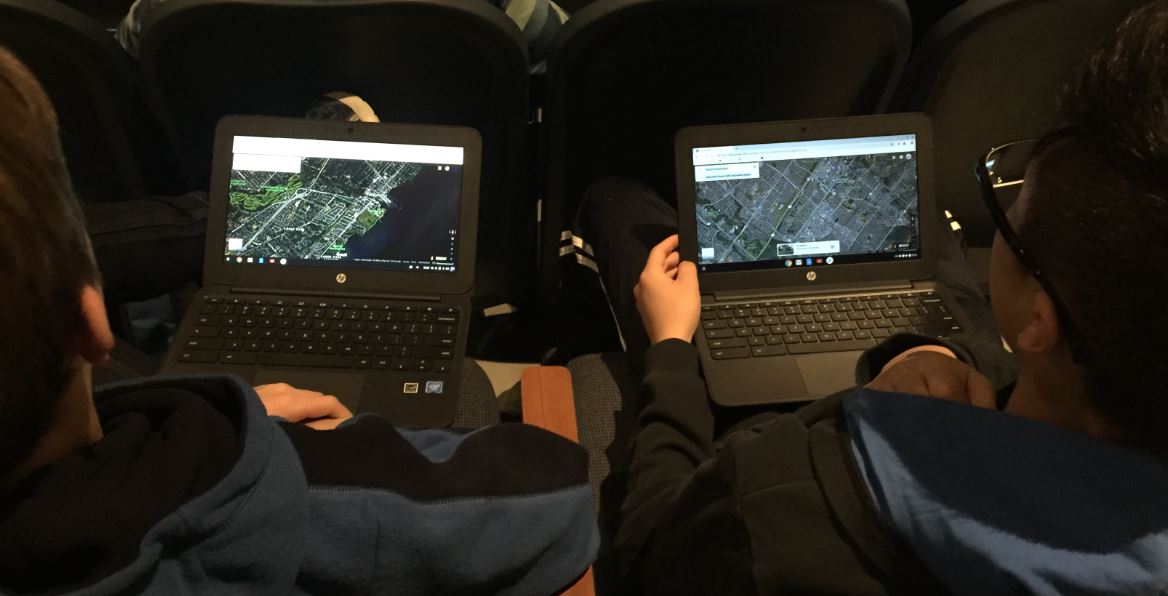 Students enjoyed the hands-on activity at Port Credit Secondary School during a GIS Day Visit in 2018.

I also organized a two-period activity with an International Business and Technology (IBT) Geography class at Meadowvale Secondary School in Mississauga. With this class following the introduction to GIS and its role in several sectors including urban and natural scenarios, the students used open-source data from the Greater Toronto Area (GTA) to work in groups and assess the scenarios using ArcGIS Online. For example, students looked at the impact of flooding on the Toronto lakeshore on park benches and bicycle paths. Another group assessed the effects of flooding on an Indigenous community located on Scugog Island. A third group looked at the effects of published air quality records for the City of Mississauga comparing it to the location of necessary public service resources such as, hospitals, ambulance and fire stations. Other groups looked at the readiness of Mississauga and Toronto as sustainable cities. In each case, groups came up with recommendations on other datasets that might have been helpful for their scenario that weren’t readily available as open source datasets.

Along with my GIS Ambassador work, I have introduced basic concepts of GIS and mapping to middle school aged students at an annual "All Things Space" STEM camps in the GTA for the past two summers.

Why do you think it is important to be a GIS Ambassador and support the use of GIS in K-12 education?

In the 21st century, GIS is continually becoming an integral tool in research and planning in each and every sector of society. The combined role of integrating spatial location together with any type of acquired data leads to advanced analyses on patterns, problem-solving, and more comprehensive decision making. These skills involve several aspects of critical thinking, communicating, visualizing, teamwork, and integrating technology. I believe these skills should be introduced to youth by educators as early as possible so that they can recognize the importance of this sector and the value GIS brings to our collective community. The GIS Ambassador program provides an opportunity for many of us in the GIS sector to engage and introduce future users of this value.

Tell us about your educational background and how you got into GIS.

I got my introduction to GIS during my master’s degree at the University of Minnesota when I took several geography courses (Intro to GIS and Remote Sensing) and my master’s thesis involved investigating the surface of Venus using satellite data. I used GIS to translate a 2D surface map onto a 3D sphere and investigate surface patterns to infer the history of a distant planet. I continued to actively use GIS tools and analytical techniques during my PhD at Western University and subsequent research career, investigating the geological history on the earth and the moon. I now have an Ed-tech start up called Indus Space where the aim is to introduce youth to the world of Space Science, in that process I incorporate GIS tools and techniques in the content I deliver.

What are your plans for this year?

This year, I look forward to working with local partners in highlighting the role GIS plays on Earth and beyond to a broad audience! I am going to be presenting to K-12 students at the Esri Canada’s GIS in Education and Research Conference in March and I'm in the early planning stages of organizing a local GIS Day event. 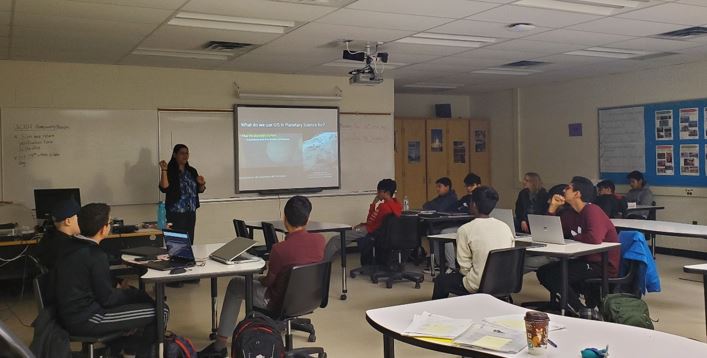 Bhairavi explaining how GIS plays a critical role in planetary science during a visit to Meadowvale Secondary School.

We received great feedback from teacher Ami Patel from Meadowvale Secondary School. She recently contacted us to tell us how thrilled she was with Bhairavi’s class visit in the fall.

“Thank you very much for connecting me with Dr. Bhairavi Shankar – the GIS Ambassador for the classroom visit at the start of this school year. Dr. Shankar visited my Grade 9 IBT Geography class. The students had a wonderful learning experience from the workshops, and it sparked curiosity among many of our young learners, as they are now thinking about applying the use of ArcGIS online in their final evaluation projects in January. I'd like to extend my appreciation to Dr. Shankar and the team of Esri Canada Education and Research for this learning opportunity.”

Bhairavi, continue your wonderful work with the students and teachers. We thank you for your support and find your excitement in promoting the use of GIS in planetary science a breath of fresh air!

If you are a teacher looking to connect with a local GIS Ambassador in your community, let us know and we would be happy to set up a school visit before the school year is over.