Michael Mayer is April’s GIS Ambassador! He’s been supporting the use of GIS in K-12 schools in Surrey, BC. Find out how Michael’s love for geography led him to GIS and why he volunteers his time as an ambassador.

Michael Mayer is a GIS Analyst from the City of Surrey, in British Columbia, who’s been an active GIS Ambassador for the last seven months. With the support of his colleague Cameron Blandy and his manager Bill McKay, he leads the volunteer projects that involve promoting the use of GIS at local K-12 schools.

Michael’s love for geography led him down the path to GIS. He was inspired by a teacher in grade 12 who made geography interesting and fun. He realized that he wanted to continue his studies in this area, but he was unsure as to what exactly he would do until a friend told him about GIS. He began his post-secondary studies at Capilano College (now Capilano University), enrolling in as many mapping and geography courses as he could. He continued his studies in GIS at Simon Fraser University where he completed a certificate in Spatial Information Systems. After a short time, he decided to enroll at the British Columbia Institute of Technology (BCIT) where he completed the Advanced Diploma in GIS Technology. 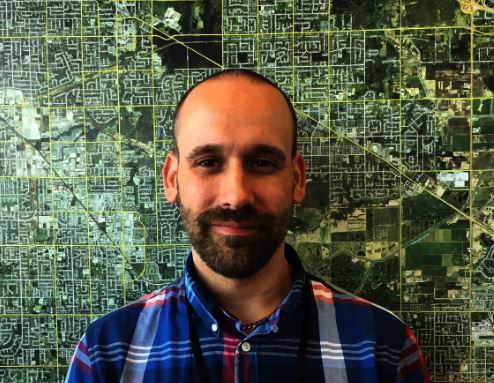 Michael wants to share his love for geography with students through maps.

Soon after finishing his studies at BCIT, Michael found employment in the field of GIS. So far, he’s worked at junior exploration and mining companies, and he’s most recently worked in municipal GIS.  At the City of Surrey, he’s been working on a detailed 3D model of the city centre using ArcGIS Pro and is leading Surrey’s Open Data program. He enjoys the different aspects of a GIS job: working with different types of data, creating maps and analyzing information. This extends to his work as an ambassador. Michael has volunteered his time to promote what he does professionally to K-12 students and teachers.

Sharing knowledge of GIS from his professional experience, and using resources developed by Esri Canada’s K-12 Education Group, Michael has facilitated introductory ArcGIS Online teacher and student workshops with the help of his colleague, Cameron, at Surrey schools. They are open to making monthly school visits to schools in support of requests for professional development and community engagement.

Sarah McSkimming is a teacher from Johnston Heights Secondary School in Surrey who invited them to discuss GIS with her grade 12 geography students in December 2017.  She recently emailed Michael to tell him, “I appreciated so much that you and Cameron came to my class to introduce them to GIS. The students talked about your visit for several days afterwards. I think that it was a very valuable experience for them to meet someone who actively works in the field and on an application with real world relevance helped them think about future possibilities and options in the field. Thank you again!”

Explore the GIS Ambassador Outreach web app to learn more about the work Michael and Cameron have done so far at local schools.

Michael and Cameron have been busy supporting schools in the Surrey area. Go to the GIS Ambassador Outreach web app to explore the work they have done.

As a GIS Ambassador, Michael believes, “the future of our world lies in the hands of these young minds. Exposing them to the world of GIS is imperative to understanding our world and the relationships, patterns and behaviors that GIS can expose them to. We live in a spatial world, and everything around us has a spatial context to it and can be mapped! The power is in the data and in what you can reveal with it. Exposing K-12 students to this technology will make them more aware of the world around them and the spatial relationships that exist. We constantly see this on the internet and in social media. Most apps now have a spatial component to them, so understanding how this data works, how to map it out and derive meaningful data and relationships from it is so important to these young kids. They are surrounded by it already. I think exposing them to GIS makes them understand it all that much better! “

Later this month, Michael will be starting a new job in a senior management role in technical services at an exploration company. We wish him all the best in his new role, and we are thrilled that he will continue to support schools in the Surrey area. We look forward to hearing more about his ambassadorial work.

If you are interested in receiving support from a GIS Ambassador like Michael, fill out the online request form, and we would be happy to connect you with someone in your community.