Larisa Johnstone is July’s GIS Ambassador. Find out how this passionate GIS professional is supporting teachers in Essex County, Ontario to apply mapping and spatial analysis to real-world concerns, and learn what her plans are for the new school year.

One of the first professionals to sign up for the GIS Ambassador Program, Larisa Johnstone is July’s GIS Ambassador. For three years, she’s been sharing with teachers and students her love of maps and her passion that geography can help us understand the world and how we are connected to one another.

She moved from Johannesburg, South Africa to Windsor, Ontario, Canada as a teenager. Missing her hometown, she found solace exploring paper maps and atlases as she sat for hours discovering places she wanted to visit in Canada. Her hobby became her life’s work.

Larisa’s professional life began as a field surveyor and then as a GIS technician with the Essex Region Conservation Authority near Windsor.  She digitized wetlands, created tree inventory databases, surveyed trees and mapped floods. She worked as a land surveyor for six years until she accepted a position as a GIS CAD technician at the City of Windsor in 2006. She’s been working there ever since. Larisa continues to increase her GIS knowledge by taking Esri training courses and sharing what she’s learned with the teachers and students she works with as a GIS Ambassador.

Since 2015, this ambassador has been a real champion for GIS education. From teaching her daughter’s elementary class about the importance of maps, to leading high school teacher workshops that covered story maps, mapping skills and GIS principles, to providing tech support to local teachers, she’s really been supporting teachers in Essex County.

She’s even promoted the GIS Ambassador Program. At the Esri Canada User Conference in London, Ontario in 2016, she encouraged a conference room full of GIS professionals to get involved with a local school. 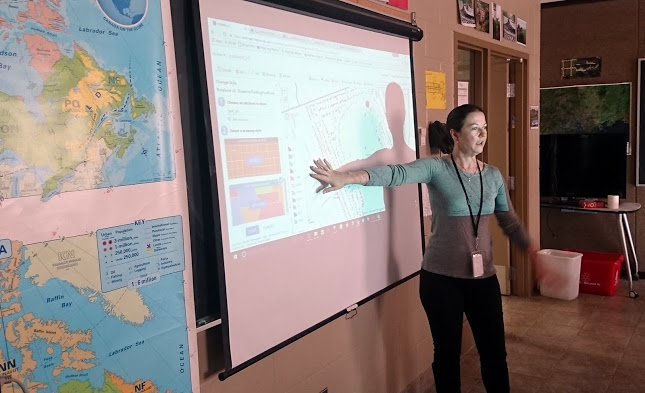 Larisa’s been supporting K-12 teachers with getting started and progressing with GIS. She has been volunteering her time for the last three years as a GIS Ambassador.

These are some of the reasons that she is July’s GIS Ambassador.

Last year, Gloria Baric, who teaches grade 2 at Tecumseh Vista Academy in Tecumseh, Ontario, a dual track (French and English) school, asked Larisa to help with a class heritage project. Gloria wanted to map the geographic backgrounds of her students’ families. Larisa helped her collect student information and created a story map about the class. When it was completed, she shared it with the students’ parents. Not only did the students learn about maps and different countries, they also found geographic connections with each other. 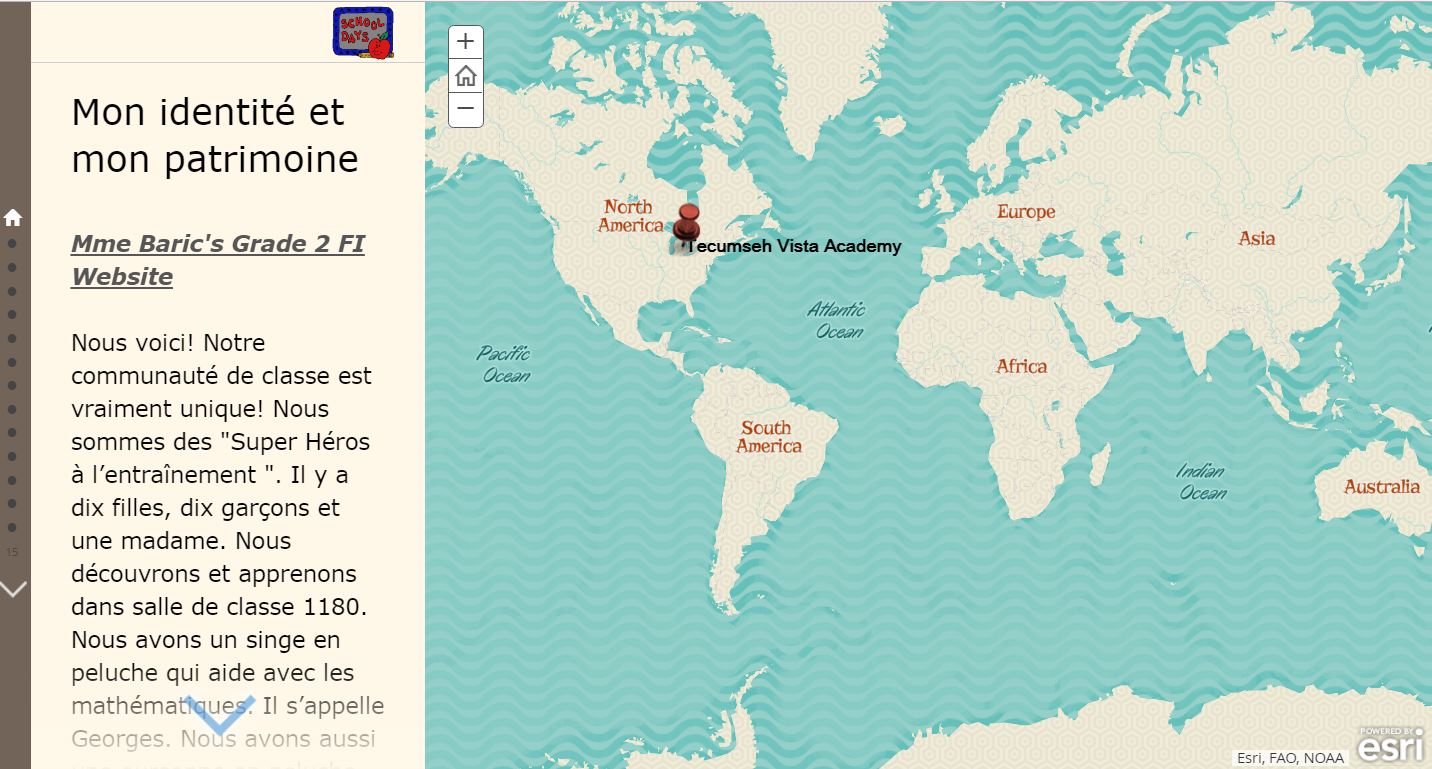 Larisa also supported David Brian, a geography teacher at Académie Ste-Cécile International School (ASCIS) in Windsor, on several data collection and mapping projects. Their first project together was with David’s grade nine geography class. It was a study about buildings and their connection with the economic development of downtown Chatham. Using Survey123 for ArcGIS, Larisa and the students collected data on building dates, building type, structural rating of the buildings and building occupancy. The students then created maps in ArcGIS Online to analyze the data on building types, and they looked for areas in Chatham that could be developed. They also compared their findings with other Canadian towns of similar size. This project allowed students to use critical thinking and decision-making skills to explore real-world concerns.

The second project Larisa did with David and his students involved the so-called "lost" black cemeteries in Essex County. They are “lost” because they haven’t been documented even though they are a vital part of local history. The cemeteries are the burial grounds of slaves and their descendants who escaped the United States through the Underground Railroad to settle near Windsor. Using Survey123 for ArcGIS, grade 12 students geo-located the headstones, recording the headstones’ condition. They created a database of the names and dates on the tombstones. The students then created an interactive web app of all the “lost” cemeteries in the region. This gave them a much deeper understanding of the Black history of Essex County and reclaimed this historic information for future generations. The project was so well received it was featured in a local CBC story.

In both projects, David and his students used professional GIS software and apps to explore and analyze important and relevant topics close to home with the support of a committed GIS Ambassador. David’s gratitude to Larisa is clear.  “Larisa was a selfless GIS ambassador – always willing to take my emails any time, any day, and reply with helpful suggestions. And if she didn't have the answer, she'd work on the issue until she had one.  In addition to providing remote help with GIS issues, Larisa was willing to share her expertise both in the classroom and on field work trips, providing my students with a positive role model, which is a key part of my contextual teaching. Finally, Larisa's constant positive and enthusiastic attitude was key to getting the GIS program off the ground at ASCIS; without her, it would have floundered.  A big thank you to her!”

Susan Crowley, a geography teacher from nearby Walkerville Collegiate Institute, was also thrilled to be connected with Larisa, “I am grateful to have accessed Larisa as a GIS Ambassador. She has helped me motivate both students and fellow geography teachers in our board to embrace GIS applications and technology. I love that she's just a quick email away if I need support.”

This summer, Larisa will be meeting a couple of high school teachers from Tecumseh Vista and Leamington District High School to plan projects for the fall. As the only ambassador in Essex County, she would like to support teachers outside the region, too, and hopes other GIS professionals from the area will be inspired to get involved with their local school after they read this blog post.

In the fall, Larisa will be involved in a GIS Day event at the City of Windsor in partnership with the University of Windsor. They plan to run an online scavenger hunt/quiz and a quick Q&A from Facebook and Twitter for a chance to win prizes like last year’s event. Schools are encouraged to participate, and the event is open to the public.

Thank you, Larisa, for your dedication in supporting geography and GIS education!

If you’re a K-12 teacher interested in getting your class started with mapping in the fall, request a GIS Ambassador today.