Nearly two dozen students from around the world selected as this year’s Esri Young Scholars were among the more than 17,000 attendees at the 2017 Esri User Conference in San Diego. Find out more about Canada’s Esri Young Scholar, Emily Acheson, and her experiences at the UC.

“The experience was the best I have ever had at a conference, and I am so happy to have met such amazing people.” That is how Emily Acheson, PhD student in geography at the University of British Columbia and the 2017 Esri Young Scholar (EYS) from Canada, described her time at the Esri Education GIS Conference and Esri User Conference. She was one of twenty-one students from around the world who won recognition – and a trip to the UC – for exemplary work in geospatial sciences. 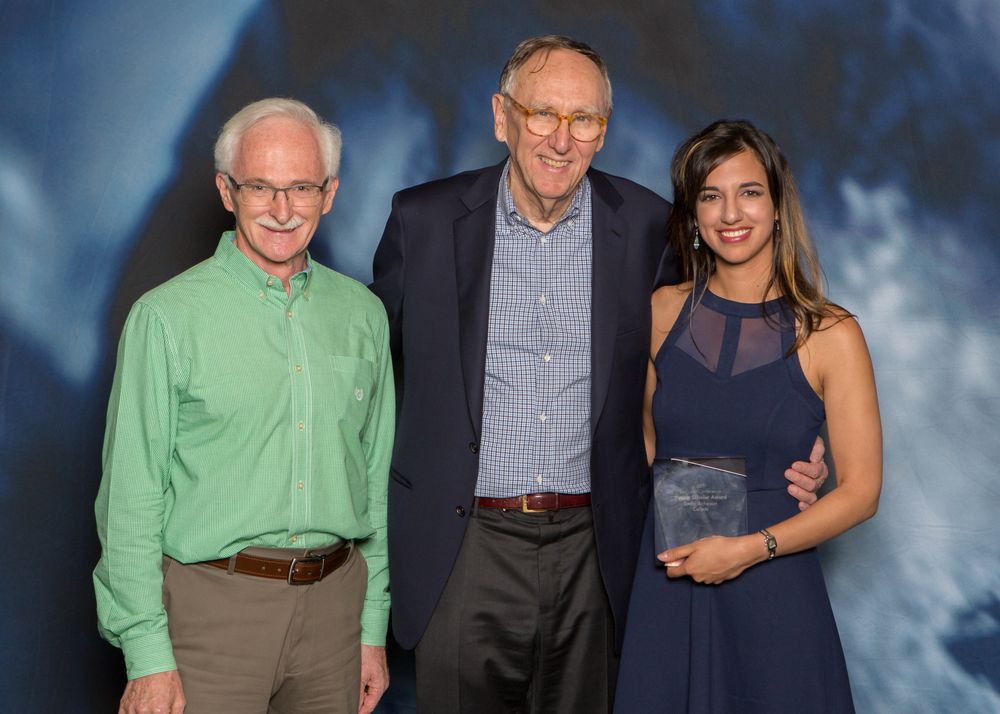 I asked Emily, via email, to share her thoughts about her trip, her research and her future plans.

KA: What were your overall impressions of the Esri UC and Education GIS conference?

EA: While I was initially overwhelmed with the number and variety of people and presentations each day, I was also amazed at how well-organized the conferences were. The size of the Esri UC and Education GIS conferences made the efforts of the Esri staff and volunteers running them very impressive. The presentations I attended were informative, the staff were always available to help guide you to an event you were looking for and there were different talks and interactive workshops for anything you might need help with. The food was also delicious!

KA: Were there any sessions that you found particularly useful or interesting?

EA: The most useful sessions for me were at the Expo. I spent most of my time there visiting the different stations, speaking with representatives and working on computers to learn about new Esri technologies. I was particularly impressed with the staff at the ArcGIS Pro and Spatial Analytics stations who helped answer my questions and even showed me the steps on a computer.

KA: How did you feel meeting the other Esri Young Scholars? Do you think you will keep in touch with any of them?

EA: I was lucky to be part of an incredible group of students from around the world. It was a little intimidating to meet everyone at first, but we related so well to each other that we ended up getting really close and were friends within a day. We formed a group through WhatsApp and over Facebook and spent every day together attending events at the conference or exploring the city in the evenings. We learned both about each other’s research and each other’s languages and cultures. We have been sending each other helpful research links as well as photos from our trip and our home countries. I do hope to remain friends with everyone.

KA: You received an Esri Canada GIS Scholarship a couple of years ago. Do you think this helped you in any way win the EYS competition?

EA: Yes. Winning the Esri Canada GIS Scholarship helped me learn what the judges are looking for and how to improve my maps and posters. Winning that scholarship also exposed me to other Esri events and competitions. I got useful feedback at the conference about my current poster as well, and I am constantly looking for ways to improve. I am very grateful to have won both competitions.

KA: Can you tell me more about the project you submitted for the EYS competition?

It is a continuation of work that I did while completing my Master’s degree in biology at the University of Ottawa. I had done a spatial analysis of ownership of mosquito bed nets across Tanzania and how it compared to malarial mosquito distributions (similar to looking for mosquito hot spots and hoping we’d find higher levels of bed net ownership where there are lots of mosquitoes). I found that there was no correlation between ownership and mosquito hot spots, which was quite surprising since we would infer that more mosquitoes in an area likely means higher malaria occurrence. The poster and report I submitted for the EYS competition showed a continuation of this research, using the same methodology to look at mosquito bed net use and indoor residual spraying (i.e. spraying houses for mosquitoes) across Tanzania. I found that while mosquito bed net use also showed no correlation with mosquito distributions across the country, there was a positive correlation with indoor residual spraying (i.e. areas with higher likelihood of mosquitoes had greater numbers of houses sprayed for mosquitoes). This might have to do with spraying being more localized to certain parts of the country where malaria prevalence is high relative to the more widespread distribution of mosquito nets. 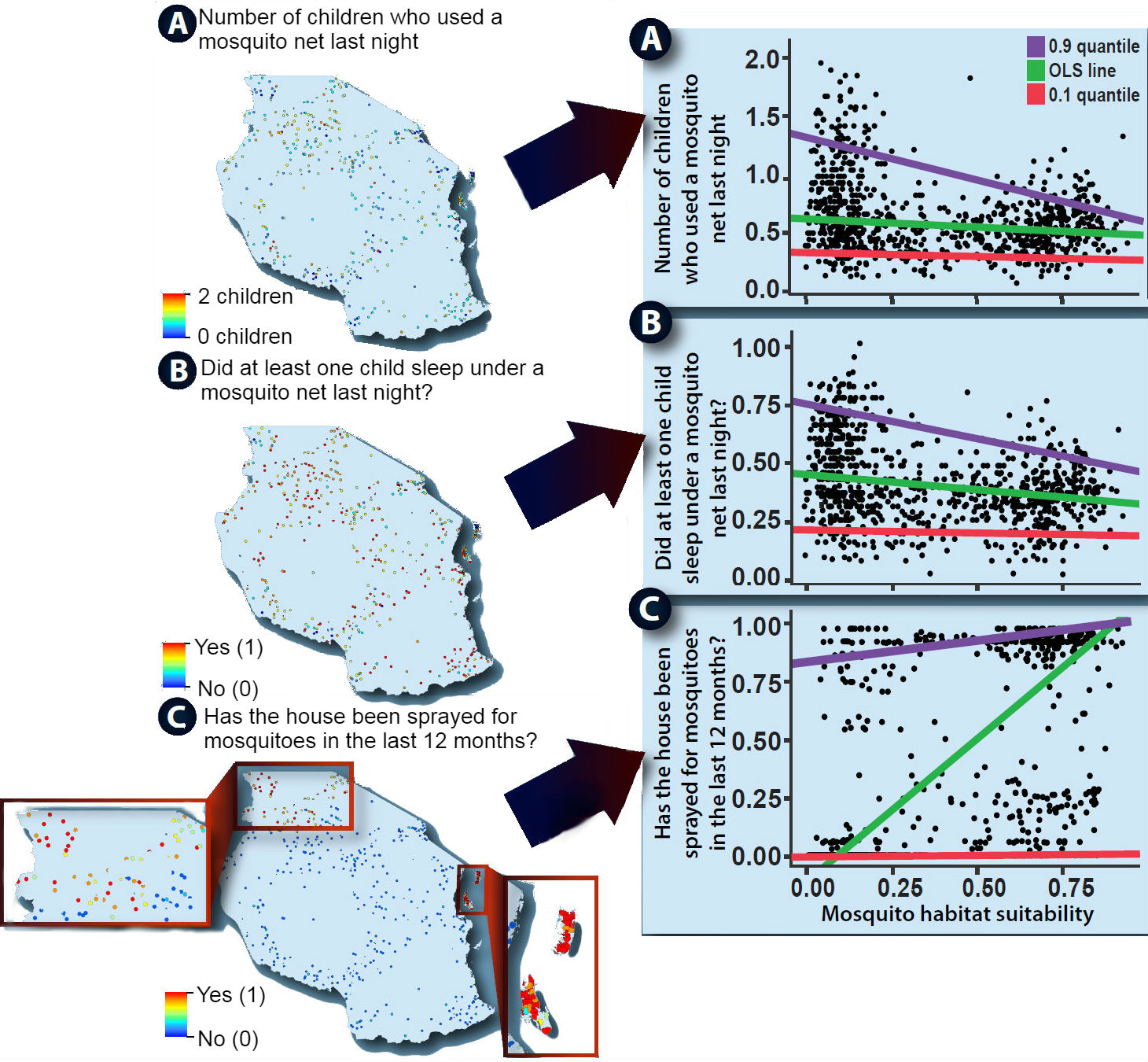 KA: You are just about to start your third year of your PhD. I know better than to ask when you expect to graduate, but what are you hoping to do after graduation?

EA: I am hoping to work abroad in labs studying disease vector ecology and epidemiology to learn how the research I am working on is done in other countries. Academia is still an area I love and want to be a part of, so I am aiming to do joint work with an organization like the Centers for Disease Control as well as with a university as a professor.

KA: Any final thoughts on being an Esri Young Scholar?

EA: I am honoured and grateful to have been part of the Esri Young Scholar program for Canada. The experience was the best I have ever had at a conference, and I am so happy to have met such amazing people both within and outside of the EYS group. I learned about new Esri technology from experts in their fields, I networked with potential employers and colleagues from around the world and I made a group of wonderful friends I spent time with and from whom I have learned so much. It was a unique and memorable week that I was lucky to experience, and I hope to attend the Esri UC again one day.