Canada’s sesquicentennial birthday is around the corner. Discover some of our Canadian themed ArcGIS Online resources. Find out what our newest lessons are and check out other resources that cover Canadian topics related to history, social studies and geography.

On July 1st, Canada will be turning 150! It’s a time for celebration, reflection and discovery. We have put together a Canada 150 group of ArcGIS Online resources that explore topics about Canada. We encourage you to try them before school ends or during your summer break, so that you can use them in the new school year. Find out what’s included in the group below:

My Canada
This lesson was created especially for Canada’s 150th birthday. Students will use ArcGIS Online to create web maps that present significant information about their experience living in Canada. This will include where they live, cultural and human characteristics in their province or territory, prominent geographic features in their region, indigenous people(s) in their area and historical events that have occurred in Canada that have a direct impact on them and on Canadians.

Marine Debris in the Pacific Ocean
In this lesson, students will use ArcGIS Online to explore Canada’s Pacific coastline to gain a deeper understanding of where marine debris comes from, what it consists of and what processes cause the accumulation in certain zones. 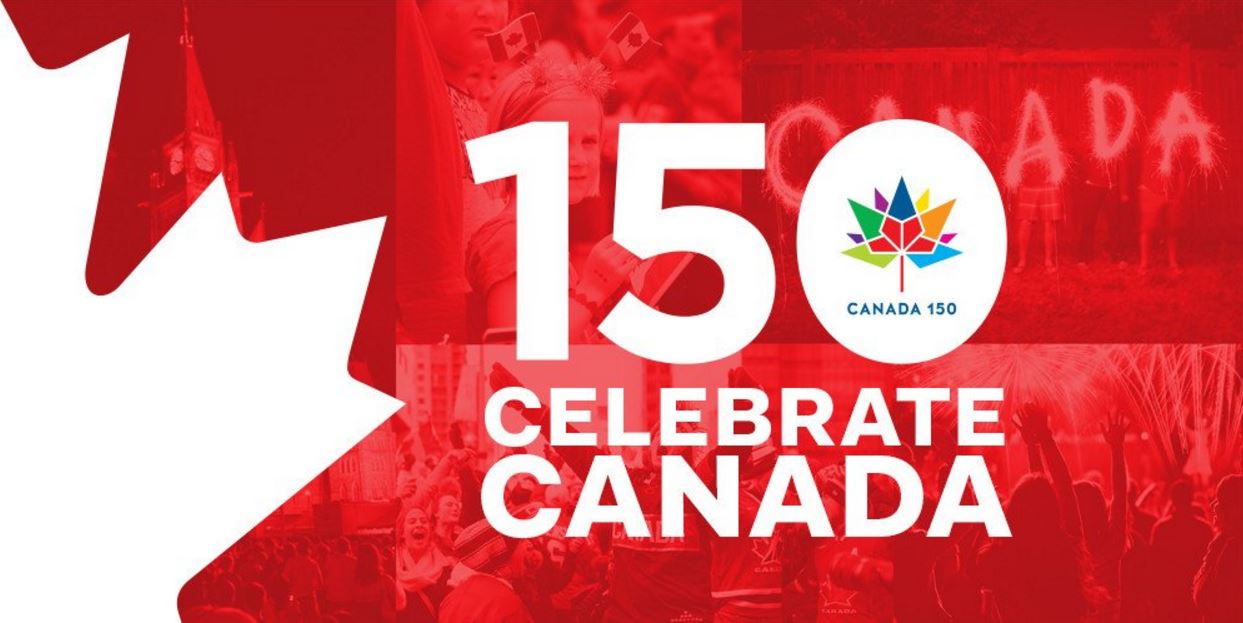 Canada 150 - get in on the celebration this year!

A Kids Guide to Canada
This teacher-led initiative invites K-8 classes across Canada to investigate, honour and introduce the land and people of their neighbourhood communities to the other children of Canada. Elementary students from every corner of the country are encouraged to collaborate and help create the first interactive and multilingual guide to Canada produced by kids and for kids! Esri Canada is providing ArcGIS Online support for the project through the creation of the web map, operations dashboard and the geoform application.

Nation Builders
In this story map, you will discover many of the people who played a significant role in uniting the colonies of British North America and other territories to form Canada, including the Fathers of Confederation and other key delegates and organizations.

Canadian Heroines
This story map celebrates the accomplishments of some women who made significant contributions to society. Most of them were born in Canada; others immigrated to Canada or spent just a short time here, but they all left an important legacy. Some were Canadians who achieved great things in other countries. 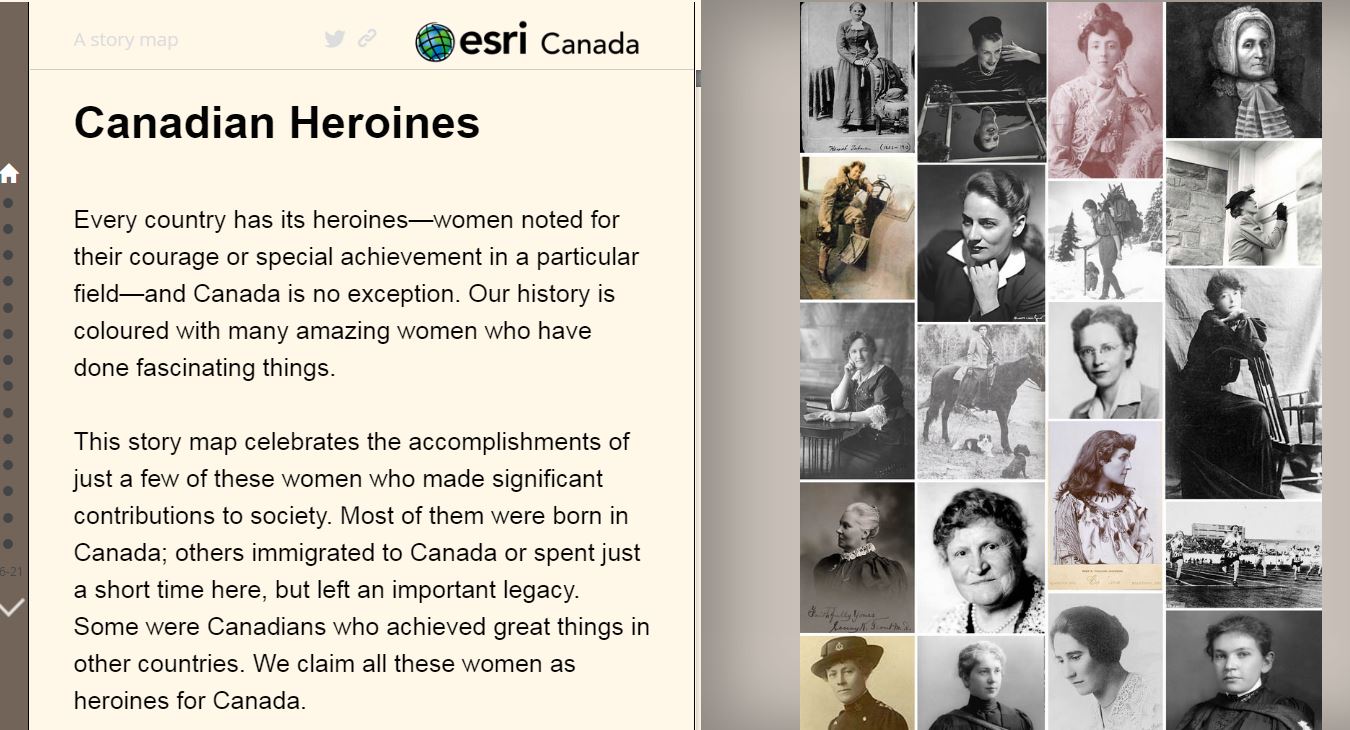 Learn about Canadian women who have made significant contributions to society.

Canadian Confederation: 1867 to Present Web App
In this web app, students will explore Canada's territorial growth since Confederation in 1867.

Canada's Participation During World War I: The Battlefields
In this Esri Canada activity, students will explore Canada's involvement on the Western Front during World War I through primary source documents such as photographs, paintings, videos and advertisements.
French version

World War I: The Role of Canadian Women
In this Esri Canada activity, students will explore the changing role of Canadian women, including their contribution on the home front and overseas during World War I through primary source documents such as photographs, letters, paintings and advertisements.
French version

The Underground Railroad - Freedom in Canada

In this story map, you will learn about some of the key people involved in helping refugee slaves settle in Canada, and you will find out where some of the black settlements developed in Ontario. 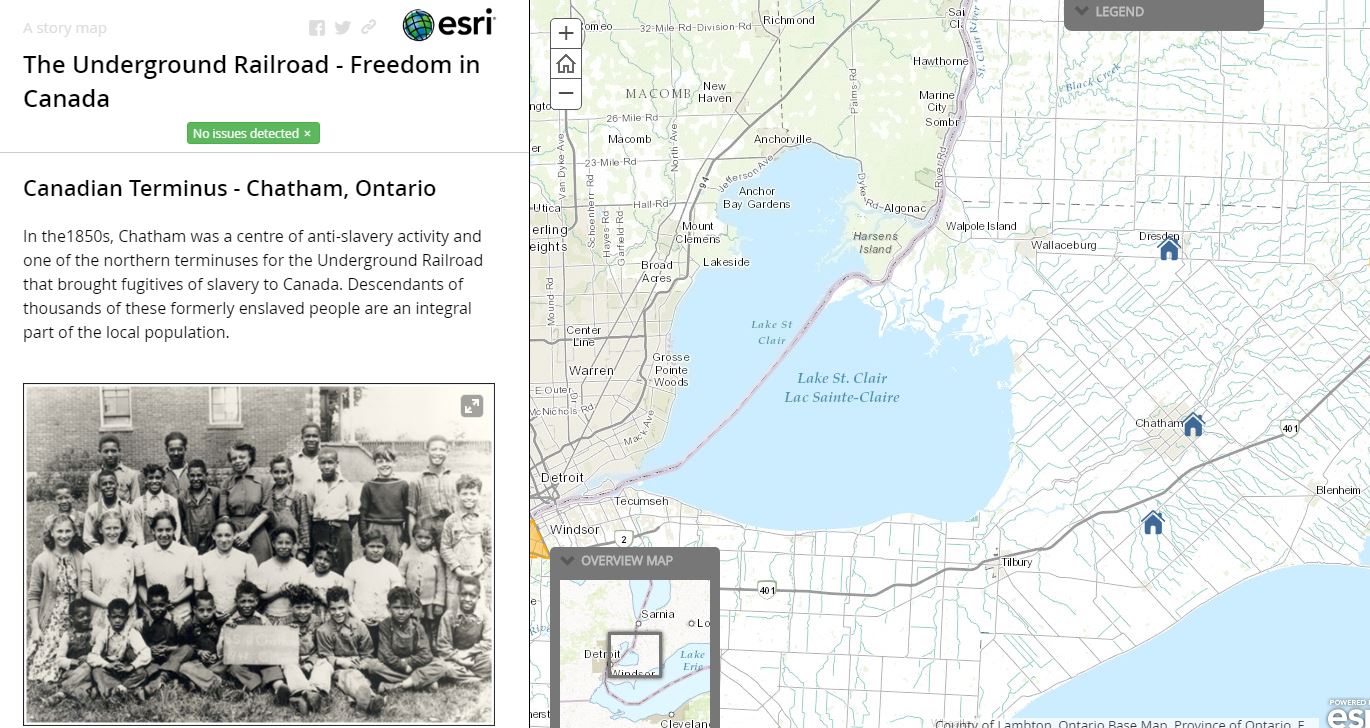 In the 1850s, Chatham was a centre of anti-slavery activity and one of the northern terminuses for the Underground Railroad that brought fugitives of slavery to Canada.

Seven Years’ War
In this lesson, students will identify, map and summarize the participants and causes of the Seven Years' War, key forts and battles and the resulting consequences for Canada's identity and boundaries.

The Aboriginal Peoples in North America
In this lesson, students will explore the Aboriginal and European settlements in Canada circa 1630, 1740 and 1823.

Rush for Gold in British Columbia
In this lesson, students will create a map to present key events, places and persons and summarize the lasting consequences they had on the settlement of BC while creating a route to take tourists on a bus tour of historic gold rush locations.

The Red River and Northwest Rebellions
In this lesson, students will identify key events, battles and persons during the Red River Rebellion and investigate how they continue to affect us today.

The True North Strong and Free
In this lesson, students will create a map to investigate prominent geographic features in Canada and to explore how these landscapes shape where humans and animals live.

This web map displays Nunavut communities. Students can click on the points to view a description that includes the community name in the Inuit languages of Inuktitut and Ininnaqtun, the translation of the place name and the population in 2011. 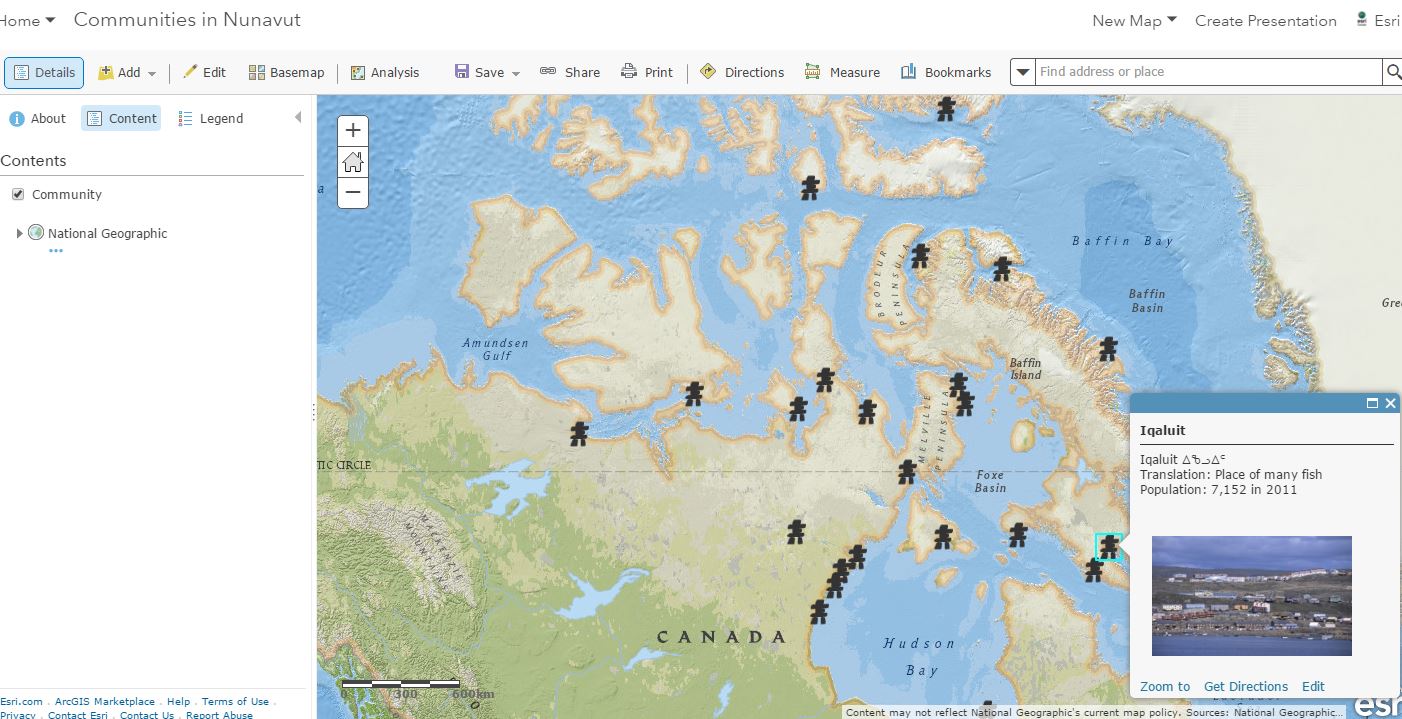 Discover communities in Nunavut and learn the meaning of their names.

The Changing Face of Canada
Explore the diversity of Canada through analyzing, comparing and contrasting visible minority population data provided by Statistics Canada.

Are you a K12 educator in Canada who is new to ArcGIS Online? Sign up today for a free Canadian education account at www.esri.ca/agolaccess.

If you have any questions or comments about our resources, feel free to contact us at k12@esri.ca.