Here’s a look at what’s happening in Canada and globally in the world of spatial data infrastructures (SDI). This June 2016 post is a collection of the latest and most significant SDI news, data and products. 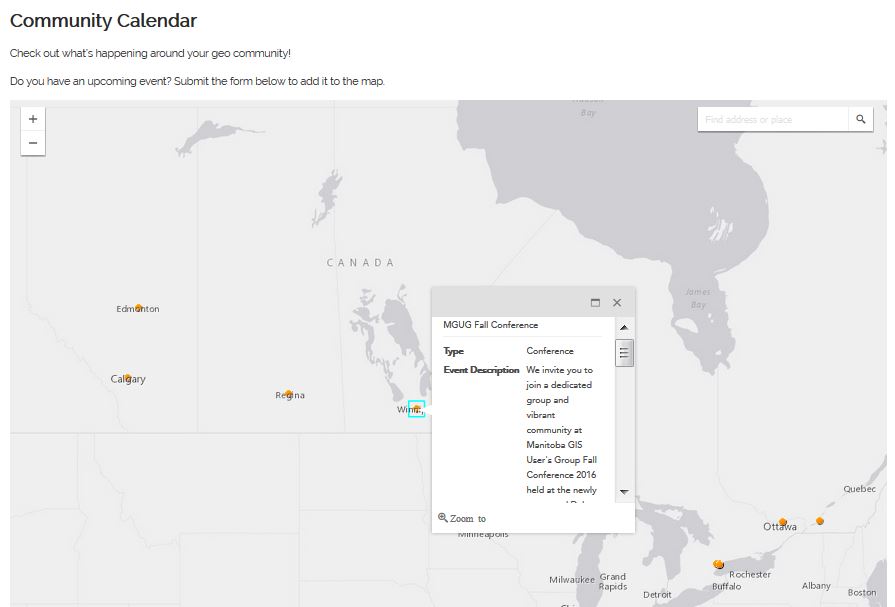 GeoAlliance Canada has developed an online interactive map that displays geomatics events across Canada. Check out the map and add your organization’s event.

The Government of Canada wants to hear from the public on the direction they are proposing in their draft of the new plan on Open Government, which has been developed based on the public’s input during the idea-generating phase of the consultation.

Why the Canadian Arctic needs to be mapped

The Canadian Arctic includes 36,000 islands and more than two million square kilometers of ocean, which is becoming more and more accessible as ice melts. Without proper mapping of the ocean and the sea floor, the new passageways that are being opened could prove to be dangerous. Many of these passages wind between islands, over undersea ridges and could be changed in a matter of months because of currents and ice melt.

TECTERRA announced that it had committed $4.9 million of additional funds to support the geomatics technology sector in Canada during the last fiscal year, which ended on March 31, 2016. This additional commitment brings TECTERRA’s investment in the geomatics industry to over $37.3 million to date.

Where is the money in the geospatial world?

The geospatial industry has been expanding at a breakneck speed with ‘geo’ getting embedded in more and more workflows. As new innovative players enter the game with disruptive business models, existing players have no choice but to go through a transformation to stay relevant.

The European INSPIRE Directive was introduced in 2007 and should reach full implementation in 2020. Today, over halfway through the process, various important milestones have already been achieved while others still lie ahead. GIM International magazine interviewed a policy analyst at the European Commission to reflect on the journey so far and look ahead to the future.

Have you ever felt the wrath of a Canadian Crown Corporation? In 2011, Canada Post set its sights on Ervin Ruci. By 2012, it had sued him personally for copyright infringement. The copyright Canada Post believed he had violated was the postal codes that we all use and share.

It’s still not known exactly when Amazon Web Services will be launching its Canadian availability this year, but when it does arrive, it will come along with a new cloud-based contact centre solution. Amazon’s new Canadian wing was on hand in Toronto for the announcement of the pending launch of the PureCloud platform in Canada.

A recent white paper by Machina Research and InterDigital has found that open standards in smart city IoT deployments would accelerate growth by 27% and reduce deployment costs by 30%. Given the scale of both budgets and timelines for smart cities projects, these figures represent considerable dollars and time.

GIS has changed, have you?

Inertia. It’s a challenge for all organizations. It entails adopting new ways, workflows and processes. Change can be difficult, but it is ongoing. With technology, the pace of change is increasing. This blog discusses the transition from desktop GIS to cloud and mobile GIS.

A group of The Council of State Governments’ members recently visited Esri to discuss how to use data and apps to make better policy decisions in their states. “More mayors lose their jobs over snowplowing than any other reason,” said Esri while flashing a map on a screen showing how data can be used to help make better decisions about snowplow deployment.

The City of Coquitlam was an early adopter of a multi-purpose approach to online mapping. Over the years, it has created several public-facing and internal web maps, using this classic method with success. The city’s interactive, web-based map gives Coquitlam residents access to information about municipal services and features.

The European INSPIRE validation and conformance testing group has worked hard to get the Abstract Test Suites for INSPIRE Network Services defined and the requirements listed for the commonly agreed INSPIRE validator reference implementation. This August, the first version will be ready for use with the first release of the INSPIRE Test Framework.