Watersheds can have an impact on human health, help to create a sustainable economy and maintain ecological health for their surrounding communities. Karissa Reischke, GIS Environmental Data Coordinator at Conservation Ontario, wanted to put together a resource that would show, for the first time, an overall perspective of the state of Ontario’s watersheds. Drawing from Conservation Authorities' local data, she created a new story map, “A Provincial Story of the Conservation Authority Watershed Report Cards”, our April App of the Month.

Collecting data can be difficult in small communities. A lack of resources and staff can affect an organization’s ability to produce and share reports. Sharing complicated information and data with the population has been a challenge as each Conservation Authority found when they began to issue their own report card.

Therefore, in 2016, Karissa took the initiative to create an application that would not only include data from all the province’s conservation authorities but also tell a story. Using Conservation Ontario data from 2013, in addition to Environment Connections’ open data from ArcGIS Online, she released the first iteration of “A Provincial Story of the Conservation Authority Watershed Report Cards” in September 2017. 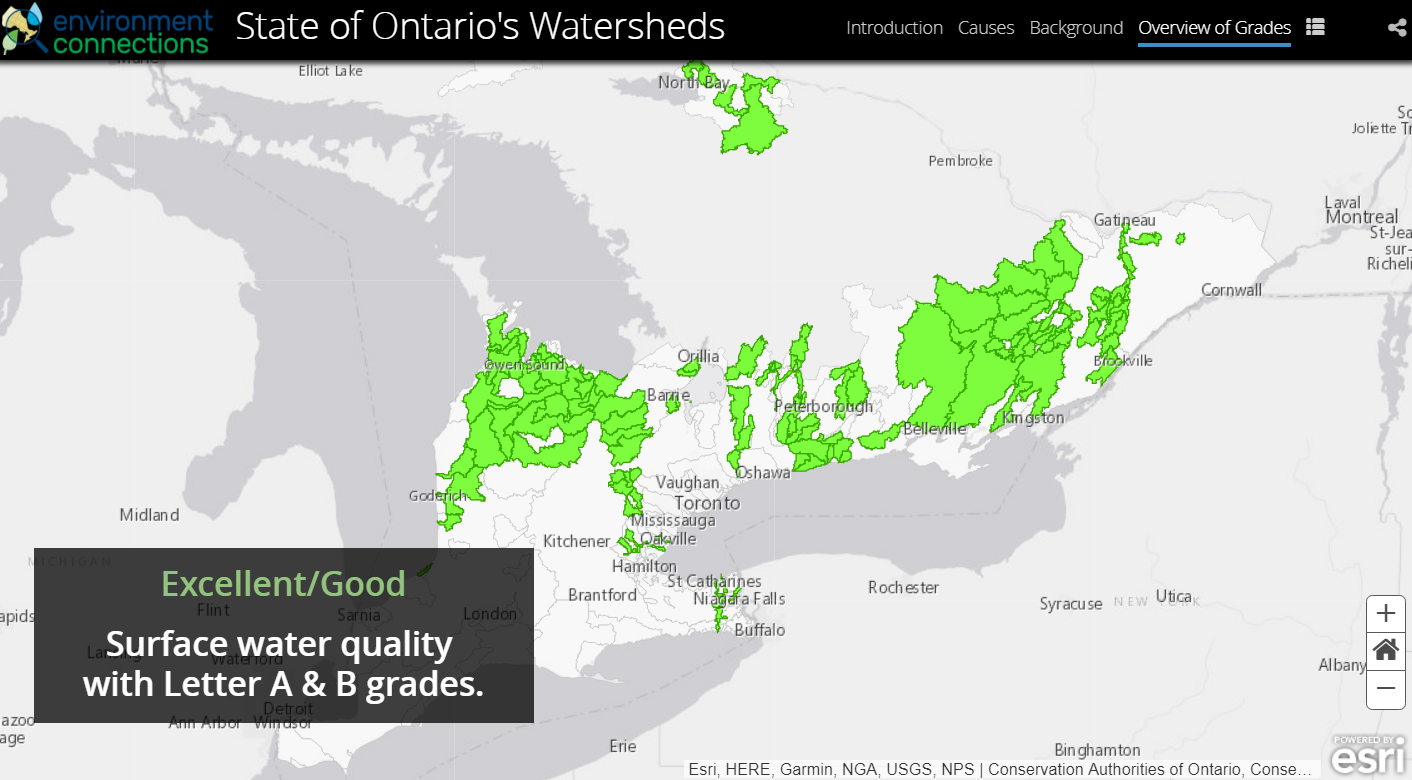 Karissa said choosing ArcGIS Online was an easy decision, as she found the templates and galleries on the website helpful to quickly visualize data.

To do so, she collaborated with the 36 Conservation Authorities in Ontario, staff at Conservation Ontario and the watershed report card committees.

Karissa said choosing ArcGIS Online was an easy decision, as she found the templates and galleries on the website helpful to quickly visualize data. She describes the grey basemap and colour patterns useful for identifying and highlighting important areas.

“The overall look and feel of ArcGIS Online felt quite intuitive,” says Karissa. “Even though it was my first time using the Story Map Cascade templates, the wealth of online resources allowed me to move forward with confidence.”

She used World Water Monitoring Day (September 18, 2017) as the first opportunity to promote the app through email blasts to stakeholders, the Ministry of Environment and Climate Change and partners. The story map is also featured on Conservation Ontario’s website and on their report card website - "Watershed Check-up". Karissa hopes the public will take the opportunity to use the app to keep abreast of surface and ground water quality, and learn more about forest conditions in their area.

“The story map provides a central place to easily and interactively access report card information from all of the 36 conservation authorities. It also provides a visual and user-friendly way to understand the state of Ontario watersheds in terms of water quality and forest evolution,” adds Karissa.

Having data compiled in such a simple way is a time saver and has facilitated better communication among various authorities. Organizations that were initially hesitant to share their data are now coming forward in the wake of the story map’s success.

The app has been a great way for Conservation Ontario to share information and showcase value to other organizations. The most appreciated feature, so far, has been the interactive aspect of the app. With 1,225 app views this past year, Conservation Ontario is looking forward to further increase this number especially since they've just launched a second set of 2018 Conservation Authority watershed report cards. The story map has been updated with the new data and was promoted on World Water Day (March 22).

In the future, Karissa is planning new additions to the app that will include a built-in section that shows improvements or decline in water quality and forest conditions across Ontario.

Don’t hesitate to share your thoughts and impressions about the “A Provincial Story of the Conservation Authority Watershed Report Cards” app. Leave a comment below.