Jake Wall is one of two students who received best student presentation awards, sponsored by Esri Canada, at the Canadian Association of Geographers (CAG) 2015 Annual Meeting in June. Jake recently completed a Ph.D. in Geography at the University of British Columbia that focused on the movement of African elephants.

"Wildlife" for many Canadians means raccoons and skunks, the occasional deer or moose, and maybe wolves or bears. For Jake Wall, who lived in Kenya during high school and then in southern and eastern Africa between undergraduate and graduate studies, wildlife also includes lions, rhinos as well as elephants.

After receiving a B.Sc. in Physics and a M.Sc. in Geography with a focus on RADAR remote sensing (both from Queen's University), Jake felt it was "very natural to get involved in the research and conservation of elephants" given his interest in African wildlife. He decided to pursue a Ph.D. at the University of British Columbia in the Lab for Advanced Spatial Analysis where his research focused on the movements of African elephants.

Watch this video on how Jake Wall used the Esri Chronological Analyst extension for ArcGlobe to animate elephant tracking data.

One of the challenges Jake encountered in his work was a lack of tools for conducting the specialized analyses that are a part of movement ecology, which is the study of organisms' movements in relationship to their environment and other organisms. To overcome this challenge, he developed custom tools for ArcMap using C# and the ArcObjects SDK . He has made many of the tools freely available through a package called ArcMET: Movement Ecology Tools for ArcGIS.

At the CAG 2015 Annual Meeting, Jake presented a paper titled "African Elephant Conservation: New Spatial Approaches Bring New Understanding." It examined 15 years of GPS tracking data for two species of African elephants to try to improve understanding of their ranging behaviour. Significant differences were found in the elephants' range areas depending on the gender of the elephant and the ecoregion where it lived (Desert, Savannah, Bushveld or Forest) and a host of other factors, such as vegetation health, the presence of humans, terrain and the intersection of a range with a protected area.

The data were provided by Save the Elephants (STE), an organization that studies and monitors elephants in Africa, and works to raise awareness of, and protect elephants from, the threats of poaching and human encroachment into elephant habitat. Through STE's tracking projects, GPS tracking collars are attached around elephant's necks. Data are transmitted via cell phone networks or satellite phone connections. 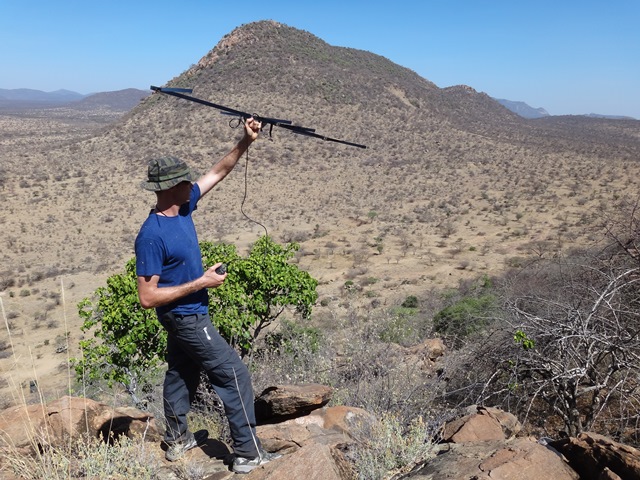 Jake Wall using a Yagi antenna in Samburu Reserve, Kenya, to locate a collar for replacement after the GPS had stopped working.

Jake has worked with STE to develop a tracking system that allows elephants to be tracked in real-time and also identify changes in movement, such as slowing down over time or an extended period of immobility that might indicate an elephant has been injured or poached. He is continuing his research work on elephants as a post-doctoral fellow at Colorado State University.