Most fourth-year engineering students are focused on their final projects, labs and exams, and on getting that first full-time job. However, a group of students in Geodesy and Geomatics Engineering at the University of New Brunswick devoted their time and energy last year to organizing the first National Geomatics Competition. Learn more about these students, the results of the event, and where the competition will be held in 2019.

The National Geomatics Competition (NGC) started out as a pipe dream for a group of students at the University of New Brunswick (UNB). Founder and chair of the organizing committee, Justin Collett, was inspired by participating in other engineering conferences and wondered, “why couldn’t we do this for geomatics?”

The idea for a geomatics competition came to Mr. Collett when he participated in the World Mining Competition hosted by the University of Saskatchewan in October 2016. Early the following year, a committee was put together with the goal of organizing a competition and conference that would:

The committee’s efforts were rewarded when both sponsors and delegates started signing up in the fall. In all, nine teams from six post-secondary institutions across the country participated in the first competition, which was held on February 17, 2018, at UNB. Students were presented with a scenario then given six hours to devise a solution and prepare a presentation for the judges. The guidelines they were given were: establish a flood map of the area around Karonga in Malawi; define a system to monitor river and lake erosion and lake water levels; create a GIS to store and share data; and educate local residents on the benefits of the system. Each team was judged based on the societal benefits, economics, data storage and GIS, feasibility and education of their proposed solution.

The scenario for the competition was proposed by the NGC VP Academic Alex Turner, a masters student in Geodesy and Geomatics Engineering. Having spent a summer teaching and conducting research in Malawi, he was familiar with the problems faced by the local population and thought it made a great deal of sense to have the competitors try to bring innovative solutions to those problems. One challenge that Alex faced when developing the competition guidelines was making them broad enough to give students with different backgrounds an opportunity to showcase their skills and knowledge. The six-hour window that teams were given to craft their solution made quality team communication imperative, and although the competitors were under a lot of stress in that time, they can all look back at it and smile. David Recchia, one of the competitors from York University, confessed that he and his team were indeed initially overwhelmed but ultimately proud of their solution. 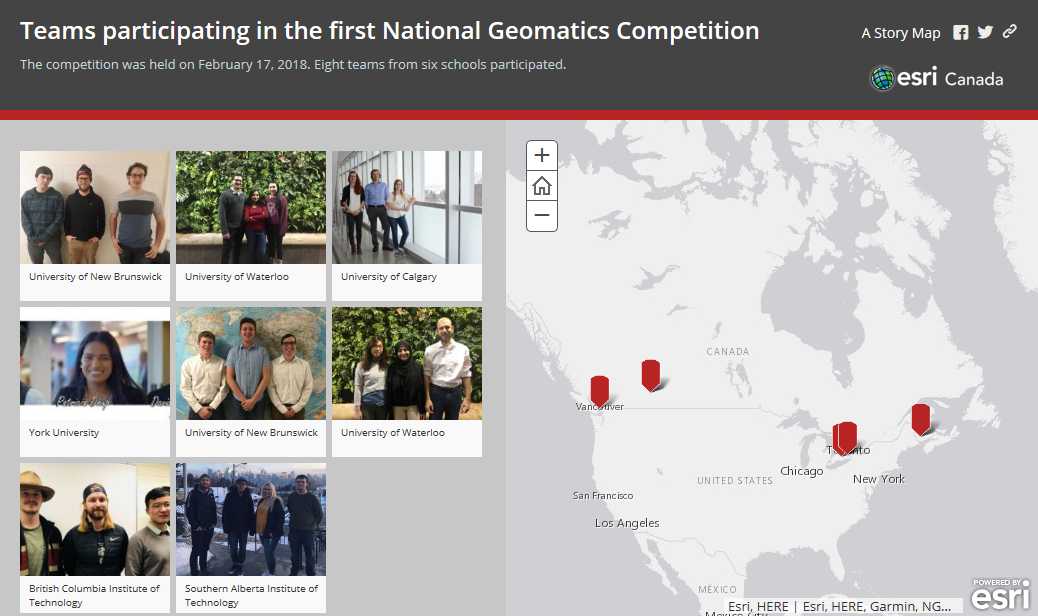 Participants at the first NGC travelled from as far away as Vancouver, B.C., to participate in the event.

The day after the competition, participants were joined by members of the Atlantic Geomatics community as they listened to talks by representatives from the conference sponsors on the past, present and future of geomatics technologies and the geomatics profession. Dr. John McLaughlin, Professor and President Emeritus at UNB, was the keynote speaker and provided reflections on his life in geomatics.

The winners of the competition were announced at an awards gala dinner. First place was awarded to one of the teams from UNB. Their solution included a grass roots approach to engage the local community, use of innovative technology such as drones for large scale mapping, and a ‘Talking Titler’ land administration system. Solutions proposed by other teams included culturally sensitive boundary demarcation, public participation using smart phones, and Artificial Intelligence (AI) powered water models.

Plans are underway for the second NGC, which will be held February 22-25, 2019, at the University of Calgary. The organizers hope to increase the number of participating schools as well as continue to build strong partnerships between academia, professional associations and industry. Over twenty sponsors have already signed up, including Esri Canada, provincial land surveyor associations, and mapping and surveying companies. In addition to the NGC competition and conference, the 2019 schedule includes a hackathon for graduate students and faculty and the Geomatics Engineering Student Society’s annual geomatics exposition. Visit the NGC’s website or follow them on Twitter and Facebook to stay up-to-date as NGC 2019 approaches.