GIS is an important tool for archaeological work. Find out how Kendra Garbutt, the 2016 Esri Canada GIS Scholarship recipient from Mount Royal University, used GIS to study social structure in the ancient city of Meroë in Sudan.

Archaeologists study the human past through material remains. One of the types of remains most commonly found at archaeological sites are sherds or pieces of broken pottery. For her Honours project for her Anthropology degree at Mount Royal University (MRU), Kendra Garbutt mapped over 300 amphora sherds from the Meroë collection at MRU to look for patterns that might provide information about the social structure of Meroitic society. 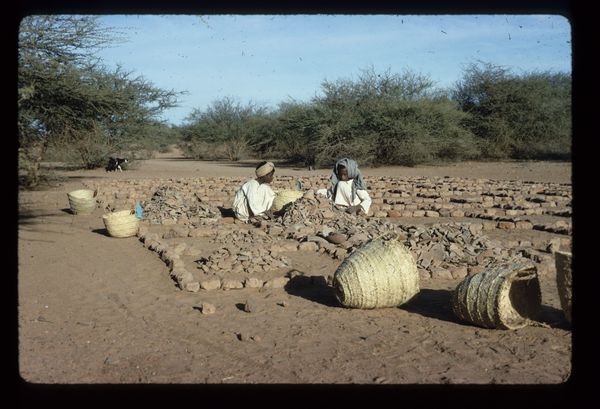 Kendra’s one of the 2016 Esri Canada GIS Scholarship recipients, and I asked her via email to tell me more about her project.

KA: What are amphora sherds and why are they important?

KG: Amphorae (sing. amphora) are ceramic vessels used primarily to ship liquid goods by sea. Their shape and material composition often indicate where they were produced and in some cases their original contents. Amphorae were predominantly used to ship wine, olive oil, and fish products, and the vessels were often discarded once they were empty. Using the broken pieces of amphorae (known as shards or sherds), an archaeologist can try to piece together the original form of the vessel. The process is similar to completing a dusty, frustrating jigsaw puzzle. Oftentimes, it isn’t possible to reassemble an entire vessel. If you do get a diagnostic piece, you can infer the amphora type or class. Diagnostic pieces are those that are indicative of a specific feature of an amphora such as the base, rim or handle. In the case of Meroë, there were very few whole amphorae uncovered, and those were not available to me for the study, so I had to rely on the sherds. Other diagnostic pieces can include sherds that have stamps in the clay that are sometimes from the producer of the amphora and sometimes from the producer of the contents of the amphora.

The presence of amphora sherds at Meroë is important because it’s very likely that they were imported based on their probable contents and their composition, which differs considerably from ceramic material known to be of local origin. The distance of Meroë from the Mediterranean world and the difficulties in transporting bulky ceramic vessels up the Nile and then overland suggest that the goods they contained would have been extremely expensive.

KA: How did you use GIS to analyze the sherds?

KG: I used ArcMap to place each of the sherds on a georeferenced map of the Meroë excavation site. By tailoring the symbology of the sherds, I identified patterns of deposition. Most of the sherds were clustered in former temple structures in stratigraphic layers associated with abandonment and destruction. This means that the sherds could not be used to identify social stratification, which answered my research question. It may be possible with further research to discover why they were so concentrated in place and time. 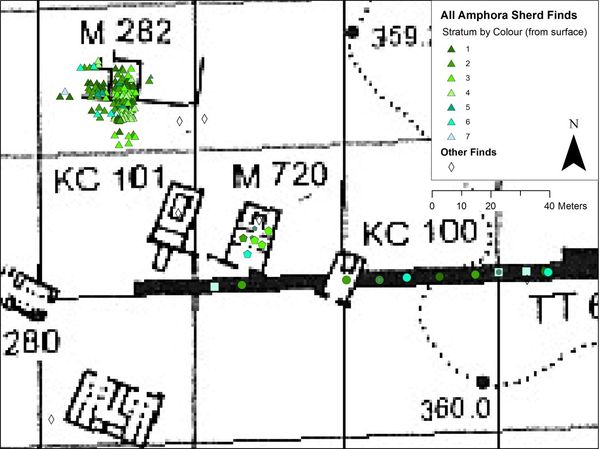 The final aggregate map of the amphora sherds used in the study. Different symbol shapes were used for different concentration areas, but the colours for each archaeological stratum (layer) were uniform.

KA: Why did you choose to study archaeology?

KG: I've been interested in archaeology since I was a little girl, and the opportunity to study what I love was too hard to pass up. Not only does archaeology offer insight into our past, present and future, it requires the development of a wide assortment of skills from many disciplines, including science, math, geography and the arts.

KA: Do you think it’s important for archaeologists to develop skills in GIS?

KG: GIS skills are crucial to archaeologists! Archaeological sites are composed of features over a landscape, whether that landscape is massive, minuscule, on a mountain's peak, or beneath the sea. Linking those features to specific points on a map before you remove them from their contexts allows you to visualize and analyze the artifact itself, its relationship with its surroundings and its importance at the site. The history of archaeological practice itself is rife with examples of artifacts being misinterpreted or misplaced in history or context, and GIS helps to dynamically place the artifact in both place and time.

I began using GIS in 2014 at Mount Royal University at the urging of one of my archaeology professors. He advised that archaeological work in the future would be increasingly reliant on technology, and GIS was a sure-fire way to improve my skills and increase my appeal to employers.

KA: Are you currently working on any GIS projects?

KG: I’m still working with MRU on a project that was started last summer alongside Dr. Lynn Moorman, Dr. Dorothy Hill, and Alice Liboiron. We’re creating a map for birdwatchers in southern Alberta using Collector for ArcGIS. This Collector map is specifically tailored to Mountain Bluebird watchers and conservators, as Mountain Bluebirds require very specific criteria for creating nests, laying clutches of eggs and raising their young to adulthood. Mountain Bluebirds are under threat from habitat loss, and this Collector map is a bid to allow mobile data collection of bird box information to help conservators easily create, share and access data. This project is still ongoing and not yet shared with the public, but you can learn about bluebird conservation efforts from the North American Bluebird Society website.

KA: What are your future plans?

The Esri Canada GIS Scholarship has already benefitted me in my studies! Having a personal license means I can use the program at home, which has been tremendous. The Scholarship Portal has allowed me to correspond with individuals who use similar methods or share my interests, allowing me to create contacts around Canada.