For most of us, getting from A to B is fairly straightforward. But there is a whole world of complexities that make it far more challenging for logistics professionals to successfully move goods. Let’s uncover just a tiny bit of that complexity through this article.

Many years ago, I had the opportunity to work for a local courier company delivering packages around the Greater Toronto Area. It was immensely enjoyable yet also very demanding. Depending on what I was doing at the moment, the harsh chirp of an incoming SMS message on my (single-colour alpha-numeric) cell phone / two-way radio was either welcoming or infuriating. This was quickly followed by an impatient voice over the radio barking “Arif! What’s your 20!?”

That ominous voice was my dispatcher trying to determine if I was in a good spot to pick up a rush order, or if he believed somebody else was located more conveniently to do the pickup.

Unknown to me at the time was that there were many more variables that my dispatcher was considering that ultimately made the decision; workload, next destination, vehicle capacity, time constraints, how many orders were already on board, how busy the driver was and even how much money the driver had made that day. All this across a fleet of nearly two dozen drivers, young and old, driving all types of vehicles, also of varying ages.

My dispatcher was a man in his 40s (although he looked 20 years older). He worked in a glass box with two computer screens, a phone, a wall of slots, index cards with scribbles that migrated between the slots on the wall, a radio console to communicate with the drivers and a neglected chair. He was magnificent. Orchestrating a symphony of drivers and their vehicles around the city ensuring customers got their packages when and where they expected.

These days, there are few people who can command a role like that using the tools that my maestro had available at the time.  Especially if you consider how easy it is today to get a few moving dots onto a map and request turn-by-turn directions along with traffic congestion updates in real-time. Consumer-level routing has become ubiquitous and simple. However most dispatchers today know that consumer-level tools simply cannot meet the demands of a professional.

The Transport Canada 2016 Annual Report identified that the transportation and warehousing sector, representing 4.5% of total Gross Domestic Product (GDP) in 2016, grew by 3% in the past year, which is more than double the growth rate for all industries. Driven by the proliferation of online shopping over the last decade and continually increasing expectations of same day (if not next hour) delivery, professional dispatchers must embrace some level of automation, or as some like to call it – artificial intelligence – to help augment the task of dispatching.

I often like to imagine what might be the ideal scenario for a dispatcher. I see their day beginning well before dawn, glancing at a report of unfilled orders from the previous day combined with new orders pre-loaded into a scheduled route for each driver. The individualized optimal route would begin at the drivers’ respective starting points and at their preferred start time. The pickups and deliveries for each driver would be tailored for their vehicle type, capacity and zone preference. The schedule would be determined based on the anticipated traffic volumes along each route for the whole day. Orders would be distributed evenly across the available drivers and would position the drivers strategically across the city so that they would be in favourable locations for anticipated upcoming orders. Most importantly, for a courier company like I worked for, each driver would only have enough orders to keep them busy for a couple of hours so they could accept rush orders that came in throughout the day. 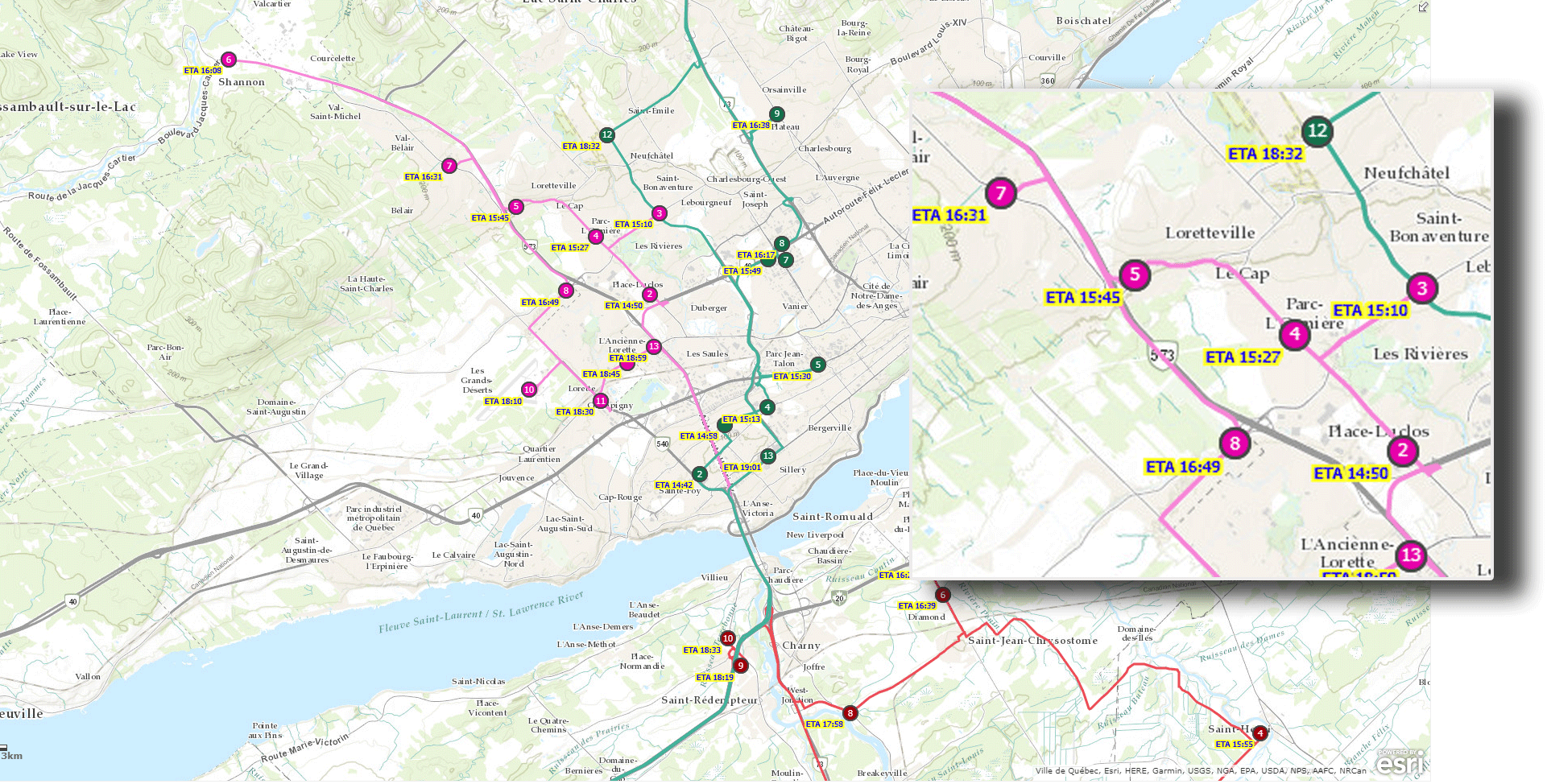 Optimized routes, identifying each driver by colour, showing the sequence number and Estimated Time of Arrival for each order.

As rush orders are received, they would be automatically geocoded (based on postal address into a latitude/longitude coordinate) which would generate a point on a map. The dispatcher could then click on any driver on the map and immediately know the impact on the ETA (estimated time of arrival), driving distance and existing order delay if that driver were to pick up the rush. The dispatcher would be able to click through many drivers to quickly evaluate the options available at that time. The dispatcher would also have additional context at their fingertips as well; perhaps a weather overlay to see if inclement weather might impact the decision, or current road closures that would prevent an otherwise obvious choice from becoming a late delivery, or even a pavement condition map predicting a very bumpy ride. With all this information, the dispatcher would make an intelligent decision and assign the new order, all in a matter of seconds.

The lucky driver’s route would get re-optimized and the updated route would be sent directly to the driver’s mobile device so they could see the new order and best route to get there on time. Courier drivers could choose to receive the order as a simple SMS text message, as a location on a map or as a link to be launched in their preferred traffic navigation app on their phone. The choice is theirs.

As drivers complete each order, they could mark it complete on their mobile device, or have the orders’ status updated automatically using geo-fencing. Since each drivers’ mobile device has a GPS, dispatch would get notified in real time about what each driver is doing and how well they are adhering to their pick-up/delivery plan. ETAs are updated automatically and customers can even receive real-time updates about when their orders are estimated to be fulfilled.

Management would also see this information in dashboards viewable from any mobile device so they can keep up with the day’s activities and observe critical performance metrics, foresee problems and mitigate issues before they occur. 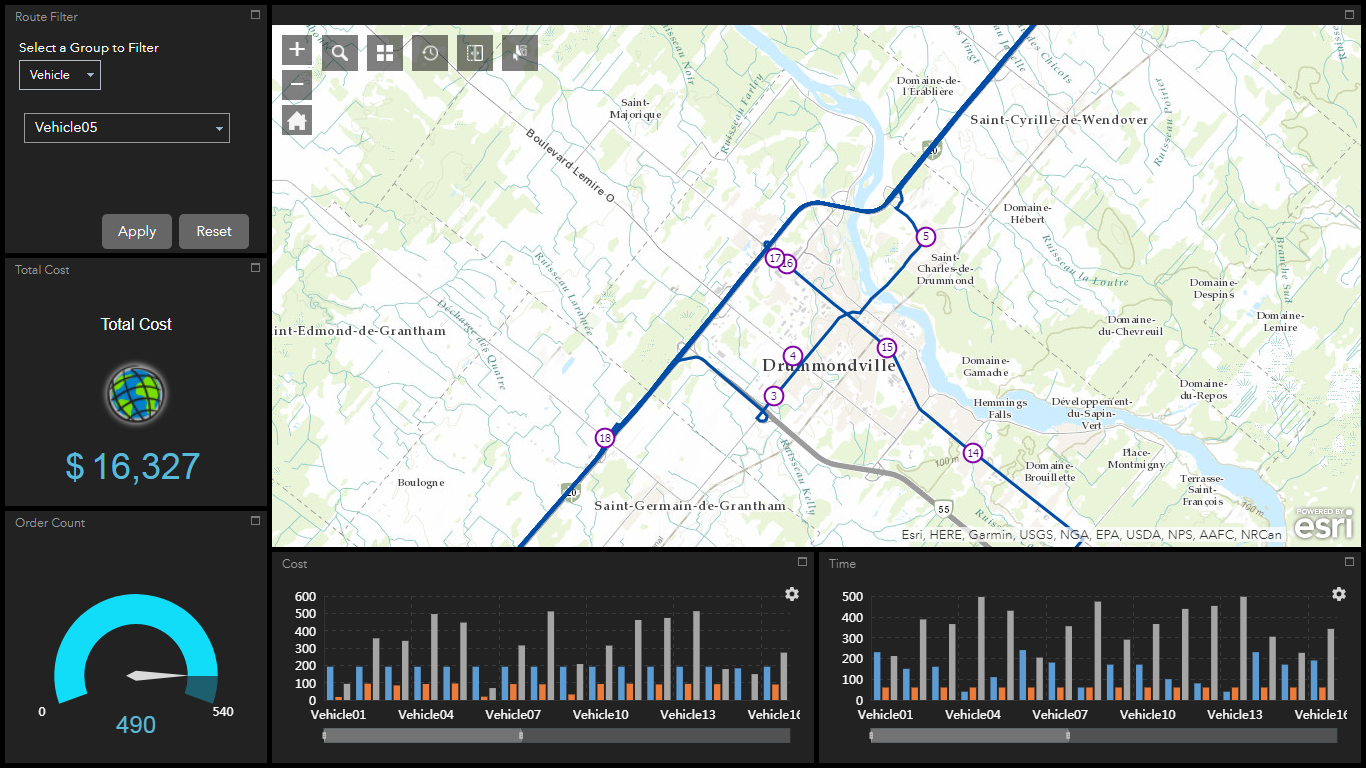 A dashboard depicts activities, critical performance metrics and allows management to mitigate issues before they occur.

After each shift, every driver’s mobile device would have automatically generated a detailed time & location stamped log of their activities. The actual data could be compared to the plan and anomalies highlighted using business intelligence tools so someone could examine the data and identify where and how operations could be improved for the next day’s runs.

I always wondered why my dispatcher worked alone within a glass box. I later learned that it was to save his co-workers from the relentless stream of profanities emerging from within. Although I never had the opportunity to try his job, I simply stared in awe at the utterly magical performance conducted each day. Dispatching is extremely demanding, and anyone who does the job has my respect. Perhaps if my dispatcher from back then had the technology that is available now, he wouldn’t have had to work from inside that glass box…

I’m interested to hear your thoughts and comments on how a dispatcher’s job could be augmented using the wide array of geospatial technology we have available today. Let’s continue the conversation below!