“For the first time, we’ve established a database with accurate information that we could refer to in order to identify at-risk households. This will help us better analyze the data and plan more effective fire prevention campaigns.”
- Gary Laframboise, Chief Fire Prevention Officer, Oakville Fire

How old are the smoke alarms in your home? Did you know that to properly maintain them, you need to test the alarms every month and replace them before their expiry date?

In Oakville, a town west of Toronto with 188,900 people, the local fire department does an annual door-to-door campaign to educate residents on the proper use and maintenance of smoke detectors and carbon monoxide (CO) alarms in homes, as well as talk about fire safety.

“We’ve conducted this public education program for many years; however, we haven’t consistently collected data to help us track the success of our efforts,” said Gary Laframboise, chief fire prevention officer at Oakville Fire.

Prior to 2016, the Town’s firefighters used paper forms to record residents’ feedback. However, there was no system established to track and compile feedback year over year, which would allow for analyses such as identifying at-risk households that could benefit from follow-up visits. To address this challenge, Oakville Fire reached out to the Town’s Information Technology group as well as the Strategic Business Support group, which included the Geospatial Services Solutions team headed by Frank Goehner.

“I had just read a blog about new field data collection apps in ArcGIS and thought that apps such as Survey123 could be a good solution to address our fire department’s needs,” said Goehner.

With more than 66,700 households in Oakville, it would be impossible for the Town’s nearly 200 firefighters to inspect every house within a two-month period (from late May to end of July 2016). Since smoke alarms typically have an expiry date of 10 years, the team narrowed down the survey targets to homes built between 2004 and 2006.

Staff used ArcGIS Online to map building permit data from the Town’s permitting system and identified 4,500 homes that met their criteria. Visualizing the data on a map allowed the team to see the density of the targets and effectively plan how to divide the firefighters into crews and determine the neighbourhoods where they should be dispatched. 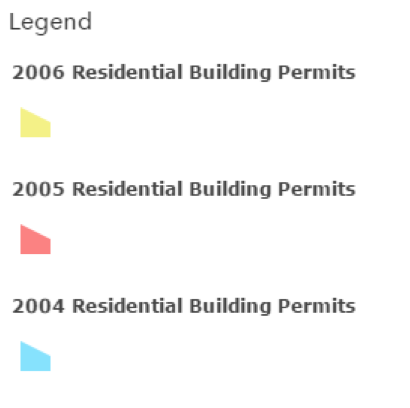 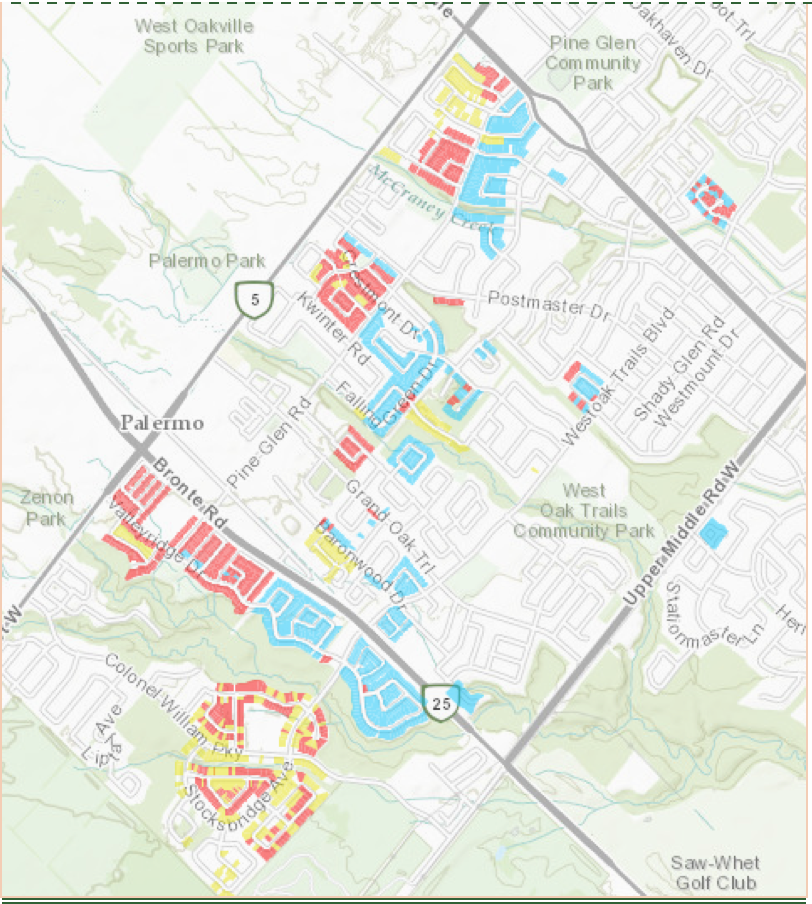 Mapping building permit data in ArcGIS Online allowed the team to quickly identify the location of homes built in 2004-2006 for the survey.

After the survey targets were identified, the team proceeded with creating a mobile app in Survey123 for ArcGIS that firefighters could access on smartphones.

“We needed an app that would be quick to deploy and easy for our firefighters to use,” said Goehner. “Since most of our staff were familiar with spreadsheets, we decided to build an Excel-based survey that will connect easily with Survey123.”

Survey123 includes a desktop tool called Survey123 Connect that works side by side with Microsoft’s XLSForm authoring tool for creating XLS files. The tool allows authors to preview XLSForm files as they edit them. It also publishes the forms into ArcGIS Online or Portal for ArcGIS and creates feature services based on the specified form for data collection.

Building the survey form in Survey123 was relatively straightforward once the team decided on the questions to be asked, their sequence and exact wording.

“We wanted the survey to be brief and concise—something that could be done within 5-6 minutes,” noted Laframboise. “We designed the questions to provide fire safety information, as well as gather data about the resident’s level of knowledge about fire safety and prevention.”

The team created a 10-question survey with conditional logic, where succeeding questions were asked based on the resident’s initial response. For example, if a resident was home and said they were available to take the survey, the app prompted the firefighter to introduce the Town’s fire home awareness program, advise the resident that their home was now more than 10 years old, and explain that the law requires smoke and CO alarms to be replaced within the timeframe stated in the manufacturer’s instructions or a $235 fine could be issued for non-compliance. 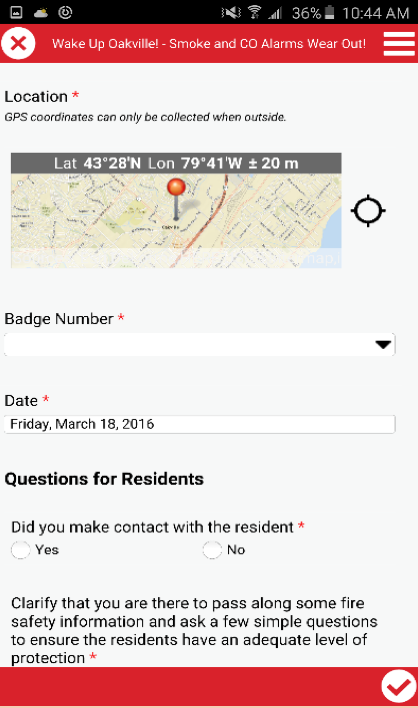 Firefighters accessed the Survey123 app on Android smartphones. The app prompted them to ask questions or provide fire safety information based on the respondent’s answers.

Once the structure of the survey was finalized, the team published the form in ArcGIS Online and used the Survey123 website to share the form and any revisions to the survey with firefighters equipped with Android smartphones.

At first, the team received some pushback from fire crews who were used to conducting the survey with pen and paper.

To help them become familiar with the digital survey, fire trainers were assigned to teach firefighters how to use the app. They leveraged how-to documents and video tutorials created by staff. This turned out to be more effective than having the GIS team deliver the training because fire trainers were more knowledgeable about firefighters’ workflows and could speak their language.

The nearly 200 firefighters were divided into 50 crews of four. About 10 crews were deployed to do the surveys per shift. Each crew was given a Samsung Galaxy S5 smartphone equipped with the Survey123 app and a single-user subscription to ArcGIS Online versus an organizational account. This enabled all the devices using the Survey123 app to be managed in one account and viewed on a single map. As well, this model made updating revised surveys into the devices much easier. The team also created another account that would allow managers to view the collected data.

To monitor the firefighters’ exact location during the surveys and prevent any overlap, staff installed a GPS app on the phones, which significantly improved positional accuracy.

Getting buy-in from Oakville’s fire chief and senior management was not difficult after they saw the amount and kind of data collected via the app. Using Operations Dashboard, another app in ArcGIS, staff created an online executive dashboard that gave managers a real-time, comprehensive view of survey operations. 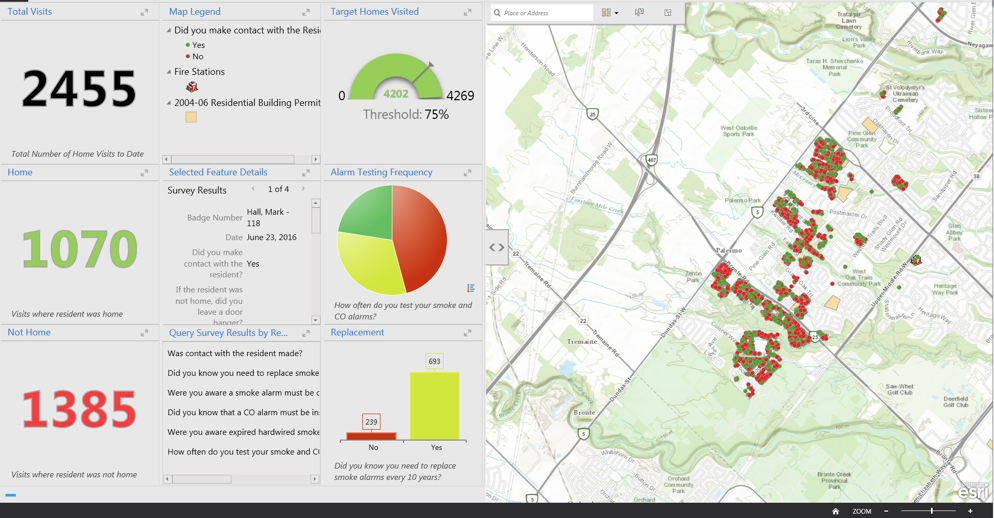 Using Operations Dashboard, Oakville’s fire chief and managers were able to view the progress of survey operations in real time.

In the nine weeks in 2016 that firefighters conducted home surveys, the Town was able to gather data from more than 4,000 households.

“For the first time, we’ve established a database with accurate information that we could refer to in order to identify at-risk households,” noted Laframboise. “This will help us better analyze the data and plan more effective fire prevention campaigns.”

Oakville Fire’s HAP app also serves as a blueprint for other survey apps. The department is already planning to conduct a similar survey focused on reducing cooking fires, which is the top cause of residential fires in the town.

It is also looking into integrating the collected data with Esri Community Analyst to help determine areas for the next survey in fall 2017. As well, the department plans to bring fire call information from its other data visualization system into ArcGIS to analyze hotspots.