Over the past several years, GIS has been incorporated into a growing number of programs at colleges and universities in Canada, including the Community Safety programs at Georgian College. Find out more about the program and one course project that has become part of an anti-graffiti city initiative in Orillia.

“If you ignore it, you allow it.” That’s the slogan for Orillia’s anti-graffiti initiative that was started two years ago as a partnership between the city, the OPP and students in the Community Safety programs at Georgian College. The students started out by identifying and mapping instances of graffiti in the city.  After helping with clean-up, they re-visited the identified areas a couple of months later to map any re-occurrences.

Although Georgian College has been a participant in the Esri Canada GIS Scholarship program through its Environmental Technology program for the past several years, I wasn’t familiar with how GIS was being used in other programs at the college. I asked Joshua Barath, a professor in the Community Safety program, via email to tell me more about the role of GIS in public safety and in their program.

JB: There are many uses of GIS in the field of public safety, ranging from law enforcement, fire and emergency services, emergency and disaster management, and national security and intelligence. Police forces have been using geospatial information to build real-time maps of criminal activities that can be turned into actionable intelligence for front line officers and focused patrols. Fire and emergency services use GIS to map out calls for service and evaluate the allocation and deployment of resources. Emergency and disaster management organizations have used GIS technologies to plan for large scale events, explore the impact of natural disasters and track the progress of recovery efforts.

KA: Do these different organizations such as police, fire, emergency and disaster management also collaborate on public safety issues?

JB: A great deal of work has and continues to be done in relation to planning, collaboration and response by public safety organizations. More and more public safety agencies are working collaboratively to create blueprints for smart, safe and sustainable communities that include the use of GIS technologies to collect data, share information and accurately paint pictures of public safety issues. In today’s connected society, there are countless sources of geospatial information that can be utilized as part of the collaborative process to visualize past, present and future patterns by linking available data in meaningful ways.

KA: How is GIS incorporated into the Community Safety program at Georgian College? Has this changed since it was first introduced?

JB: Georgian College offers several Community Safety programs, including community and justice services, police foundations, protection security and investigations diploma programs, as well as an Honours Bachelor of Police Studies degree. Over the past few years, GIS has been incorporated into several programs, providing students an understanding of geospatial information technologies as well as applications of GIS to real world issues in the field of public safety.  At first, the presentation of GIS in the programs was done primarily through demonstrations and case study analysis; however, over the last two years, this has changed to include hands-on learning and applications to real world situations.

KA: Do students typically have any knowledge of GIS when they come into the program?

JB: Students come with knowledge of using GPS devices for tracking movement such as fitness, identifying locations of interest through web based mapping programs and plotting routes or directions. Given that public safety organizations have been looking towards technologies such as GIS to assist in the delivery of services and management of challenges, students have become more aware of the use of GIS technologies in the field. For example, many police agencies provide some form of online crime mapping via their agency website, so students have foundational knowledge of how such tools can be used in police practices.

KA: How do they react when GIS is first introduced?

JB: At first, when the tools were introduced to students, they are a bit uncertain about their skill level. But, what we see is, once students are provided the opportunity to draw linkages between the foundational knowledge they have coming into the programs and the applications of the tools within the field, they pick things up quickly and have a desire to learn more.

KA: Can you tell me about a project that students have worked on?

JB: One of the most impactful projects that was completed by students was the identification and mapping of graffiti through the application of GIS technologies. The clean-up and awareness campaign was a joint project between students and public safety officials to address issues of graffiti in the community. Students compiled research that identified and geographically mapped points of graffiti within the city. They then partnered with community and justice agencies to get the community mobilized to clean up the graffiti that had been identified. Graffiti clean-up days were held on October 16, 2015 and June 2, 2016. 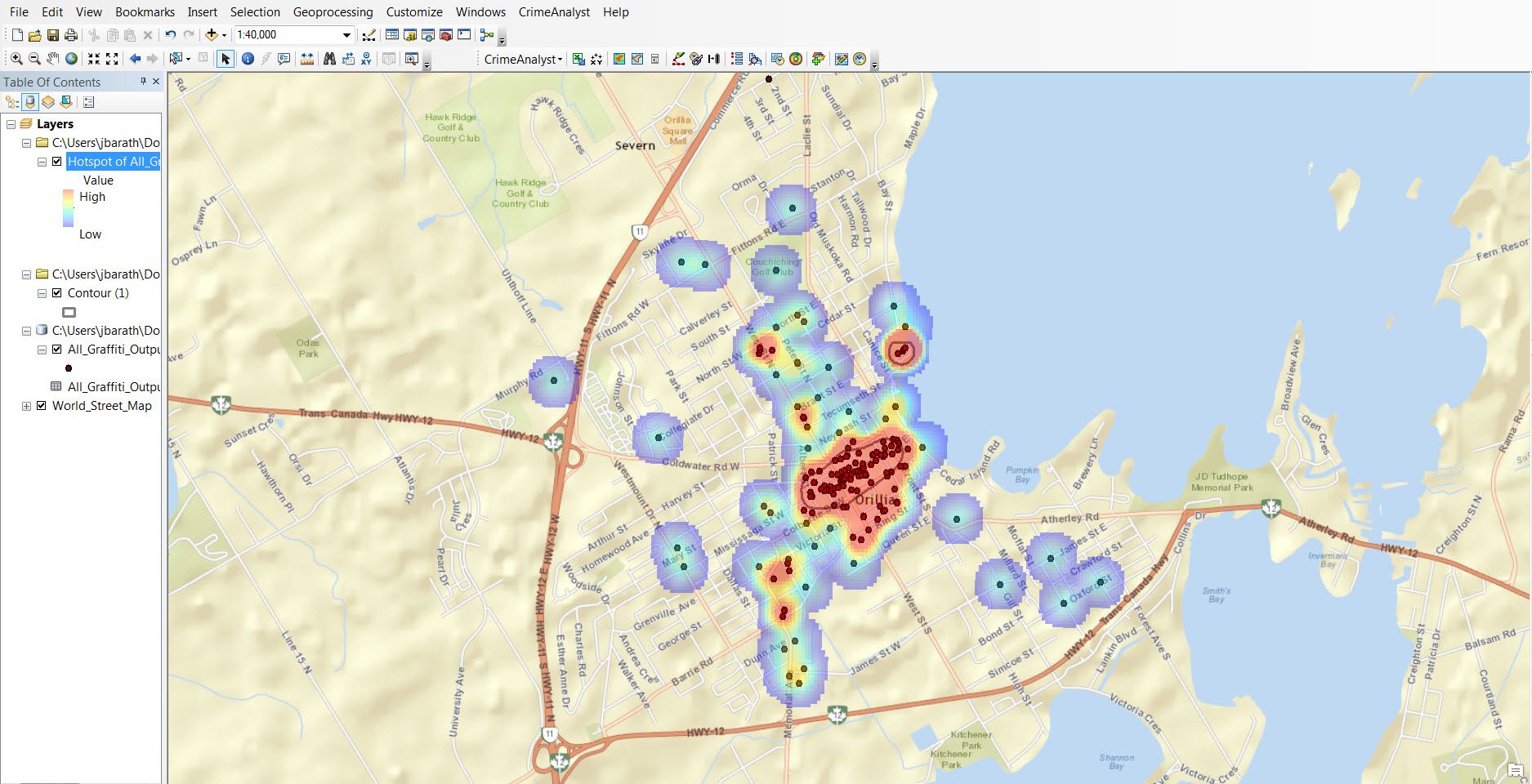 The incidents of graffiti identified by Georgian College students in Orillia are concentrated in the downtown area.

The students also presented their findings at a Police Services Board meeting in December 2015, as well as to the City of Orillia Council in early 2016, focusing upon education, awareness, reporting and clean-up. The success of this initiative was evident by the positive response of council members, as well as efforts by community and public safety organizations to collaborate further. The project has since been expanded to include longitudinal research being done by students from the Police Degree program with the goal of increasing the amount of actionable intelligence that can be made available to the city and local public safety organizations.