We live in a 3D world, so why don’t we view our GIS data in 3D? Well, there have been several technical barriers that were limiting the viewing of 3D data on the web. Over the years, these impediments have been addressed to the point where 3D Web GIS is nearly ready to go prime time. Read this blog to find out more about the barriers that have been overcome and what data and technology you need to start viewing your data in 3D.

January is generally the month when people reflect back on what happened in the previous year or predict what’s coming in the new year. Along with the internationally respected consultant Bruce McCormack, I recently published a blog in GoGeomatics Magazine entitled “Predicting the future of GIS in Canada.” So, I decided to focus this blog post on three-dimensional (3D) Web GIS – a technology that lots of people have needed and wanted for a long time. But its widespread use has been hindered for some time by the technology being either too expensive, too slow or too hard to use. However, recent developments now allow the use of 3D Web GIS in mainstream geospatial applications.

Traditional two-dimensional (2D) GIS data viewers have for many years provided an adequate view of map data from a single perspective (nadir – looking straight down). Users can generally change the colour and size of points, lines, areas and images plus they can pan and zoom around the map to their hearts’ content. Some “3D like” effects, such as elevation contour lines and hill shading, provide the user with a view that is sharp, easily understandable and has some depth perception elements.

However, the world is a 3D place and it’s sometimes difficult to get a complete understanding of a place or a concept without viewing the location from a non-nadir perspective. This is where 3D Web GIS comes in. It allows the user to view landscapes, cities or buildings from nearly any angle or perspective. Also, 3D Web GIS has all the good viewing features of 2D, which include colour changes, zooming and panning. 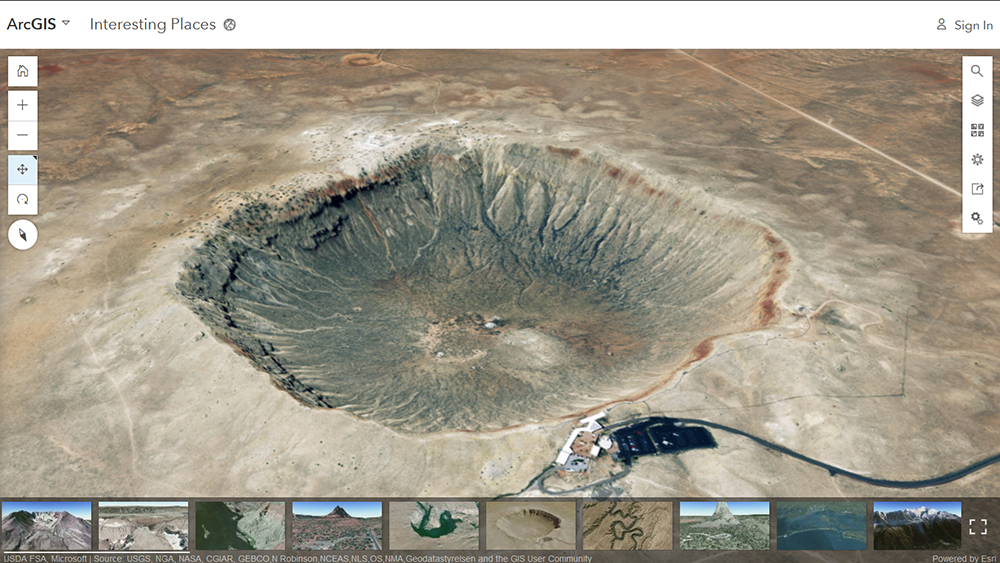 Check out this Web Scene to see how 3D allows users to visualize, analyze and communicate by enriching data and ideas with the context of the world around us.

So, what was so hard about implementing 3D Web GIS and why did it take so long to get to this point? The reason is that there were several technical barriers that have now been addressed.

The first major barrier was that common desktop and laptop computers did not have sufficient computing performance or high-performance graphics display technology to handle 3D data in an efficient manner. Users expect 3D visualization to be at least as fast as the traditional 2D visualization and until recently, it was not. GIS is beginning to benefit from many of the significant 3D technological developments created by the video gaming industry, which has made speedy graphics a mainstream technology.

The second barrier that was overcome was the availability of standard high-performance graphics software interface libraries, such as WebGL, SVG and HTML5, which are now available directly in modern web browsers, thus eliminating the need for browser plugins such as Silverlight or Flex. This development allows the GIS data display software to operate over the web on most common computers and operating systems without change.

The third barrier was how to feed the new 3D Web GIS viewers with 3D data, instead of 2D data. As one might imagine, 3D data has higher storage, handling and communication requirements than 2D data. While this issue has not yet been completely addressed and resolved, several streaming technologies are being developed to stream 3D scenes to conventional browsers in an efficient manner. Indexed 3D Scene Layer (I3S), in particular, is being developed by Esri and other companies and is also being considered by the Open Geospatial Consortium as a community standard for streaming 3D data. 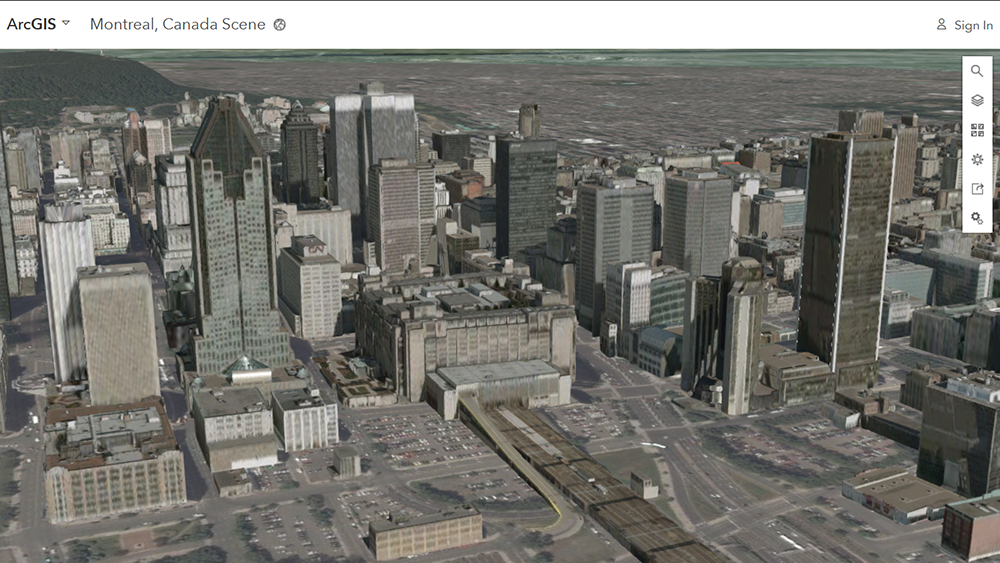 Check out this 3D scene view of the City of Montreal. 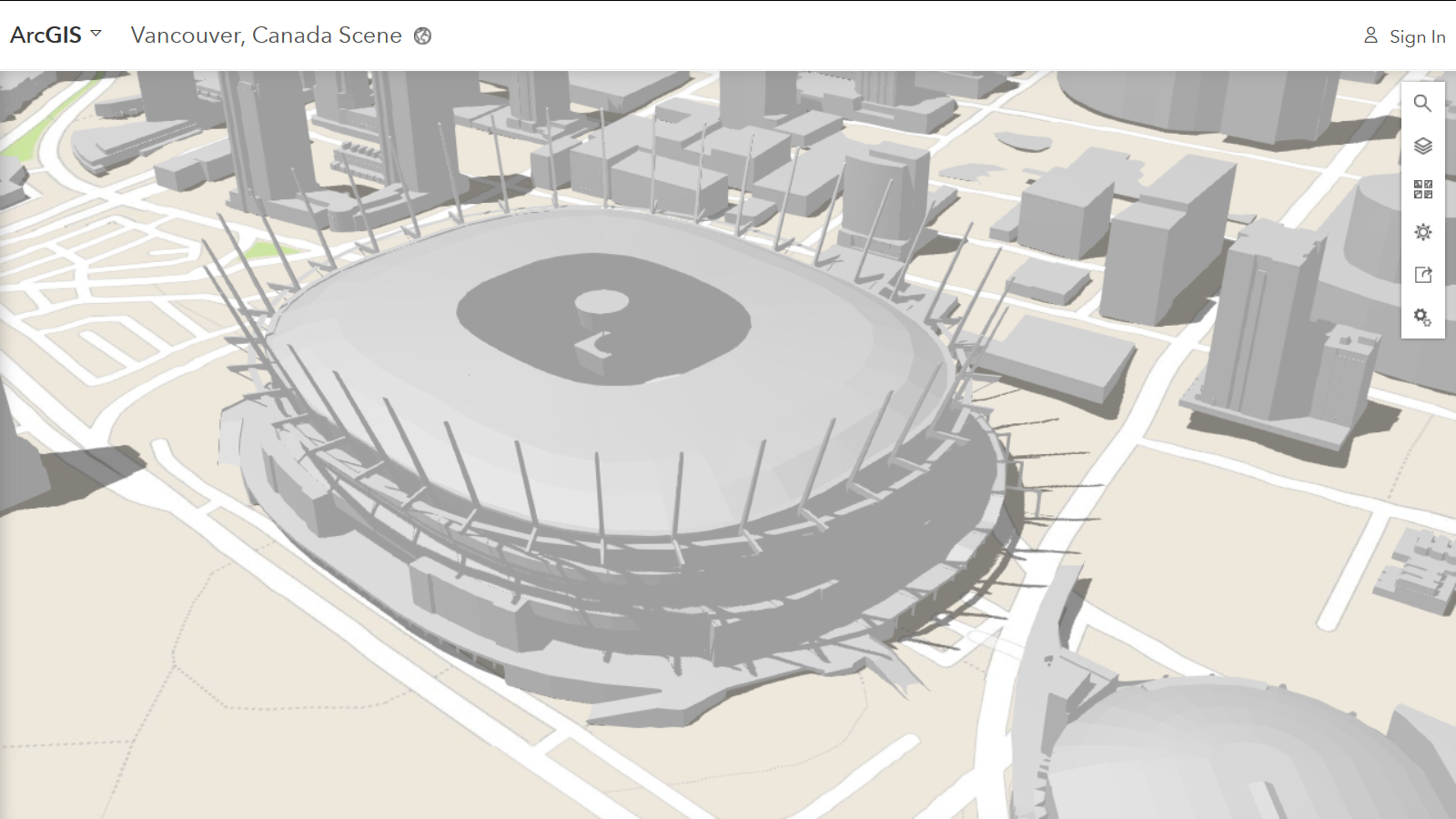 Explore BC Place Stadium in 3D via this 3D scene view of the City of Vancouver.

So, what about your GIS data? Is it ready for 3D? 3D Web GIS data requires an extra dimension—a z-value—in its definition (x,y,z). The z-values are most often real-world elevation values, such as the height above sea-level or geological depth, but there is no rule that enforces this methodology.

There are two basic types of 3D GIS data: feature data and surface data. 3D feature data represents discrete objects like buildings, telephone poles, bridges and street furniture. The 3D information for each object is stored in the geometry record of the feature. Surface data, on the other hand, represents height values over an area. Surface data is sometimes referred to as 2.5D data because it supports only a single z-value for each x,y location, while feature data allows many z-values for each x,y location.

3D GIS data can be more difficult to create and maintain than 2D data. Some GIS features, such as buildings or bridges, naturally lend themselves to being easily modelled in 3D. For example, you may wish to consider having your road or railway network modelled in 3D for investigating slopes and grades.