According to the World Health Organization, there are 1.25 million road traffic fatalities around the world every year. North America certainly isn’t immune. Taking road safety seriously, the City of Toronto addresses it head on with its Vision Zero Road Safety Plan.

According to the World Health Organization, there are 1.25 million road traffic fatalities around the world every year[i]. To put that into perspective, imagine if seven Boeing 747s crashed every single day – would you ever get on board one of them? Yet, it’s interesting that most of us don’t think twice about getting into our vehicles.

Some of us believe that those numbers don’t reflect on North America and that most of the world’s traffic fatalities come from developing nations. While this is true, North America certainly is not immune.

Last week, the City of Toronto reported 77 traffic fatalities in 2016, including 43 pedestrians – up from 38 in 2015. The City has gotten in front of this issue and is addressing it head on with its Vision Zero Road Safety Plan, which includes an extensive list of road safety measures.

To make it easier for the public to understand the City’s plan, Toronto has created a mapping tool using ArcGIS technology that shows safety measures in place and future planned work, as well as tips for all road users aimed at making its streets safer. 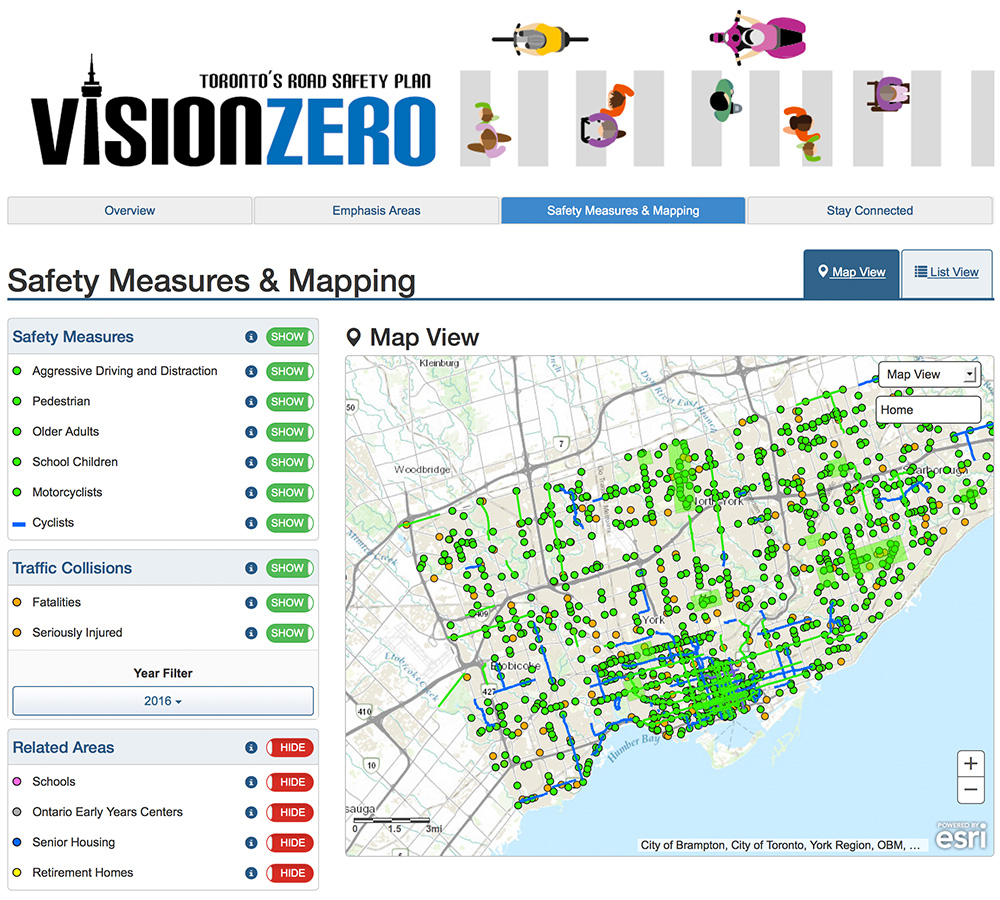 Using Toronto’s new mapping tool, you can view areas in the city where traffic fatalities and injuries have occurred since 2006, and learn more about the 45 new or enhanced road safety measures the City will introduce in 2017.

It’s interesting to note that of the 1.25 million yearly global traffic fatalities, half of those are known as “vulnerable users”, or in other words, motorcyclists, cyclists and pedestrians. It is squarely at this group of road users that Toronto has focused its efforts with its road safety plan.

Solving this epidemic is complex; there are many areas that must be addressed and the specific focus that every jurisdiction chooses will reflect their local challenges.

I’ve personally had the opportunity to work on road safety initiatives in many places around the world, and none come to mind more than the Child Helmet Safety Campaign in Vietnam that started in 2011. If you’ve travelled to Vietnam before 2010, spotting a helmet on a motorcyclist was a rare sighting. Only 22% of children in Ho Chi Minh City wore a helmet. In three short years, that number climbed to 48%[i].

I love visiting Vietnam and these days, it’s common to see riders wearing helmets. Much of that shift is due to a clearer understanding of how helmets save lives and the impact that road fatalities have on communities. This same message is beginning to take hold today in neighbouring Cambodia, where I’ve witnessed the change occurring. The campaign is working.

Canada sports a relatively strong status on a global scale in terms of road safety, coming in at 6 deaths per 100k population (estimated by WHO)[ii]. The global numbers range from Micronesia at 1.9 (deaths/100k) to Libya at 73.4.

I believe that it’s due to this relatively high score, which reflects our collective perception of the relatively rosy situation in our communities, that gives Canadians such poor exposure to the global road traffic fatality epidemic.

WHO reports that Canada has a 95% wearing rate of helmets for motorcycles alongside a perfect 10/10 score on enforcement. We clearly don’t have a motorcycle helmet problem in this country. However, that same report card reveals that 34% of traffic deaths involve alcohol along with a 7/10 score on enforcement, 89% of rear-passenger seatbelt use with an 8/10 enforcement score – and this one surprised me – 77% of children using child restraints with an 8/10 enforcement score.

As a father of two young children, I can’t imagine leaving them unsecured while driving in my vehicle. Yet, nearly one in four of us do just that. We Canadians clearly have much work to do.

By following Toronto’s lead and doing something as simple as publishing locations of road safety measures and traffic collisions, municipalities across Canada can educate citizens and create an environment of awareness. They can declare that not a single traffic fatality is acceptable, and that there are measures in place to help make that a reality.