The Terry Fox Run is held around the world every year, in memory of Canadian cancer activist Terry Fox, to raise money for cancer research. Find out how the team at Terry Fox Foundation uses GIS to effectively track and share data on numerous run sites and funds raised in an easy-to-understand format.

The Terry Fox Run is an annual non-competitive charity event held in numerous regions around the world in commemoration of Canadian cancer activist Terry Fox and to raise money for cancer research.

The event is held every year on the second Sunday following Labour Day. The run is informal, which means that the distance often varies, usually between 5 and 15 kilometres. Participation is considered to be more important than completing the set distance. There are also runs set up by schools of every level, often with shorter distances than the "official" ones.

The Terry Fox Foundation was founded with a dual mandate to maintain Terry’s vision and principles while raising funds for cancer research. The Foundation relies on a volunteer corps 20,000 strong to lead the charge on the ground, organizing more than 9,000 Terry Fox fundraising events every year in Canada and around the world. With more than $800 million raised and 1,300 innovative research projects funded, it is clear that people of all nationalities, ages, backgrounds and abilities are determined to take Terry’s Marathon of Hope across the finish line.

The team at The Terry Fox Foundation wanted to share with their volunteer run organizers the data on the many run sites and the funds raised through different charity events. They looked for an online dashboard that they could quickly configure to identify all the community run sites in Canada, with details on the number of fundraisers and total fundraising amount. The dashboard should display the data in an easy-to-understand format, and it also needed to be updated daily. Once that was completed, the team wanted to do the same for international runs and school runs.

Data tracking and information sharing made easy with ArcGIS Dashboards

“Considering the need to convey the breadth of data visually, one of the run organizers introduced us to ArcGIS Dashboards,” mentioned Ara Sahakian, Interim Executive Director, The Terry Fox Foundation. “We started with creating the first three dashboards and developed a method of procedure  to keep them updated daily.  Looking at how easy it was to put together these dashboards, we moved on to creating dashboards for the school runs as well.” 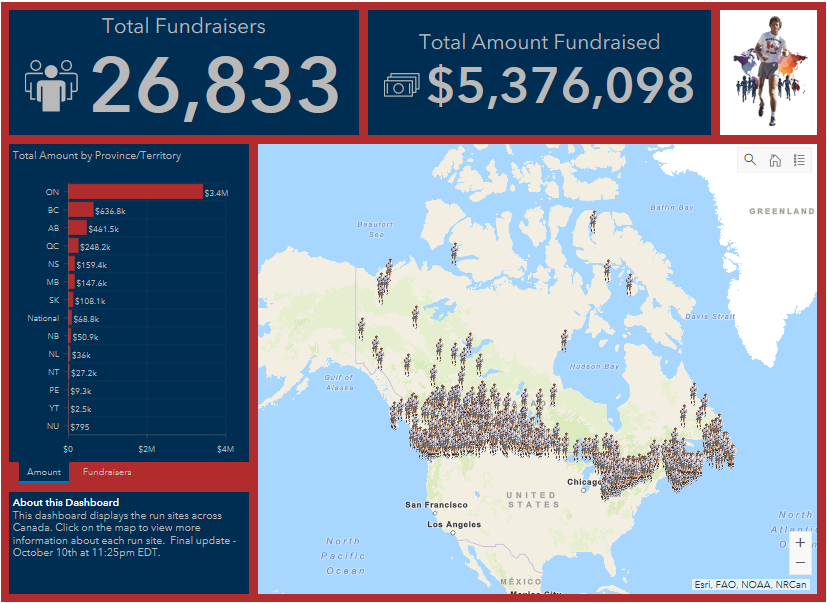 ArcGIS Dashboards enables users to convey information by presenting various location-based analytics using intuitive and interactive data visualizations on a single screen. Every organization using the ArcGIS platform can take advantage of ArcGIS Dashboards to visualize trends, monitor status in real time and inform their communities. You can tailor dashboards to your audiences, giving them the ability to slice the data to get the answers they need. Dashboards are essential information products, like maps and apps, and help users make effective decisions.

Using ArcGIS Dashboards has allowed the team at The Terry Fox Foundation to present relevant fundraising information on a single screen, facilitating understanding quickly and easily.

They created several dashboards, including Find a Run Site for community runs in Canada, Find an International Run and a Map of School Runs/Events.

“Overall, the dashboards have been well received by run organizers and employees at the Foundation. They have been helpful in keeping organizers in the loop on their results and serve as a great motivational tool to keep going,” concludes Ara.

As for the public, having easy access to information on where and how to join Terry Fox Runs and quickly seeing the progress of fundraising efforts make it more engaging to get involved.