What’s the giant flaw in Canadian maps you never noticed? When is the real-time Smart City likely to become a reality? Which apps and tools are essential for GIS professionals? Find out these and more in the November/December SDI Snapshot.

Here’s a look at what’s happening in Canada and globally in the world of spatial data infrastructures (SDI). This month’s post is a collection of the latest and most significant SDI news, data and products.

The Royal Canadian Geographical Society (RCGS) has announced a new facility in Ottawa near Parliament Hill. The National Capital Commission property will become the new RCGS headquarters and a campus for geographic education and exploration of Canada and the world. TV celebrity Alex Trebek, Jeopardy! host and Honorary President of the RCGS, was on hand for the announcement.

Emeritus Professor Ian Masser received the Global Spatial Data Infrastructure (GSDI) Global Citizen Award during the 15th GSDI World Conference in Taipei, Taiwan on December 2. Masser’s acceptance speech, entitled ‘Looking back on SDI developments with an eye to the future,’ drew upon his own experiences over the last 30 years and reconsidered the Brave New GIS Worlds scenarios with particular reference to the diffusion of SDIs, the impacts of technological innovation and the impacts of the GIS industry on society as a whole.

The Field Crops Remote Sensing Team from Agriculture and Agri-Food Canada and Statistics Canada won an Award of Excellence in the Employee Innovation category for their innovative approach to measuring crop production by using satellite, meteorological and historical survey data. Working together over several years, the team used this combined data to create new estimates of national and provincial crop yields.

Giant flaw in Canadian maps you never noticed: Mapmakers keep pretending we own the North Pole

According to a National Post article, for nearly 100 years, the government of Canada has been printing official maps incorrectly pretending that it owns a U.K.-sized chunk of international waters. The mistake, seen on almost every official map issued by Canadian federal agencies, claims that the Canadian border extends all the way to the North Pole. 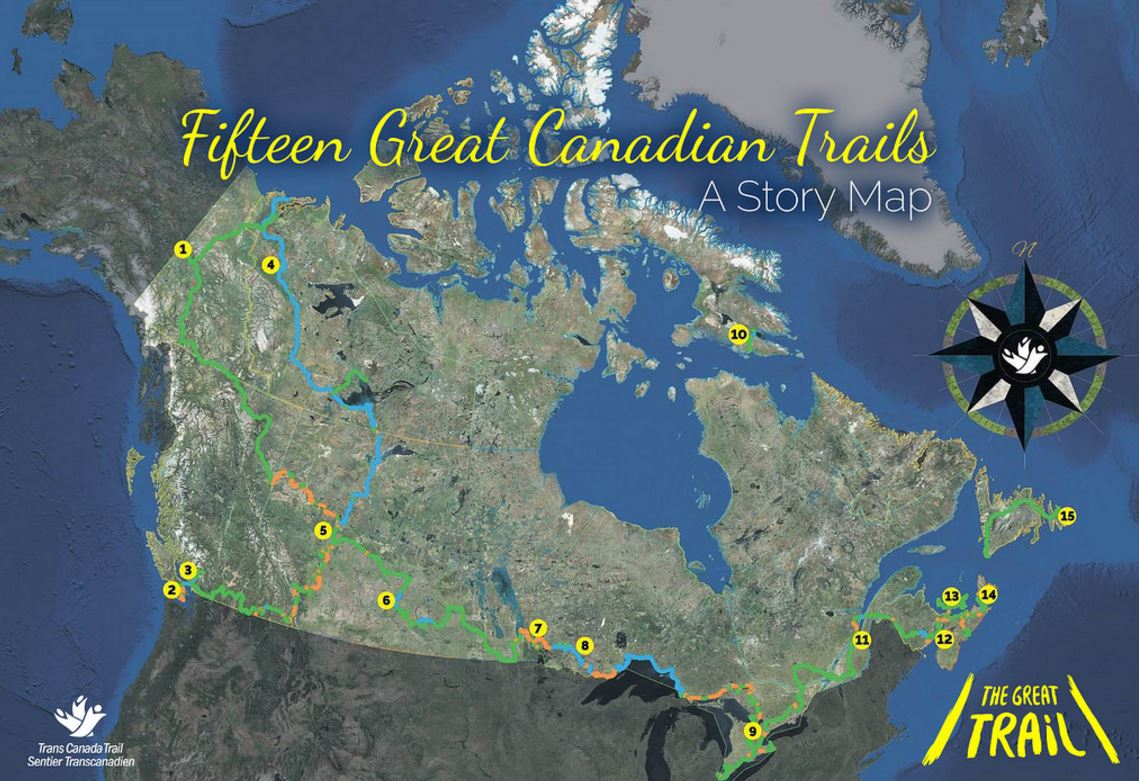 The Trans Canada Trail is the longest network of recreational trails in the world, and it is nothing short of a natural treasure hunt. Linking the Atlantic, Pacific and Arctic Oceans, the Trail crosses the Canadian Shield, passing through the Great Lakes, following majestic rivers and winding through grasslands, wetlands, early settlements, forested areas and boreal forest. Check out this story map of 15 of Canada's most popular Trails, one from each province or territory.

Monica Wachowicz from the University of New Brunswick indicates that over the next decade, the real-time smart city is likely to become a reality in many of the world’s cities. Coordination, communication, coupling and integration are all different methods involved in developing the smart city space of tomorrow. This will require new types of databases, new methods of mining and pattern analysis and new software developments.

How agency data was turned into 3D maps of the oceans

A new big data effort led by the U.S. Geological Survey (USGS) and Esri has created 3D ocean maps that fuse global geospatial and climatology data with information from 52 million ocean points taken over the last five decades. Esri, in partnership with USGS, NOAA, NASA, the U.S. Fish and Wildlife Service and others, released new datasets called ecological marine units, or EMUs, which allow scientists and others to study the oceans in a more nuanced, granular way than previously possible. In addition, they can do so in three dimensions.

ArcGIS Marketplace has plenty of maps and apps that can be used with ArcGIS Online. This feature article describes some of the more important ones for GIS professionals, including backup, admin tools, content filtering and social media tools.

A few months ago, Maptiks announced their web map analytics for Esri’s ArcGIS Online. It made it possible for ArcGIS Online users to track visitor activities, helping to answer key questions like “how and where are users interacting with a web map?” and “what demographic of users are visiting my web map?”