Without GIS technology, I don’t think it would have been possible to analyze the ship tracks and satellite data, and then visualize the cumulative noise on a map.” - Simone Cominelli

The inland marine waters of British Columbia and Washington State, collectively known as the Salish Sea, are home to a wide variety of permanent and migratory species, including cetaceans such as humpback whales, gray whales, killer whales and dolphins. These marine mammals rely on sound to communicate, navigate and feed, making them vulnerable to acoustic interference from marine vessels. Ship-based noise can place stress on the animals and directly compromise their ability to find food, evade predators and reproduce. 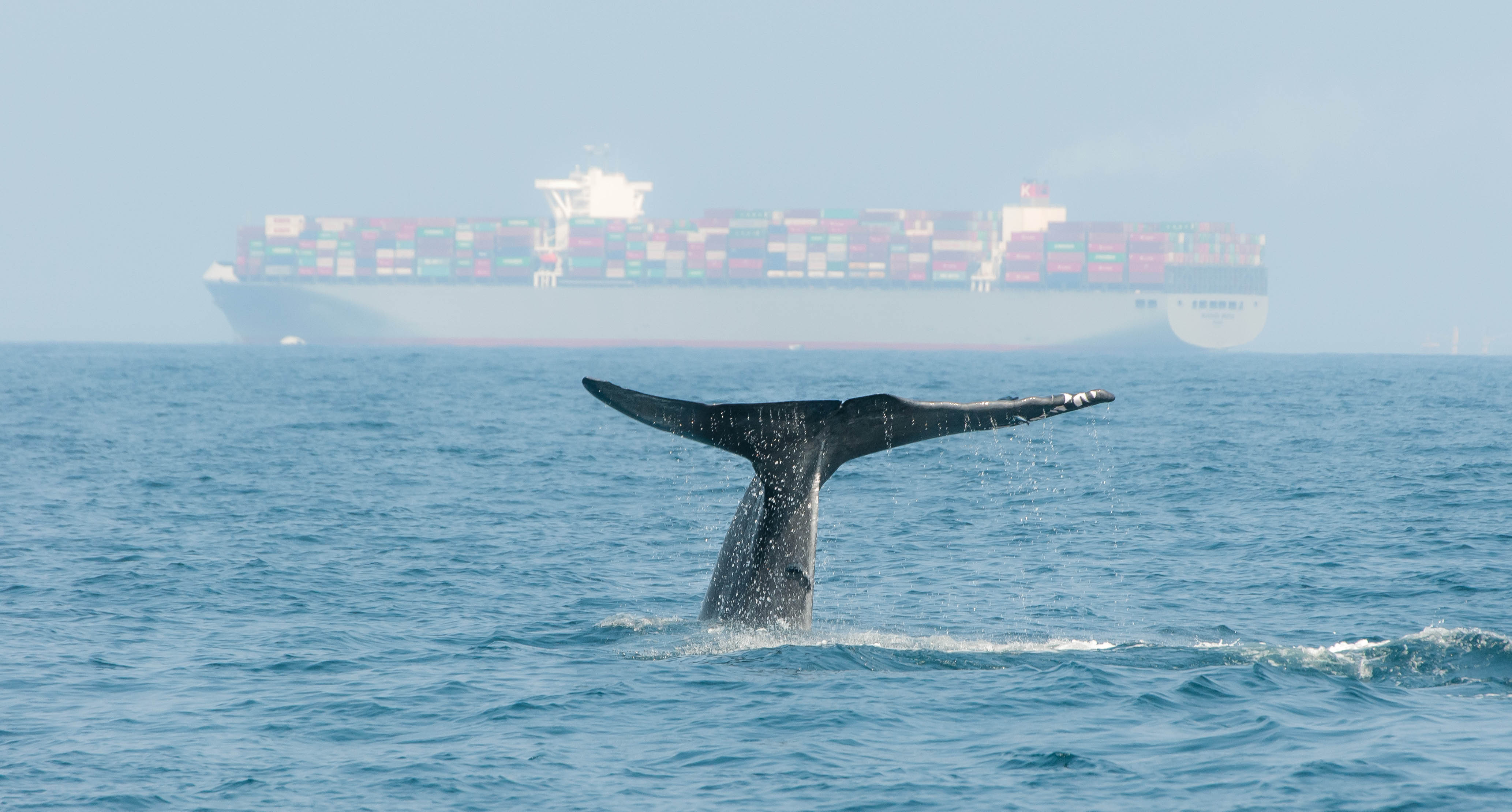 In 2013, roughly 12,000 oceangoing vessels crossed the Salish Sea on their way to and from Vancouver, Seattle, Tacoma and other ports. As Asian trade intensifies, the number of large ships transiting the area will only increase year over year. The Port of Vancouver, already Canada’s largest, is planning a major expansion to accommodate the anticipated growth in trade, with container traffic alone expected to triple by 2030.  Another example of future expansion is the trans-mountain pipeline that is expected to increase oil tankers traffic by 350 ships per year. Add in the ever-present ferries, cruise ships, fishing vessels, naval ships, tugs and pleasure craft, and the potential noise impact on cetaceans in the Salish Sea is significant but difficult to quantify.

Simone Cominelli, a Memorial University graduate student working under Geography Professor Rodolphe Devillers, has been studying the distribution of ship-based noise in the Salish Sea and how it overlaps with the critical habitat of Southern Resident killer whales. His goal is to develop a tool to assess the risk and for plotting alternate shipping routes that could minimize the amount of harmful noise to which these endangered animals are exposed.

“There is a growing amount of scientific research into the impact of human-produced sounds on wildlife populations around the world,” explained Cominelli. “For a long time, the focus has been on acute exposure to noise—very loud sounds that would actually hurt the animals. Recently, attention has shifted to the chronic effects of noise exposure. That’s why we’re looking at ship traffic in the Salish Sea.”

The Southern Resident killer whale population in the Salish Sea is made up of three groups, or pods, that move around independently of each other. In order to assess the pods’ noise exposure, Cominelli first had to define the boundaries of their respective habitats.

Using sightings collected by the Whale Museum’s SoundWatch program between 2011 and 2014, he produced kernel density estimates with barriers for each of the three pods, plus one for the entire population because some areas are shared by all of the animals. Kernel density estimates is a well-established approach for assessing animal’s habitat and has been used in the past to derive home ranges for several terrestrial and aquatic species from a variety of data sources: radio-tracked animals, indirect signs of presence, photo-identification records and visual surveys. As a student in Memorial’s Geography Department, Cominelli had access to Esri’s ArcMap application so he used it to plot kernel density maps of the killer whales’ home range.

Cominelli’s work is part of a larger research project called NEMES, short for Noise Exposure to the Marine Environment from Ships. The NEMES Project is being undertaken by a team of researchers at four universities, with assistance from a group of public and private partners that includes Esri Canada’s Education and Research Group.

From his NEMES partners, Cominelli received a large dataset describing cumulative noise profiles of 22 classes of marine vessels, such as container ships, tankers, freighters, ferries and tugs. He was also given satellite data describing Automated Identification System (AIS) tracks of vessels in his study area. These are the routes of actual vessels that have transited the Salish Sea.

Using ArcMap, he was able to generate heat maps showing how the noise produced by individual classes of vessel, as well as by all the vessels taken together overlaps with the Southern Resident Killer Whale summer core areas. These maps revealed the areas within the killer whales’ habitat where noise levels were highest.

“Without GIS technology, I don’t think it would have been possible to analyze the ship tracks and satellite data, and then visualize the cumulative noise on a map,” remarked Cominelli. 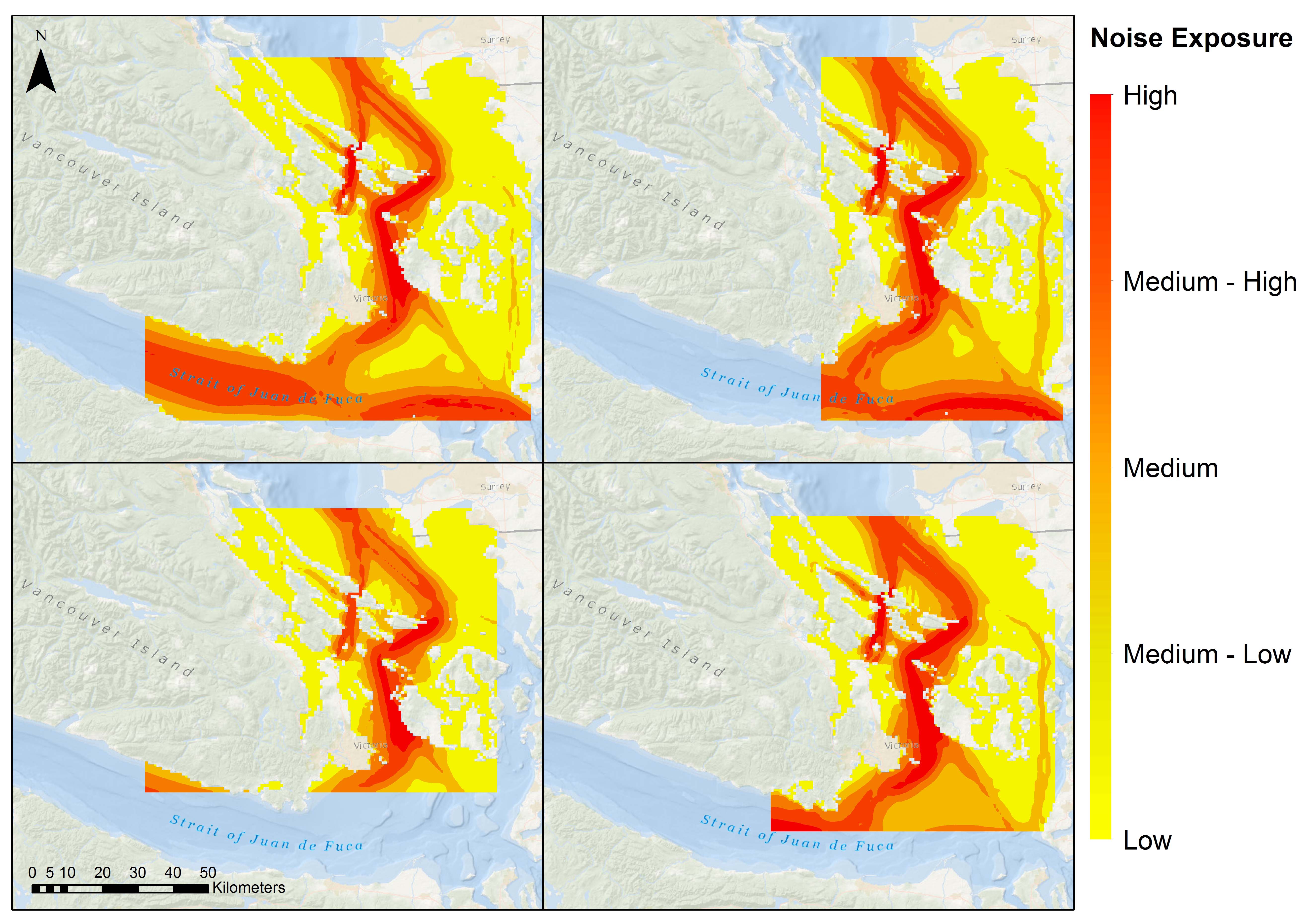 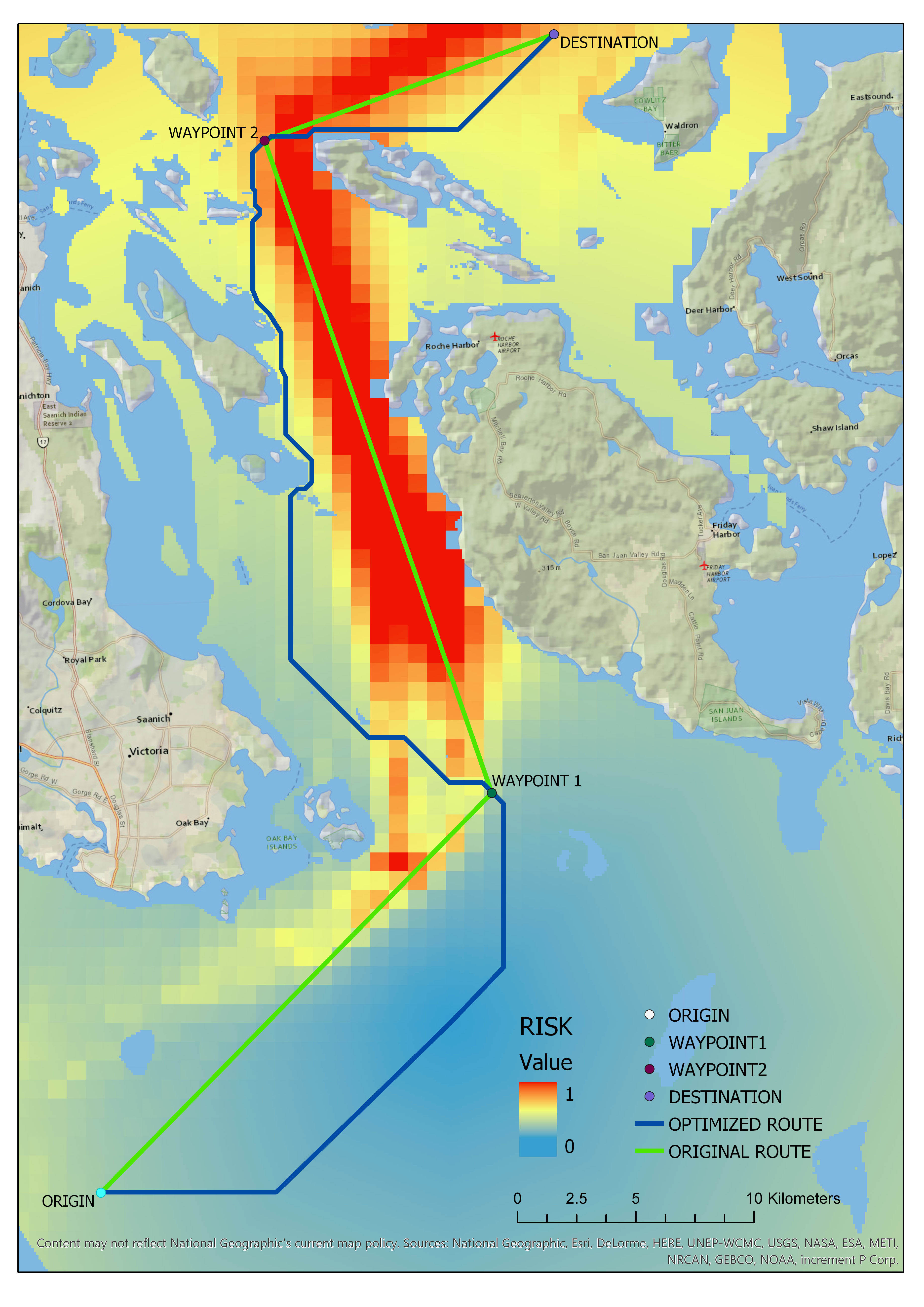 This map shows a route with two waypoints between the origin and the destination, and the "optimal" path identified by the least-cost path analysis tool in ArcGIS Pro.

To enable others to conduct their own noise exposure analyses and visualize the results in ArcGIS, Cominelli developed several software tools using the Python scripting language.

“The Risk Map Generator will automatically do for you what I did manually in the first part of my research,” said Cominelli. “You select a species, a distribution map for that species—for example, one of the four kernels I produced for the killer whales—and either a single vessel class, a group of classes or all of the vessel classes together. This tool combines all of the information to generate a noise exposure map.”

With an eye toward calculating alternate ship routes, he developed another tool for editing the exposure maps. He thought this might be useful for users with knowledge of navigation safety rules and local marine hazards, who, prior to calculating an alternate route, could use the tool to cut out portions of the exposure map that would be unsafe for shipping.

As for calculating alternate ship routes, Cominelli didn’t need to create a new tool to do that. He simply turned to the existing least-cost path analysis tool in ArcGIS Pro, Esri’s next-generation 64-bit desktop GIS software, to get the job done.

“The user inputs the start point, the end point and a series of waypoints along the intended route,” he explained. “ArcGIS then performs a least-cost analysis on each segment and overlays the intended route with an optimized route. The user also receives a report comparing noise exposure along the two routes.”

Cominelli went on to develop a third Python tool for assessing the additional cost of rerouting a vessel through a lower-impact zone. This tool can be used to compare variables such as distance travelled and fuel costs for the two routes.

With help from Esri Canada (and ArcGIS API for Python), Cominelli has set up his analysis tools so they are accessible from a toolbar in ArcGIS Pro.

In addition to generating maps and developing analysis tools, Cominelli has also been investigating how to produce a 3D visualization of a ship’s noise plume within the Salish Sea, complete with all of the local topographical features.

“Esri Canada is helping me figure out how best to represent and visualize this kind of data,” he said. “We explored the possibility of using [popular gaming engine] Unity as a 3D environment for the geovisualization but decided to go with ArcGIS Pro because it allows us to combine 3D visualization with analysis capabilities.”

Esri Canada has already modelled the underwater terrain and surrounding mountains using ArcMap and CityEngine. Cominelli expects to finish the 3D geovisualization in time to present it at the Esri User Conference in San Diego in July.

Cominelli is still hard at work refining the analysis tools he has developed with Python and ArcGIS Pro. In particular, he is looking at how to enhance the noise exposure comparison report in the (least-cost) shipping route calculator before his project winds down this summer.

Although Cominelli is scheduled to complete his thesis in August, the NEMES Project will continue for at least three more years, giving other team members an opportunity to build on his research, perhaps by applying his GIS tools to whale habitats on the East Coast.

“There’s work already being done to test alternative solutions for decreasing the level of noise,” he said. “Our approach suggests displacing traffic away from the animals. Another option might be to enforce speed limits. The ideal solution—the long-term solution—is to reduce the level of sound at the source by having companies upgrade their fleets with noise-reduction technology.”

Cominelli hopes that the results from his GIS-intensive project will ultimately help put these solutions “on the map” for decision-makers and stakeholders in the shipping industry.