Kearl Oil Sands is located 70 kilometres north of Fort McMurray in Alberta, Canada. Operated by Imperial Oil, the mine is one of Canada's largest open-pit mining operations, with an estimated 4.6 billion barrels of bitumen resource. Like all mining sites, the safety and operations management for Kearl’s tailing ponds is an important area of Imperial’s mining operations as dam failure can lead to high environmental and economic losses. Tailing ponds are large dam structures designed and built to hold water, clay, sand, and residual spent materials from bitumen extraction. Field engineers monitor the integrity of their tailings infrastructure to ensure that they are performing within design specifications. 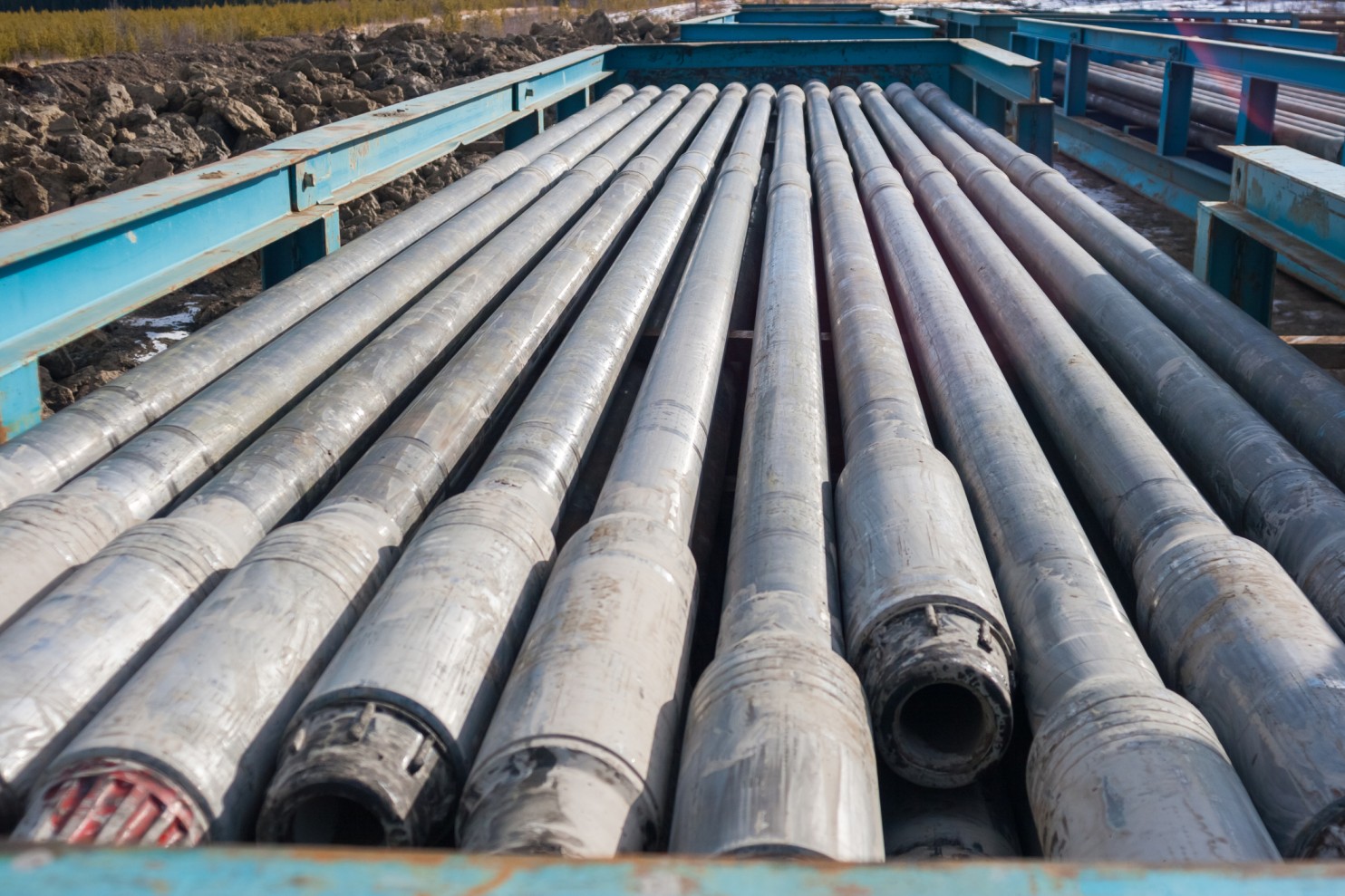 Up to 2019, Kearl contractors were recording and reporting their field assessments using paper. This system was being used at a cost—this analogue method was not only inefficient but relatively unusable for Kearl’s long-term infrastructure analysis and monitoring because tailing structures are meant to perform for up to roughly 15 years.

Linh Duong, Geoscience Technologist, Imperial Oil explained: “In the beginning, static paper maps were in use as a point of reference in the field. Location information was collected with GPS devices. Our contractors would record on paper and then digitally transcribe the findings for our engineers when they got back to their desk.” Additional problems the Imperial Oil engineers encountered in their infrastructure monitoring were the lack of data search and filter capabilities, lack of data interactivity and display, and a cumbersome record-keeping process (fig.1). “There's high susceptibility to data loss and too much reliance on memory for retrieving specific information. We knew we needed to do better,” said Linh. 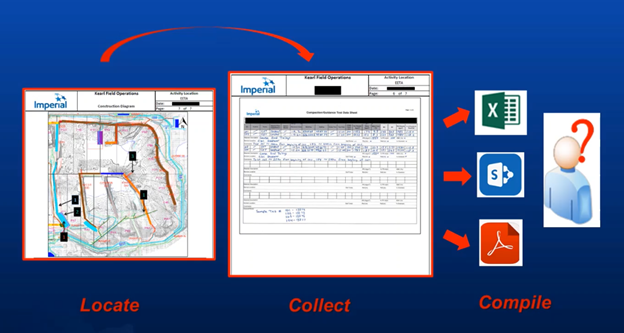 Linh’s previous experience with GIS proved invaluable to the newly formed 6-person geomatics team at Imperial. With the knowledge that web GIS can assist in transforming field operations and improving Kearl’s existing process for dam inspection, Linh and her team set out for discovery sessions. They interviewed Kearl’s field engineers to come up with a way to make surveillance duties easier and more efficient. A list of must-have features was drawn. The following items were recorded during their interviews:

Fortunately, Linh and her team were able to connect the team’s success criteria with ArcGIS solutions. They tested several ArcGIS apps for usability and ease of workflow integration. The team then configured the field operations apps into smart forms for mobile devices to replace their manual data collection processes. The period from data collection, testing and go-live took only two months!

To support Imperial Oil’s data collection efforts, Linh’s team configured Survey123 to produce a series of smart forms that consolidated pages of questions from the original paper forms. The questions were intuitive and were asked in a flow that facilitated efficient data collection, including expanding or contracting options that depended on preceding answers.

“We believe the overall user experience benefitted from the special consideration to the sequencing of questions. In our case, we wanted to make sure that it was logical and the questions flow from one to the next,” Linh said. “Being a first-time user of Survey123 at that time, I found it easier and faster to build forms using the drag-and-drop interface in the web designer and then use Survey123 Connect on the desktop to further customize it by taking advantage of the repeats and the calculation features through XLSForm.”

Another great feature of Survey123 Connect is the capability to incorporate custom JavaScript to implement features not available out-of-the-box, such as querying an external web service for current weather information, which Imperial Oil did. 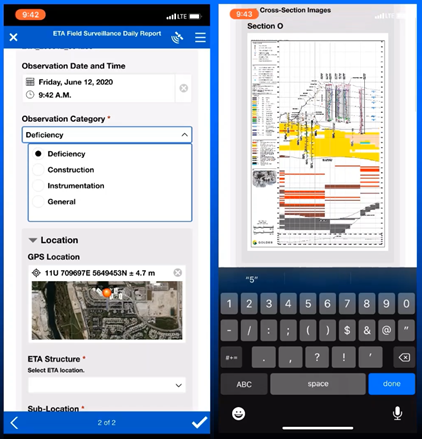 To create a more compact report and communicate data in context, Kearl engineers used Observation sub-forms under the higher Surveillance forms. These were linked based on reporting date and allowed multiple observations as well as observation types to be collected, such as Construction, Deficiency, General, Instrumentation.

Reference materials were also embedded into the form for easy retrieval. Being able to automatically pull relevant documents as a form is being completed has been useful for engineers in cross-checking data and aided understanding in the field. Additionally, the function to capture photos and notes from the mobile device and attach to the form was included. To add to the richness of the data, all photos are watermarked with a company logo and tagged with a unique ID and latitude-longitude coordinates.

Bringing it all together

So, where does all this information go and how is it used? Kearl engineers typically work on-site through a 10-day shift. There is a period overlap between new and retiring shifts; this is when surveillance responsibilities are transferred. During this period, the engineers exchange information by going over their dashboards. “The smart forms we built with Survey123 automatically streamlined the generation of reports,” Linh said. “These reports get visualized by ArcGIS Dashboards.”

These dashboards provide users with an interactive summary of all activities recorded around the tailings area. A total of three were created by Linh’s team, each fulfilling a different purpose.

In summary, Kearl uses dashboards to give engineers on-demand access to collect and review data and monitor current and past field inspections in an interactive web browser application. To further simplify access to inspection reports and summaries of the tailing ponds, Kearl’s three dashboards were embedded into one story map. This is a valuable resource for engineers and managers to quickly gain location awareness for their assets and inspections.

When a deficiency is recorded during their inspections, it is passed to a repair group. The process is continually monitored and updated on the dashboard. Once repair work is completed, Kearl engineers then perform another assessment and complete a status update on the deficiency using ArcGIS Collector (Field Maps). The application is map-centric to help assessment teams orient themselves to locating the assets across the mining site. Photos taken during the assessment will be added to the same deficiency record, thereby updating the dashboards.

Building on the foundation

Upon assessing some of the benefits from moving to an in-house inspection solution, Imperial discovered the GIS-based tools gave back the engineers 15% more time as the need to transpose data from paper was eliminated. Further, the speed at which data could be retrieved was instantaneous, where in the past it would have taken one or two days to find.

Imperial Oil’s use of GIS has enabled inspection engineers to become more productive at their jobs. It has provided the mining team with situational awareness to enable quicker and better decision-making. Their digital transformation has allowed the teams to connect more effectively around real-time spatial data and generated added business value that will create a safer mining operation. Transformation was equally experienced within Geomatics; Linh and team are now building on their foundation and helping other business units in digitizing their operations around GIS.