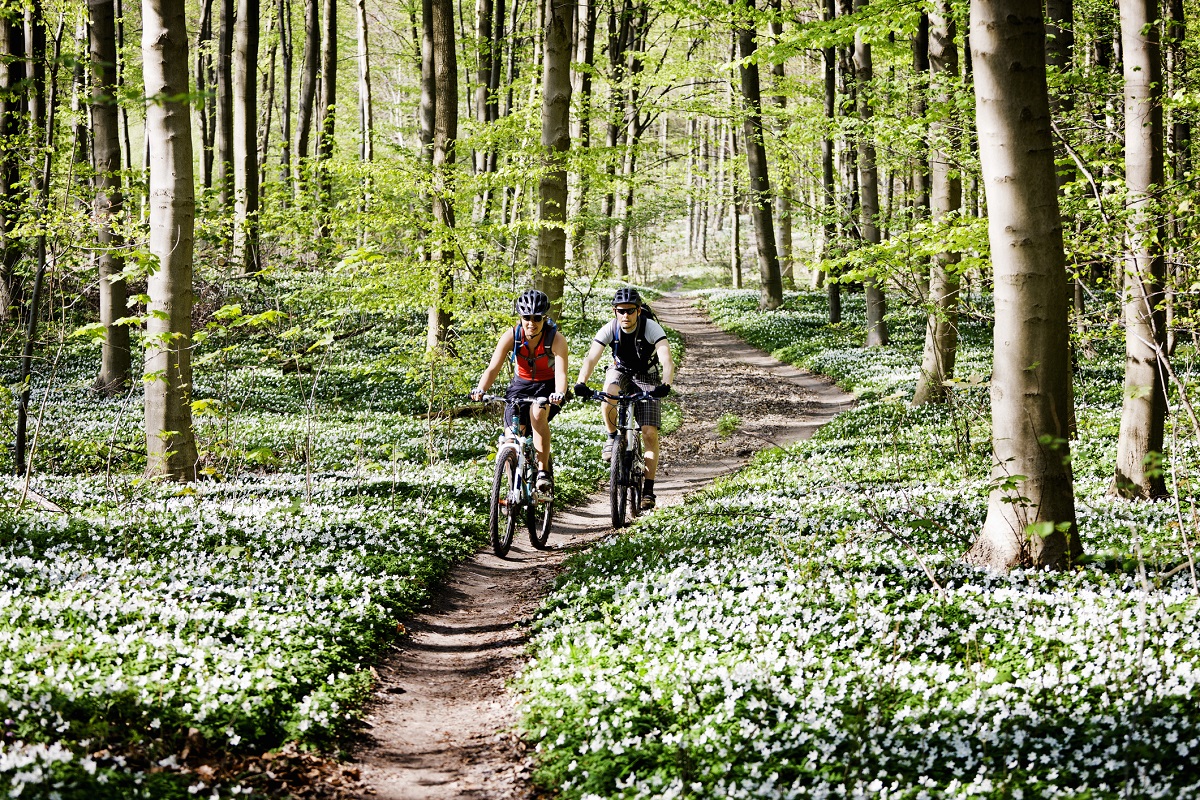 Biking has emerged as a leisure activity that is growing in popularity each year across North America. With its geographic diversity, natural beauty, and spectacular views, Québec, Canada's largest province by area, offers a massive trail network with world-class biking trails.

Vélo Québec, a nonprofit organization based in Québec, Canada, aims to help the environment and improve the health and well-being of its residents by encouraging the use of bicycles. By offering cyclists training and hosting cycling events and travel opportunities, the group promotes bicycling for recreational purposes, tourism, and an eco-friendly mode of transportation.

Mountain biking was added to Vélo Québec's agenda in 2012 with a focus on advocacy and properly developing biking trails.

Precise and up-to-date data is essential to support the development, promotion, management, and use of trails. Francis Tétrault, mountain biking project manager for Vélo Québec, explains that in many instances, trails in Québec are built on private land. Accurate trail mapping is helpful to acquire permission from landowners to build trails on their land.

Helping in the perpetuation of trail networks is a personal mission for Tétrault, who says he has seen trail networks disappear due to poor planning and maintenance and loss of landowner permission. "This project is very dear to me. We currently have over 500 kilometers [of trails] mapped this season in the first installment of our project, but my ideal target is to have every kilometer of trail in Québec mapped, and every new official trail added to the database. And then we can have this for generations to come," says Tétrault.

Field data capture must be made extremely easy, reducing training to a minimum so a network of nonexperts can be leveraged to create and maintain up-to-date data. Otherwise, it is not possible to perform trail mapping at scale. Remote field conditions can also add another layer of challenges, such as working in remote areas without cell coverage and using technology under varying light and temperature conditions. In addition, data is captured by staff and volunteers (in most occurrences) while they're riding a bicycle, so the need for lightweight, compact, durable equipment is critical.

Data collection must also produce accurate data. Before this initiative, trail data was largely gathered on paper and georeferenced using smartphones, which is not very accurate.

"Because of that low level of precision, you could see lines actually crossing and being superimposed (when collecting trail data), especially when tight hairpin turns were concerned, which is a regular occurrence in modern bike trails," Tétrault explains. "There are a lot of variables that make the traces less precise."

Its simple big-button user experience required minimum training and enabled effective data capture of multiple observations and traces while riding the bicycle. ArcGIS QuickCapture runs on consumer iOS and Android devices, so anyone with either platform can load it on their phone. 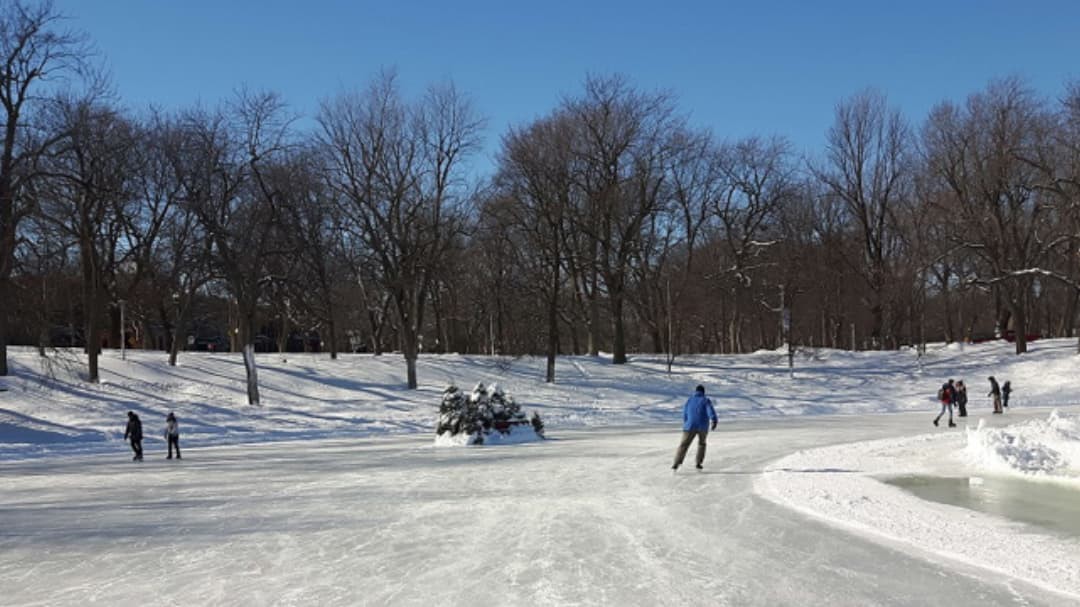 Due to severe snow conditions in Canada, the first field tests were not possible on a bicycle. Instead, QuickCapture and the Arrow 100 were put to the test while ice skating on a lake near the Vélo Québec office. The results were remarkable: easy to use, easy to carry, and great accuracy. ArcGIS QuickCapture and the Arrow 100 were able to perfectly map and attribute the tracks on ice.

The next step was clear: prepare for using ArcGIS QuickCapture and the Arrow 100 from mountain bikes in spring. A smartphone with ArcGIS QuickCapture was attached to the bicycle's handlebar, and the Arrow 100 receiver's antenna was mounted on the rider's helmet, while the receiver was in a hydration pack worn by the technician. The Arrow 100 unit was configured to stream locations to ArcGIS QuickCapture at 2 Hz (2 positions sent per second) to improve the granularity of the tracks captured. It was also configured to enable field observations along the trail: photos, obstacles, bridges, intersections and the difficulty and category of trails mapped, as well as polygons for trailhead parking lots and buildings. 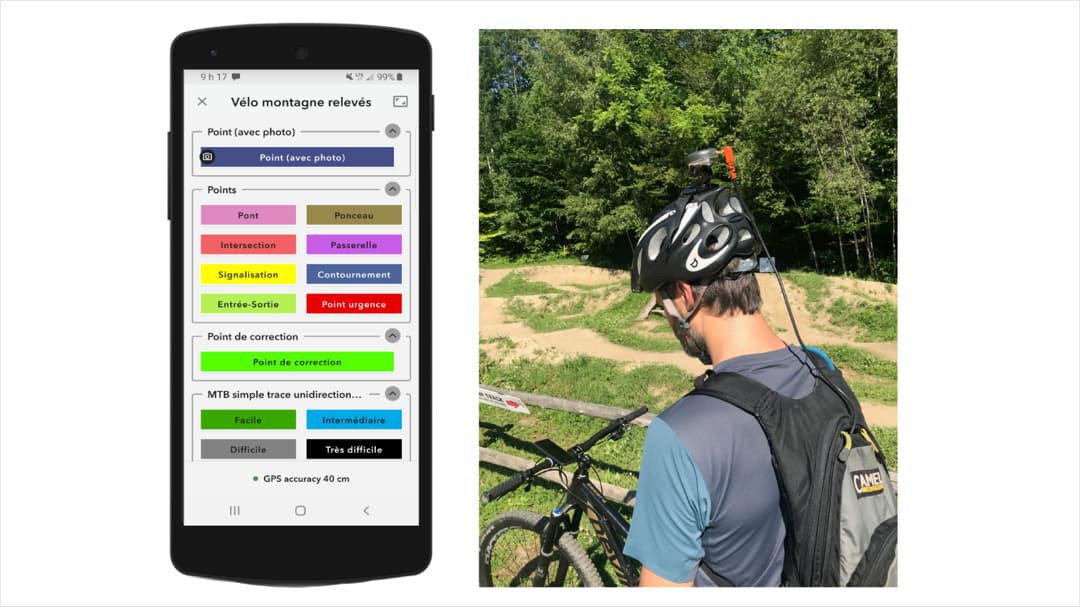 The rapid data collection of ArcGIS QuickCapture has made gathering and processing trail data a much more streamlined, digital process. The old method involved a handheld GPS to generate waypoints or polylines. Then, data was transcribed in a notebook and later entered into a spreadsheet to populate the attributes related to each point, such as the width of the trail or difficulty level. This old method was cumbersome and opened the door to data entry mistakes that would be hard to track afterward.

Now, all the features the team records on the trails are reflected in individual buttons with ArcGIS QuickCapture. "We pick the right trail attributes, punch the appropriate button in QuickCapture, and the track gets recorded as we follow the trail. And it's the same thing for observations along the trail: punch a button and QuickCapture records the observation and its location while the trail is being recorded, as a waypoint would with a normal GPS, only we didn't need to punch in text on a [numeric keypad], which can take quite some time and patience to accomplish!" says Tétrault. "It's incredibly simple. I see this procedure as less of a chore for volunteers than the traditional method of GPS and paper, and the training is much more intuitive."

ArcGIS QuickCapture is also speeding up data capture in the field. "In the several months we've been running ArcGIS QuickCapture on the ground, we have covered more kilometers in a shorter amount of time than with our old method," says Tétrault. "In one, 20-week season, we should be able to cover around 600 kilometers with an average of 20 kilometers per day. That's 375 miles for one person, which is a substantial amount."

Data is now accessible in real time, enabling prompt quality assurance and constant monitoring of progress. Technicians can check to see if a trail has been entered correctly while in the field or call in to have it checked immediately by office staff.

With ArcGIS QuickCapture and Arrow 100, the improvement in data quality has been considerable. "For us, this tool guarantees a uniform quality of the data in the project, which was a big challenge before. I had an idea of the possibilities of GIS before, but this project with ArcGIS QuickCapture has opened up a can of 'wow' in terms of putting technology in service for a cause," explains Tétrault. 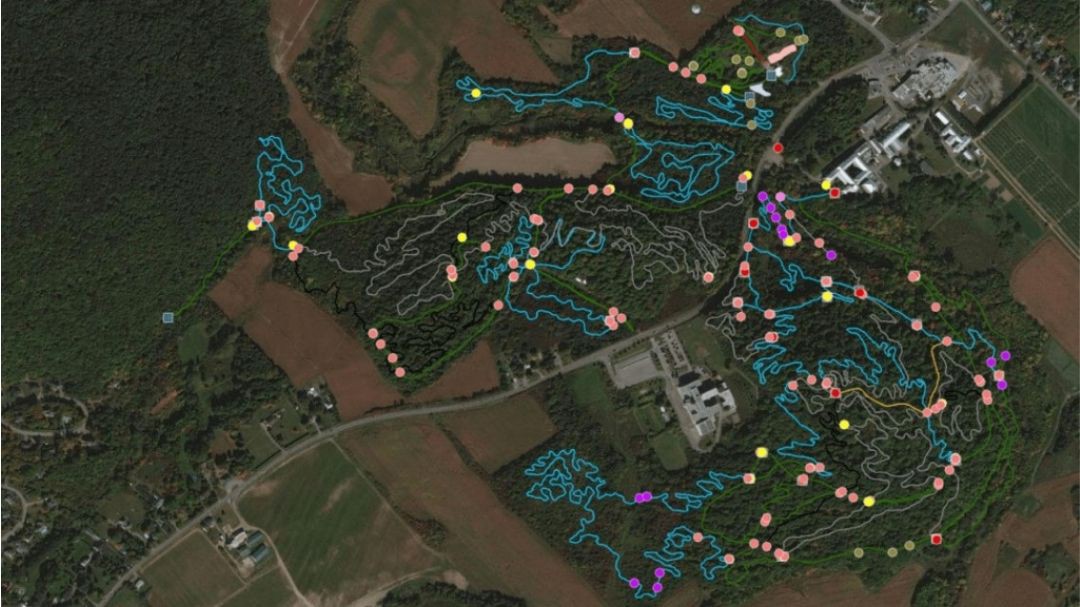 "ArcGIS QuickCapture was a perfect solution for us. It's affordable, easy to use, and I think I can have anybody with minimal training doing quality work on it."
-Francis Tétrault
Mountain Biking Project Manager, Vélo Québec