In the last half decade, Toronto has been growing quickly, and much of this growth is growing upwards. With planning initiatives in place to accelerate the development of much needed new and affordable housing supply, there has been a significant increase in high-rise proposals, with the city on track to have the second largest number of skyscrapers in North America, after New York City. With so much development being planned, comprehensive development proposal assessments are needed to ensure that the proposed projects help achieve healthy, complete communities, and are not focused solely on financial gains. This blog post describes a web-based application to aid in such assessments, following three proposed developments in the Wynford-Concorde area of Toronto's Banbury-Don Mills neighbourhood.

The housing supply and affordability crisis in Toronto is significant. It continues to grow due to the shortage in housing supply and rising rental and ownership costs that increasingly price prospective residents, and especially new entrants, out of the market. In an effort to meet the housing demand for a rapidly expanding population, high-density redevelopment of both public and privately-owned sites has become a common trend in the city. This growth has been fueled by the transit-oriented development that has been common in recent years, often in the form of high-rises popping up along transit corridors with the aim of delivering much needed housing supply while encouraging walkable, well-connected communities.

Similar densification to the trends noted above is slated for North York’s Wynford-Concorde neighbourhood, where Esri Canada’s head office is located. Three future light rail transit (LRT) stations are planned along Eglinton Avenue, which is the southern border of the neighbourhood, and individual design proposals for mixed-use high-rise development projects have been submitted for three sites east of the Don Valley Parkway: 1-3 Concorde Gate and 10-12 Concorde Place, 175 Wynford Drive, and 123 Wynford Drive. They collectively comprise 7,714 additional dwelling units, which could translate to more than 16,000 new residents in the area, and also include hotel and retail space. 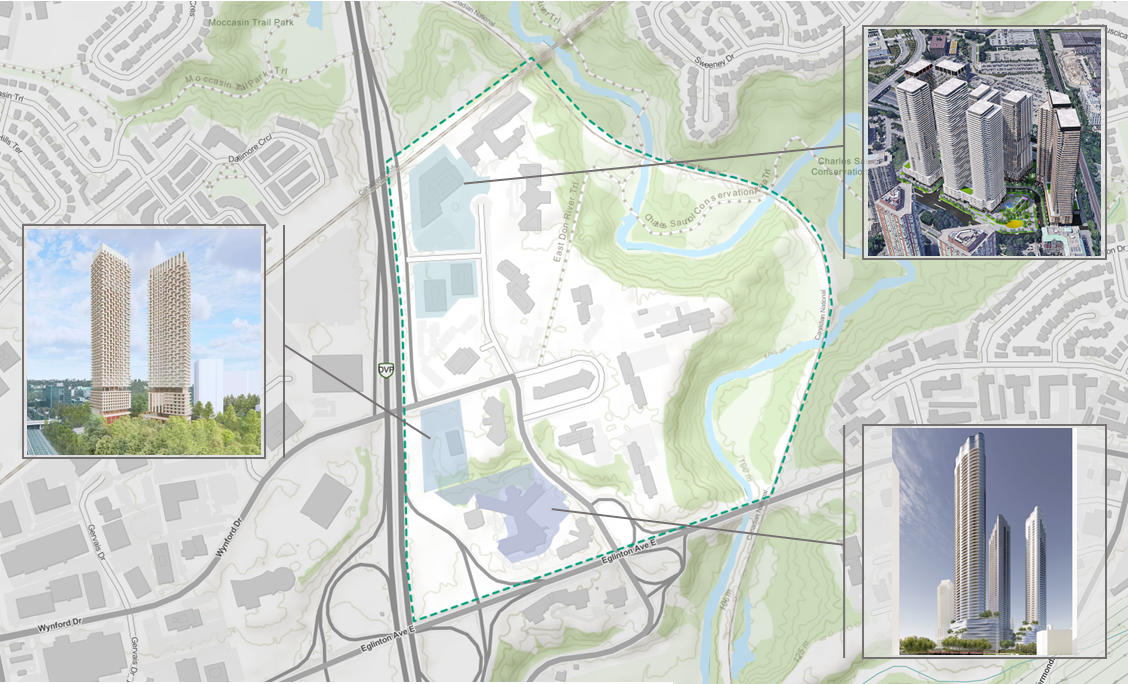 Local residents have voiced concerns over the density of the proposed designs, which have been described as 'monstrous’ and ‘inappropriate’ for the surrounding neighbourhood. At 40 to 65 floors high, the proposed buildings will tower over the area’s existing buildings, which max out at 37 floors. The siting of the buildings is also extremely dense, with nine high-rises planned for one of these project sites alone. Locals have also cited the lack of community resources as an issue, as such a large influx in residents would require the provision of further retail, recreational, and community spaces to support adequately the local neighbourhood. Parking scarcity and future traffic conditions are also a major concern, as the area experiences a moderate level of congestion already.

To help review the proposed development and investigate alternative design options, we created a web-based GIS application for informative urban scenario visualization and exploration. Specifically, the Wynford Drive Development Viewer app was created using  ArcGIS Maps SDK for JavaScript  (formerly called ArcGIS API for JavaScript), ArcGIS Experience Builder, and the open Chart.js JavaScript library. It supports 3D visualizations of urban development in the Wynford-Concorde study area under three scenarios: existing conditions, the proposed development, and an alternative scenario that we configured to re-envision the potential redevelopment with a design that promotes a more balanced mix of spaces at a moderate density.

The app consists of two main tab views: the Compare and Explore tabs. The Compare tab allows you to evaluate and compare two scenarios side-by-side, both visually and quantitatively to assess their performance on a number of key planning indicators. The selected scenarios are visualized in two separate synchronized 3D scenes that support user navigation. Dynamic charts below the viewports update automatically to reflect the values of planning metrics for the selected scenarios, including estimates of population, households, jobs, parking, built area, and peak hour traffic volumes.

The Explore tab allows you to explore individual scenarios and use on-the-fly analysis tools for further visual evaluation. You can navigate freely in the 3D scene, travel to a series of suggested viewpoints through a set of bookmarks, employ controls to change the default lighting and weather settings, and apply built-in shadow and line-of-sight analysis tools to assess the impact of development on existing land uses within the surrounding area. There is also an option to visualize the scenario in an immersive ArcGIS 360 VR environment, which can be viewed in a desktop or mobile browser or through VR equipment.

The existing conditions depict the current state of the study area before any development occurs. Existing development in the three designated project areas primarily consists of a residential hotel and office buildings of low density, while the larger neighbourhood is generally comprised of low-to-moderate density residential and office complexes. A considerable amount of traffic flows in and out of the area each day, with a large percentage of commuters traveling by vehicle. Open government datasets including 3D buildings were used to model existing conditions. We used ArcGIS CityEngine software to model out the local terrain, trees, transportation networks and infrastructure for all three scenarios.

The proposed development scenario represents future conditions if the three development projects were constructed, as well as the new LRT stations that are under development. The proposed mixed-use projects mainly consist of residential suites, with some limited retail and community space. Though the percentage of commuters travelling by automobile is anticipated to decrease by approximately 10% with the introduction of the LRT line, overall traffic volumes will inevitably increase with the high-density development. Buildings were symbolized by space use designation in CityEngine. Building models were generated for the 123 Wynford Drive site, where developer models were not available.

We developed the alternative scenario with three main objectives guiding the design: (1) moderate density, (2) a good balance of space use types and provision of adequate community infrastructure, and (3) a compatible design proposal that integrates well with the surrounding neighbourhood. This resulted in a variety of space use types generated, including retail, child care and other services, and community spaces. Buildings for the alternative scenario were also created and symbolized in CityEngine.

We saved the completed scenarios as web scenes in ArcGIS Online and integrated them into the web app for viewing. Metrics relating to development and traffic were calculated for the three project sites under each scenario using space use types, municipal intersection traffic data, and some generalized assumptions. These metrics were also included in the web app for display with each selected scenario in the Compare tab. A summary of the calculated output metrics for each of the three scenarios is provided below. 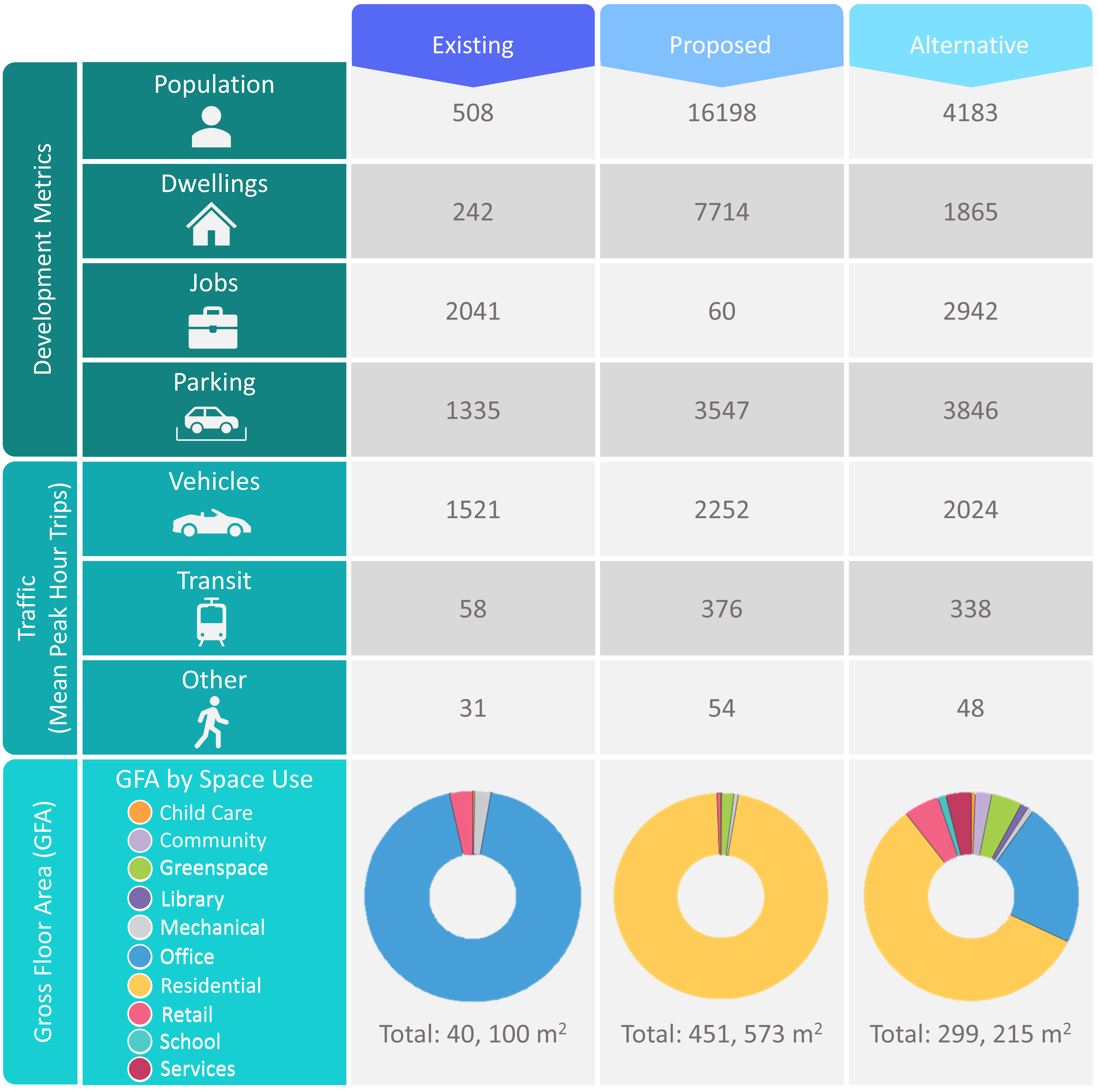 Summary table of the metrics for each scenario.

Comparing scenario metrics, it is clear that the proposed development would significantly increase the built density at these three project sites, with the local population level increasing while jobs decrease due to the large amount of residential relative to non-residential space. This would lead to a substantial increase in daily traffic, especially at peak hours, albeit with an assumed lower overall percentage of trips by private vehicles as opposed to transit and other transportation modes. In comparison, the alternative scenario offers a mid-density development that provides housing while maintaining a balance with other desired amenities, such as retail and community space. Interestingly, the resultant traffic estimates are still quite high for the alternative scenario, though it is important to note that these represent only the peak traffic hours, so a larger discrepancy may exist between overall daily traffic volumes because of the higher proportion of residential development in the proposed development scenario. Furthermore, the traffic metrics are computed for the general study area and are not limited to the three project sites. Regardless, it is likely that the local road infrastructure will need to be enhanced in order to accommodate increased traffic flows resulting from densification of the area.

The alternative scenario we modeled for this assessment is exploratory in nature, and only represents one of the many potential designs that could be pursued in place of the proposed development. However, it demonstrates that an effective compromise can be made between the need for densification to achieve increased housing supply, and the desire for a complete, livable community for local residents. Designs like the alternative scenario allow for a balanced approach that provides jobs, residences, and community spaces.

You can explore the Wynford Drive Development Viewer here.