The below is a guest article by Paul Collins, Utilities Director, Capital Projects Group, Metrolinx. The article reviews how Metrolinx and Infrastructure Ontario leveraged ArcGIS to help facilitate a pilot project that verified new procedures and practices for managing and resolving conflicts with third-party utilities during transit development projects in service of the 2020 Ontario provincial Building Transit Faster Act.

In April of 2019, the province of Ontario announced an historic 28.5-billion-dollar transportation plan for the Greater Golden Horseshoe Region (GTHA), including four priority subway projects within the city of Toronto. In June of the same year, the Getting Ontario Moving Act was enacted, which granted ownership of the new subway projects to the Province. Metrolinx, an agency of the Government of Ontario, is responsible for planning, developing and operating an integrated transportation system for the Greater Toronto and Hamilton Area. Metrolinx is currently working to deliver more than 40 new kilometres of subway lines, over 50 kilometres of new LRT lines, more than 200 kilometres of new GO train tracks and upwards of 100 new stations and stops to help people move throughout the GTA, Hamilton and Niagara Region. Infrastructure Ontario is a Crown Agency of the province that supports initiatives to modernize and maximize the value of public infrastructure and real estate. These two organizations are working together to develop new programs and processes to ensure the effective delivery of complex transit delivery projects that involve coordination across stakeholders such as transit and utilities.

Given the number and complexity of utility assets in the GTHA, there is a need to proactively address issues that could cause delays, such as utility conflicts, to building new transit infrastructure. In this context, the Government of Ontario passed the Building Transit Faster Act (BTFA) in 2020. The Act empowers Metrolinx to access municipal rights-of-way and expedite pre-construction due diligence and utility activation for all of the province’s priority transit projects, including:

The purpose of the Act is to enable faster relocation of utilities assets and ultimately deliver transit projects more quickly with fewer conflicts and delays. In service of these goals, Metrolinx and Infrastructure Ontario partnered with the University of Waterloo and Centre for Advancement of Trenchless Technologies to conduct a qualitative study aimed at exploring the standardized practices for utility coordination in different geographic locations and identifying solutions that could be applied to Ontario’s priority transit projects. This comprehensive review of best practices resulted in a series of recommendations that Metrolinx and Infrastructure Ontario leveraged to develop Utility Conflict Management (UCM) practices that identify and resolve conflicts and the Office of Utility Coordination (OUC) to coordinate with third party utilities to manage and resolve conflicts.

To verify the UCM and OUC, Metrolinx, in collaboration with Infrastructure Ontario, performed a pilot implementation on one of the Subway Program projects, the Ontario Line.
Esri’s ArcGIS system was chosen to facilitate and support the UCM and OUC. ArcGIS plays a critical role in these functions as it uses location to integrate different data types and sources from multiple organizations into a cohesive view that can be shared across stakeholders.

Historically, transit delivery projects inevitably run into challenges such as conflicts that cause significant delays for project delivery, increased costs and inconvenience to residents in affected areas. As discussed below, these challenges typically stem from a lack of accuracy, consistency, and access to data, both within and between organizations.

The limited completeness, timeliness, and consistency of structured data for existing utility assets and proposed infrastructure changes often hinder the ability of stakeholders to identify, manage and resolve conflicts. The lack of effective processes to coordinate action, such as the relocation of utility assets, between organizations further limits the ability of stakeholders to resolve conflicts in a systematic and scalable manner.

Critical information on assets and their locations is often locked in different data models without defined standards and siloed in separate organizations. Without the ability to efficiently share data across stakeholders, knowledge gaps result during the planning and construction phases of major infrastructure projects. Such knowledge gaps can then lead to conflicts and delays.

Even within organizations, critical information is often not accessible by key resources responsible for planning or building new infrastructure. As such, personnel in the field must work from as-built drawings that do not sufficiently correspond to the reality on the ground. This disconnect makes it difficult and time-consuming for teams to coordinate action, resulting in otherwise unnecessary or redundant work cycles.

To facilitate streamlined and scalable collaboration between key stakeholders, Infrastructure Ontario and Metrolinx developed the Utility Coordination Program (UCP). The UCP is a multistage and comprehensive set of processes to systematically identify conflicts and coordinate their resolution between stakeholders. Underpinning the UCP is the Office of Utility Coordination (OUC). The OUC is made up of:

The ability to collect, analyze and share data across stakeholders and key resources is essential to the functions the UCP and OUC. ArcGIS enables this ability. The ArcGIS system, combined with Microsoft’s Power BI, provides a rich visual context and data management environment for multiple data sources. The key enabler of ArcGIS is the use of location as the common denominator between many different layers and asset types. For example, though a proposed subway line and watermain may have respective unrelated attributes, each exists in a spatial relation to one another. This data can be integrated and represented in 2D and 3D visualizations complete with information such as BIM data, imagery, and land-based data. Additionally, ArcGIS automates identifying instances of conflicts, which streamlines the process of resolving such conflicts. 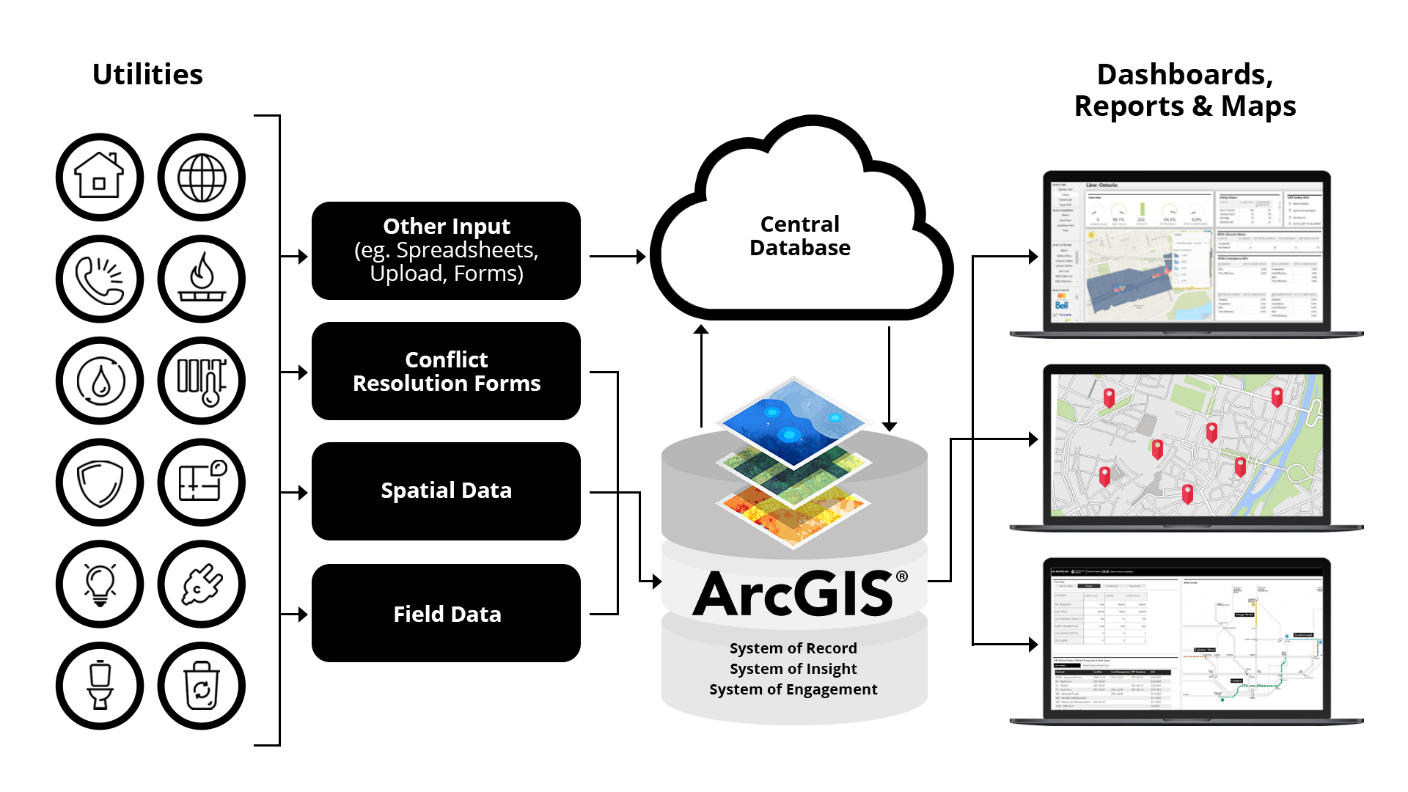 ArcGIS workflow in the context of the Office of Utility

The capabilities afforded by ArcGIS provide an accurate, comprehensive, and timely view of proposed changes and existing infrastructure. In turn, this view enables stakeholders and key resources to know where and when conflicts will occur. This knowledge can be shared between organizations and enable each organization to contribute to and work within a common operating picture.

The pilot implementation of the UCP and OUC on the Ontario Line identified several findings and verified several outcomes related to the use of ArcGIS. In general, the new UCP and OUC enabled a more streamlined process with improved data-driven decision making and communication, more consistent data, clarity regarding responsibilities and transparency into compliance.

The capabilities provided by ArcGIS were instrumental in improving data management practices and facilitating data standardization. The system enabled easier access to accurate and timely data collection. Consolidating data such as proposed and as-built from multiple stakeholders using location provided an accurate and up-to-date common operating picture. Dedicated layers enabled stakeholders to contribute their relevant information. This data was visualized using tools such as web maps and dashboards to make identifying conflicts easier and faster early on in a project. As a result, the pilot found that projects that made use of these capabilities yielded more positive results than those that did not.

Key findings from the pilot

Infrastructure Ontario has leveraged ArcGIS and Microsoft Power BI with Arc GIS add-in to produce several applications and dashboards. These include the OUC Dashboard and OUC Spatial Library, which are used to track and monitor projects, report on compliance with the BTFA and enable visibility into assets across organizations. Indeed, they are being used to track 39 metrics across 8 categories defined by Infrastructure Ontario. 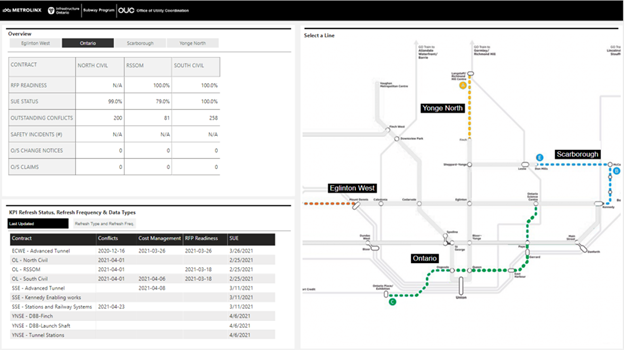 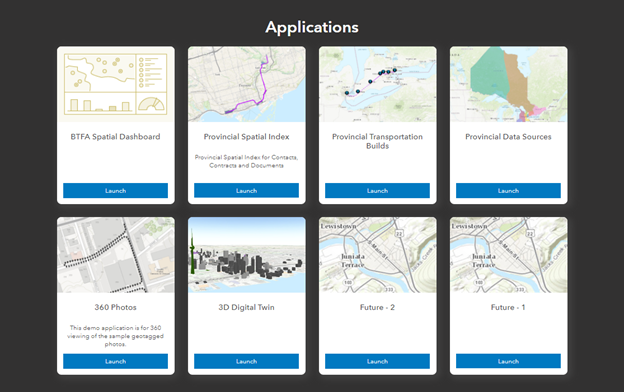 Next steps include conducting a quantitative assessment with the University of Waterloo to estimate the scale of the cost savings that could be achieved using of the OUC and a comparative study to other jurisdictions and their centralized platforms for digital underground asset data.