The Fatal Light Awareness Program (FLAP) aims to help safeguard migratory bird populations by raising public awareness of the dangers birds face in urban environments. Kim Vesterberg, Assistant to the President, is one of a group of co-workers at Esri Canada involved with FLAP Canada. Read about her experiences and how you, too, can get involved.

Kim Vesterberg is passionate about conserving bird populations and raising awareness about the dangers birds face during their annual migrations through urban areas. She shared her experiences caring for injured birds and cataloguing dead birds around the Esri Canada building in Toronto.

Spring is an amazing time of year – days are longer, vegetation is blooming and our migratory birds are returning. But did you know that during spring, while we’re enjoying the songs of those birds, thousands perish in flight? In the Toronto area alone, 1 to 10 birds die per building every year, and the city has over 950,000 registered buildings. A major cause of these fatalities is lighted office towers and reflective buildings in our urban areas. Many species migrate at night, guided in part by the constellations, and are attracted to the bright lights left on, causing birds to collide with buildings. During the day, reflective windows deceive birds because they see the reflection of the sky and trees and collide unsuspectingly with the glass. 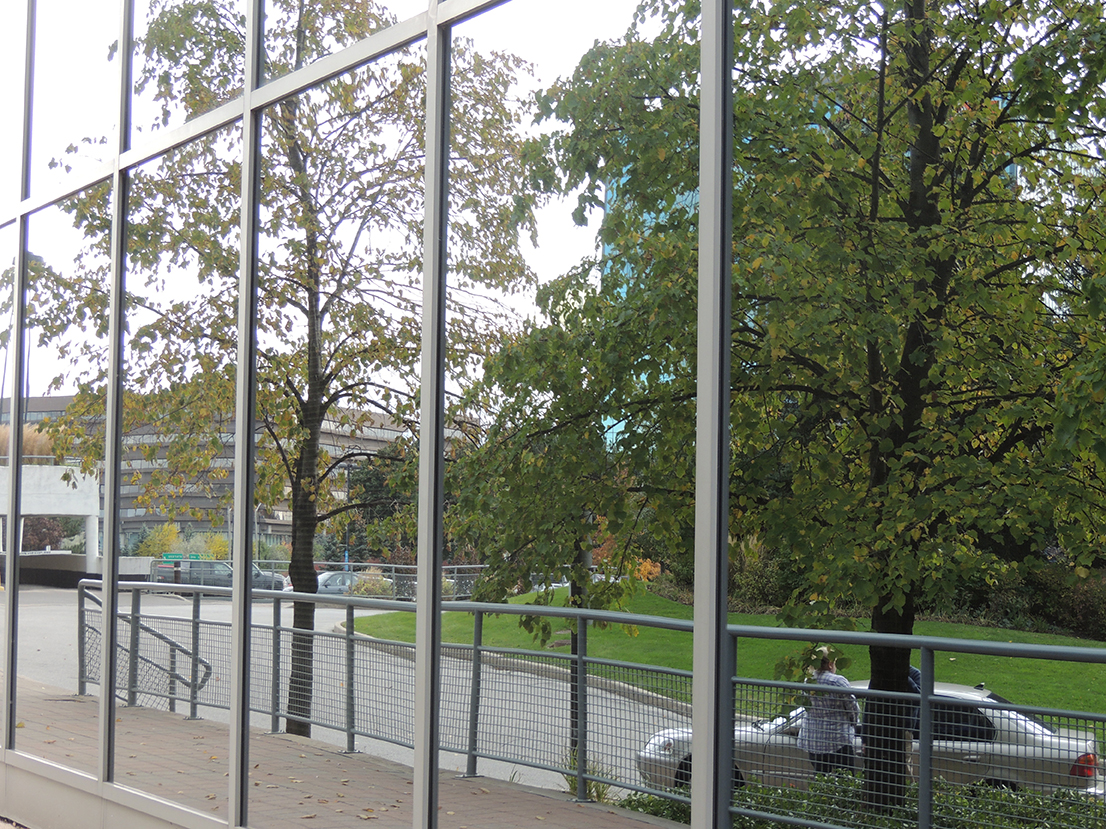 From a bird’s point-of-view, lighted, clear or reflective windows appear to be part of the natural habitat.

I’ve come to learn a lot about birds and bird fatalities since we moved into our nine-storey office building in 2006. A group of like-minded co-workers and I have saved several injured birds over the years, and have also catalogued a large number of dead birds. The FLAP Mapper app created by Cameron Plouffe — a member of Esri Canada’s Research and Education group — in collaboration with the Fatal Light Awareness Program (FLAP), has made this possible in real-time. This interactive map and reporting tool stores bird collision statistics so we don't need to use spreadsheets any longer. 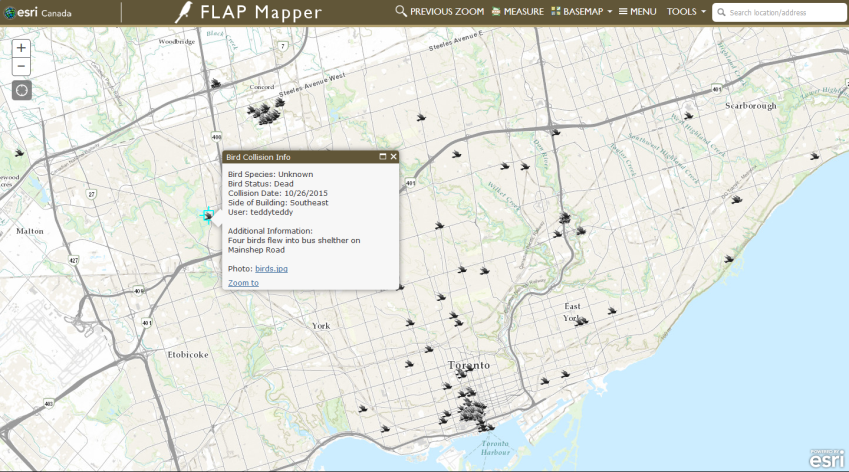 After participating in my first bird patrol rescue at our Toronto headquarters, I was emotionally moved by the experience. 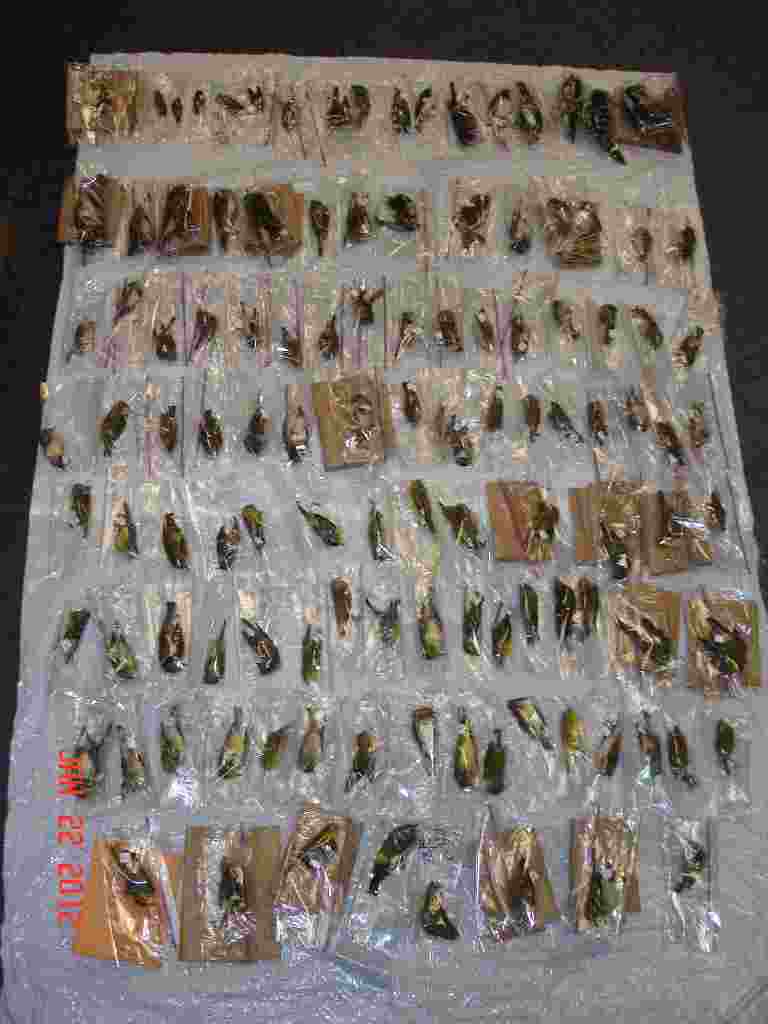 Bird fatalities caused by colliding with the Concorde building during the Fall 2011 migration.

It's the reason I've become an active volunteer. I’m a regular office patroller around our office building, I educate birdwatchers and passersby at Tommy Thomson Park during spring migration, and, most recently, I volunteer for the Annual Migratory Bird Layout at the Royal Ontario Museum (ROM).

On March 8, 2016, the FLAP staff and volunteers arranged 2,100 birds collected after collisions with buildings the previous year. I’d never seen many of the species up close before and the sight of them was beautiful, but at the same time tragic. Meticulously laid out on the ROM’s rotunda floor, the perished birds created a spectacular mosaic from afar, but when visitors stepped forward, they learned the real story. 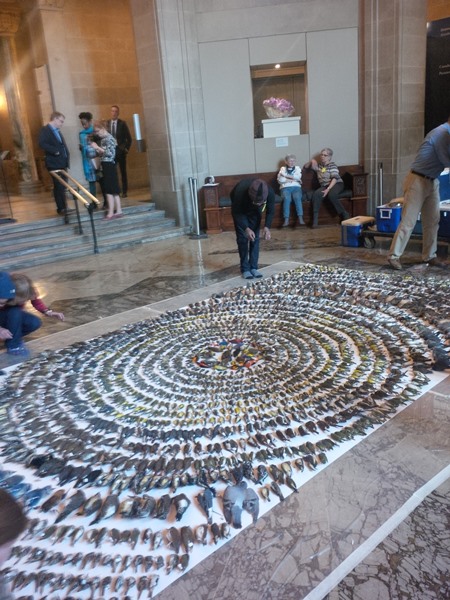 A "mosaic" created on the floor of the ROM from birds that died after colliding with buildings in 2015.

You can help make a difference by learning more about the Fatal Light Awareness Program and becoming a “citizen scientist” by using the FLAP Mapper to report a fallen bird. This user-friendly Web app can be used by anyone on a mobile device or desktop. You simply set up an account, select the location of the bird fatality on the map and provide some information. By helping document bird-window encounters, you’ll be contributing to a global database that will help draw attention to the magnitude of this problem.

At home, you can also help over the coming months by providing coverings for your windows where birds can see the reflection of trees outside and plants from within. Check out the following resources:

Last but not least, remember that cats have predatory instincts. If your pet cat is outdoors, it is on the prowl all day long. Please put a bell on the cat's collar to serve as an early warning system for any nearby birds.

Our migratory birds are delicate and beautiful creatures. Please help us all by learning more about their plight and how you can make a difference.

Thanks to Kim Vesterberg for contributing this blog post.