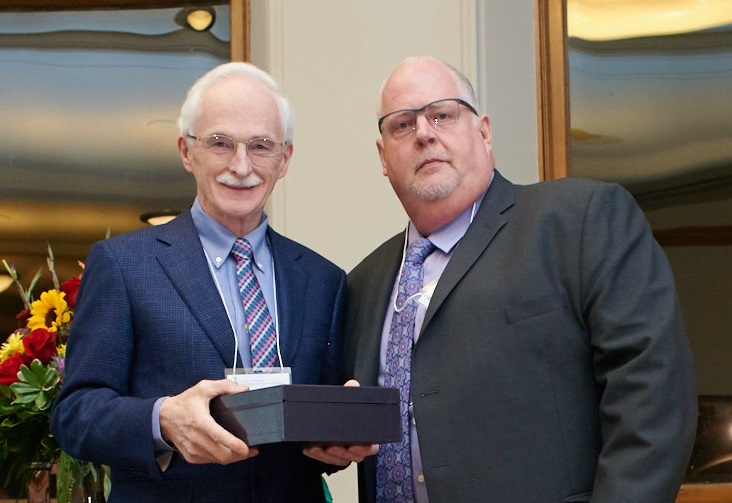 The Honorary President’s Award is one of six annual special awards conferred upon individuals with close and enduring connections to faculty members and students in the Department of Geography. This award is particularly meritorious, as the University of Toronto’s Department was founded in 1935 and is one of the oldest and largest such departments in North America. In 1982 it was joined by the Graduate Program in Planning, and the combined department now offers undergraduate degrees in Geography and graduate Planning and Geography degrees at the St. George campus downtown, and the two suburban campuses, respectively in Mississauga (UTM) and Scarborough (UTS). Hence, it is an outstanding achievement to receive this award from this prestigious academic program.

In the citation for his award, the department recognized Alex’s leadership role in the creation of professional GIS application software, his continued support of the Geography department and its programs, and, for anyone who has ever met Alex knows, his very clear and obvious passion for using technology to promote environmental sustainability. In conferring the 2019/20 President’s award, the department also recognized Alex’s pioneering work in transforming Geography and mapping into a 21st century digital tool that is used by many millions around the world to recognize explicitly the role that location plays as a unifying lens through which land and resources can be better understood. Above and beyond these aspects of Alex’s career contributions, his unwavering and deep understanding of the importance of education for current and future generations of young Canadians is of paramount importance.

I can speak personally and with certainty to his life-long commitment to education, as I have known Alex for over 32 years and have witnessed his incredible passion for learning first hand. In 1987, as a young Professor of Planning at the University of Waterloo, I signed with him and his fledgling company, Esri Canada, the first university license in Canada for ARC/INFO GIS software, and in fact this was one of the first such Esri education license agreements anywhere in the world. Twenty-five years later, in 2012, I changed my relationship with Alex and Esri Canada from client to employee, and over the last seven years I have been able to share some of his passion to bring spatial problem solving through technology use to Canadian students.

In conferring this year’s Honorary President’s award on Alex, the department of Geography also recognizes the fact that under Alex’s leadership Esri Canada has funded now for a number of years an award for graduate student excellence in GIS that is now endowed at the University of Toronto as the ‘Esri Canada Queen Elizabeth II Graduate Scholarship in Science and Technology’. This annual award further underlines Alex’s strong commitment to supporting young scholars in their studies. In fact, the University of Toronto award is only one of a series of annual Esri Canada higher education GIS scholarships that the company funds at each of the sixty Esri-software licensed universities and colleges across the country. These awards are unique among the family of other Esri global distributor companies. They emphasize the fact that strong leadership is not only about company growth and prosperity, but also about giving back and supporting students in fulfilling their career aspirations and dreams. As the Geography department at the University of Toronto has recognized this year, in Alex we have a unique individual who provides inspiration not only to Esri Canada staff but indeed to all participants in the Canadian geomatics industry and members of our broader society to pose questions, gather data and seek answers to the many important issues that we must reconcile to secure the future of our planet.