The Community Map of Canada is a multiscale Web map, which has complete national coverage at small map scales and over 60 per cent of Canada’s populated areas covered at large map scales, thanks largely to government data. If your community is part of the 40 per cent not included because your organization has not opened data up, it may be time to revisit your open data strategy to see what you’re missing.

For many decades immediately after World War II, government organizations worldwide considered paper maps as secret, or at least, as confidential information that was not to be shared with anyone except on a need-to-know basis. In some countries, approval by a senior government official was required to even look at a topographic map of the country. In addition, many national governments (including Canada) often charged a fee to access and use their collected data.

In the 1970s, collection of weather and land digital data was developed for both aircraft and satellite platforms. During the same decade, data collection for any location on the globe began in earnest and on a regular basis. Soon, it became quite apparent that anything visible (either natural or man-made) was open for observation by these moving sensors and thus, hiding map information became a futile endeavor. By the turn of the 21st century, many governments began actively providing map and other spatial data to the public with few restrictions and at no charge.

So here we are in 2015, nearly 15 years after significant amounts of spatial data have been liberated, but some government organizations – primarily at the sub-national level and local level – still do not provide their spatial data in an open fashion.

Why is this? Is it because the data is confidential? Or are there other esoteric reasons?

Some open data is available, but often not a lot

These days, most government organizations collect and use spatial data in their day-to-day operations. Many provide this data for others to use via an open data policy. In Canada, the federal government has mandated that all federal government-collected data be open, including spatial data. This has led to a healthy supply of open geospatial data from the federal government. While many provinces have adopted an open data policy, some are just putting these policies in place. So, at the federal and most provincial levels of government in Canada, some open spatial data is available. The exception here is the cadastral data layer, which is most often not available from the provinces, and there are no plans to make it nationally available anytime soon. For example, in Ontario, cadastral data is created and controlled by Teranet – a private-sector company that licenses their data for a fee.

At the local and municipal levels of government, there’s quite a different picture emerging. Many progressive local governments have made their data freely available to be used in creating apps and other services that would benefit their citizens. There are many examples of these, including public transit timetable apps, street finders, zoning maps and so on. Esri Canada uses open data in support of the national initiative that’s creating the Community Map of Canada – a Web basemap upon which others can develop useful applications. 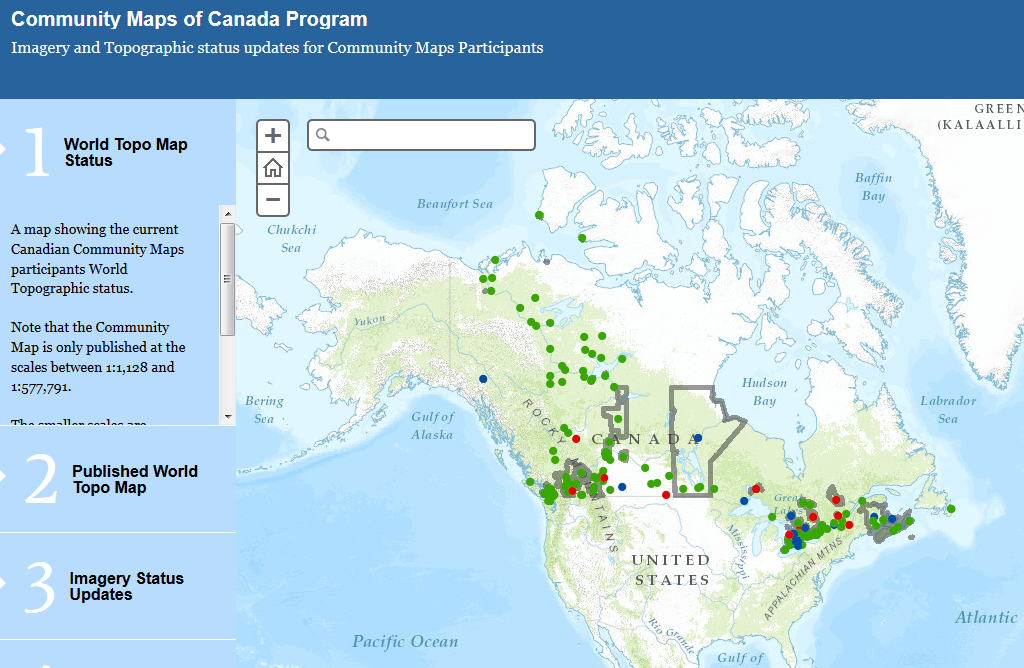 Currently, the Community Map of Canada has coverage of more than 60 per cent of the country's populated areas at large map scales. This map shows participating communities that have contributed their open spatial data in support of completing the national Web basemap.

Open data no longer an option, but a must for governments

Why don’t various municipal and local governments make their data available for others to freely use? This is a question to which we’ve heard all kinds of answers. But no matter what the municipality’s concern is about opening their data up, there’s really no compelling reason these days for governments to not release their data.

In fact, there’s a federal government program promoting the release of open data. There’s also a Canadian and an international movement to make more government data open and available. Furthermore, there are several open data conferences being held this month in Ottawa where the benefits and uses of open data will be articulated and discussed. Hopefully, this will create more momentum for the open data community in Canada.

There’s even an Open Data Handbook that discusses the legal, social and technical aspects of open data. The handbook can be used by anyone but is especially designed for those seeking to open data up. It discusses why to go open, what open is and how to ‘open’ data.

If you work for a government organization that doesn’t have an open data policy, now is the time to start developing one. Have a look around the Internet to get informed and ask questions both internally and externally about releasing your spatial data. The benefits are numerous and include increased efficiency, transparency and innovation. Opening data up to the public will only make both you and your organization more successful.

What challenges or concerns does your organization have about providing open data? Share your thoughts by leaving a comment below.