Sharing information through GIS-based Web apps is growing in popularity and the continuous release of out-of-the box tools is making it easier and easier to create them. In fact, the proliferation of Web apps using Esri technology inspired us to create a gallery to show off all the impressive work that’s out there. Learn more about our new App Showcase and check out six apps you’ll find on display.

We’ve created a stage for Web apps to step up and take the spotlight: App Showcase. It brings together all the great apps created by our user community and Esri Canada staff that use Esri technology. The App Showcase is brimming with GIS-based apps, many of which were configured using easy-to-use templates that helped their creators look like Web programming rock stars. 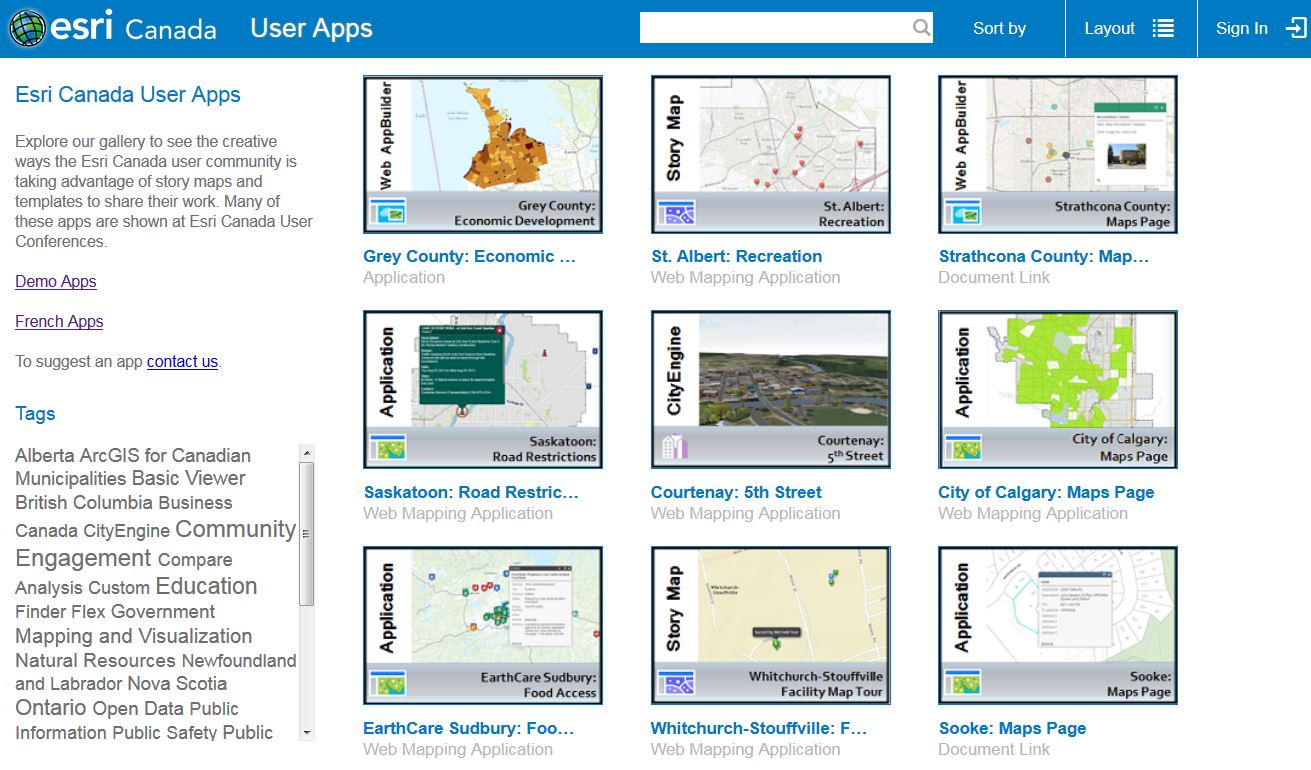 Think of our new App Showcase like a greatest hits album of Canadian Web apps.

City of Calgary: Maps Page The City of Calgary has created a map gallery with a wide selection of apps organized in categories. One app that jumped out at me is the 2013 Calgary Flood Recovery Projects and Imagery app, which delivers residents up-to-date information on the City’s ongoing recovery efforts. One neat feature of this app is a spyglass that you move with your cursor across the topographic basemap so you can view satellite imagery of a specific area. 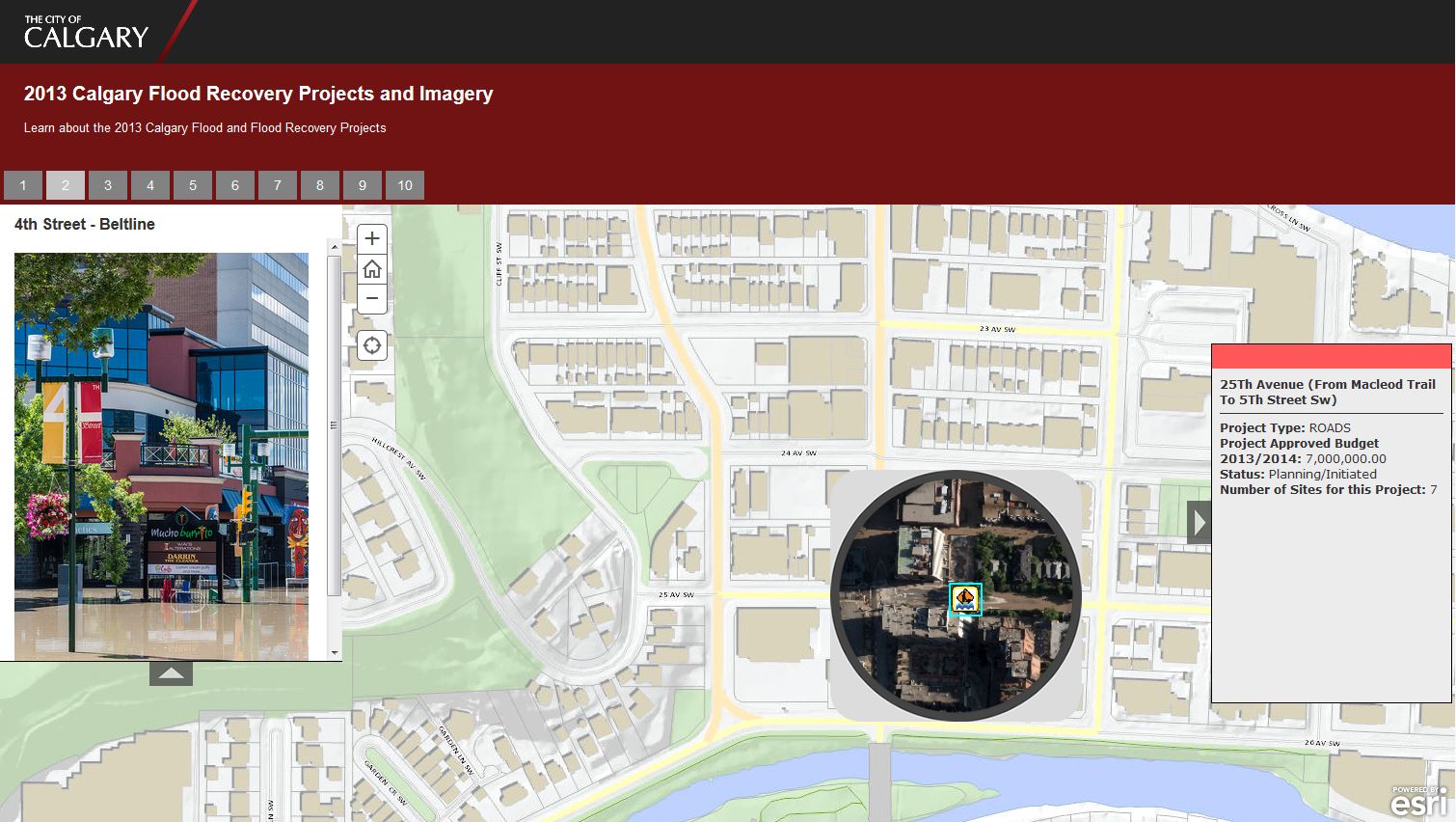 Halifax Transit Draft Network This app visualizes routes on an interactive map that provides information for the Halifax community about transit schedules, including service frequency and hours of operation. I like the ‘Bookmark’ function on this app: clicking on a neighbourhood name and zooming right to its geographic area. Very handy. 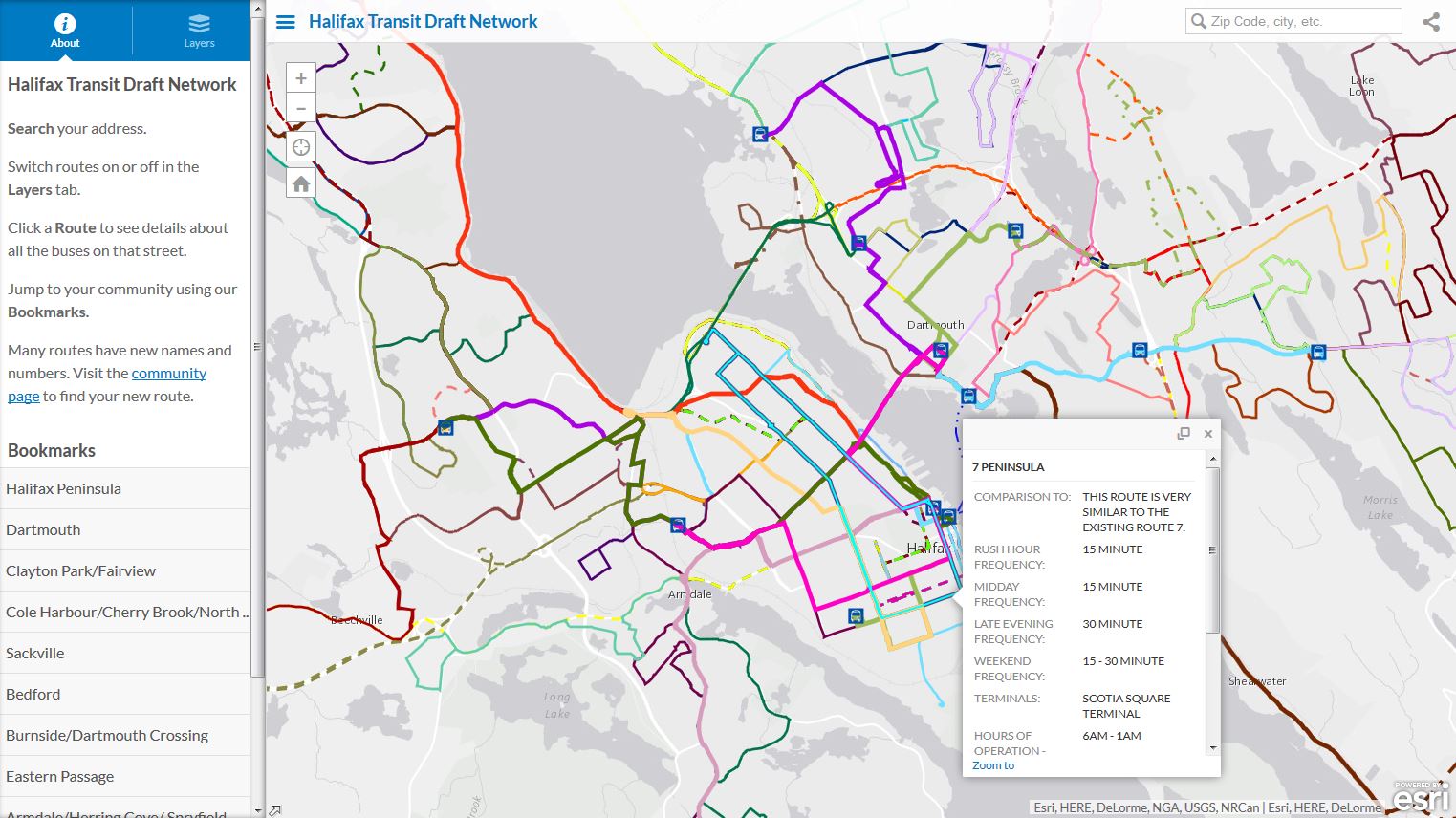 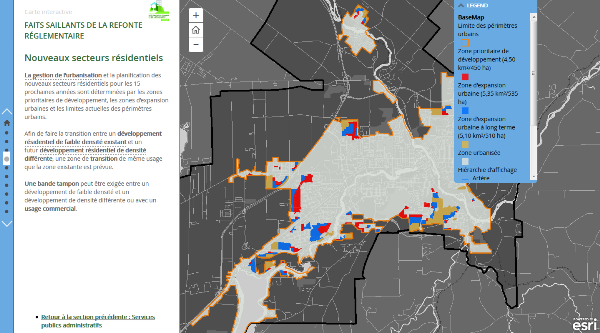 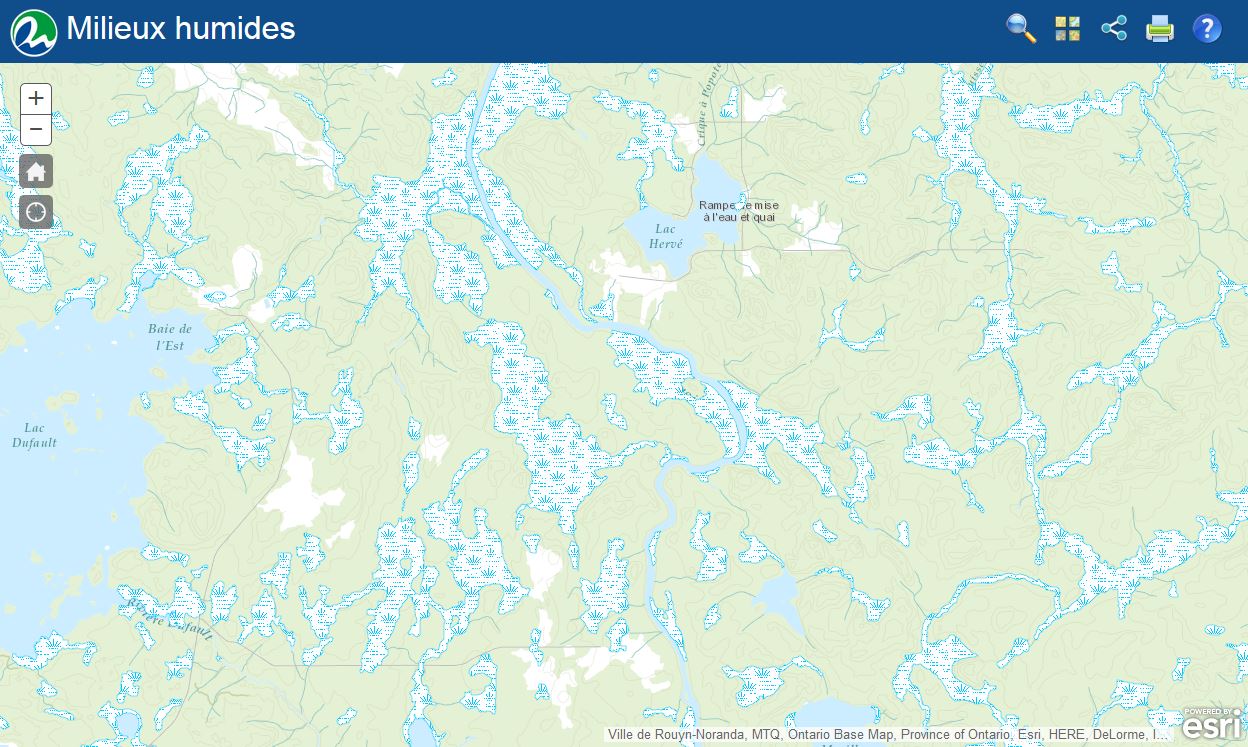 Canada from the International Space Station (ISS) If you’re space geek or a Chris Hadfield fan (who isn't after watching his cover of David Bowie's Space Oddity filmed on the ISS?), you need to check out this app. This story map features photos and accompanying commentary of Canadian cities and landmarks taken by the famous Canadian astronaut from the International Space Station. The app was inspired by Dave McLean, a member of the GIS Faculty at the Centre of Geographic Sciences (COGS), who has led some really interesting work integrating Twitter and GIS technology, which has garnered international media attention. 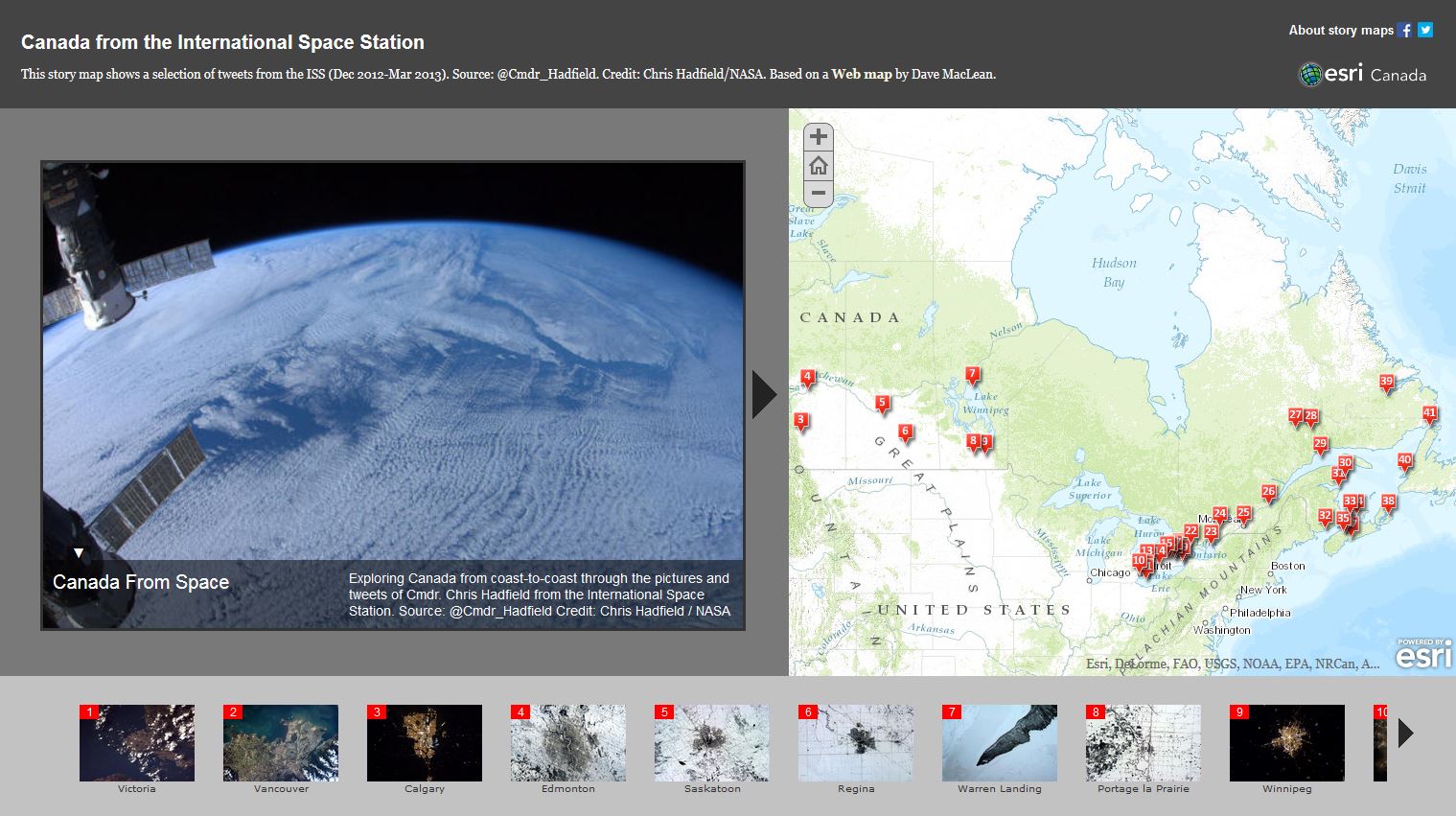 My GIS Moment And finally, a shameless plug for my marketing team: an app created by our pal Mike Gregotski in our tech marketing group to help promote our annual User Conferences last year. We encouraged people to tweet a memorable GIS experience with the hashtag #myGISmoment and their city and province, which Mike configured the app to automatically place on the app’s map. 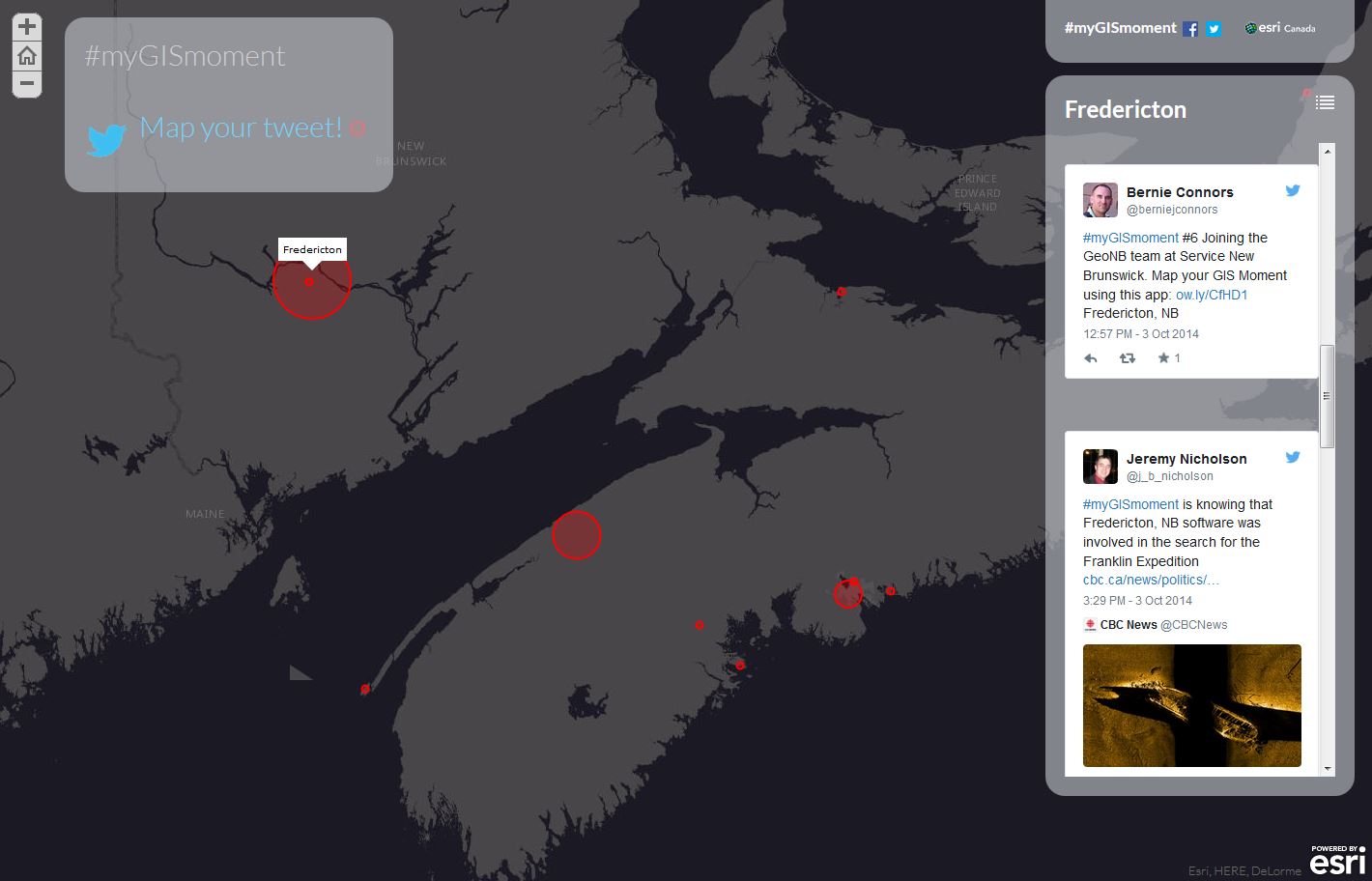 The #myGISmoment app we developed in support a of campaign that encouraged people to share memorable GIS experiences.

But enough about what I think—give us your impression of what you see in the App Showcase. Which apps capture your attention or inspire you to create your own? Also, if you have, or know of an app, that you’d like to suggest, please contact us and we’ll consider adding it to the Showcase. We’re always on the lookout for new and interesting examples of Web applications that use Esri technology.