Esri Canada relies on open data to generate an accurate, up-to-date and detailed topographic and imagery basemap. Open data is far from being just a great add-on to the Community Map of Canada — it’s a key element to the success of the program.

Esri Canada’s Community Maps Program relies on user contributions to make our topographic and imagery basemaps complete. Published data is supplied by organizations that have joined the program by signing a participation agreement. The Community Maps Program also draws on open data that’s publicly published by organizations to improve the basemaps. Far from being just a nice add-on, open data has come to play an integral role in creating the topographic and imagery basemaps. In fact, we prefer that data is made available to us through open data programs rather than through signed agreements. Not only does it gives us the flexibility to work with the data as we need see fit, but it also makes the data available to the wider GIS community to use. 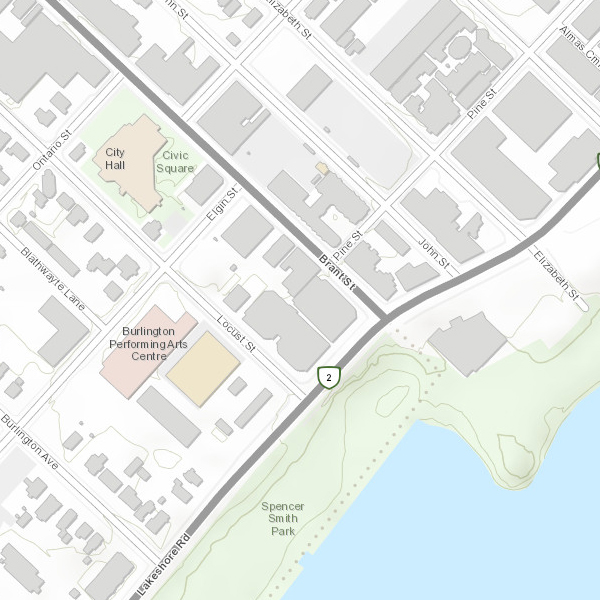 A section of the world topographic basemap built using open data copming from the City of Burlington and supplemented with open data provided by the Province of Ontario.

At a national level, the Government of Canada makes its topographic data available through an Open Data Portal free of charge and without any restrictions. This is the same data used to create both the 1:50,000 and 1:250,000 topographic map series (As an aside, an easy way to access these maps is via this Web map that displays the extents of each map sheet. Click on the map tile to get the pop-up. In the pop-up is a direct download link to that specific map sheet.) This data is also used in the Community Maps Program to build the basemap where more detailed data from other sources is unavailable. A number of provinces have either made some (e.g. British Columbia) or all (e.g. Nova Scotia) of their basemapping data freely available, and these datasets have been used on their own or as supplemental data sources when mapping-specific communities that have contributed their own data.

Below is a list of the current Community Maps contributors that have made their data open and accessible for anyone to use. The quantity of the data offerings varies from contributor to contributor – some have only posted three or four data layers; others have posted hundreds. Many of the open data sites have adopted the Government of Canada’s open licence as their own. This license essentially allows users to do whatever they wish with the data, provided they attribute appropriate credit. Other open data sites have their own licenses and may be more restrictive. It’s always a good practice to check a site’s specific data license to ensure that the data they provide can be used for the purposes that you intend to use it for.

It should be noted that not all of these contributors are yet published as part of the World Topographic Basemap. Some of these are still a work in progress and are expected to be published soon. Check our Community Maps Status Map for details. As well, there are many other community open data sites that aren’t accessible through the Community Maps Program, but we plan to publish them in the future. If you know a community that has made their basemapping data open, contact us and we’ll include it in the queue to be processed.