Many of government’s major activities are governed by policy, and government policy implementation can have far-reaching effects on the public’s quality of life. These policies often include location or spatial relationships so using GIS in creating and implementing policy is important for good government. Let’s take a look at why Web GIS is such a valuable tool for government policy makers.

Public policy guides governments’ actions and is generally developed and implemented in consultation with other non-government groups. No matter what level of government is interested in setting policy, the importance of quality decisions made within a solid policy framework cannot be understated. Public policy can be related to many subjects – from planning, infrastructure, land use, environment, resources and taxation to parking, snow removal and garbage pickup.

Public policy has several aspects. First, it is generally not developed solely within government. Often, public comment and input is gathered as a result of government consultations. Second, once the policy is studied, approved and implemented, it’s important for government, no matter what level, to convey this policy to the public in a clear, accessible fashion.

Next, the government organization needs to implement the policy consistently across its jurisdiction. Finally, government needs to enforce this policy in its operational activities to ensure that the majority of the public is benefitting from it.

For example, in the U.S., the use of GIS for developing and communicating public policy has been known for some time. Read how Policy Makers Increasingly Use ArcGIS Online to Understand, Explain Issues.

As it turns out, Web GIS is a great tool for all facets of public policy development and implementation. First and foremost, Web GIS is spatially oriented, as are most public policies. It allows policy makers to easily study and evaluate any spatial relationships.

Web GIS is also useful for informing the public about the policy. It is easily accessible via the Internet and generally requires only basic computer skills and little training to use. As well, it’s an efficient tool for collecting and displaying community feedback on the policy. 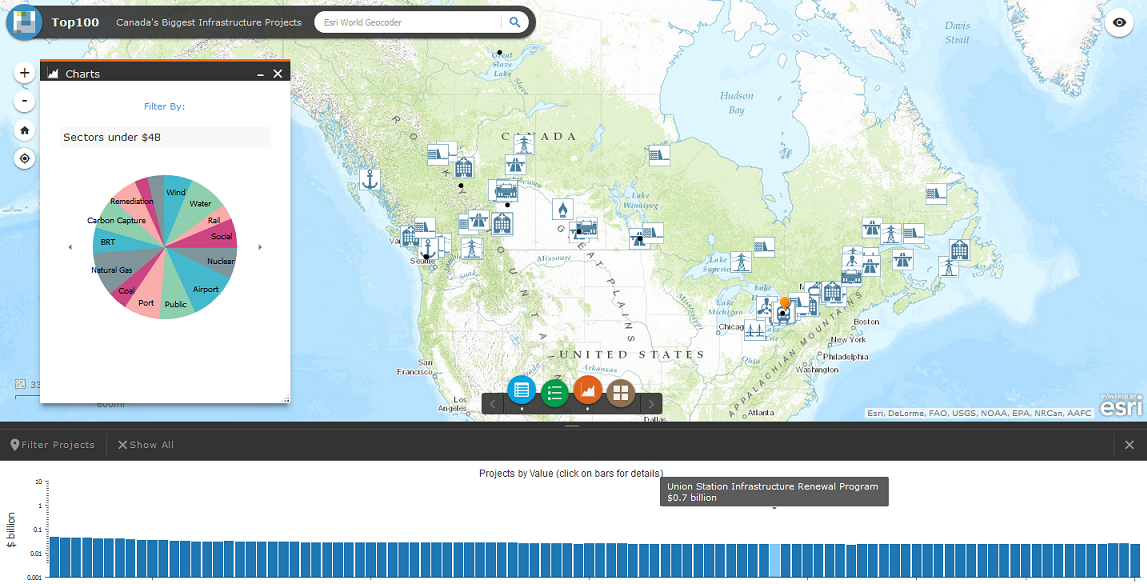 This Web GIS site, top100projects.ca, shows information about the biggest infrastructure projects in Canada that can be filtered, charted and viewed by project, sector, funding type, province and dollar value.

Esri Canada has a number of demonstration Web sites that show policy development, information and feedback within a Web GIS context. Here are a few selected examples.

So, does Web GIS help policy makers with many aspects of government policy development and implementation? Empirically, it certainly appears that governments that use Web GIS for policy making and application have been very successful at creating quality public policies. Several jurisdictions have started with a few sample policies for evaluation and have since moved to broadened implementations.

If you’re a policy maker, what’s stopping you from giving Web GIS to support your work a try?