The Trans Canada Trail Organization and Esri Canada recently collaborated to create a new and improved interactive map using the latest in Web design techniques and ArcGIS technology. Learn about the new Web-based map, why it’s been refreshed and how it’s become an important tool for planning, fundraising and promotional efforts in this interview with Charles-André Roy, Trans Canada Trail’s GIS Manager.

The countdown to complete the Trans Canada Trail—a pan-Canadian effort to link a network of over 24,000 km of recreational trails across the country—by July 1, 2017 is just over a year away. 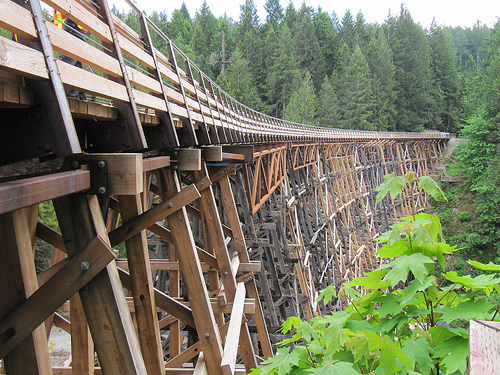 The Kinsol Trestle (above) on Vancouver Island is part of the Cowichan Valley Trail—one of nearly 500 individual trails that make up the Trans Canada Trail.

The Trail is now 80% complete and to help push efforts as the initiative heads into the homestretch the Trans Canada Trail Organization—a non-profit charity that promotes and helps develop the Trail—has relaunched its interactive map.

AB: Why is an interactive map an important aspect of Trans Canada Trail’s Web site?

CH: It allows us to showcase the Trail by allowing Canadians from coast-to coast-to-coast to access the most up-to-date Trail information and to use this map to plan and share their hikes. Not only has it enhanced access to the most up-to-date information for trail enthusiasts, it has been an extremely effective internal and external tool for planning, fundraising and promoting the Trans Canada Trail since 2011. The interactive map is viewed by more than half of the users visiting our Web site.

AB: What are some of the improvements that have been made to the interactive map that really stand out for you?

CH: The Esri platform has served as the foundation for continued development and enhancements to our interactive map over the years. Esri Canada has adopted such an agile approach to re-developing the interactive map by leveraging the latest Web design techniques and ArcGIS Web app development tools which has helped us improve the Trail user’s experience. Trail enthusiasts can now not only find the Trail closest to them, but find directions to access specific Trail segments, identify parking, access points and rest stops, and explore the Trail with photos. The fact that it provides geolocation and is mobile friendly makes it possible for users to access information, while they’re out on the Trail. Finally, it makes it easier to find places and trails from coast-to-coast-to-coast. 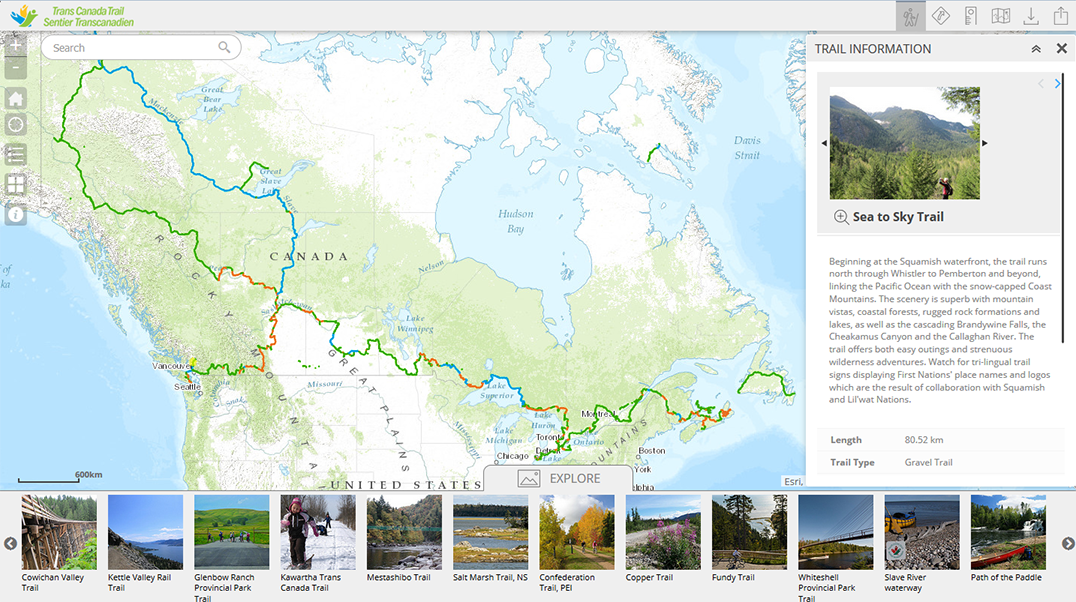 AB: How do you feel the visitor experience to the TransCanada Trail map has been improved?

CH: The new interactive map is now mobile friendly. Our former interactive map appeared very small on a mobile screen and almost unusable. Now, the map is much bigger and users can also geolocate themselves in order to find the nearest trail. Also, it’s easier to find many of the tools available on the interactive map. The ArcGIS Web AppBuilder technology offers a well-designed template that makes tools easy to find: they’re all placed in the top bar menu. Overall, the user experience is more user-friendly. For example, simpler user interface, better access to tools and effective organization of tools and information showing as panels instead of pop-ups.

The new interactive map also makes it easier to search places or trails. Now it’s one search box to search everything. This is an improvement over the old application. Getting directions has been enhanced, too. With the new interactive map, users can plan their trip on the Trail with greater ease by answering one of the most frequently asked questions we’ve received over the years: “How do I get to the Trail?” Finally, users can now access more information about trails, such as descriptions, photos, parking and external Web sites. 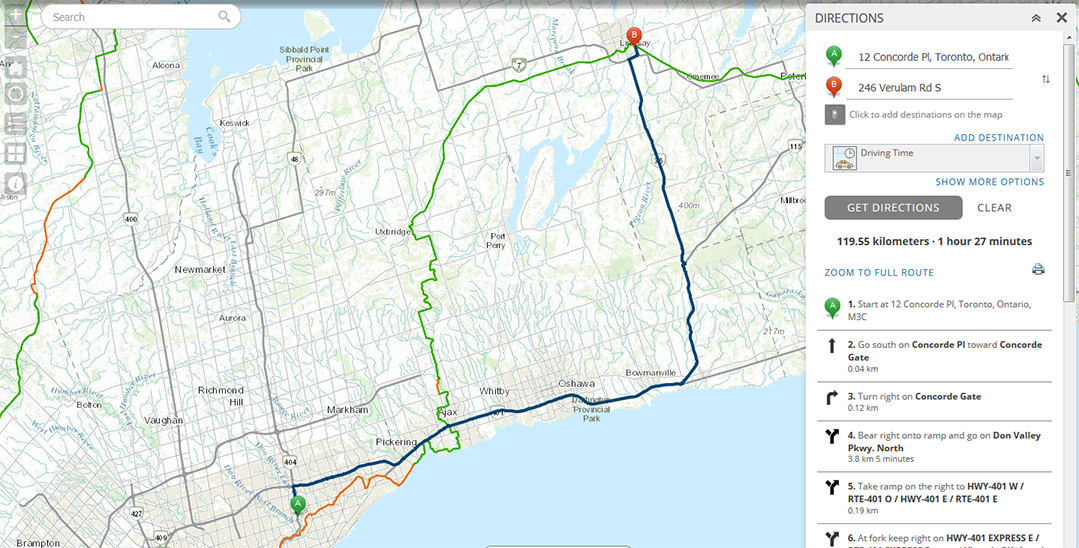 Trail users can use the interactive map’s navigation tool to get directions to the trail. The graphic above shows driving directions generated by the app to a trail access point in Lindsay.

AB: From a technical standpoint, how has the new technology made it easier to update and share content?

AB: How many total people have visited the interactive map since its launch? 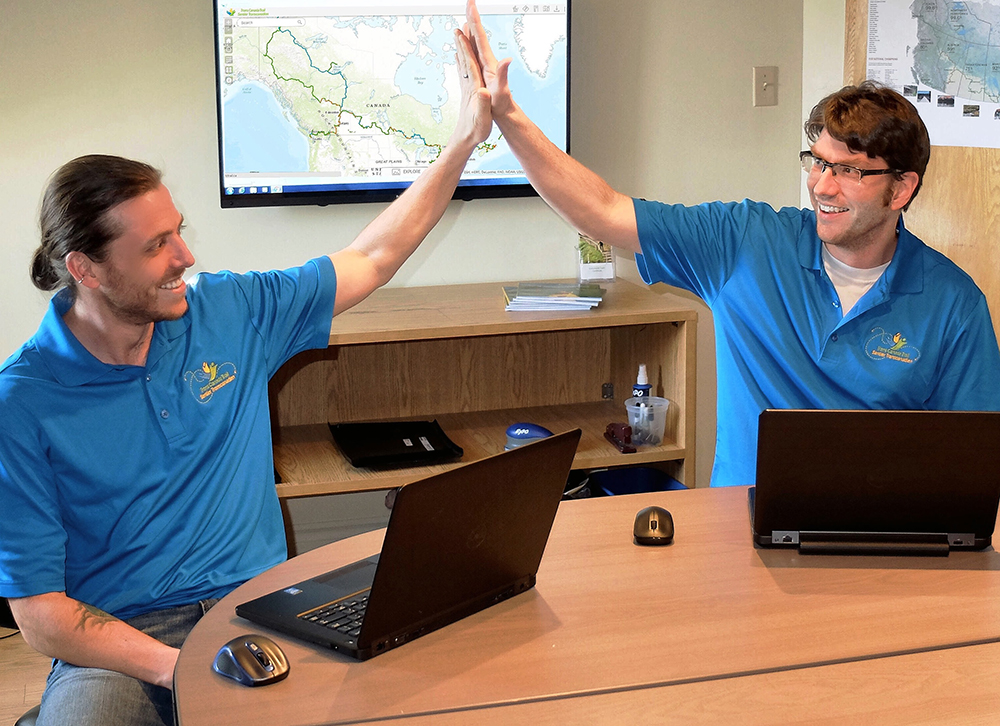 AB: How has the updated interactive map helped TCT achieve its goals?

CH: It has been an extremely effective internal and external tool for planning, fundraising and promotion of the Trans Canada Trail. For many years, Trans Canada Trail staff and its partner used the map to facilitate trail building: one of the main goals of the organization. The interactive map is consulted every week in order to get the latest up-to-date general information about trail sections. It’s reinforcing our relations with Trail Partners by giving them some tools for their daily business and by showing visually their work to the users.

The interactive map also contributes to build a strong reputation and strengthen the organization by raising the organization profile as a communication and marketing product, and by increasing the visibility and presence of the Trail across the country. Finally, the interactive map helps to generate funding and build public support as a useful tool for trail users that want to see the progression of the Trail across the country and know where sections that still need to be added are located.

The new interactive map is a powerful application that engages, attracts and supports trail users. The interactive map is definitely contributing to promote the knowledge and the pride of the Trail by creating a Trail legacy for future generations. As we celebrate Canada’s 150th anniversary of Confederation, it’s our hope that this national iconic initiative will exemplify Canadian pride and unity, and will be a multi-generational gift, giving Canadians and visitors the opportunity to explore this vast and beautiful country we call home.

AB: Have you had any feedback from trail enthusiasts, trail champions, colleagues?

CH: We’ve had incredibly positive response to the interactive map from Canadians of all ages. In the short term, we’ll be producing a short video tutorial and user-guide to make it easier for users to get the most out of their interactive map visit.