Presenting school projects in a creative way can be challenging for some students. Florian Goetz, a graduate from Dalhousie University’s School of Planning, has taken his thesis project about the sea level rise in Halifax’s Northwest Arm to the next level through an innovative visualization tool: story maps. Discover how you can use Esri Story Maps as a presentation resource for your school projects with September’s App of the Month.

*Sniff* *Sniff* Do you smell that? *Crckkk* *Crckkk* Do you hear that? It’s the smell of the crisp September air and the sound of pencils being sharpened. Those can only mean one thing… it’s back-to-school season!

To celebrate every student’s favourite time of the year, we’ve selected a student app for September’s App of the Month – Viewing Halifax’s Northwest Arm with Extreme Water Levels – created by Florian Goetz, a recent graduate from Dalhousie University’s School of Planning.

Florian wanted to represent sea level rise through a different visualization tool. He was inspired to create his app while exploring the National Oceanic and Atmospheric Administration's (NOAA) Sea Level Rise Viewer, where a dynamic map shows changing sea levels, and at the same time, displays the change in pictures from a person’s perspective (street level).

His project focused on studying Halifax's Northwest Arm (The Arm). Similar to other coastal areas of Halifax, The Arm is vulnerable to sea level rise and other events that can raise water levels. There are various tools available for visualizing sea level rise, including topographic maps, miniature models and computer simulations, all with their own strengths and weaknesses. Florian decided to use Esri Story Maps as it provided an opportunity to use horizontal and vertical perspectives on sea level rise. He selected the Story Map Journal, which is an ideal template to use when you want to combine narrative text with maps and other embedded content. It contains entries, or sections, that users simply scroll through. Each section in a map journal has an associated map, image, video or web page.

Florian took pictures of The Arm in November 2015, and the majority of the project work (editing pictures to simulate different water levels and creating the story map) occurred between January and March (2016). He completed the final copy of his story map after his final thesis presentation. View the app in full-screen here.

On why he chose to use Esri Story Maps for his thesis project, Florian explains: “I wanted to create something similar to NOAA's Sea Level Rise Viewer. I’ve used Esri products such as ArcGIS Desktop in other courses, so I was confident that I could easily learn how to use a new Esri product.”

“I also used Adobe Photoshop to edit the pictures in the story map, along with Flaming Pear's Flood plugin. I needed to play around with the plugin for a while before I understood what I was doing,” continues Florian. “I’ve really enjoyed using the ArcGIS platform because of how transferrable knowledge, skills, input and shortcuts are between different products. I also like how easy it is to find help online on Esri websites and troubleshooting forums. I find that I’m often not the only one who has a certain question or problem.”

Visualization is a commonly used tool in the field of land use planning. Showing the public, stakeholders  and decision-makers the potential change in land use (e.g., a proposed development or a natural disaster) can help give a better understanding of the potential change. With a better understanding, a more informed decision can be made. For example, a coastal area like The Arm is vulnerable to future sea level rise and storms. A restoration and protection project (raising the sea wall) would be very costly. Florian’s story map focuses on public areas along The Arm and shows the vertical extent (how high water levels could rise) and the horizontal extent (how far inland the water could reach) in different scenarios. A land use planner could then easily use his story map to support their recommendation for a proposed project. 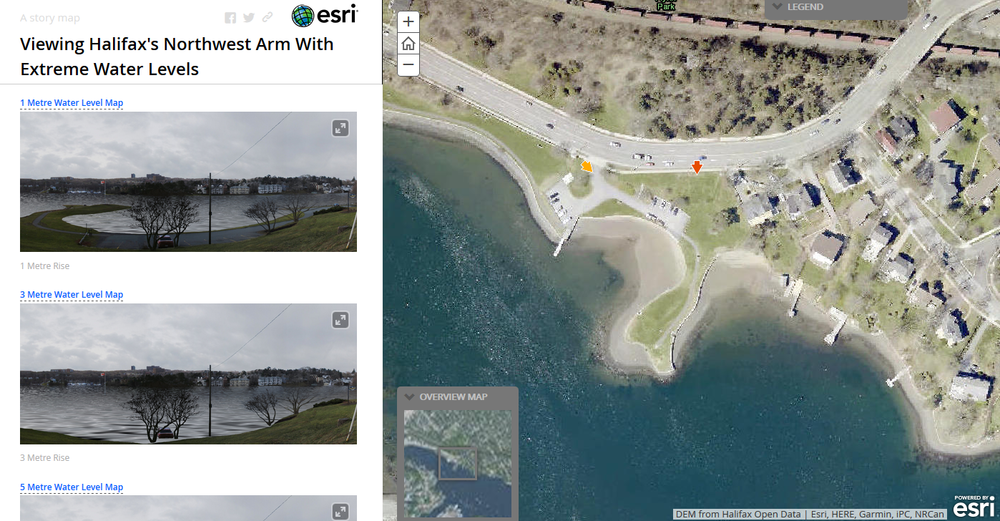 A popular aspect of Florian’s story map are the images used. Many of his peers noticed his attention to detail, including ensuring that the water properly wrapped around objects in each picture.

Florian has plans to take his story map even further. Future improvements include further customizing the story map, redoing some images and surveying the public to get their feedback on the story map.