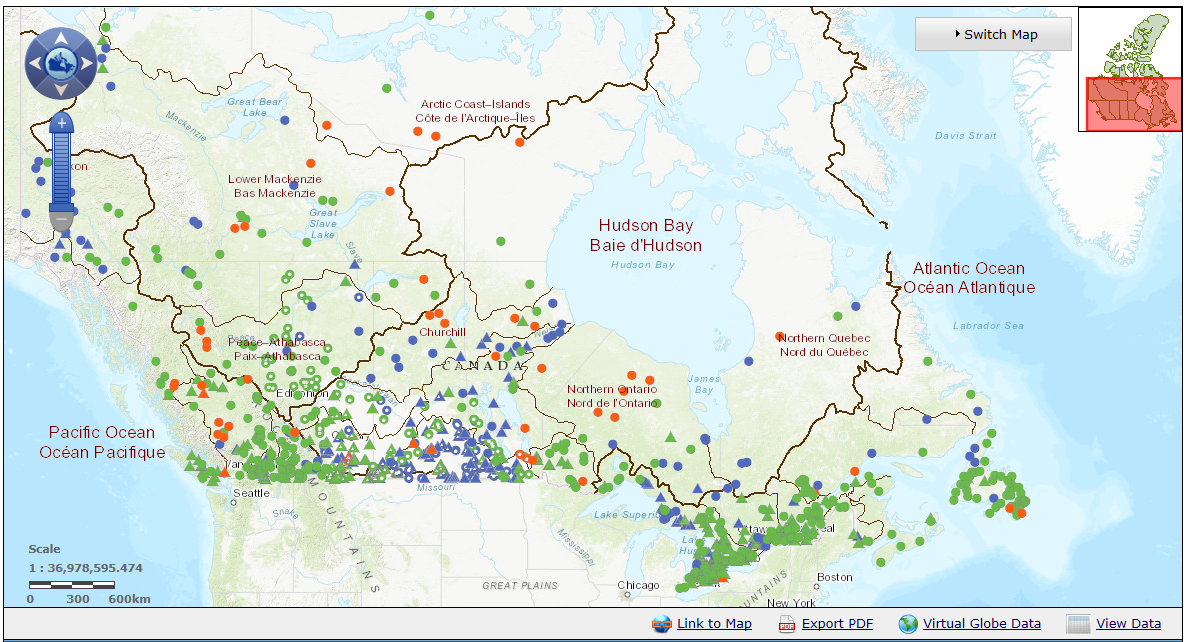 The seventh session of the UN Committee of Experts on Global Geospatial Information Management (UN-GGIM) was recently held with almost 400 delegates from circa 90 countries and international organizations active in the field of geospatial information management.  The Canadian government representatives at UN-GGIM were from Natural Resources Canada (NRCan) and Statistics Canada. Prashant Shukle, Director General of the Canada Centre for Mapping and Earth Observation, spoke of the importance and the role of open data.

As part of the Federal Floodplain Mapping Guidelines series, the Government of Canada has released the “Airborne LiDAR Data Acquisition Guidelines”. The intention of these guidelines is to provide the minimum specifications that lead to consistent airborne LiDAR data acquisition across all levels of government in Canada, as well as to improve international cooperation with the United States along areas of cross-border data collection.

City of Edmonton tops the Open Cities Index ranking for 2017

Statistics Canada is leading a new initiative to improve existing georeferenced data on buildings across all communities in Canada. The project is an opportunity to explore new forms in co-production of open data. Simple building information such as geolocation, building footprint, full civic address, and type of use is of major societal value. This information, however, is often lacking in some areas or not completely accessible on a single open data platform.

Management of land, water and natural resources to meet social, economic and environmental outcomes is a priority in many jurisdictions. In Alberta, Cumulative Effects Management (CEM) frameworks, such as Integrated Resource Management (IRM), are being implemented to enable sustainable land and resource management.  Technologies that enable more accessible, timely, scalable, interoperable and science-based data upon which governments and stakeholders can base informed decisions are foundational for the success of any CEM/IRM initiative. Earth observation (EO) data and technologies meet this need, and form an integral part of the spatial data infrastructure needed to support these approaches.

The U.S. Senate has passed the Open, Public, Electronic and Necessary (OPEN) Government Data Act, a bill aimed at providing a government-wide mandate requiring federal agencies to publish their information as open data. The Act still needs to be passed by the U.S. House of Representatives and then be signed into law by the president.

The BC Data catalogue helps users to find, understand and explore data. The catalogue also provides contact information so that data users can contact Data Custodians for additional information if required. Data, APIs and applications registered and presented through the BC Data Catalogue are managed and provided by Data Custodians from across the broader public service. DataBC helps the province manage data as an asset and enables public servants and citizens to share and use data.

SDI: Think ‘adaption’ and ‘cultivation’ rather than ‘construction’

While recent advances in geospatial technologies offer great promise, the specifics of whether and how data and information are used too often remain a black (magic) box; spatially enabled decision-makers are a bit like idealized unicorns. Without a keen knack for navigating political and administrative influences, spatial enablement can at times seem like the stuff of magic and unicorns – a fantasy. Simply creating and providing useful information does not mean that it will be used, or used wisely. Similarly, a ‘partnership framework’ for spatial data infrastructure (SDI) can seem like a mythical item.