Now that GeoAlliance Canada has been established, what’s the next focus for the organization? Which Canadian federal site was selected as the ArcGIS Open Data Site of the Week? Find out these and more in this month’s SDI Snapshot.

Here’s a look at what’s happening in Canada and globally in the world of Spatial Data Infrastructure (SDI). This October 2015 post is a collection of the latest and most significant SDI news, data, products and events. 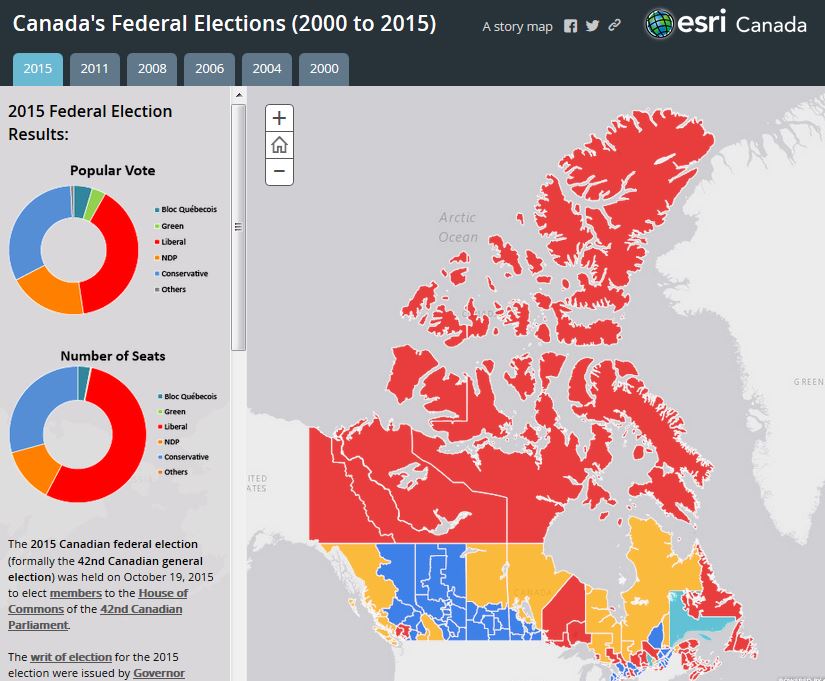 The 2015 Canadian federal election was held on October 19, 2015 to elect members to the House of Commons of the 42nd Canadian Parliament following one of the longest election campaigns in Canadian history. The Liberal Party won 184 seats, allowing them to form a majority government. The Conservative Party won 99 seats; the New Democratic Party won 44 seats, with minor parties winning 11 seats. This online map shows the spatial distribution of party support across Canada for federal elections held since 2000. GeoAlliance Canada starts by opening doors

Since the close of the Canadian Geomatics Community Round Table (CGCRT) in April 2015, the GeoAlliance Canada Interim Board of Directors has been busy laying the groundwork for the organization. GeoAlliance Canada has applied for and been granted not-for-profit status, submitted funding proposals and established the organization’s framework, including a management team, address and bank account. With this first phase now complete, the group is now focused on growing membership and, more importantly, the breadth of the organization.

In a part of Manitoba so remote you have to fly in by helicopter, a US research team spent the summer in the polar bear capital of the world deploying the latest tool – Unmanned Aerial Systems (UAS) – in a nearly five-decade-old ecological study. As part of the “Hudson Bay Project,” a collaborative research program that includes partners from the US and Canada, the group conducted nearly 90 test flights from Wapusk National Park to show that UAS can be used to study non-invasively the overabundant geese in the region and their impact on the tundra landscape. 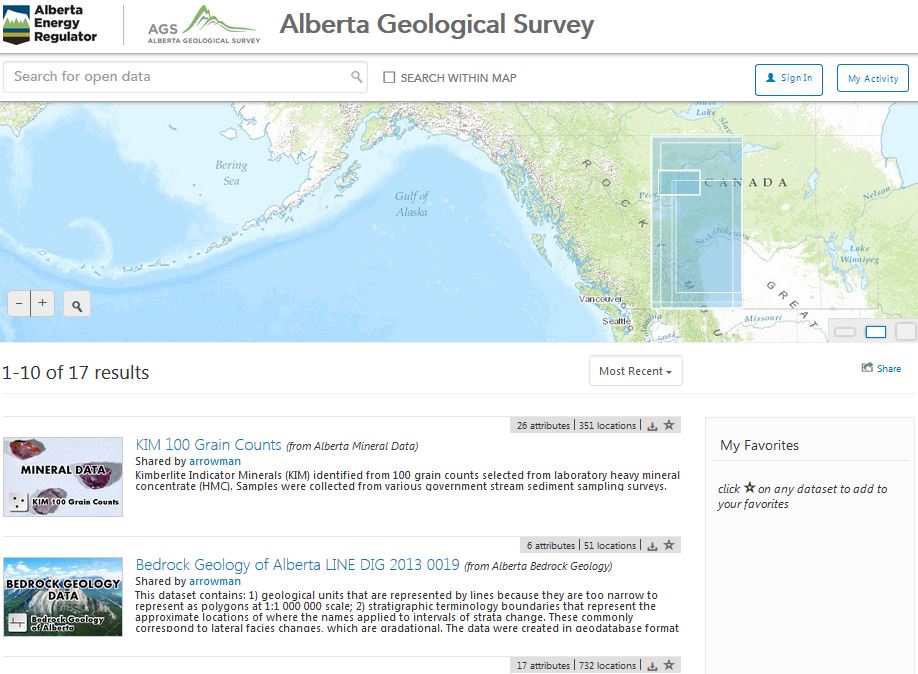 Governments and organizations have been hard at work creating open data sites to make their authoritative data accessible, discoverable, explorable and collaborative. Recently, the Alberta Geological Survey Web site was selected as the open data site of the week. It uses ArcGIS Open Data to share GIS data about the geology of Alberta and augment their open data repository, which makes more than 1,000 datasets available in .zip archives.

Marketers must embrace visual communication to cut through the ‘data overload’

Esri UK’s recent survey showed that 47% of British citizens are stressed by marketers targeting them with irrelevant content and 66% find it easier to understand documents and stories that contain maps and graphics. Over 35% of British citizens are affected daily by debilitating stress from ‘data overload’. The study highlights a growing problem where our constantly connected culture is leaving many people struggling to process the vast amount of emails, news, social media posts and digital documents both at work and in their personal lives.

When discussing the challenges posed by big data, intelligence analysts speak of the four Vs—volume, variety, velocity and veracity. Geospatial intelligence is the ultimate big-data scenario where all of these issues are confronted, with huge volumes of data coming off numerous platforms and sensors, high-streaming rates combined with rapid data aging and homogenization of datasets with different formats, structures and quality. All of this culminates in the challenge of making quick decisions on the fitness of data to gain value for effective decision making. 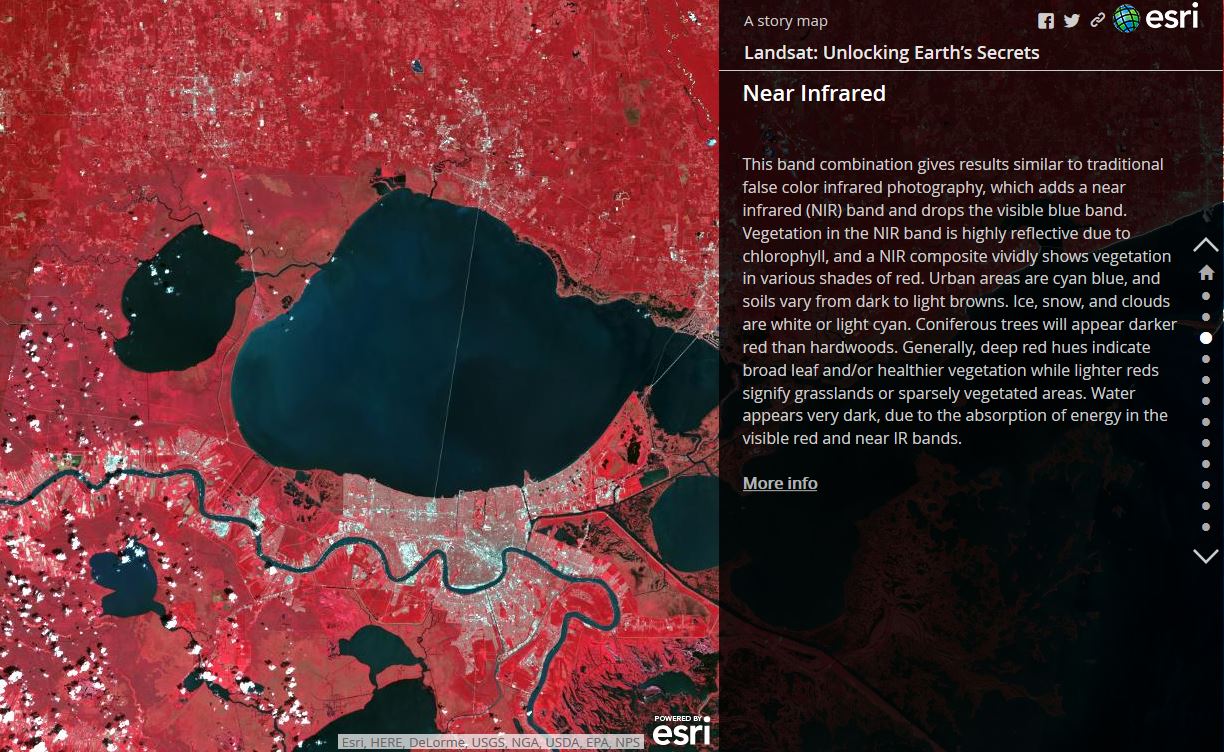 In operation since 1972, Landsat is the longest running program for acquiring satellite imagery of our Earth. It takes images of every location in the world to reveal Earth's secrets, from volcanic activity to urban sprawl. Landsat sees things on the electromagnetic spectrum, including what's invisible to the human eye. It takes images of every location on Earth once every 16 days, so we can see how places change over time. Landsat's work is epic in scale: in 43 years, it has amassed over a petabyte of data, with more than 4 million scenes and counting.

Esri Managed Cloud Services has achieved an agency Authorization to Operate at the moderate level from the US Census Bureau. Esri Managed Cloud Services is the first system to transition from Cloud Solution Provider Supplied Package to Agency FedRAMP Authorization. It satisfies the stringent security requirements that federal agencies must meet before operating in a cloud computing environment.

Prince George, BC-based Maptiks, which provides Web map analytics tools, will be launching its Esri integration to all enterprise customers. Maptiks joined the Esri Emerging Technology Program in September and has since been working closely with the Esri team to deploy the integration. Esri currently does not provide in-depth Web map analytics with key metrics on map activities and map performance – therefore, this Maptiks analytics integration will add value to Esri’s data-centric customers.

Smartphone users now have access to Field Notes—Earth, a free new mobile app from Esri that allows anyone to discover interesting facts about population, nature and physical landscapes for any location on Earth. Available for iPhone and Android, the app lets you pick a place, pick your profiles and get results about your place.

Improved delivery of 3D and other complex visualizations over the Web

Esri has made extensive efforts to expand the ArcGIS platform to support an enterprise workflow that includes data creation and management, visualization and analysis, and communication tools for technical and non-technical GIS users. With Portal for ArcGIS and ArcGIS Online, users are able to put powerful geospatial visualization, collaboration and communication capabilities into the hands of more users in their organizations than ever before. Esri is enabling customers to share 2D and 3D in standard, scalable formats that enable reuse of the same maps and scenes in multiple clients.

ArcGIS 10.3.1 for Server is now available on the Microsoft Azure cloud platform. It allows users to quickly deploy ArcGIS for Server applications and services to the Azure cloud rather than buying and maintaining the infrastructure themselves. ArcGIS Server on Microsoft Azure consists of Esri virtual machine images—essentially, virtual computers running in the cloud—and ArcGIS Server Cloud Builder, a free, lightweight desktop app that lets users configure and deploy ArcGIS Server sites from their desktops.

ArcGIS is an open platform. Esri takes this seriously because it means users’ data and systems are interoperable with other technologies. ArcGIS serves as an integral part of every organization. At its center is Web GIS, a way to open GIS access and benefits to everyone while creating connections within and across organizations. 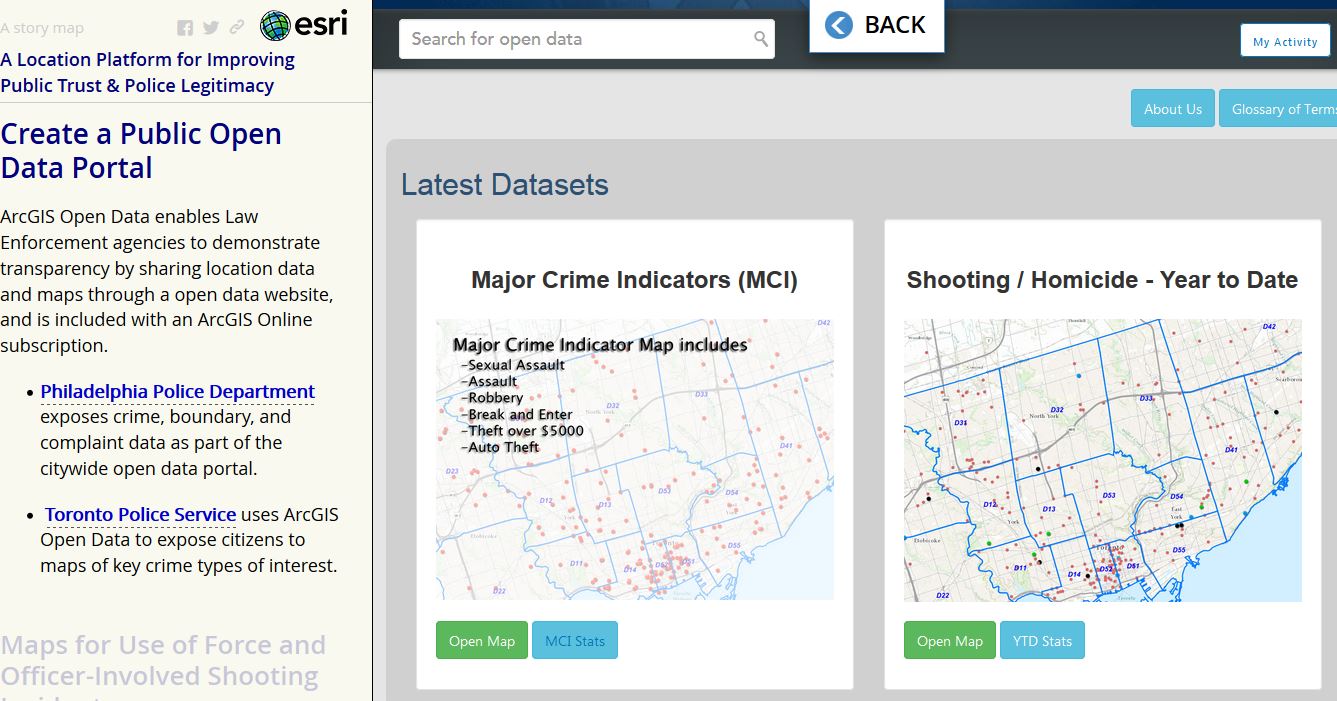 This story map shows how the ArcGIS platform helps law enforcement agencies to leverage their authoritative location data to improve public trust and police legitimacy within the communities they protect. Various cities across North America are featured, including the Toronto Police Service.

The 9th International Symposium on Digital Earth themed “Towards a One-World Vision for the Blue Planet” was held in Halifax, Nova Scotia in October 2015. About 300 delegates from 28 countries attended the event, which aims to spread the concept of Digital Earth, exchange Digital Earth-related technologies and promote relevant applications by providing an international platform for researchers, educators and enterprises to discuss and communicate.

Learn to work with video in ArcGIS

GISuser reported about an Esri live training seminar that introduced the concepts of Full Motion Video (FMV) and demonstrated how users can integrate and exploit video within ArcGIS. Video captured from unmanned aerial vehicles (UAVs) or other aircraft is an important data source, providing a view of how events unfold or how features change on the ground. ArcGIS FMV provides integrated workflows to view, manage, analyze and share video content, including live feeds.

The 21st edition of Intergeo was held in Stuttgart, Germany in September 2015. More than 16,500 visitors from 90 countries attended the event, which focused not only on collecting data, but also on processing and distributing it. A number of eye-catching developments related to the availability and accessibility of data were highlighted.