2015 marks the 100-year anniversary of the writing of John McCrae’s famous poem In Flanders Fields. Guelph, ON is the birthplace of the soldier, poet and doctor and the City of Guelph recently launched a story map to celebrate McCrae’s life and the poem. Read what inspired the story map’s creation and how three departments at the City collaborated to make it a success.

Two years ago, the City of Guelph began planning something special: an initiative to celebrate the 100th anniversary of John McCrae’s poem In Flanders Fields. Guelph marks the birthplace of the famous soldier, poet and doctor and the City wanted to ensure that, when the time came to commemorate the centenary of the poem, they would be ready.

Guided by a steering committee, the City planned and organized Flanders Fields at 100 Community Initiatives—a series of events and projects celebrating Mr. McCrae and his poem, which generations of Canadian school children have studied each fall. So far, initiatives have included a new permanent exhibition of McCrae’s life at McCrae House—a city-run museum—a juried art show of art inspired by the poem and a bronze statue erected at Guelph Civic Museum.

Another initiative of particular interest to GIS professionals is the 100 Years of In Flanders Fields Map Journal, which the City launched this past September. Developed by the City of Guelph’s Information Technology Services in partnership with Guelph Museums, the story map traces the history of McCrae’s life as well as the events that inspired the poem. 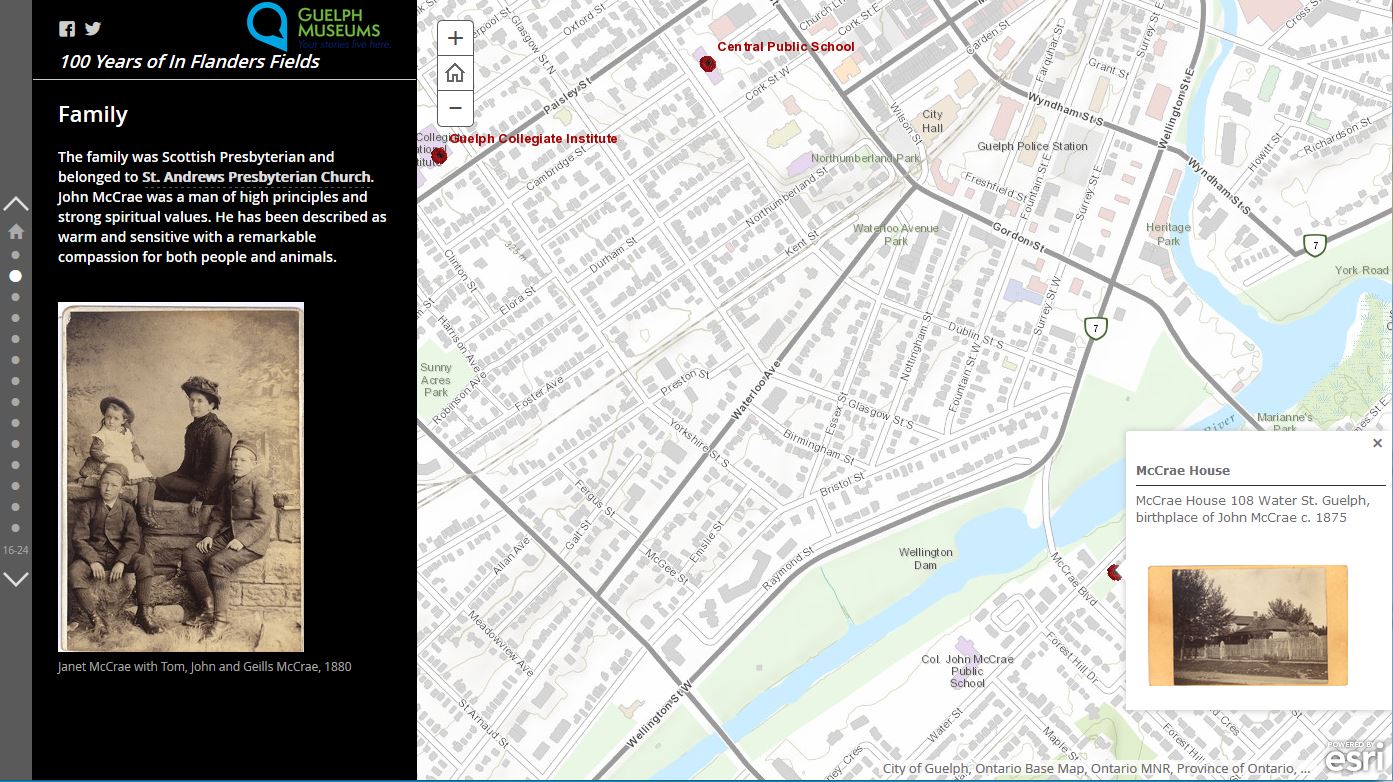 The ArcGIS Online-based app provides an insightful look at McCrae’s life, the origins of the poem and its legacy through an interactive, multi-media experience that includes historical maps, photos, a song and documentary films from the National Film Board of Canada. It also contains original, archived journals and sketches by Mr. McCrae and—perhaps the story map’s crown jewel—a version of the poem scrawled in McCrae’s handwriting dated 1915. 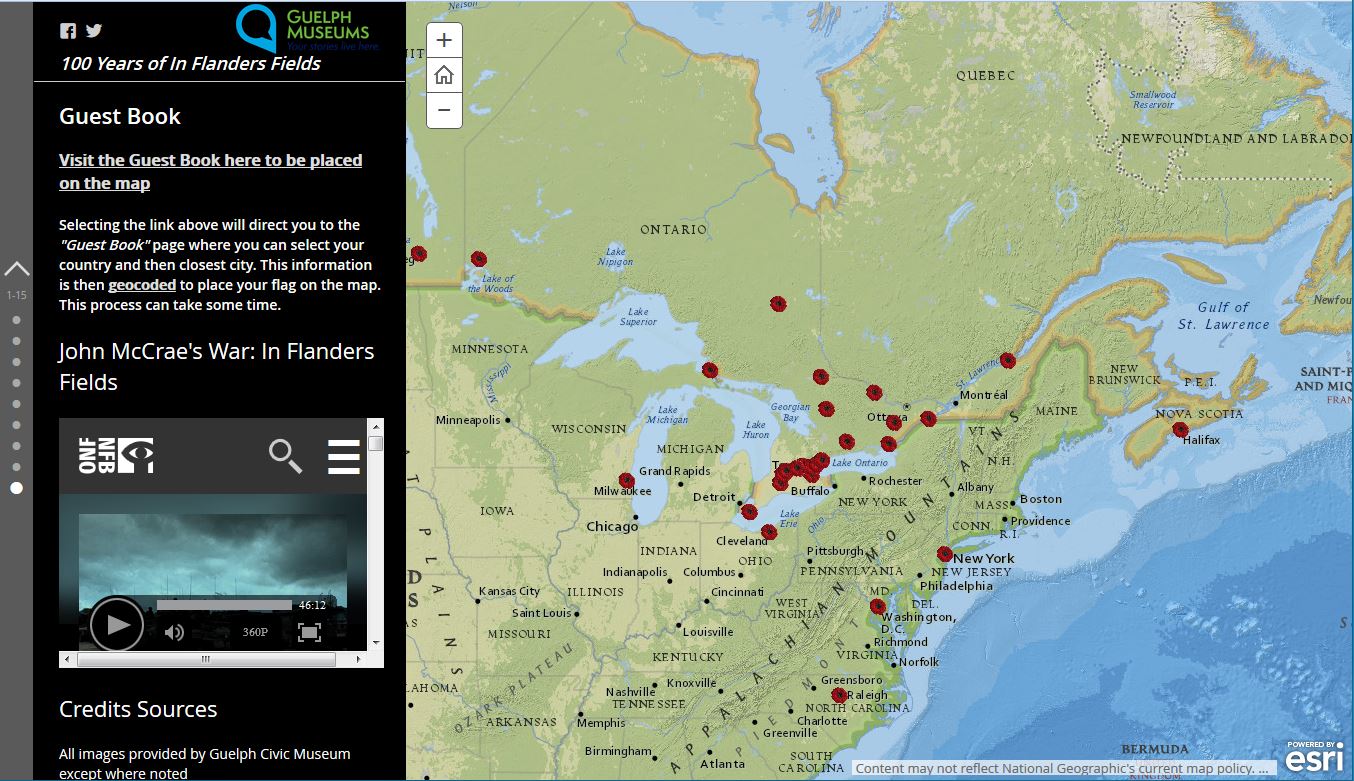 One section of the story map features an embedded documentary film and a new twist on the guest book concept.

The idea to launch the story map was sparked during the 2014 Esri Canada User Conference in Toronto. City staff attending the UC saw a story map demonstration and subsequently pitched colleagues in Guelph Museums and IT the idea of creating one to celebrate McCrae and his poem as part of the Flanders Fields at 100 initiative. Clearly, GIS staff were excited about the idea. Here’s a quote from Guelph Museums manager Tammy Adkin from the City’s press release announcing the launch of the story map:

“It is wonderful to see emerging technologies applied to advance understanding of history. The enthusiasm demonstrated by our colleagues in Information Technology Services, who initiated this project, was infectious.”

Not surprisingly, the idea quickly gained traction and, after considerable planning, GIS analysts, Guelph Museum staff and information technology professionals were collaborating in an interdepartmental effort to tell the story of the poem and its author using the app.

The City’s Enterprise License Agreement with Esri Canada allowed GIS staff to assign roles and groups in ArcGIS Online to internal staff involved in the project, which made creating, reviewing and editing easier. Guelph Museums staff weaved together an array of content to tell the story, GIS staff handled story map production and IT staff took care of backend and security requirements. Collaboration between GIS and IT staff during the story map’s development helped to define and fine tune server architecture and a network security model—both important components to successful GIS-based solutions in the future.

Since its launch on September 8th, the story map has received slightly over 3,000 unique views. After Remembrance Day, this number will no doubt jump even higher. The story map has also been profiled by CTV News, Global News and local media. The Flanders Fields at 100 Community Initiative has also been a success. One measure is a 47% increase in attendance at Guelph museums this year.

The popularity of this story map has inspired the City to develop more in the future to help promote historic sites and buildings and the community’s artists and studios. Other story maps are planned to communicate information to the public, including capital projects, parks and recreation and ground source water protection.