In this month’s SDI Snapshot, explore the GeoFoundation Exchange and how it’s modernizing Canada’s digital infrastructure, find out GeoAlliance Canada’s focus for its first fiscal year and read a report on Internet speed and quality across Canada.

Here’s a look at what’s happening in Canada and globally in the world of spatial data infrastructures (SDI). This May 2016 post is a collection of the latest and most significant SDI news, data and products.

Esri Canada has released the Alberta Wildfires Swipe Map that uses satellite imagery taken before and after the recent wildfires that swept through Fort McMurray, Alberta, in May. The map shows the path and extent of the devastation it has caused. As well, Esri Canada has released the Fort McMurray Wildfires Public Information App, which shows live data on the wildfires, as well as related geotagged social media content, traffic and weather information.

Basemap data, which is a critical component of Canada’s SDI, requires modernization and a new approach to unify the disparate efforts of various agencies that manage authoritative basemap data across Canada. The GeoFoundation Exchange (GFX) initiative presents a unique opportunity for Canada to leverage modern technologies, collaborative approaches and open data policies to streamline the nation’s basemapping processes, drive down current mapping costs and improve basemap products and services for the benefit of all Canadians.

The Canadian Radio-television and Telecommunications Commission (CRTC) is currently holding hearings on the topic of reliable, affordable broadband Internet. For the majority of Canadians, access to broadband is not an issue. However, for many, especially in rural and northern areas, access and affordability is a big issue. OneWeb, a global satellite Internet company, explained the key technical issues and provided some suggestions on how the government might want to move forward.

GeoAlliance Canada has announced that for the 2016-2017 fiscal year, their focus will be on projects that build a stronger geomatics sector identity, improve educational resources and increase access to geospatial data. These three project themes were drawn from the recent work of the Canadian Geomatics Community Round Table (CGCRT) and refined at Map to the Future 2016.

The Canadian Internet Registration Authority (CIRA) has released a new report that breaks down the speed and quality of the country’s national, provincial and municipal Internet connections–and to put it lightly, we can do better. To start with, the average Canadian’s download speed is 18.64 Mbps, well below the 25 Mbps cited by CIRA as an industry ideal.

To celebrate Earth Day, Ontario partnered with the Government of Canada on a new soil mapping initiative that will contribute to the growing understanding of how land use patterns have changed by using new and up-to-date technologies. With an investment of $5.1 million, the new data collected by this initiative will help farmers adjust their management practices by providing data to support agricultural and environmental initiatives; contributing information to support climate change mitigation and adaption efforts; and further protecting the quality of Ontario's lakes, rivers and streams.

CanVec is a digital cartographic product that offers quality topographical information in vector format in compliance with international geomatics standards. This new CanVec update is the result of an improved data model with the goal of providing a seamless data layer coverage across Canada. Currently, only Atlas data, the National Road Network (NRN) and the National Railway Network (NRWN) are available seamlessly. Future releases will include additional seamless data layers.

Because environmental issues take place in specific locations and often exhibit specific spatial patterns, they can be better understood through maps. Map-based analysis helps people question, visualize, assess and interpret data to understand our complex and ever-changing world. The maps created from GIS are increasingly easy to access and use online and on mobile devices. Maps are being used to understand the major issues of our time, such as impacts of global climate change and green sustainability. These maps are increasingly able to incorporate real-time data, such as wildfires, streamflow, weather and traffic.

MapML: a text format for encoding map information for the World Wide Web.

The objective of the Map Markup Language (MapML) is to allow web-based user agent software (browsers and others) to interact with web servers. This is done by relying only on publicly defined web standards (URI, HTTP, this specification), and not on URL recipes/templates, with the goal of displaying modern interactive web maps. See an example of MapML displaying the Esri Arctic Ocean Basemap.

The 4.x series represents a brand new edition of the JavaScript API that Esri is launching alongside the 3.x series. The goal of the 4.x series is to reimagine the API in terms of its support for both 2D and 3D, its ease of use as a JavaScript API, its ability to work with map and layer web resources stored as items in the ArcGIS geoinformation model, and its support for building engaging and elegant user experiences 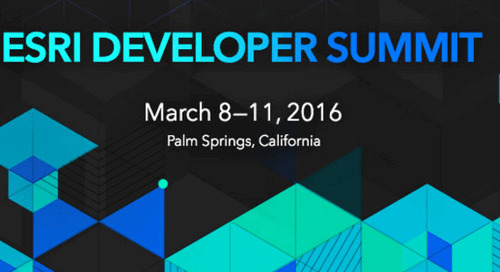 Get a recap of the Canadian Open Data Summit 2016, the Esri DevSummit and first GIS and Policy event, and l... 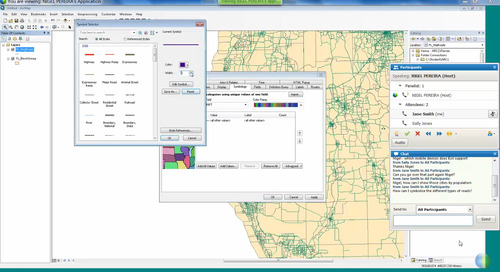 Esri Canada’s instructor-led online training is an ideal way for you to brush up on skills and learn new Ar...