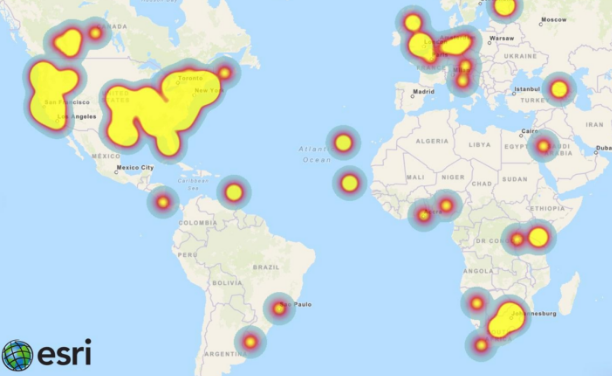 A sample heatmap of power outages across the world

DataCapable has announced the world’s first Global Outage Tracker, which is available in Esri’s ArcGIS Marketplace. By leveraging the power of machine learning, industries across Canada and the planet can benefit from a real-time layer of global power outages.

With the largest release of data to date, the Polar Geospatial Center (PGC) has significantly expanded the high-resolution coverage of the Arctic Elevation dataset. The dataset provides two-, five-, and eight-meter elevation for land north of 60°N. Canadian content includes the Yukon, Northwest Territories and Nunavut.

Esri recently announced that it has received over 30 compliance certificates from the Open Geospatial Consortium, Inc. (OGC), for its ArcGIS 10.5 platform. These certificates of compliance cover a wide variety of OGC implementation standards, which allow customers, especially within the geospatial intelligence (GEOINT) community, to work more collaboratively.

Bilingual apps are essential for many Canadian government websites. Plus, offering your web app in multiple languages can increase your audience and the overall impact of the information. See this blog to see two examples of configuring apps to support a bilingual audience.

Alberta Data Partnerships and SensorUp have teamed up to make Alberta’s environmental data easier to access. The two are creating an Environmental Data Exchange Node (EDEN) that will combine disparate environmental monitoring data throughout the province, in a single portal.

Many cities want to open up their data but are not too sure where to start. To support these efforts, Open North and the Government of Canada have piloted the development of a do-it-yourself (DIY) open data toolkit for municipalities.

GoGeomatics has compiled a list of open data geospatial resources for Canada.  The list does not represent all the open data resources in Canada, but simply the ones they have located or have been made aware of.

For the last twenty years, one of the fundamental preoccupations of the spatial industry has been the creation of an SDI. It’s not hard to see why. Spatial data is expensive to collect so it needs to be used efficiently. But looking into the future, people in the industry are starting to worry that an SDI is not enough to extract the full value from the data.

Confused about conflation? Let’s clean up the mess.

When you have two conflicting (or similar but different) data sets, conflation resolves any conflicts by selecting the most appropriate data. For example, different organizations such as provincial and municipal governments collect data. This data may be for the same area and feature, but it was collected at different scales, accuracies and dates. A conflation process helps make one resulting data set from these two initial datasets.

ArcScene and ArcGlobe are both part of the ArcGIS family of GIS software. Instead of 2D viewing that users are accustomed to in ArcMap, ArcScene and ArcGlobe both specialize in 3D visualization. With a 3D Analyst extension, these 3D GIS programs can display neat 3D effects. But how are they different from each other?

Most consumer-facing web basemaps are delivered in the Web Mercator geographic coordinate system (GCS), which has now become the de facto standard for web maps. However, the defense, intelligence and other communities, have a requirement to use maps in the WGS84 GCS.  To support these organizations and other use cases, Esri is introducing a new set of vector basemaps that are delivered in WGS84 GCS.