What’s the economic impact of open data? Why does Gartner predict that a no-cloud policy will become extinct? Where in Canada will Amazon Web Services open an AWS region? Find out these and more in this month’s SDI Snapshot.

Here’s a look at what’s happening in Canada and globally in the world of Spatial Data Infrastructure (SDI). This February 2016 post is a collection of the latest and most significant SDI news, products, data and resources.

The economic impact of open data: what do we already know? 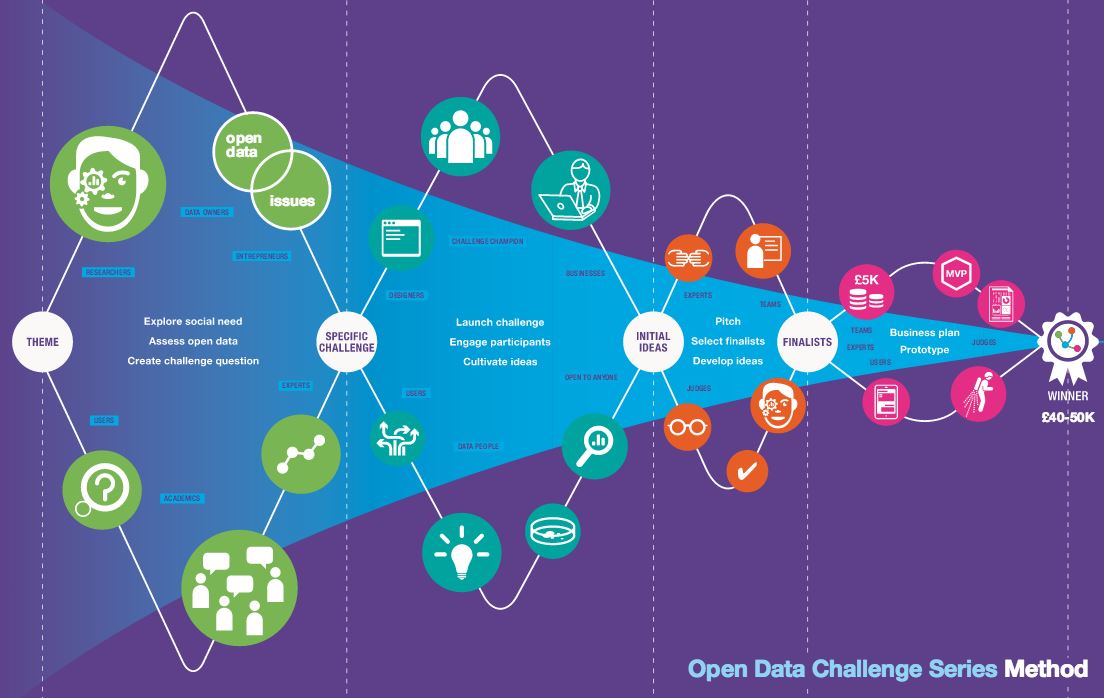 Open data fuels economic growth. Many believe in the theory and ask for the proof. A new report by Nesta and the Open Data Institute adds to the evidence of the impact of open data. The report’s analysis examines the effects of the Open Data Challenge Series method (above) and predicts that the program will result in a potential 10x return over three years, generating millions of pounds for the UK economy.

Gartner predicts why a no-cloud policy will become extinct

Think about all the things that businesses previously did, but don’t do today thanks to advances in technology. Think about your paycheck and directory assistance. Gartner indicates that in the not-too-distant future, banning cloud applications from the workplace will join the list of quaint throwback practices. Gartner analysts who cover cloud computing predict that by 2020, a corporate ‘no-cloud’ policy will be as rare as a ‘no-Internet’ policy is today.

US President Obama’s FY2016 budget request for the US Geological Survey is $1.2 billion, an increase of nearly $150 million above the FY2015 enacted level. The FY2016 budget reflects the vital role the USGS plays in advancing the President’s ongoing commitment to scientific discovery and innovation to support a robust economy, sustainable economic growth, natural resource management and science-based decision-making for critical societal needs. The budget request includes increases that ensure the USGS is at the leading edge of Earth sciences research.

In the works – AWS region in Canada

Amazon Web Services (AWS) recently announced that it will be opening an AWS region in Montréal, Québec, in the coming year. This region will be carbon-neutral and powered almost entirely by clean, renewable hydro power. The planned region in Montréal will give AWS partners and customers the ability to run their workloads and store their data in Canada. As a reminder, AWS currently has 4 other regions in North America, plus a planned but not yet operational region coming to Ohio in 2016. 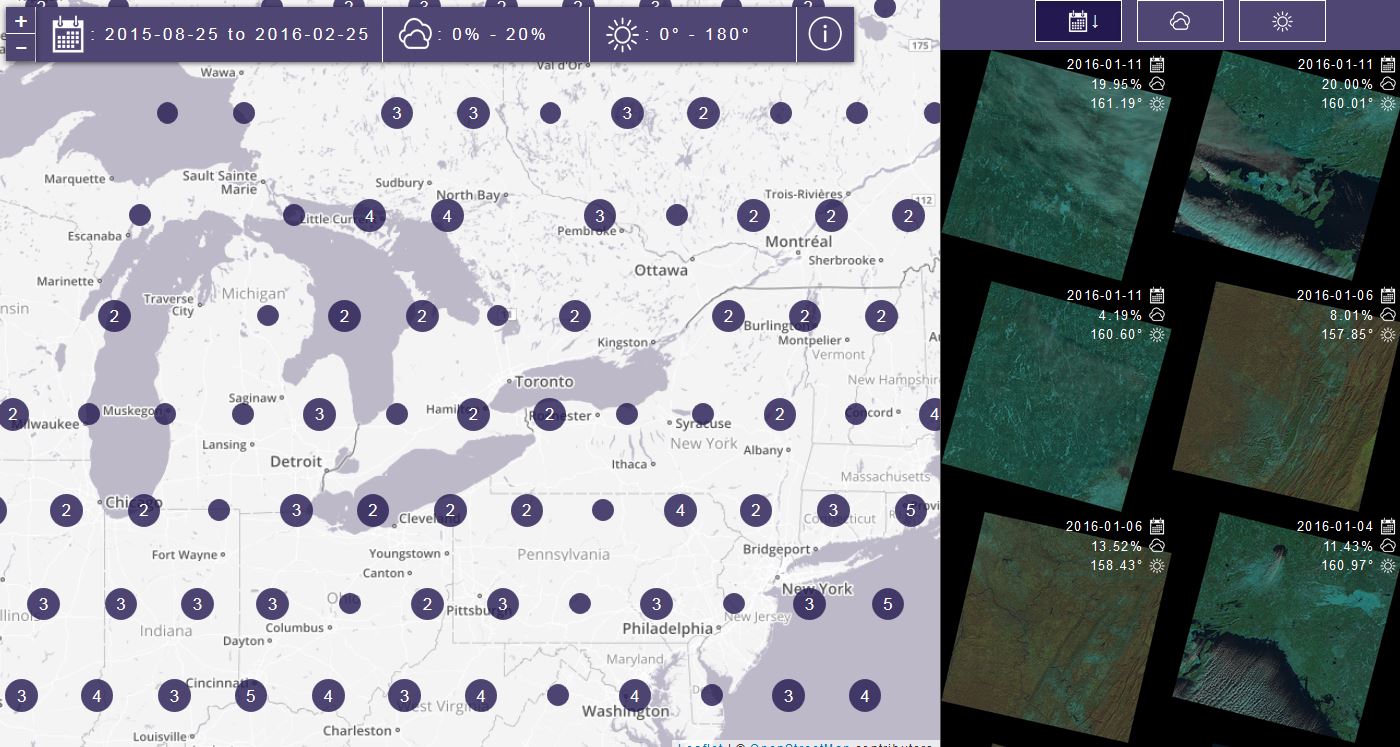 The Landsat program is the longest running series of acquisition imagery-based satellites. Recently a new Landsat satellite was launched (Landsat 8), to help obtain further valuable imagery to be used in geomatics, agriculture, forestry, research, education and other industries. Both Landsat 7 and 8 provide images from the visible spectrum as well as near-infrared, mid-infrared and thermal-infrared bands. Canadian Landsat data can be downloaded at no cost through this Landsat viewer.

7 ways local governments are getting creative with data mapping

Local government entities are using maps more and more as a tool for creating useful applications. Not only large cities, but small-population cities and towns are exploring ways to use maps. This is because the technology has become much faster, making it possible to create online interactive mapping applications that give users information in real time or near-real time. Another reason is the open data movement. As government data collection expands, and as more of that data becomes publicly available, more people are looking to maps as a means of expressing the information.

Prepare now for the IoT revolution

The total volume of data from connected devices is expected reach 1.6 zettabytes by 2020. From smart traffic management to industrial plants, the Internet of Things (IoT) is opening the door to a deluge of data that enterprises must manage. Tremendous value will come from analyzing the data to gain understanding and make better and faster business decisions. Much like the market for “big data” analytics–machine-learning, predictive and real time–the IoT industry is poised for a data revolution.

Globe and Mail recently published an article about a young Calgary man who was charged after allegedly flying a drone too close to the airport. As the use of unmanned aerial vehicles (UAV) in real estate, mining, oil and gas, agriculture and environmental and road surveying booms, there is a push to create a special airspace for training operators in beyond-the-line-of-sight drone flights. The article answers five questions with a focus on safe drone operation.

Are we in an era of infrastructure as the leading geospatial application?

The geospatial technology industry rests on a number of different leading application areas that ebb and flow in terms of their level of investment. Some of the market surges in the past were driven by technological breakthroughs; others were due to federal spending, the emergence of a large market need or a combination of the above. The market has moved (in no particular order) from forestry to utilities to municipal governance to security/intelligence and infrastructure. Many different market indicators now point to infrastructure as the next major market for investment and geospatial innovation.

Getting to know ArcGIS Earth 1.0

Esri recently launched ArcGIS Earth, an interactive globe viewer that helps users explore any part of the world and work with 3D and 2D map data including KML, shapefiles and Esri RESTful services. Users can display data on the globe, sketch placemarks, measure distances and areas, and add annotations so they can easily understand spatial data.