If you are an Esri technology user, you must have attended a User Conference (UC) sometime, somewhere – whether it’s the international UC in San Diego or one of the 16 UCs in Canada. After all, it’s that one place where you get to meet GIS professionals, academics and solution vendors who share the same pains and gains – the joy and excitement of a new project, a high-performing app, a popular story map, successful implementations, recognitions and awards, and that nirvana moment when you realize that you contributed to making this world a better place. It is indeed a mix of emotions at these User Conferences!

The UCs are also the place to learn about new developments, new products and gather fresh innovative ideas. When Steve Czajka, Data + Visualization Studio manager at the City of Mississauga, attended the Esri International User Conference in San Diego in 2015, he found ideas to take back home and leverage their GIS investment.

“At the User Conference, I was able to see what other cities were achieving with the Collector for ArcGIS and Operations Dashboard applications. Meeting with other GIS professionals inspired me and got me thinking about using this mobile technology for our Mississauga Employment Survey,” Czajka recalls.

To meet the growing demand for accurate employment and business trends information by municipal land-use planners, economic developers, real-estate groups, corporate investors and others, municipalities in the Greater Toronto Area (GTA) conduct employment surveys regularly – either annually or every two years. The City of Mississauga has been conducting these surveys yearly for almost two decades now.

Mississauga ranked 1st in terms of business friendliness in the 2017/2018 American Cities of the Future report by FDi, a division of the Financial Times. The City is home to 73 of the Fortune 500 companies. A total of 88,653 businesses thrive in Mississauga, including Microsoft, Ericsson and FedEx, who have established their national headquarters here. With a flourishing marketplace and new businesses springing up every day, City officials have to stay on their toes to keep pace with global innovation and technology and provide municipal-level support to economic and entrepreneurial activity.

In 2009, as part of the Moving Forward Strategy Plan, the Information Planning team proposed a project to modernize the City’s Employment Survey. While Mississauga had already established a vision for a Data + Visualization Studio and invested in GIS, there was a lot of learning required about the countless ways that the technology could be used for digital transformation, operational excellence and efficient decision-making in a municipality.

The Mississauga Employment Survey is an important activity for the department of Planning and Building (P&B). It collects pertinent information such as business names, contact information, location and the number of full-time and part-time staff at each business. Through the years, producing the annual Employment Survey has involved making phone calls and field visits, and mailing out almost 2500 survey forms to individual businesses.

While a call company is retained to work with larger and complex businesses, the department hires four students each summer to conduct interviews in Mississauga. Data from previous years, building permit database and Statistics Canada serve as a foundation, and the department further builds upon it.

Using ArcGIS to modernize the survey

In 2014, the City invested in Esri’s ArcGIS Desktop software, which also included a subscription to ArcGIS Online, Esri’s complete software-as-a-service mapping platform. At the time, the IT division was building its open data portal.

With ArcGIS Online, the GIS specialists started experimenting with Esri Story Maps. As they learned more about the different apps, they landed on Collector for ArcGIS. Within no time, they also honed their skills in using Operations Dashboard for collaboration and real-time monitoring.

Czajka knew then that GIS had opened a new world of possibilities for the City. However, it wasn’t until he attended the Esri International UC in 2015 that he found the solutions that would make the modernization of the Mississauga Employment Survey a reality.  Czajka says, “Discussing the products [Collector and Operations Dashboard] with other GIS professionals who have already been using the applications is what gave me the confidence to recommend this to our city.”

In the summer of 2016, the City Planning Strategies Division conducted a two-week pilot to test Collector on almost 700 survey records. While the success was evident from the pilot results, Irena Rostkowska, survey coordinator at the City of Mississauga, knew very well that a little training could go a long way in further saving time and money for their department. So, she invited an Esri Canada Professional Services consultant to help train their team and optimize their use of the ArcGIS applications.

The two-day workshop combined a basic introduction to Collector and Operations Dashboard with a number of different configurations required for setting up data sources, software and more. The Professional Services consultant helped them review tools for importing data and how to use them, as well as how to complete data migration from City resources and set up procedures for importing future data from Microsoft Excel.

On the benefits of hiring Professional Services, Rostkowska notes, “It was a matter of handling 25,000 records, and we knew that getting some professional consulting services will help us save field time on each of those records. When you add that up, it’s a lot of savings. Esri Canada’s Professional Services consultant was helpful in making the overall transition from print to digital surveys easy.”

For the 2017 Employment Survey, the division again hired four co-op students who were trained on the new system and sent out in the field during the summer to interview businesses and complete the survey.

With Collector for ArcGIS, planning routes and navigating survey areas became easier as interviewers had access to information from previous years already stored in the system. This allowed them to update employment data on the spot – using dropdown lists, record sorting and search functions in the application. Field monitoring also improved significantly. The supervisor could easily track field staff and monitor all survey activities via a browser application that provided real-time views. By regularly monitoring and assessing the progress of the Employment Survey, everyone could contribute more productively to its completion. 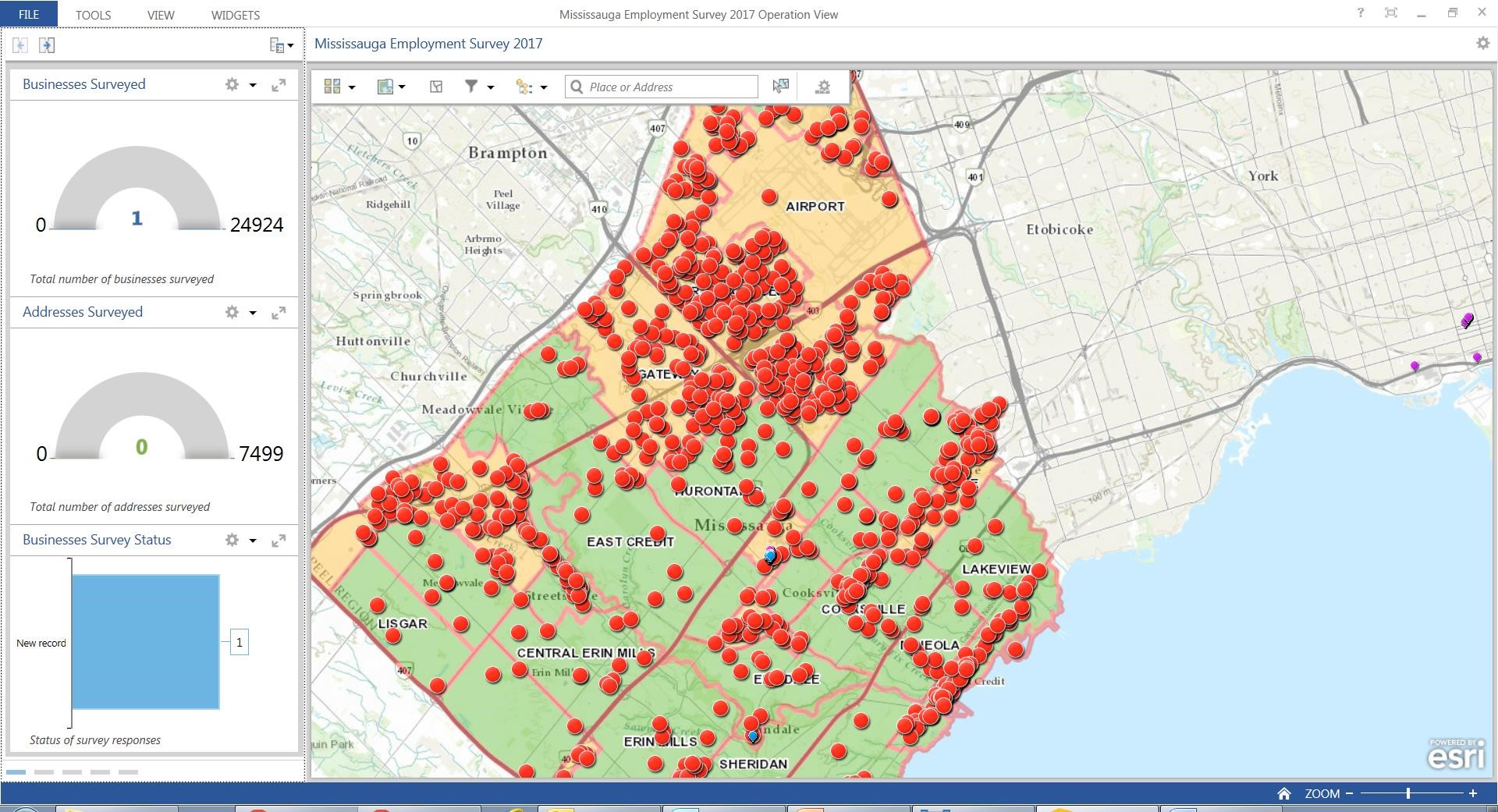 Through Operations Dashboard for ArcGIS, the City of Mississauga had a clear view of all the local businesses they needed to survey during the summer of 2017. 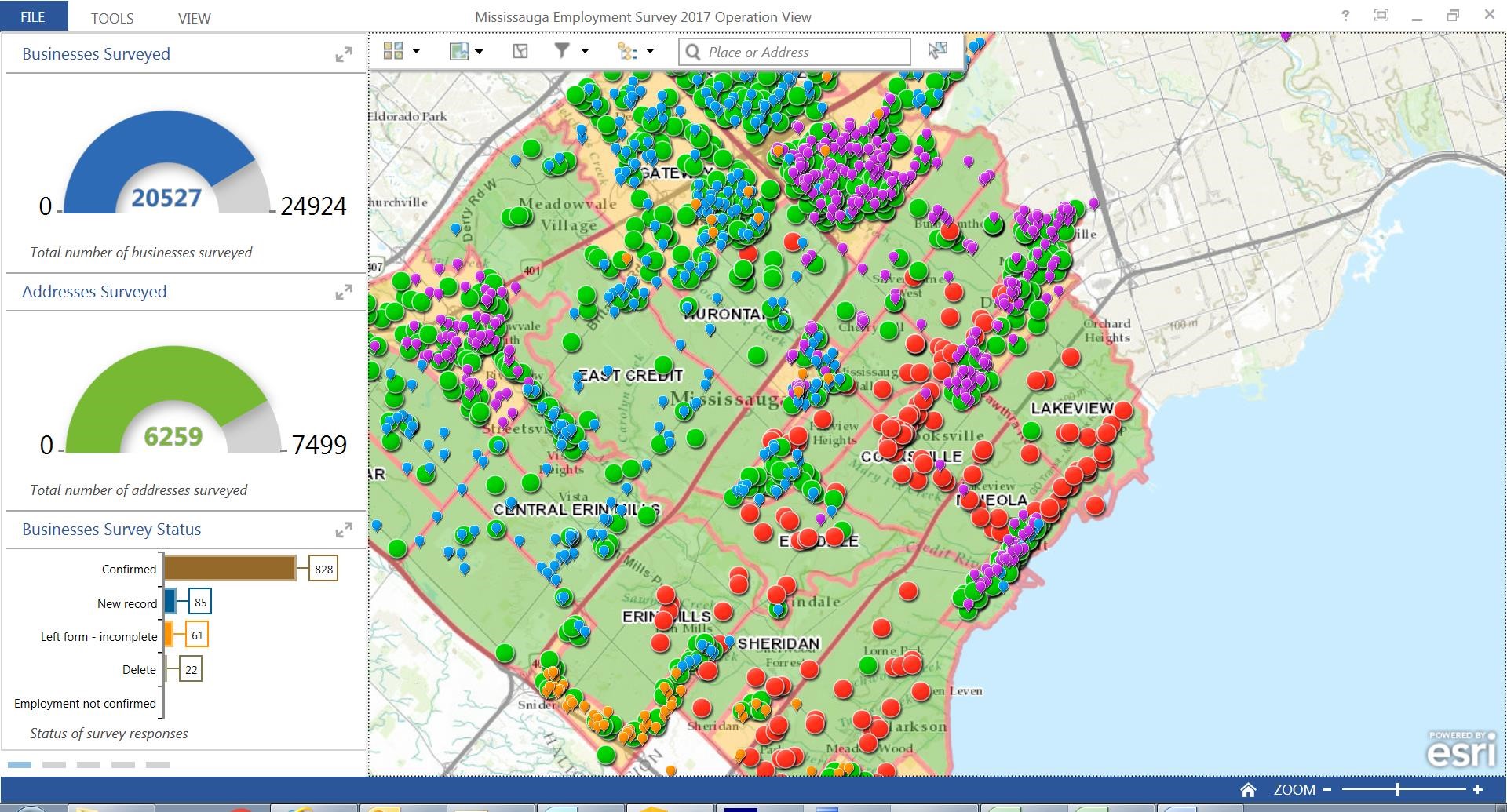 Monitoring survey operations was easy with the dashboard application. At a glance, the City could quickly tell how many businesses and addresses had already been surveyed. 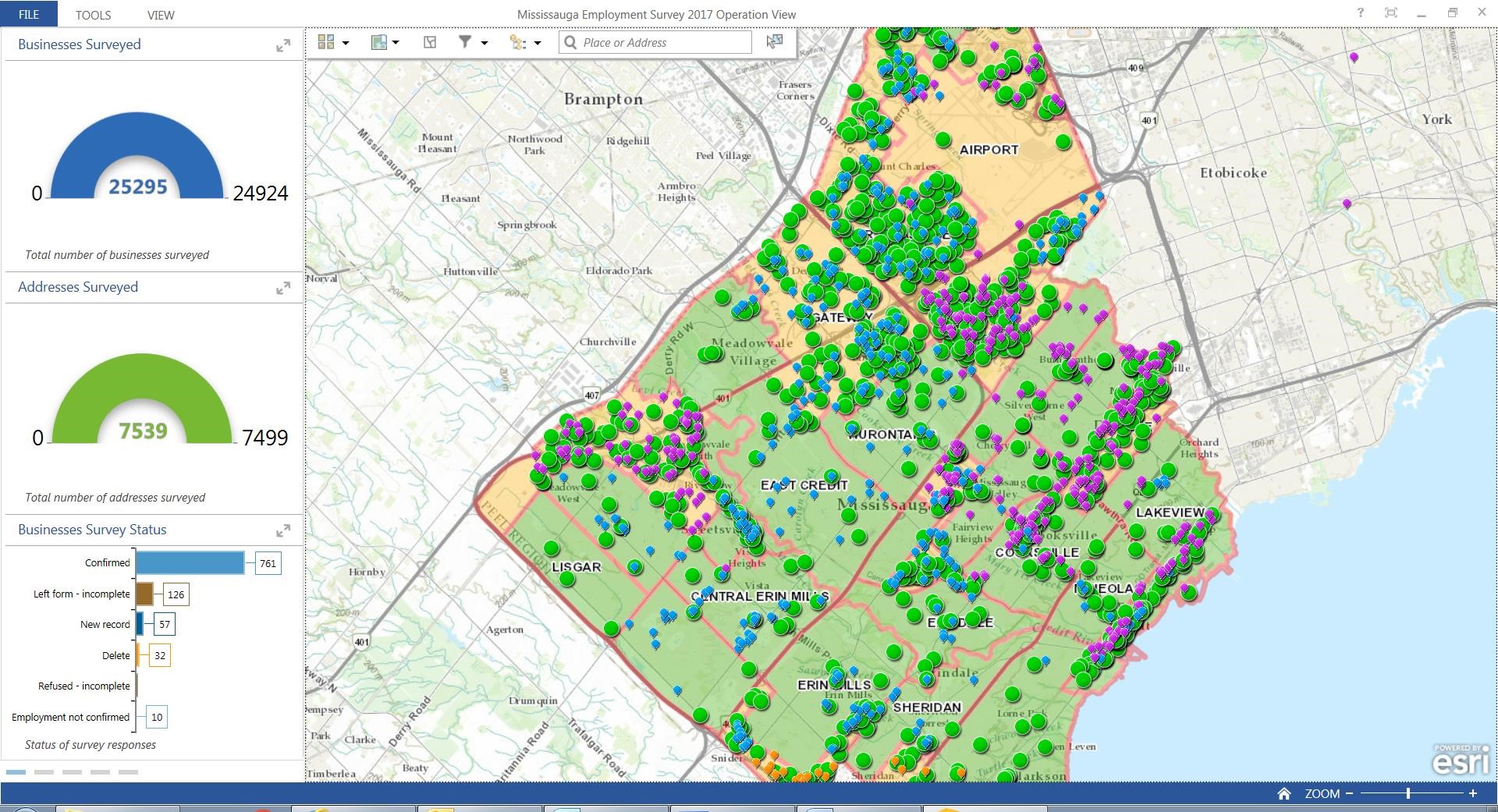 Using Collector and Operations Dashboard, the City completed nearly 25,000 surveys in 2017 faster than in previous years.

To the division’s surprise, the co-op students completed the survey in much less time than before, saving almost 420 work hours that led to economic savings. Not only did the new system save time and money, it was also more accurate as data was entered into the system directly. Data collection as well as management both became easier and more effective. Using Collector for ArcGIS and Operations Dashboard helped eliminate many cumbersome steps, such as printing survey forms and mailing out 2500 letters, searching for businesses and preparing driving routes, entering data manually into databases and making follow-up calls.

As part of its overall digital transformation, Mississauga had been looking to migrate from a legacy database program to a more sophisticated one. And the City found the solution in ArcGIS.

In one brand report, the City of Mississauga states: “The role of a place brand is to guide the way the city inspires, acts, engages and delivers its experiences to new and current residents, employers, investors and visitors.” In modernizing the Employment Survey, the City is definitely supporting and complementing efforts to recruit and attract investment, businesses and talent in many ways.

When talking about the benefits of using state-of-the-art GIS technology, Czajka observed how the digitalized process of field data collection enhanced the City’s brand among the business community. As part of the project, each interviewer was equipped with a mobile device to complete the survey with business owners. The interviewers noted that the upgrade in technology and replacement of paper survey forms with electronic devices were acknowledged by business owners and their staff as a sign of City’s digital maturity. The technological upgrade made the interviewers appear more professional and trustworthy, which encouraged businesses to volunteer their information more readily. The entire process helped elevate Mississauga’s profile as a progressive organization that embraces technology.

As the City moves toward a brighter future, it plans to continue building and implementing a robust GIS strategy. Its stakeholders are now accessing data online and they are requesting for more maps instead of spreadsheets. In addition to modernizing the City’s employment survey, Steve Czajka and Irena Rostkowska’s team at the Data + Visualization Studio is also streamlining business operations including the LEAN project, and collaborating with the Economic Development Office on other GIS projects. While it may seem that they have their work cut out for them, completing these projects has become less daunting with the help of GIS technology and services.