July’s App of the Month features a story map created by EntertainMaps.com founder Mark Gallant that explores features, events and places in old Ottawa. Learn about the story map and what inspires Mark to create his growing gallery of dynamic, engaging GIS-based apps... in his free time.

If a Canadian story map all-star team is ever assembled, Mark Gallant would most certainly be in the lineup. The EntertainMaps.com founder has been churning out a steady stream of compelling, so-good-it-looks-easy story maps since the popular ArcGIS Online apps were released. In addition to being selected as July’s App of the Month winner for Old Ottawa: A Capital Uncovered, Mark was also honoured with a second place finish in the 2015 Esri Storytelling with Maps Contest Culture/History/Events category for another story map that explores the rich history of Canada’s capital.

I spoke with Mark to learn what inspired him to start EntertainMaps.com, the process he undertook to create the Old Ottawa story map, tips for first-time story mappers and more. 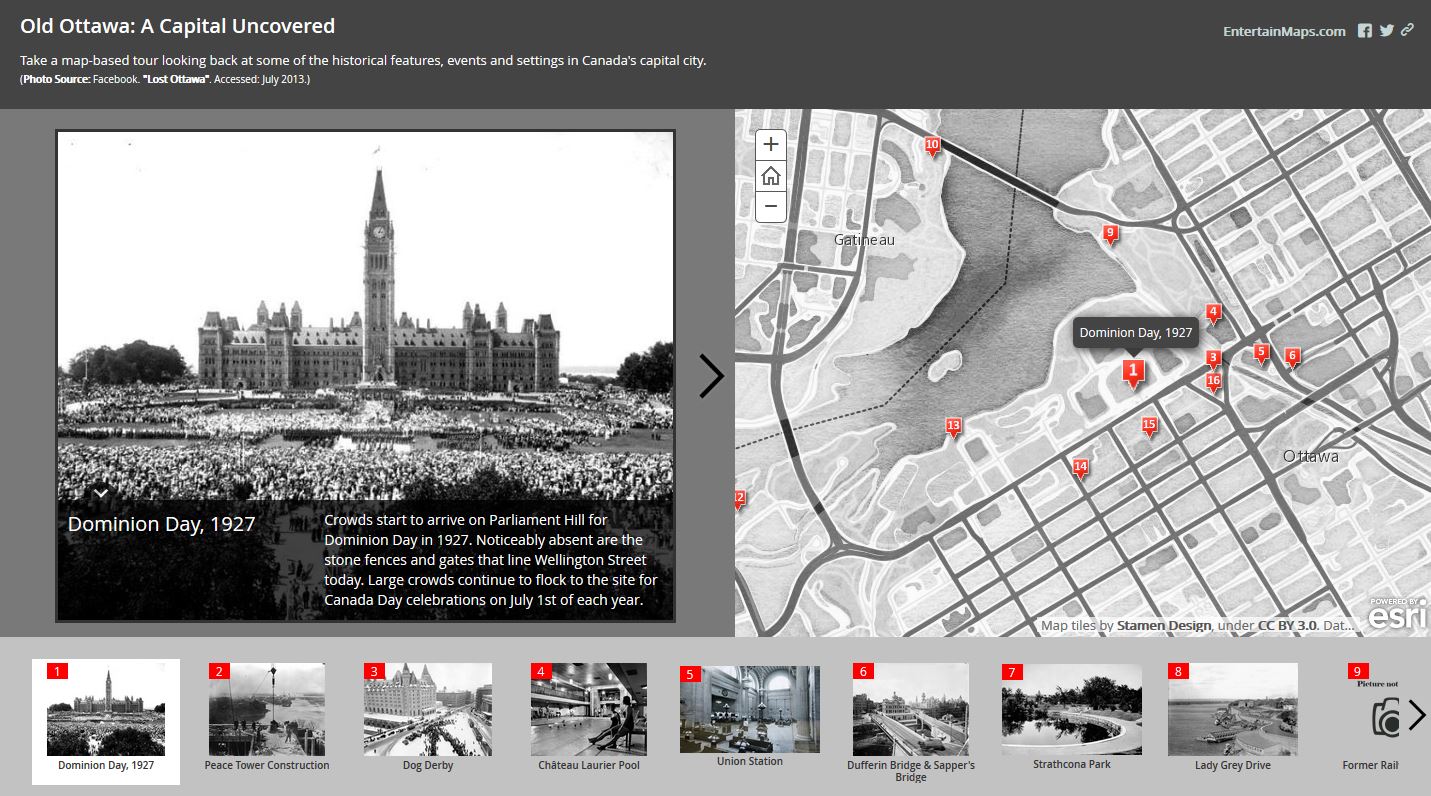 July’s App of the Month, Old Ottawa: A Capital Uncovered, contextualizes historical photos of features, events and settings on a map of Canada’s capital.

AB: You currently work as a GIS professional within the federal government, so EntertainMaps.com is something you do in your spare time as a hobby. What inspired you to start this venture?
MG: My goal is pretty simple: I want to promote geographic understanding and reach new audiences that aren’t normally exposed to geography. I started working with ArcGIS Online a few years ago when it was launched to keep my web GIS skills sharp, and then once I realized I had built over 20 apps I decided to assemble them in a gallery and give it a domain name. 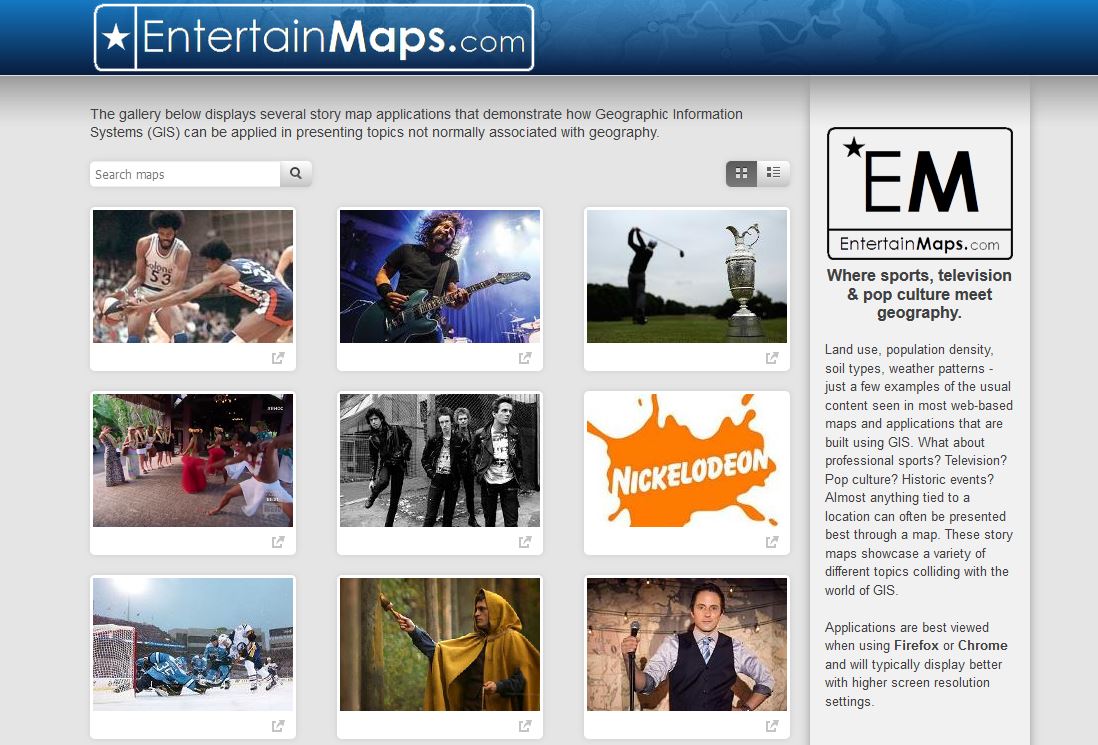 Mark’s EntertainMaps website features story maps that explore a variety of popular culture topics, including  Off to the Races: NASCAR's Biggest Tracks, Jurassic Park: Lights, Camera, Hawaii! and Seinfeld: A Map About Nothing.

AB: Why did you feel that pop culture would be a good fit for your work to engage people in geography and GIS?
MG: I find GIS is often used to present subjects like land use or weather patterns— things that fall within the traditional focus of geography, which I don’t think capture the interest of the general public. So I go for topics that are outside the norm that people will recognize on the maps on my website. Also, I look at enough traditional geography stuff at work throughout the day, so when I’m at home, I’d rather spend time on something different.

AB: It sounds as though one of the goals of your project is to help promote the benefits of GIS to a non-traditional audience.
MG: Yes, that’s right.

AB: Why is that important to you?
MG: I think that sometimes people don’t look at things in a spatial sense. For example, when I see historical photos, people often just present the photo; they don’t show where it is. The goal of my project is to place things like photos and videos in a spatial context. This way, they’re learning the what and the where. To put this in context for a project like the Old Ottawa story map, people can make a connection with an old photo and the street they walk on everyday.

AB: How do you go about picking the topics of your story maps?
MG: I have five questions that I ask myself before starting. Is location relevant to the story? Is there a variety of places or features? Is good quality media available? Can things be explained in a simple manner? Would somebody other than me be interested in viewing it? If the answer to all these questions is “yes”, then I’m likely to pursue it as a topic.

AB: Why did you choose to use Esri’s story map templates as the starting point for your apps?
MG: First off, they’re very easy to use. The maps are hosted online, so I don’t have to get into web hosting. They’re constantly enhanced as they consume quarterly updates from ArcGIS Online. Also, story maps are built with responsive design, so I don’t need to make multiple designs for mobile. Finally, because they’re easy and straightforward, I believe they effectively help the presentation of my topics. 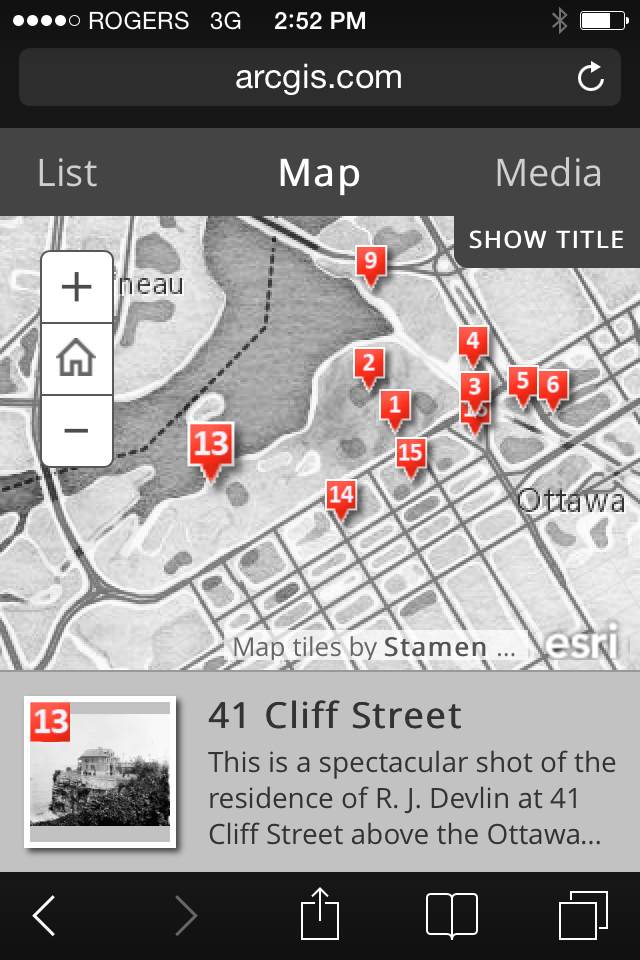 The Old Ottawa app displayed on an iPhone.

AB: Your story maps are characterized by a clean, simple appearance and intuitive functionality. How did you develop your story map skills?
MG: When I first saw ArcGIS Online, I thought it had enormous potential to help GIS grow in the web environment and with presentation techniques. So I spent a lot of time learning ArcGIS Online because it was new; it didn’t even exist when I was in university. I enhanced my skills building story maps by adhering to a strict set of limitations, such as keeping it simple and not presenting more than 20 points on a map.

AB: Moving to the Old Ottawa: Capital Uncovered story map. What led you to create this app? Are you a history buff?
MG: I wouldn’t say I’m a history buff—I would say I’m more of an Ottawa buff. I’m from Ottawa. I’ve only ever lived in Ottawa. I studied geography here and I was always paying attention to the layout and design of the city for many years. I’ve always been interested in how the city has evolved over time.

I first saw the photos presented in the story map featured in a news article about Lost Ottawa, a Facebook research community. I visited their page and began sorting through the photos. I thought if I could pick enough photos of locations in Ottawa that look different than what’s there today, I would really have something that would lend itself to a story map.

AB: Why did you choose the Story Map Tour template for this particular tour?
MG: I think that the map tour template is probably the best for a sequential presentation of points of interest or different places. It also limits how text is displayed so the reader isn’t spending too much time reading at different points, which I thought would be appropriate for this topic. 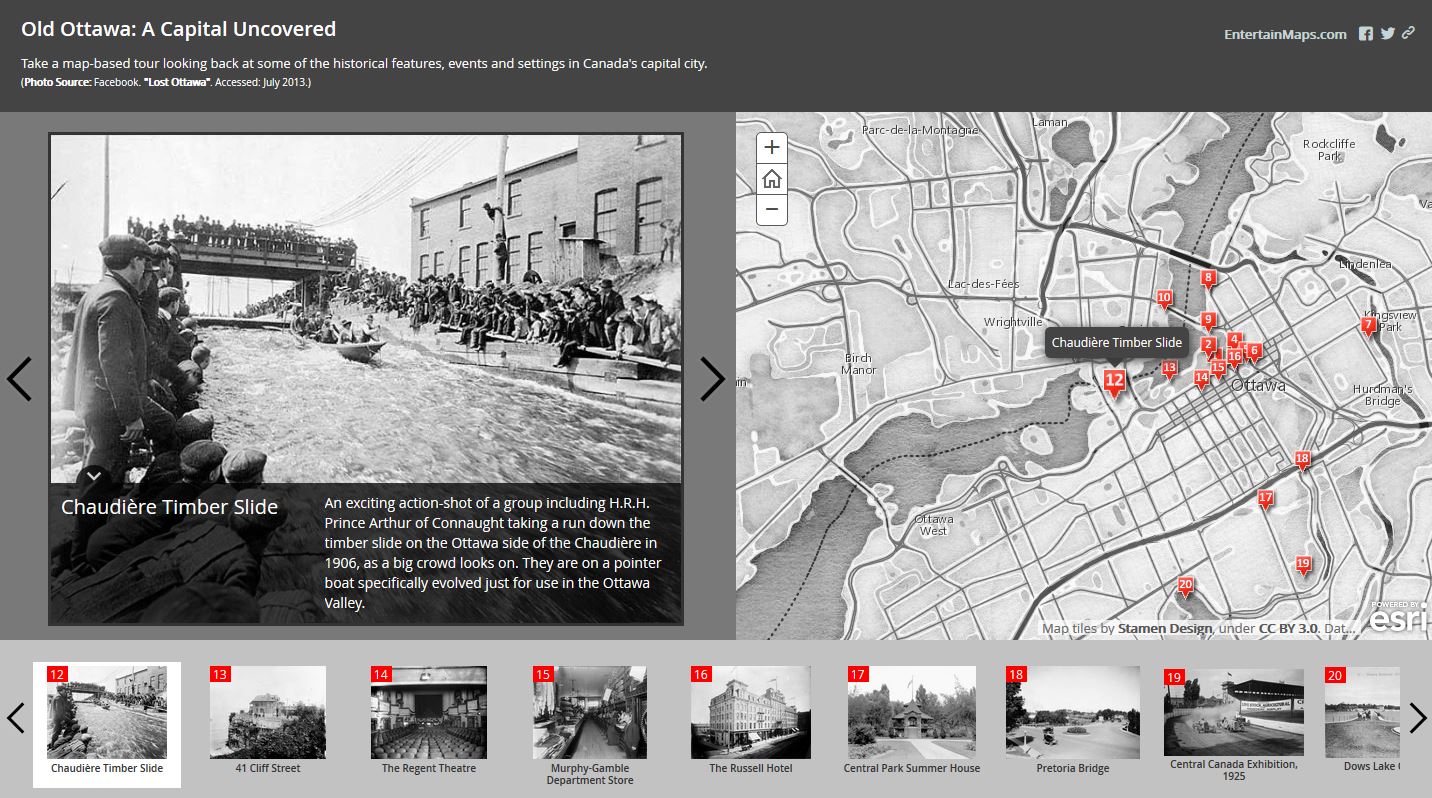 AB: The basemap has a great, antiquated look to it that suits the theme perfectly. How did you create it?
MG: That’s a custom basemap that I made using a web program called Stamen Map Stack. It allows users to take data from OpenStreetMap.org and then manipulate it in terms of its colour, transparency and texture. On the basemap for this app, I’m using a style called “watercolour” and I made it black and white so it looks like an old, dusty map.

AB: What’s the response been like for this map tour?
MG: It’s been somewhat popular. Right now it has over 3,000 views. It usually gets more views around Canada Day.

AB: Last question: what advice would you give budding story mappers out there?
MG: Think about your topic for a while before you actually make it. I think about mine a lot before I start working on them, maybe for a week or two. I would also encourage people to look at different examples before you make your first one. And spend time on ArcGIS Online learning the ins and outs of web GIS. Spend time looking at little snippets of code. Even though story maps are easy to create, I find the more time people spend learning ArcGIS Online and learning a little bit of HTML and Java, the better their story map skills will become.