Esri Canada’s very own Eric Melanson, director for the Atlantic Region, is about to embark on an amazing 13-day expedition to Mount Everest. Read this blog to learn about his preparation, research and how he will use the Collector for ArcGIS app on his cell phone in offline mode to collect data on his exact location and points of interest.

Esri Canada’s very own Eric Melanson, director for the Atlantic Region, is embarking on an amazing 13-day expedition to Mount Everest, beginning this Saturday, October 29, 2016. And to share this experience with everyone, he has developed a web app that will allow us to follow his journey. 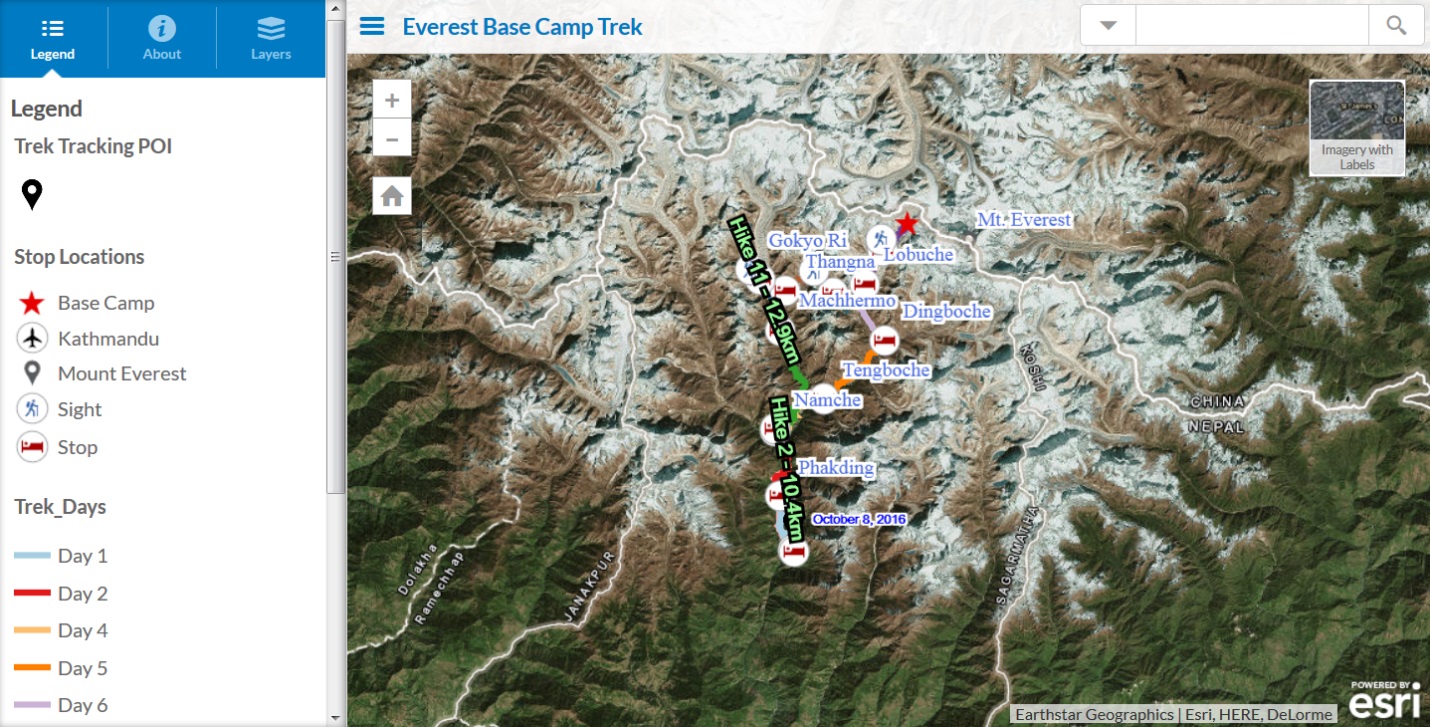 Eric’s Everest Base Camp Trek app shows the routes of the daily treks his group plans to take throughout their journey, as well as the locations where they’ll rest for each night. Users have the option of using the world topographic or imagery basemaps in ArcGIS Online to get more context for the daily treks.

The trek to Everest wasn’t necessarily on Eric’s bucket list. In fact, it took him over a month to decide if he really wanted to take on this impressive challenge. One tiny detail to consider – Eric struggles with acrophobia, a fear of heights. Just ask his wife, Melinda, who does all the work around the house that involves any kind of climbing heights. Eric also had to consider health factors as he had undergone a bilateral hip replacement 10 years ago, which could impact his ability to hike high altitudes for 6 to 7 hours a day for two weeks.

Alas, at 58 years old, passing up this once-in-a-lifetime opportunity was not in the cards for Eric. With strong encouragement from his wife, he decided to give it his best shot.

Preparing mentally and physically was essential for Eric. His first order of business was to get a good pair of hiking boots for the treacherous conditions. Eric’s squash partner and his brother, who originally proposed the idea to him, helped him prepare for the trek, accompanying him on several training hikes.

Eric on one of his training hikes with his dogs.

Eric spoke to several people who had done the trek in the past, which helped him gain some insight into what he should expect. He received some interesting tips: “merino wool is your best friend,” “always have emergency toilet paper” and “whatever you do, don’t eat the meat.”

In addition, he watched YouTube videos to get some visuals of the terrain.

“It was especially unsettling to see the April 2015 footage of the Nepal 7.8 earthquake that took up to 10,000 lives across the country with 18 lives being lost at Base Camp, but I refused to get discouraged,” said Eric. “This trek is a unique opportunity to do something really challenging in my life.”

Accompanying Eric are 8 other trekkers, as well as 2 local guides and 5 Sherpas, all with specialized knowledge of their own.

Eric’s GIS knowledge will definitely be a valuable asset during the trek; he’ll be using the Collector for ArcGIS app on his cell phone in offline mode to collect data on his exact location and points of interest. These points of interest, including photos and videos, will be updated to the web app whenever he receives Internet connectivity.

The Himalayas is home to 15 of the world’s highest peaks, with Mount Everest being the highest point on Earth. While Eric doesn’t plan to summit any of these peaks in this journey, he’s looking forward to experiencing some of their grandeur.

“I expect that this journey will open my eyes to the unique culture and stunning geography of Nepal,” he said.