The concept of value has always been a struggle for governments. Convenient, quantifiable measures like profit margin or market share don’t translate well for organizations tasked with protecting public welfare and serving the common good. As a result, governments have traditionally limited the question of value to utilitarian measures like cost control, customer satisfaction and fulfilled election promises.

The notion of public value, pioneered by Harvard professor Mark Moore, charts a different, more encompassing path. In his 2013 book, “Recognizing Public Value,” Moore describes how public value is not limited to services and election promises but is really about how well governments use public assets to achieve collectively valued social outcomes. This is described as a “public value account.”

A public value account is similar to a bank account. On the left-side are costs. This includes financial costs and the social costs of using authority (citizens generally don’t like to be forced to do things). On the right-side are benefits or valued outcomes. This includes achievement of the government’s strategic mission, satisfaction of clients (both the beneficiaries of services as well as those obliged to use the system) and the creation of a just and fair society.

What differentiates public value from value in the business world is the “arbiters of value.” This means those who determine the worthiness of the enterprise. In a profit driven world, its primarily the customers we’re concerned about. They buy the product or service based on what they are willing to pay.

For governments, it’s more complicated. Sure they are concerned about customers, but they also need to consider a host of other stakeholders with differing perspectives on value.

Consider the tax payers who fund public services but don’t directly benefit from certain public services. What do they get out of it? And what about residents forced to use the system, like those currently lined up at traffic court? They would probably avoid the situation all together, so how do we account for value in this way? The public value account factors in the unique value perspective of different stakeholders in a way that produces a holistic view.

A completed public value account provides a clear picture of the value being pursued on their behalf of the community. This clarity is important. Governments that align their vision of value with the values of the community gain democratic legitimacy and support. This provides the social authority the government needs to direct resources to various public services and initiatives. From there, attention can turn to the real work of delivering on those commitments.

In essence, Moore suggests that effective governments work to optimize the link between public value, legitimacy and support, and operational capacity, which he refers to together as the “strategic triangle”. 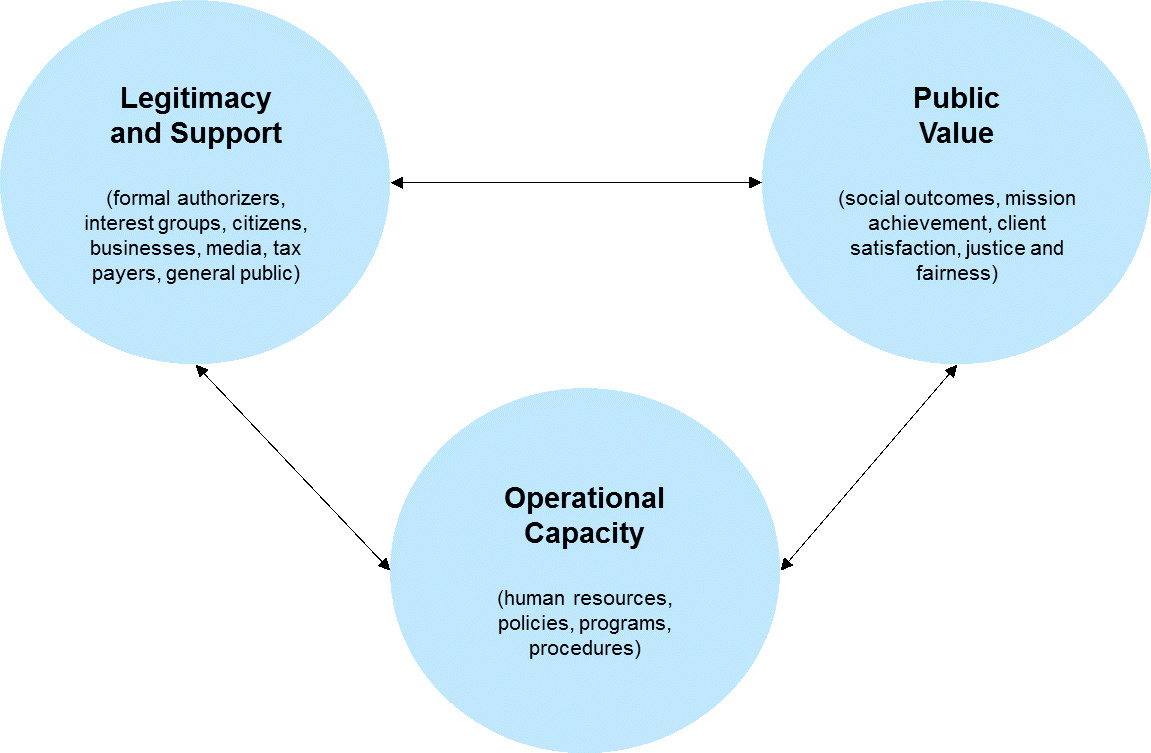 The challenge for governments is engaging the public and delivering programs in a way that creates a virtuous cycle of value, support and capacity. The City of Los Angeles addressed this issue through the creation of a “geohub.”

A geohub, also known as a digital hub, enables both public engagement and organizational collaboration. Essentially, a digital hub connects the public with the governments that serve them and links government departments to each other.

At a more practical level, digital hubs are platforms for key public initiatives. Through a digital hub, governments provide the public with access to relevant open data, maps and applications. Internally, government departments are provided with a platform for sharing information and working together on high priority, government-wide initiatives. The effect is a system that drives the public value cycle.

Los Angeles’ Vision Zero initiative is a great example of public value driven through a digital hub. The initiative’s mission is to eliminate all traffic fatalities within the city by 2025. Here’s how it addresses Moore’s strategic triangle.

Public Value. Zero traffic fatalities is an easy sell on the surface, but only if achieving this goal doesn’t result in undue hardship to the citizenry. The vision zero hub helps to address the costs and value of the initiative.

Aside from transparency on the financial costs, the vision zero hub helps to reduce the social cost of using authority. Perception of big brother is a challenge in initiatives like this, so providing a platform to consult with the public and encourage (rather than force) street safety behavior is a necessary step.

On the value side, the vision zero hub not only shows progress toward zero fatalities but also shows corresponding improvements in city transit access and other related public services. This is an important consideration as the message around vision zero is reinforced through the knock-on effect of improved services.

The vision zero hub also helps to promote social justice in the community. The public is given open access to data and applications that allow users probe the relationship between traffic deaths, income inequality, access to public transportation and public health (to name a few).

Legitimacy and Support. The extensive public engagement channels provided through the vision zero hub help to cultivate support for the initiative. This is true for the citizens of LA and any other groups with a stake in the transportation system and the vitality of the city. This includes local businesses, government employees, media, the court system, tax payers and politicians.

For instance, safety advocates can view collision reports, and community development groups can assess the relationship between traffic injury and economic conditions. The case for vision zero is built on many fronts.

Operational Capacity. Value and support mean nothing if the city doesn’t deliver. This means realizing the promise of vision zero, but it also means being a responsible steward of the city’s resources. The vision zero hub provides a platform to manage and communicate performance.

Targets and actuals are (or will be) reported regularly through the site’s multiple channels. This includes trend maps of the collision landscape and access to raw data relating to street traffic, traffic injury, traffic intersections and many others.

Other great examples of digital hubs in action include the City of Long Beach and Loudon County Virginia.

Digital hubs offer a compelling platform to help governments connect with the public and deliver initiatives. When designed with a focus on public value, public support and public delivery, they are an indispensable tool. Governments and the public alike will reap the rewards.