The World Meteorological Organization says that 26 of the 50 essential climate variables can only be effectively observed from space. GHGSat, a leading-edge Montréal-based space and data technology company, is the first to use satellites to monitor greenhouse gases. Adina Gillespie, GHGSat’s director of business development, explains how it works and how Esri technology fits in.

Countries are being asked to cut back their emissions.

Companies will be fined if they exceed certain levels of greenhouse gas emissions.

For companies to reduce their emissions, they must know exactly how much greenhouse gas they emit. An innovative and effective way to do that is to use satellites. The federal government has decided that one Canadian company is ideally suited to this: GHGSat, a Montréal-based space and data technology company that is the first company in the world to have satellites in orbit that can monitor greenhouse gases at a facility level.

Today, they have three satellites in orbit. In 2022, they’ll launch three more satellites, and five more in 2023. Most satellites pick up emissions from a rather large area, but GHGSat’s satellites focus on industrial facilities, which is a crucial level of detail for mitigating emissions.

GHGSat is scaling up quickly because they’ve got the technology and they’ve raised private and public funds to make it happen.

At COP 26, the Canadian government announced that GHGSat will be contributing the first high-resolution satellite dataset to the International Methane Emissions Observatory, an independent, international hub for collecting and verifying methane emissions data. Methane is a powerful greenhouse gas and short-lived compared to carbon dioxide, so making significant reductions would have a rapid and demonstrable effect on atmospheric warming. The Canadian government is also supporting GHGSat with $20 million from Sustainable Development Technology Canada, a fund that enables what they describe as “clean technology trailblazers”, those developing and demonstrating new environmental technologies that address climate change.

To understand how Esri technology fits in, we invited Adina Gillespie, director of business development at GHGSat and self-described geography nerd, to come on the Esri Canada podcast, Geographical Thinking. You can listen to that conversation here.

Adina Gillespie has worked in applications of earth observation technology for a long time. She started her career with an undergraduate degree in geography from McGill University and went on to study remote sensing—the science of using satellite or aircraft imagery for environmental and other applications—at the University of Waterloo. 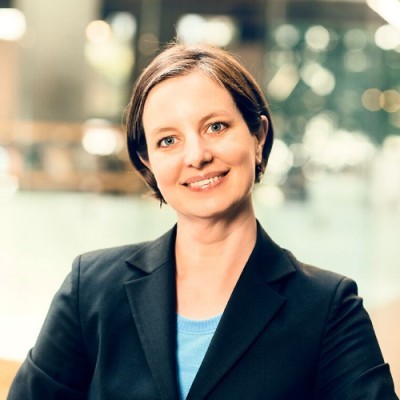 The Canadian Space Agency became interested in her research and encouraged her to go to the International Space University in France, where she found people interested in everything from space travel, to space elevators, to the use of satellite imagery.

Satellite imagery became her specialty and since then, she’s worked on some exciting and impactful projects. “One of my previous companies delivered the very first satellite imagery that came out after hurricane Katrina. We also delivered imagery that was used in Nigeria to identify relief camps for displaced villagers during major floods,” she recalled.

Although she found her previous roles rewarding, GHGSat really excited her. “It was the first time I'd ever seen a company actually use its very first satellite for more than a technology demonstration, but as a real commercial operating satellite.” Now, she says, “in terms of impact per unit effort, it’s the best job I’ve had.”

“What we know in geography is that data of all kinds are needed to answer the big questions of our time,” says Gillespie. Geospatial data and analytics are a big part of turning the satellite data into actionable insights. “We could measure emissions where they originate, on the ground,” she says, but this infrastructure “is very expensive to deploy and maintain, especially in remote areas”.

“You need satellites to access places you wouldn’t be able to otherwise,” she says, and they “allow us to capture a global picture”. GHGSat staff combine data from aircraft as well as available space and ground data, which means they are working with big global datasets. “By combining these things, we get a full picture. Operators and the governments need to see that holistic picture as they work to meet their net zero targets over the coming years,” says Gillespie.

GHGSat’s decision to use Esri technology to underpin its geospatial service came down to the fact that the tools are simple. “We don’t need to complicate things for our customers,” says Gillespie. She also notes that “if you’re a government user and you want to understand what’s going on, we need it to be simple. Esri [technology] allows us to do that.”

Connecting various stakeholders around climate change is rather delicate. It’s called “climate diplomacy” and a company like GHGSat sometimes finds itself in the middle.

“In the early days, with our first satellite, we’d spot emissions, and we’d knock on the door of the operator to say, ‘Hey, we’ve seen this thing from space.’ It was usually a bit of an awkward conversation initially,” Gillespie admits, but once those operators realize that GHGSat’s business objective is not to name and shame organizations, but rather to work collaboratively to address the methane leaks, they come around. This collaborative, more diplomatic approach of working together with operators and governments has been successful.

Sometimes a discreet approach works best between governments. “We’ve had governments knock on the doors of other governments and say, ‘this is what we’re seeing in the satellite imagery. Let’s work together to fix it,’” and as Gillespie notes, “that’s not always best done in the public eye.”

Scientists who’ve worked on greenhouse gas and climate change their entire careers were a little reluctant towards the Canadian start up, but now GHGSat works with them, sharing information back and forth. It’s also part of the reason Gillespie is based in the UK.

In 2008 the UK passed the world’s first Climate Change Act. In 2020 the European Union issued a methane strategy. Many climate mandates in recent years require that a state cut its climate-damaging emissions to zero by a specific date. Environmental, social and governance rules are becoming a strategic business imperative with the environmental impact of financial investments and becoming more important to investors.

“My vision for the business broadly is that we’re delivering not just to the operators, but to governments that are stepping up to understand sources of data and evidence of emissions,” says Gillespie.

When Gillespie taught climatology at the University of Waterloo in the early 2000s, she says they had to search for climate stories. Today, there are hundreds of new climate stories, because people are paying attention and they care.

“We’re the first, but we won’t be the last. There are more organizations bringing new technologies to help with the net zero challenge. I think it will be a busy place, but I don’t think it needs to be aggressively competitive because everyone wants it, and everyone needs it,” says Gillespie.

And she means everybody. On their website, GHGSat offers a free-to-use map that helps you see concentrations of methane worldwide. Called “Pulse”, it’s designed to raise awareness of, and support discussions about, methane. It shows what methane emissions look like on a two-by-two-kilometer grid across the world. The hope is that making this kind of (not always easy-to-understand) data available in a user-friendly way will engage people.

And for Adina Gillespie, the more the merrier.

“Answering questions with geospatial data is great, but having the impact requires more than singular approaches—more than geospatial scientists and more than the technology and more than the policy makers—we all have to work together on this,” she says. In other words, responding to the climate emergency requires all of us.

To learn more about GHGSat and their incredible work, listen to our full interview with Adina Gillespie on your favourite podcast app.