The ultimate purpose of a Spatial Data Infrastructure (SDI) is to share geospatial data between geographic information systems (GIS). To share this data, technology is required; and, as technology improves over the years, so should the SDI to the point where data exchange becomes really efficient––flawless and seamless. The Canadian Geospatial Data Infrastructure (CGDI) has developed over time and some of this advancement is due to technology improvements. Read this blog to find out how technology is helping geospatial practitioners improve data sharing.

I recently attended and presented at the GeoAlberta Conference in Edmonton. At the conference, it was interesting to get a slightly different perspective on geomatics activities in Canada. A notable speaker at GeoAlberta was Dale Lutz, co-founder and vice-president at Safe Software, who gave a very engaging presentation entitled “From Diskettes to Data Lakes”.

During the presentation, Dale showed an old picture of himself (probably from his university days) operating a keypunch machine. As I was sitting beside a colleague in his 40s, I asked him if he knew what kind of machine Dale was operating in the picture. My colleague looked closely at the picture and remarked that he had no idea what the machine was, which was not surprising as keypunch equipment has been obsolete for decades.

Dale showed some pictures of other old or obsolete products as well, such as 9-track tapes, and floppy, CD and Blu-ray discs, all of which were state-of-the-art storage technology once upon a time. It got me thinking about how quickly the once “ultramodern technology” can completely disappear from use due to innovation.

However, SDI innovation is occurring in a slightly different manner than computer storage progression. SDI technology is primarily based on network hardware, which has improved significantly in performance over the past decade. Unlike storage technology, the SDI technology has only witnessed a migration or upgrade to newer technology rather than its complete overhaul. In networking, newer technology is often backward compatible with existing systems, which has helped maintain interoperability despite the modernization.

Over the last decades, SDI has seen several stages of progression such as the desktop, network, web, enterprise and heterogeneous SDI phases. 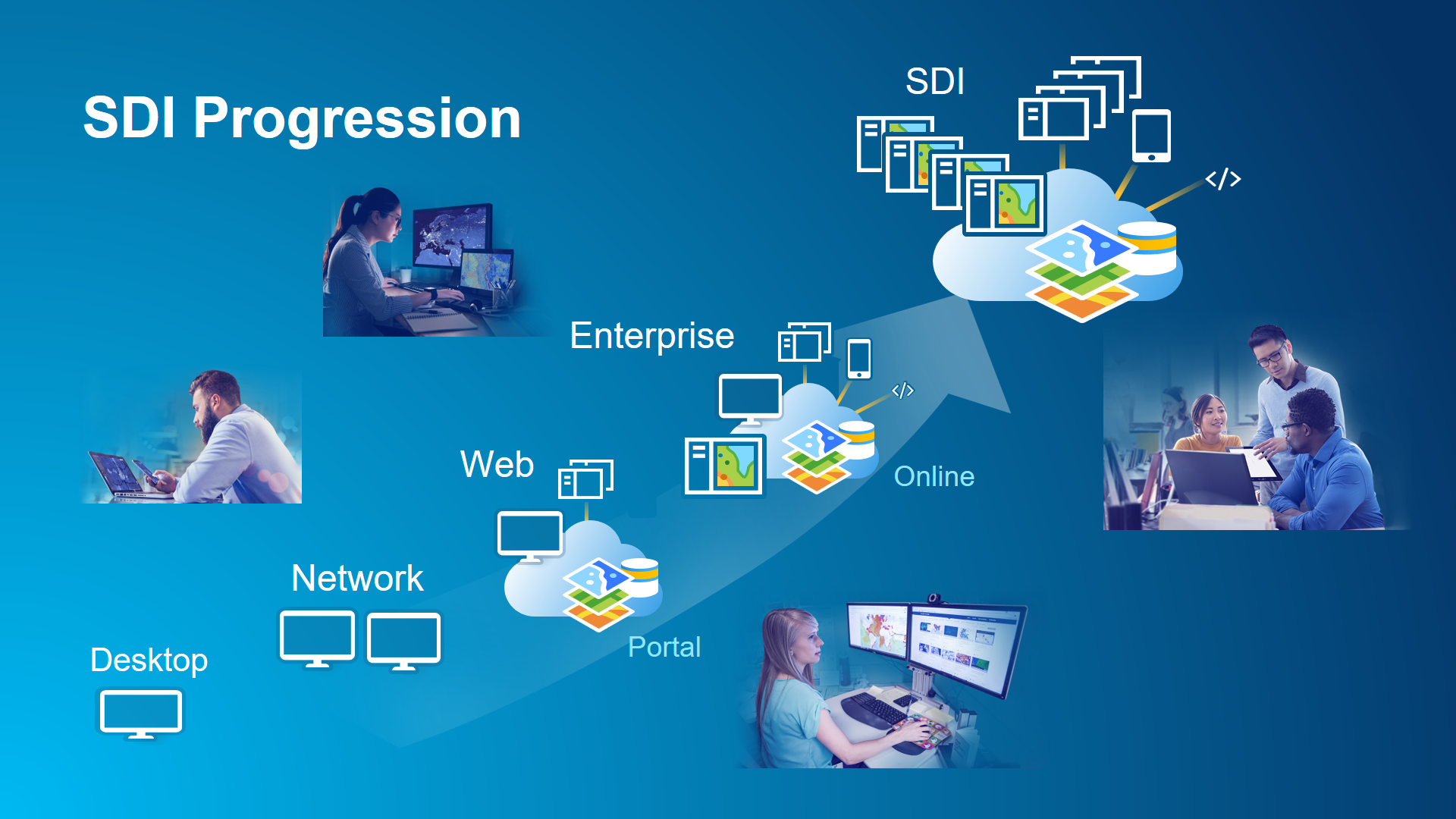 Here’s a slide from my presentation on SDI Progression at GeoAlberta. SDIs were conceived at the time when most GIS users were using desktop systems. However, GIS pioneers, such as Roger Tomlinson, were likely using keypunch technology back in the 1960s as desktop computers were not yet available.

So, what is this SDI progression? When computer networking such as ethernet was developed, it allowed computers to exchange data electronically. However, with the development of the Internet and web in the 1990s, users could share geospatial data across systems and around the world. Currently, Enterprise SDIs provides efficient and effective geospatial data sharing within an enterprise such as a company, business or government. As we progress further, a fully heterogeneous SDI that will allow data sharing without interoperability challenges with users across the globe is still some ways off but in the works.

During each phase in the development of SDIs, there are a number of components that need to be addressed. Here are a few examples: 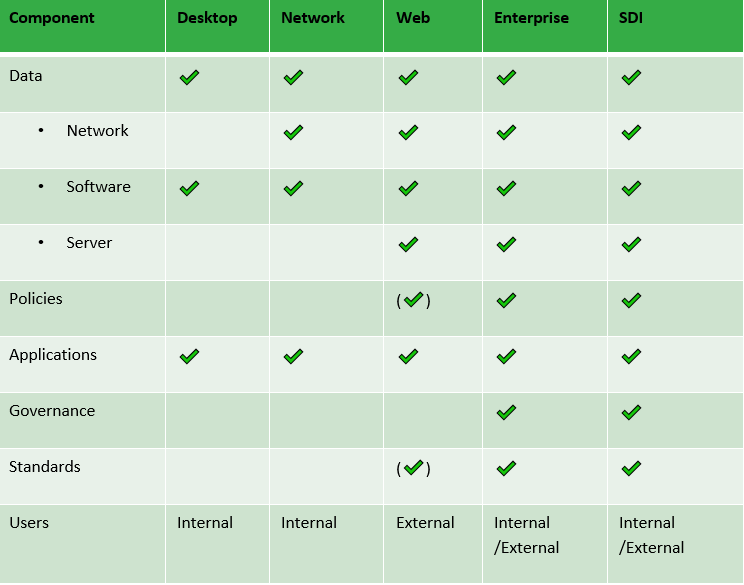 This table indicates what components are deemed important for implementing the different types of SDIs.

While most organizations are currently at the web stage in the development of their SDI, many progressive organizations are implementing enterprise SDIs. This will allow all departments and internal users of geospatial data to easily share maps, content, analysis, solutions and tools. For example, the police, public works, transportation and planning departments in a municipal enterprise SDI would all be working from the same base geographic data and solutions.

The development and implementation of SDIs is becoming more common as technology improves. Each SDI needs to be interoperable with other SDIs to be useful to both internal and external users. The transition from one stage of the SDI progression to the next can be managed in a way so as to minimize disruption, maintain and improve services, provide additional capabilities for users, improve efficiency, and reduce costs.

While a lot has been done to develop SDIs to their current state, there is still more to do to make heterogeneous SDIs available and interoperable across Canada and throughout the world.